You can order the 7D download video, which also covers the 5DmkII from this page and get 20% with the Christmas promotional code of “starwars”

A follow focus is one of those bits of gear that a lot of people want but can’t afford. I use a Zacuto one for my DSLRs and my 35mm adaptor and it works superbly, but it’s not within the price range of the keen amateur, hobbyist, student or broke professional! So what do you do? Well you can always focus off the barrel of the lens. This is fine for a lot of handheld work and actuality but for narrative work and controlled focus pulls there is nothing better than a follow focus because you really want to take the hand off of the lens otherwise you introduce vibration into it and your focus pulls aren’t as steady or rarely as smooth. Both of these products were supplied to me as review samples.

First off is the incredibly cheap D-Focus V2, made by David Aldrich and distributed by Jag35. I first my Dave when I did the Joshua Tree short film on the GH1. He and the Jehu Garcia came along to hang out and I saw his V1 of the D-Focus. This V2 is a lot better than that one! Really nice guy and one of the new breed of entrepreneurs out there making really cheap accessories for this affordable cameras.

The key thing about this follow focus rather than the other one I am reviewing in this article is it’s use of industry standard parts. 15mm rods, standard 32 pitch gears…so it will work with your other gear. Generally follow focuses need to be mounted to the camera using a rod system. I still recommend rods as they are the easiest way to mount a follow focus and can be used for a matte box and other stuff but Dave has come up with a budget DSLR plate for $50. So couple that with the price of the $120 follow focus and you really have a budget set up here…and it works. 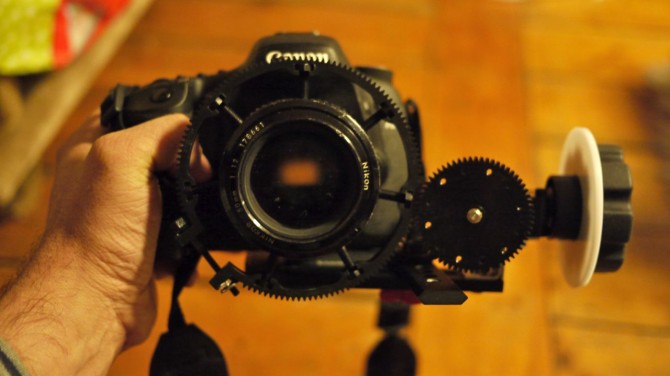 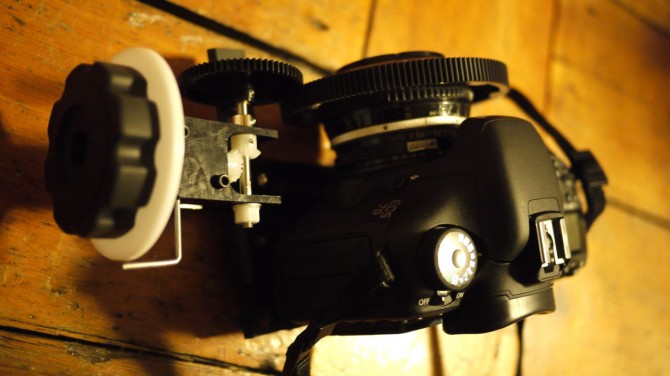 Unfortunately that’s not all you need, with a gear based system you need…lens gears…until now Dave was using Redrock ones, but he and Jag35 have come up with their own lens gears and they are again dirt cheap! Way cheaper than the old Redrock ones they used to recommend. Redrock ones are $160 for 3 lens gears. The Jag35/ D-Focus ones are $30 dollars each. The great thing about these gears is that they are adjustable for difference lens barrel diameters. When buying a Redrock one you buy one for the size of the lens. What Jag35 and D-Focus have cleverly done using screws is made the diameters adjustable with 4 different size screws that attach to the inner part of the lens gear changing the size of the lens gear. Theoretically these gears should be usable with other follow focuses. You can just buy one and switch between lenses but it’s not worth the hassle. At this price buy one for each lens. Taking it off and changing size is not super fast so best to leave them on…also even if you aren’t using a follow focus having the gears on help you focus manual easier too. 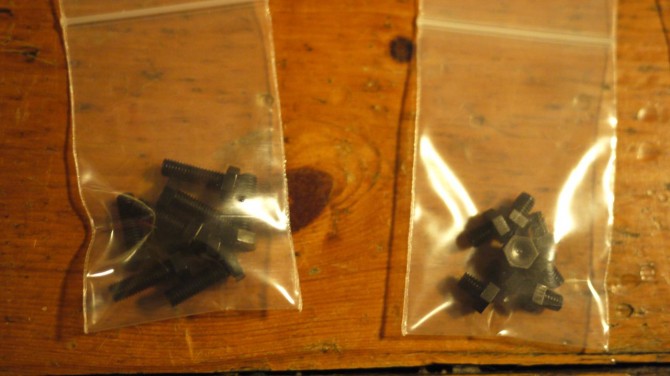 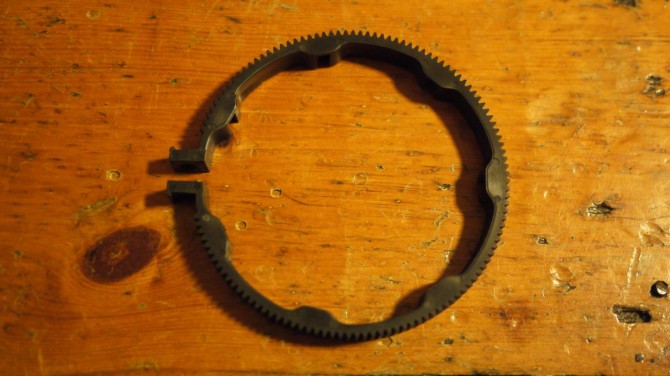 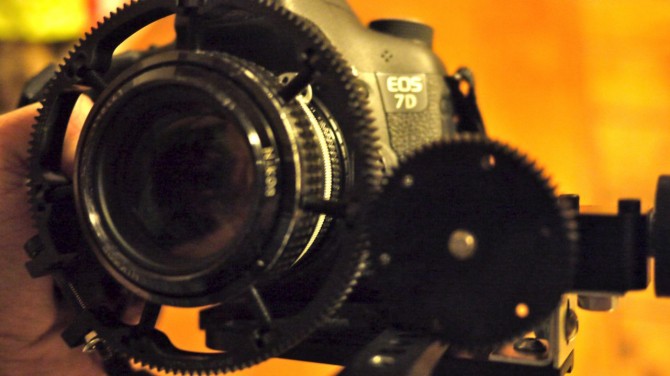 The DSLR plate works fine. It’s nowhere near as good as a proper rail system but it’s a lot lighter and a lot cheaper. When you want to move the D-Focus into a different position for a different lens using rods you just slide it along, with the plate it’s a little bit more fiddly, undoing a bolt, moving part of it, lining it up and then tighten down. As I said, not as good as rails but a great cheap alternative. 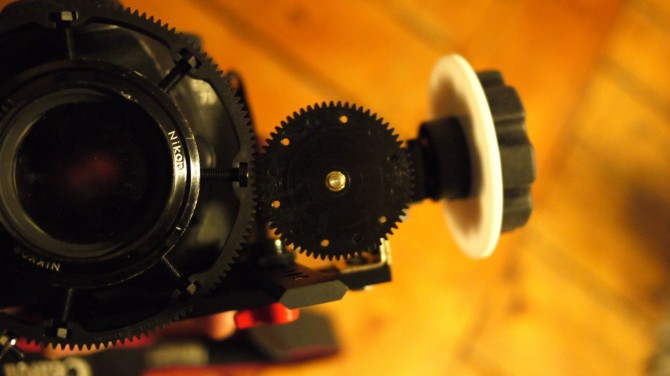 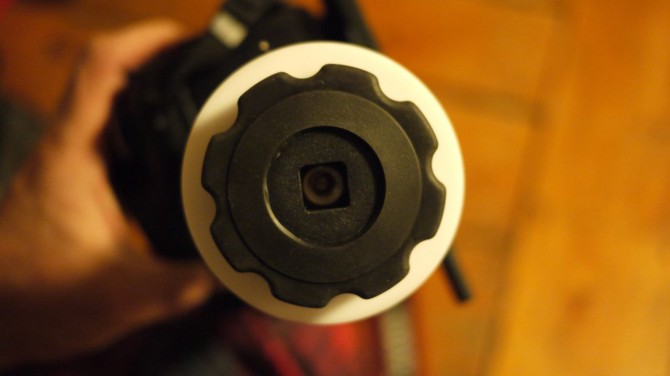 The design of the follow focus wheel is nice and chunky, it has the optional (but essential) marking disc on it above. It also takes standard follow focus cranks and whips, am sure these guys will be bringing out their own one soon too.

It’s a really affordable piece of kit, way cheaper than anything else out there and the huge advantage of it using standard sized gear means you can use it with other gears, other follow focus etc…

It works pretty good. It’s not perfect and I wouldn’t expect it to be for the price. The follow focus system I use is close to about 8 times the price but has taken a lot of beating from me day in, day out and is utterly smooth with zero play. I found this one to have a little bit of play in it and not as silky smooth as I would like and as everything is exposed I would treat it gently. I wouldn’t call it a pro piece of gear as I don’t think it could take the daily punishment pro gear is put through.

So of course it’s going to have downsides but if you want a follow focus and are on a budget there is nothing that comes close to the D-Focus V2.

I am going to give it the following marks out of 10.

Build quality: 6.5 Compromises have be made to keep the price point low

Ease of use: 7 A bit fiddly with the DSLR plate

Value for money: 10 Nothing else out there that come close to this

Overall: 8 People say you get what you pay for, well I think you are getting a lot more than you pay for with this. It’s an absolute bargain. Will I switch from my expensive follow focus for this? No. But For anyone starting out this is a terrific way to get into the great habit of using a follow focus the professional way. Oh, one more thing. There is nothing stopping you using this with a depth of field adaptor like the Letus or Jag35.

Here a couple of helpful set up videos from David. 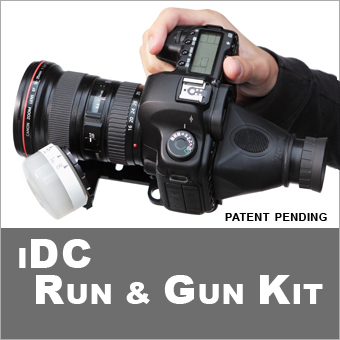 I saw someone with this when I was down in Venice Beach and it really intrigued me, then I saw that Rick McCallum from Lucasfilm has one so I had a play with it and liked it. I contacted IDC and they kindly supplied a review sample of the 7D and 5DmkII version (there are slight differences so make sure you order the right one).

First off this is not a traditional follow focus by any means. It doesn’t use gears…it uses a modified skateboard wheel!

Again using a plate similar to the D-Focus DSLR plate it attaches to the bottom of you camera and the wheel pushes hard into the lens focus and you simply turn the wheel to focus. That’s it really! It works really well with my Canon lenses which have loose focus barrels, I did try it on the same 50mm old Nikon lens I used for the D-Focus above and it struggled as the focus is a bit stiff. It relies entirely on friction to work and if there is too much resistance from the lens it will struggle.

The Run & Gun kit comes with a modified Hoodman Hoodloupe. Now I have reviewed to Hoodman before and said it was OK. Just OK as it had no proper way of mounting onto the camera other than bands and there was no magnification. I find it essential for any loupe to magnify the 5d/ 7d screen to get focus. The Z-Finder magnifies 3x to give you 100x screen in your eye. Yes it’s blowing up pixels but it makes focusing a hell of a lot easier. This Hoodman does not do that. No magnification, just a macro lens. So yes it works but I don’t recommend it. What IDC have very cleverly done is modify the Hoodman so it attaches to the plate and is held in place against the LCD screen firmly. 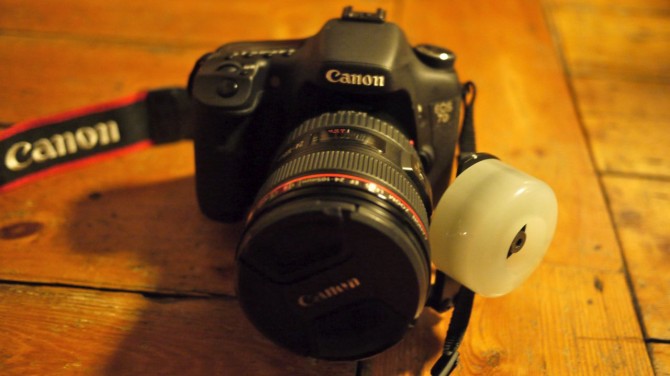 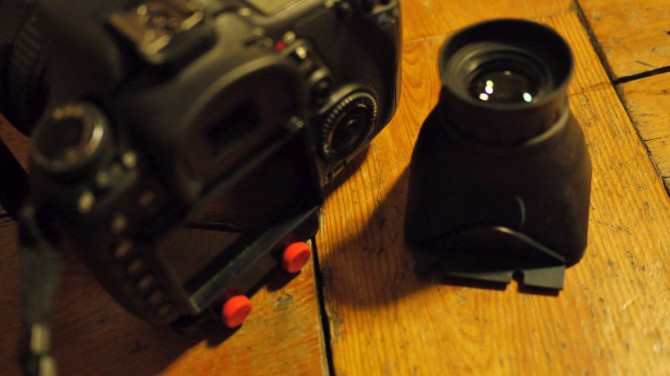 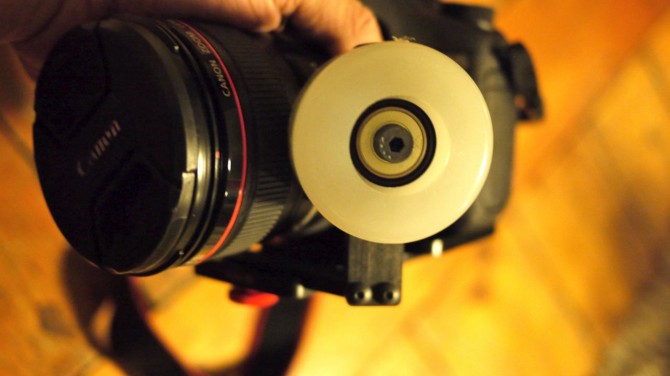 It’s a peculiar beast that I dismissed upon first viewing, but after using it am surprised at just how usable it is. It makes focusing a lot easier than off the barrel as it takes vibration away from the barrel of the lens just like any follow focus. It doesn’t use gears so you save money on that and doesn’t use rods. It’s basically a follow focus device for people who have no desire for a pro follow focus device but want to be able to focus better and this does that superbly.

The Run & Gun kit costs $488 but I don’t recommend that, as I really am not a fan of that hoodloupe…although it is better than nothing, You need a loupe that magnifies, like the LCDVF or the Z-Finder V2. Buying the follow focus without the viewfinder costs $358 so the Hoodloupe is costing you $130. If you don’t have one as I said it’s better than nothing but I do recommend looking at alternatives. The Follow focus itself is pretty good and works a hell of a lot better than it should!

I am going to give it the following marks out of 10.

Build quality: 7.5 No complaints, seems pretty good, but without any long term testing it’s hard to mark this one.

Ease of use: 7.5 Piece of cake..no gears means less fiddly but not as accurate as a proper follow focus.

Value for money: 7.5 For what you get it’s pretty good, whether you go for the viewfinder option or not.

Overall: 7.5 It’s not a proper follow focus so if you are looking to get into proper pro gear this is not it. Look at the D-Focus. But, if you just want to be able to have the ability to focus nice and easily this is very good and gets the job done. The skateboard wheel is very soft so I can’t see who it can damage the lens in any way by pushing against it all the time.