UPDATE: I was lucky enough to be invited round to Robert’s house this afternoon during the SxSW festival and saw the almost finished edit of this music video and very nice it is too. I also showed him my one of Celeste from Monarchs singing “Miles away” which he thought was great. You can see that here. His video should be on VH1 in the next week or two…

Robert really enjoyed shooting with the 7ds, he said it took him back to his El Mariachi roots and was really happy with the end results. He loved the ability to just jump out and grab the shots in a short period of time, switching between the big sniper rig and the simple Zacuto Z-Finder rig.

A really nice guy who was a pleasure to meet. 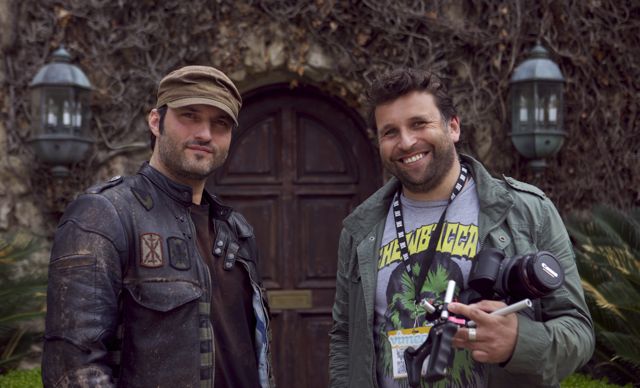 Big thanks to my friend Danny Dale whom I met in Austin last year who was out with his GH1 and family at Zilker Park in Austin at the weekend when he camera upon a film crew. It was an open set with just a warning if you walk past this sign then you give permission to be filmed. 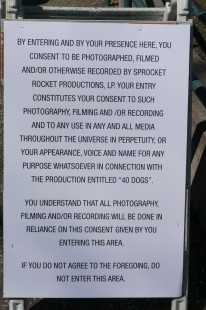 He saw the camera and immediately his eyes lit up. A super pimped up Canon 7D with none other than Robert Rodriguez. They were using 7D. Both pimped up with Zacuto gear. One just the Z-Finder and one with a mo-fo pimped up crazy ass Sniper Rig.

This is uber geek cool! Not TMZ territory. Don’t worry I won’t be doing a blog on Lindsay Lohan seen partying till 5am with Paris Hilton (unless they are filming each other on pimped up 24p 5DmkIIs or pre-production Scarlets!!) 😉

This is from Danny….

I walked into the area where they were filming and immediately was drawn to the HDSLR rig they were using. I pulled up my cam and starting shooting some pictures of it (I was about 15 feet away and realized it was a Canon 7D – wireless follow focus, Panasonic monitor with hood, and Zacuto grips/rails) when a guy politely walked over to me and said “we are trying to keep a closed set” – there was no security, just 2 camera operators, a tethered production cart, makeup, 2 HPX 170s filming BTS, and a few grips. I said I was only interested in the rig, not the music artist being filmed (which I then realized was local favorite Bob Schneider).  The guy was cool and let me take a few more and I walked away. When I told my wife that one of her favorite musicians was filming a video, she ran up to the fence and started to watch and then said “hey, is that Robert Rodriguez?”… it was. At first I felt stupid for not realizing that it was him but the rig was huge and blocking most of his head. They were shooting with 2 7Ds  – the second only had a Zacuto Z-finder, and Robert took turns shooting on both.

Here is some info from DP of this shoot Jimmy Lindsay. Thanks for sending this to me Jimmy!

Jimmy Lindsey here. The man in the brown hat with the Z finder. I was Robert’s DoP on the ‘Bob Schneider’ music video (as well as his last feature ‘Machete’) and those are my 7D rigs at work. After seeing all the questions, I thought I might shed a little light on the subject. The rig Robert is using was set up to allow him to see an HDSDI image on a 7″ Panasonic onboard monitor while his AC (the insanely talented Sebastian Vega) pulls focus with a Preston FIZ from a 17″ Panasonic monitor. Very necessary as you know when shooting on a 200mm at a 2.8. The signal was split from HDMI to 2 HDSDIs using the Aja Black Magic powered by a Nebtek adapter and Sony M batteries. Both the Preston and the onboard were powered with a D tap cable and a Sony onboard battery. We also got some beautiful shots with my 50mm 1.4 and a lensbaby composer with single glass and plastic optics.

Thanks so much or all of your DSLR insight and your amazing footage.
I am a big fan of your work!

Check out the photos below, they are awesome! 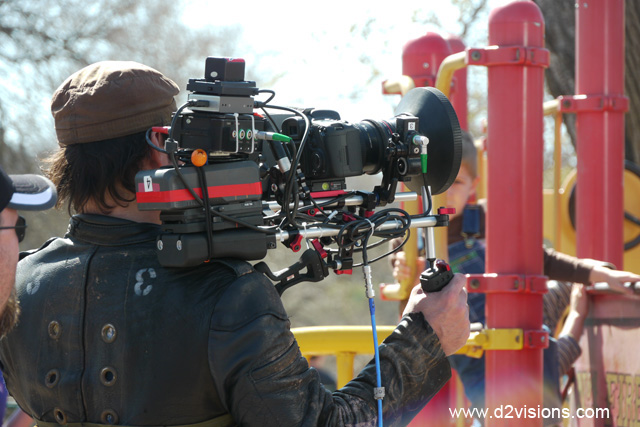 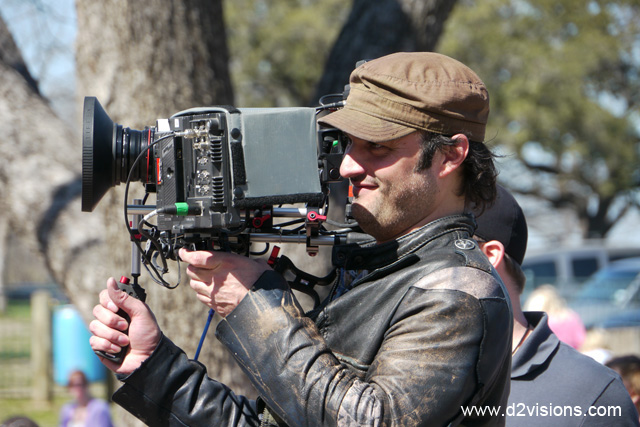 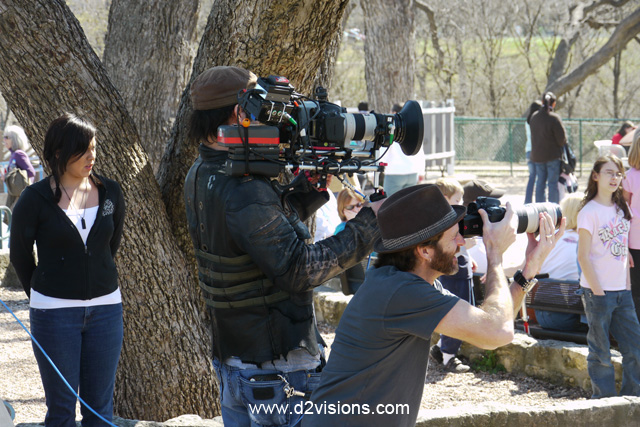 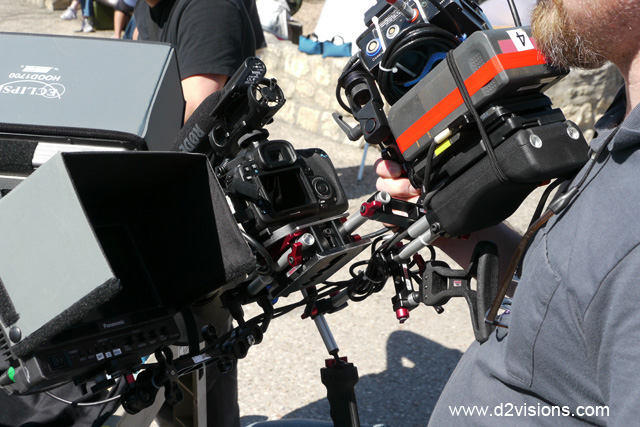 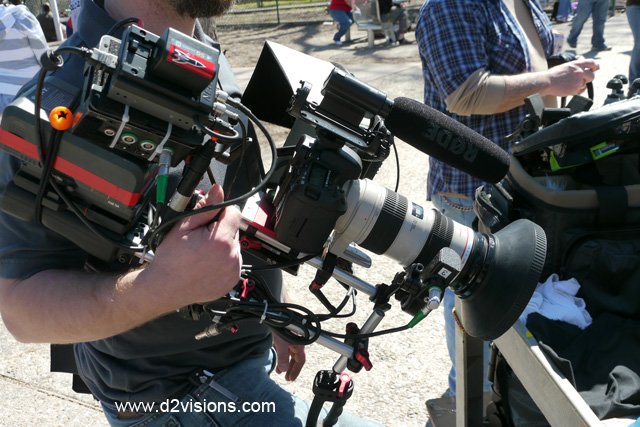 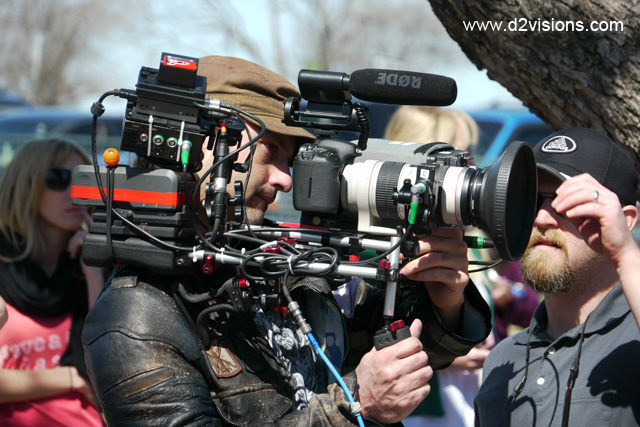 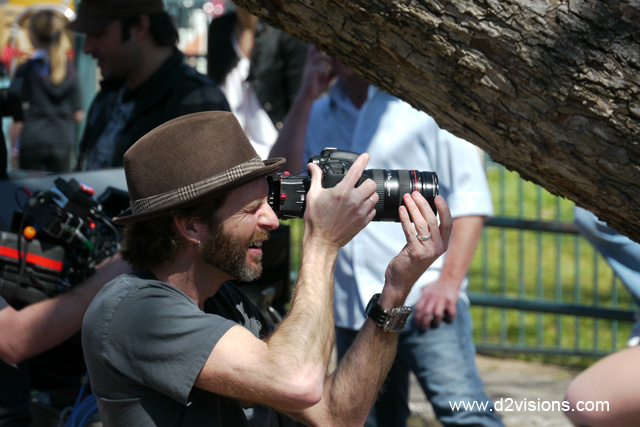 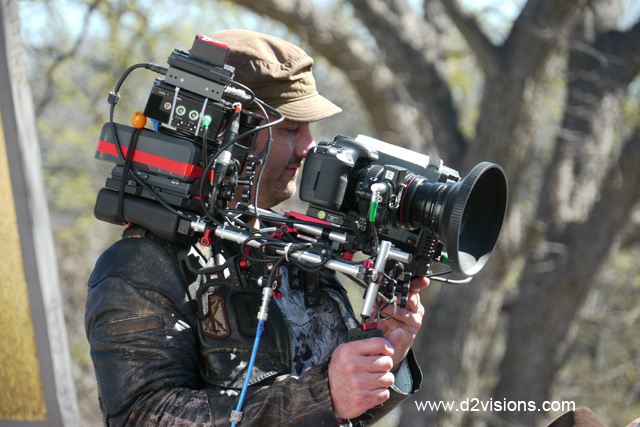 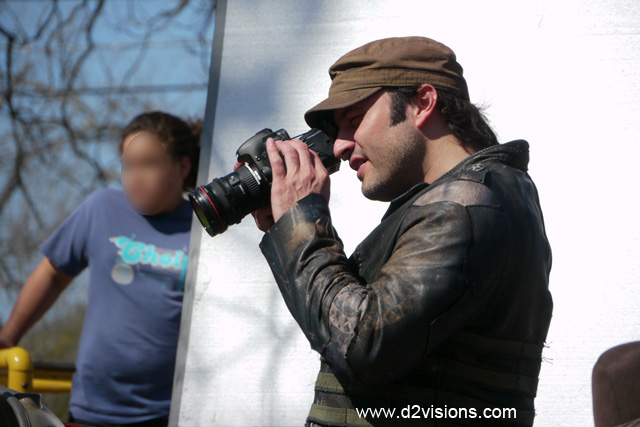 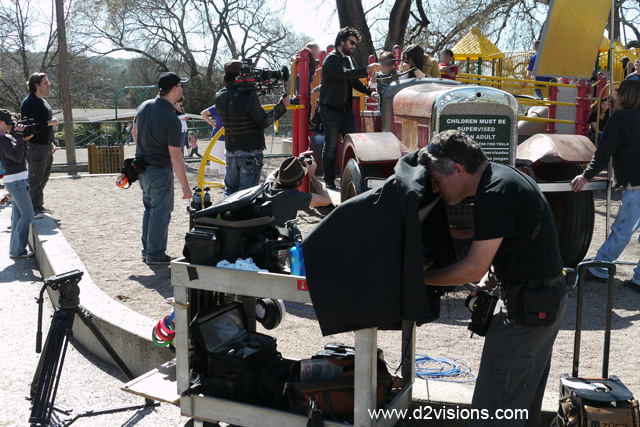