Zacuto’s Revenge Of the Great Camera Shootout 2012 is now LIVE!!

ETHICS STATEMENT: Zacuto have been my friends for many years and are of course one of my site sponsors. They are more than friends, they are my family.  Although this does not stop me checking out gear that competitors make. Competition makes you better! You can read more about this on my ethics statement here. 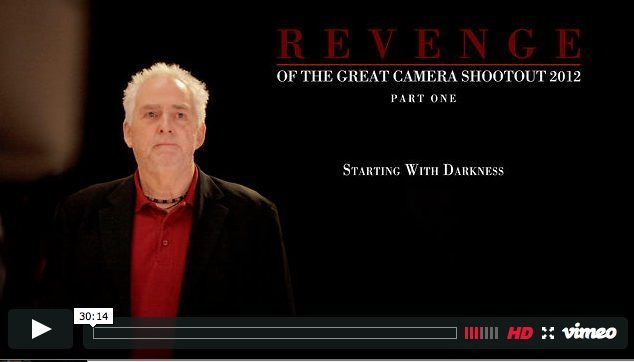 Shootouts eh? What is the point? Well we love them don’t we? I myself have done 3 or 4 half arsed fun ones where I pit similar cameras against each other. Why? Well for some it’s like sport…for camera geeks! Wanna see your favourite camera (team) thrash the opposition? Of course you do OR perhaps they are far more useful for you in deciding which camera to get. Well that’s where things get tricky. Looking at images and comparing them is only a fraction of what is important. A part of it, but far from all of it.

I have been involved directly in the two previous Zacuto shootouts but had to bow out of this one. Steve Weiss begged me. He sent me flowers, cars, women…anything he could, to convince me to do it. Unfortunately it was not about convincing, it was about conflicting schedules. I had a movie to shoot at exactly the same time, so with reluctance I had to sit this one out.

The problem with a shootout on the level that Zacuto does them is that the amount of work that goes into each one is enormous, and with the constantly changing landscape of cameras, they become out of date quickly. For example, last year the FS100 came out just after their SCCE test. A real shame.

How do you get past that? Easy, make the shootout not a shootout but something really valuable and educational, showing you can achieve with most of the cameras.

So in the test they took the following cameras:

7D (yes a hacked 60D would have been better)

iPhone 4s (for shits and giggles)

So a huge number of cameras. But not all the cameras out there. No AF100, no 5D, no Nikon D800. Why? It’s not a comparison shootout in the traditional sense. It’s a selection of varied cameras to represent each field. Yes there are no small sensor cameras apart from the iPhone. I would love to have seen the good old EX1 in there!

What Steve and Jens have made is a documentary of 90 minutes broken into 3 parts. The first of which is now live. Unfortunately for some, I am in it. Although I was not able to participate in the testing part, I was interviewed for the doc in Chicago last week and took the opportunity to get Steve and Jens to explain on-camera exactly what this “Shootout” was about. You can view the video exclusively below.

When I watched the screening of all the cameras, like everyone else I had to pick my favourite 3 images without knowing which was which. It’s incredibly hard to do and utterly subjective. Much of it is down to the skills of the DPs in lighting the scene and the colourist (who did all the cameras apart from the F65).

There was a lot of kerfuffle from a certain colourful CEO of a certain camera manufacturer about how this shootout was done, which Steve dealt with very politely, honestly and succinctly. I bloody love that camera and utterly respect the man. I miss my Epic like something you won’t believe. The irony is that what was complained about was of utter irrelevance in this test due to it not really being a “shootout,” and I actually chose the Epic as my favourite in the blind test. Why? As I said, I simply love that image and I can see it a mile off. BUT in this test you get to see how, with skill, a good DP can make a dirt cheap hacked GH2 look damn similar. As good? Of course not! I don’t recommend that Ridley Scott switches to the hacked GH2 for his Blade Runner sequel, after using the Epic for his spectacular and beautiful Prometheus, just because Dariusz Wolski is bloody brilliant. You would be tying a hand behind his back. What’s the point? A lot of it is down to the right tool for the right job. But great, if all you can afford IS the GH2 you know that with skill you can do amazing stuff with it.

Even though you can make a lower-end camera perform really well with skill, if you have access to a better camera, why handicap yourself? If you can afford an Epic in your budget and you have a crew who can light for it, then you would be dumb as hell to not use it! Likewise if you use the Alexa. Just look at how stunning Games of Thrones is and Drive was. The new bond film is being shot by the great Roger Deakins on the Alexa raw. Could he do a damn fine job shooting that movie with an FS100? Of course he could, but why would he? He famously said, when asked why he had never shot digital, that he didn’t want to use an inferior tool as he didn’t have to. Now with cameras like the Alexa giving him what film gave him and more, he is finally a digital convert.

I was recently asked on twitter: would I shoot a movie on the iphone 4?  I asked why. The response was: to see what I could do with it. My reply was that if I had to I would, but it would be damn silly when I have a Sony F3 with S-Log and Canon C300 sitting in my gear locker. But it depends on the job!

The documentary Steve had made (which is incredible, but don’t tell him that otherwise his unusually large head will swell even more!) will educate you. The people they have interviewed in it are some of the best cinematographers in the world, and then there is me 🙂 I clearly don’t deserve to be alongside these great names, and if I have a sound bite next to Janusz Kaminski then I can die today a happy man! I am not and never will be in their league. These are my idols. All I can do is try my best at what I do and strive to do better with each job. Like all of us in every aspect of our lives. Be it cameras or cooking!

If you asked me “Philip, happy birthday… you can have any camera you want on me. Which one will you have?”. My answer would be “Can I sell it or do I have to use it?” as if it’s the former then I’d pick the Phantom Flex as it’s very expensive – I would sell it to buy lots of other cameras. And if it’s the latter then probably an Epic, as I love the image and size of it and I already own a C300 which is my number one documentary camera. But hey, I have my Canon XA10 with me right now…why? It makes my life damn easy for what I am going to film here in Korea.

So really what I hope that you will get from the final documentary is that the camera is important naturally. But it’s what you do with the camera. Yes a better camera will make your life easier but as we always say,  the important thing is YOU!

Really Zacuto should not have called this a shootout at all. I know people like the name but it really isn’t a shootout. It shouldn’t have been called “Revenge of the great camera shootout 2012”  at all , it should be called something like “Sod the camera, learn to light you bastards and film something that captivates me !”…not as catchy is it? 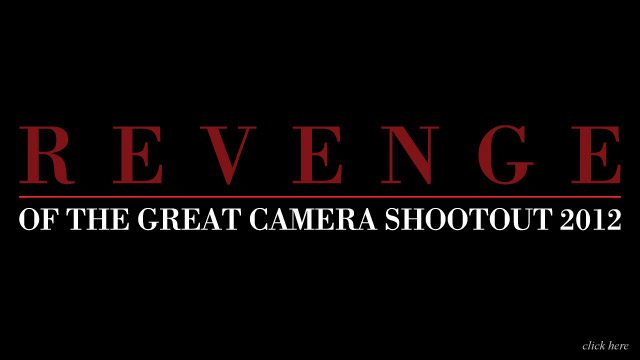