Cool new gear I am using or backing or just plain lusting after!!

There are stacks of new gear that have come out recently or are being funded via kick-starter. It’s been said before and I will say it again: Buying gear is not the most important thing, nor will it make you a better filmmaker BUT some of it can help you in filmmaking for sure, and some of this stuff is beyond cool! Some of the most innovative tools are coming from Kickstarter right now.

I am a big fan of projects on Kickstarter that are helping starts up and also giving you something back, a physical product. My biggest investment so far has been the Digital Bolex on Kickstarter. The only downside is there is less of a legal comeback if they don’t deliver.

Here are some of the most interesting ones currently still open to backing:

The Kick is a bloody genius idea for a pocket sized lighting tool. Check out the video below to learn more. I have invested in this. Looks fab. The features that are demoed in the video are beyond cool. 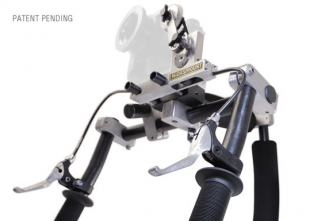 is one of the most out-there ideas for filmmaking accessories, but you know you what, I think it will work and will be a damn intuitive way of focusing via handgrips. Very clever and real “out of the box” thinking from these guys! I know it looks rather inelegant and looks like it was taken from a bike, but watching the video has really intrigued me. I have not tried this myself but my interest is definitely there!

is a really nice looking and well seemingly very well made lightweight jib. DSLR devices already have a small lightweight jib which is pretty damn nice and dirt cheap at £225. Is this any better? Only time will tell but I have backed it and look forward to trying it out!

The Genie is a motion control device. I like the panning aspect more than the way it attaches to sliders via rope to do time lapses, but it’s pretty clever and not a bad price. My biggest reservation on the genie is if you are just using it on a Kessler slider, you are better off just buying their basic motor kit; it’s cheaper and more elegant. If you don’t have a Kessler slider or want panning, this could be for you!

Non Kickstarter projects to check out below:

Triggertrap is a billiant little device and iPhone app for timelapse and much more. I just got this and have been trying it out. It’s very very clever! Check out the video. It explains it very clearly. The app is just under $10 and the dongle and cable are pretty damn cheap. Love the eased timelapse function!

The Alphatron EVF was announced a while ago and is made in conjunction with my favourite broadcast monitor makers TV LOGIC. I got a chance to have a fiddle with it in Korea last week, and I was very impressed with the LCD screen that looks pretty much like an iPhone 4s screen in its resolution as it is a 3.5″ “retina display”. It does HDMI and SDI in and out and crossover. It comes with a loupe which looks around just 1.5x, but with a screen of this quality it doesn’t seem too little. I didn’t get a chance to take it on a shoot, so a review will be on its way at some point I hope. Looks very interesting indeed! Bigger than the Zacuto EVF and pricier, we shall see how they compare soon! 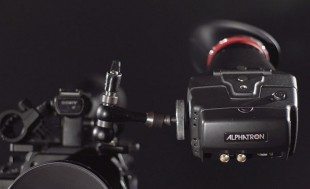 This is the only product here that I already own and it’s fabulous. It is the neatest most elegant solution for using Canon EF lenses on the Sony E-mount system, the FS100, FS700 (which I just took delivery of) and NEX 5/7. It controls the iris through the camera, powers the lens through the camera, supports IS and even works with the notoriously tricky 85mm F1.2L canon. I did have some issues on one of my long Canon lenses, the 100-400 so am investigating, but I believe it can be firmware updated. Whether this can be done at home or sent all the way back to Asia I don’t know. It is constantly out of stock from the official site, and they don’t take advance orders, but CVP in the UK are. A bit pricier though…These things fly out of the door as soon as they come into stock, and it is a seriously essential addition to your FS100/ FS700 if you own Canon glass. You can order it from CVP here. 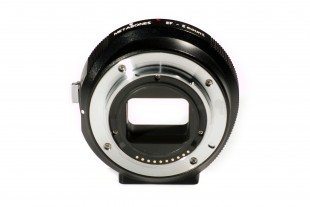