Social media, the news and the power of an image 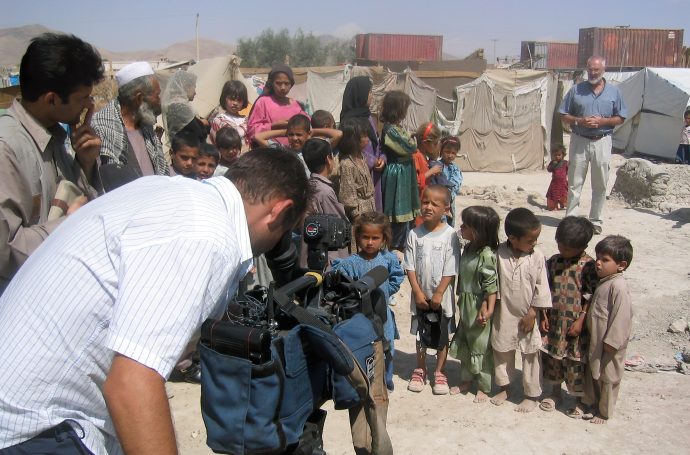 I rarely talk about my almost two decades in TV news, but I felt I needed an outlet today. It was prompted by something that happened yesterday, but this post expands into a much wider picture, although it will barely scratch the surface of a huge topic.

There was a photo posted yesterday by someone I know on social media; it was the image of the falling man taken by Richard Drew. It caused a lot of upset, mainly because the caption felt off contextually to the photo but also about using it in the first place. He later elaborated, which was good, although acknowledging and understanding why many were upset would probably have been a good move. But, I know he had no intention to shock or upset people and most certainly not doing it for likes.

It made me think hard, not just about that image but also about the reaction in the comments. I understand why people were upset about it; after all, this photo pretty much vanished as it was too much for people to handle. Even after it was first published on that day, later editions removed it after being deluged with outraged readers. Instead, the images shifted to ones of firefighters and heroism.

The Falling Man is a difficult photo to look at for so many reasons. It made you think about what caused this poor man to fall? Did he choose to as a way of deciding how he died? Was he forced out by the toxic fumes or unbearable heat? We will never know. I don’t think trying to identify him was the right thing to do, as was attempted by numerous investigative journalists. Nobody wants to see an image of their loved one dying. He represented the horrific human side to that day.

I have chosen not to publish the photo here as I want you to choose to see it. Just Google The Falling Man, and you will find it.

After spending 17 years working in TV news, the human side is always the most powerful. Watching Baghdad get blitzed on the night of shock and awe in March 2003 didn’t feel real to people watching it on TV; it was too big to comprehend, too distant, too disconnected from their lives.

I was on a US warship filming some of those missile launchings. Once it was all over, rock music played out the loudspeakers amid celebrations from the crew. My reporter and I sat in silence in the ship’s mess. We had only been embedded on this ship for a few days; the crew had been on it for 18 months, having had their deployment extended after 9/11. This moment was a release for them; they were in a different place to us mentally.

I had covered numerous wars, I had seen the immediate aftermath of bombs both from the air and from suicide bombers all close up, and all I could think about was what it must be like in that city after those missiles that left this ship and hit their targets.

After being falsely told that Iraq was involved in 9/11 and had weapons of mass destruction, many cheered that night, thinking that this was somehow deserved and needed. But, once the human side was shown in news reports in the following days, of the human cost, of the families, wiped out, it would be hard for anyone to watch that and feel the same way, I hope.

I know I went off on a tangent somewhat here, but this photo encapsulated this enormous and horrific event on that very day into a single moment, a human image.

In the following days and weeks, we heard personal stories and phone calls from people trapped. The horror of that day became even more upsetting when we listened to the voices of people who knew they were going to die or had their loved ones recount what their last words were. That is what hit home for many. 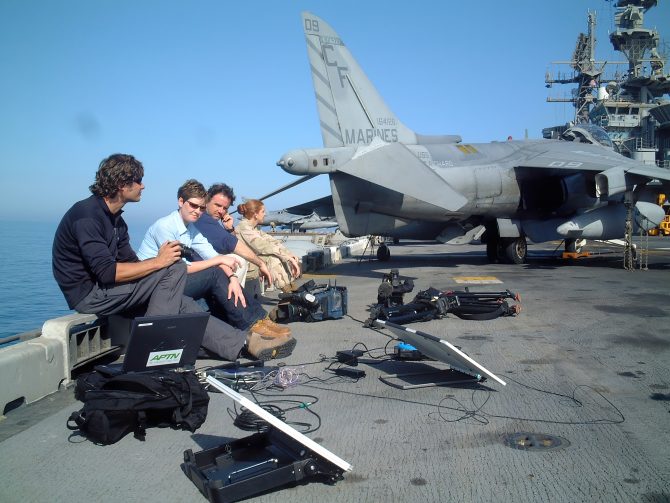 My only issue with this photo is something that is the most significant difference between photos and videos. A photo is a frozen moment in time and doesn’t always tell the whole story. They can be misleading. People say that he looked peaceful at this moment, but seeing the series of photos before and after this frame, it was anything but peaceful. He was wildly flailing and anything but peaceful, and I am sure what was going through his mind was utter terror. I know that video can also be misleading, but that’s a different story.

When I was in the newsroom watching coverage, waiting to be told where I was going to be sent, the bosses decided not to cut to live shots of people falling or use them in any edits recounting the day. They did, of course, report it, but it was deemed too horrific, and I have to say I agreed. On a day of such devastation, there is only so much someone can take and seeing these people fall to their deaths in moving images was unbearable.

It is very wrong that this photo has largely disappeared in the past 20 years. It is an important image and a powerful reminder of the human cost of that day. It does bring us to another discussion, what should we show and what shouldn’t we? Well, it is different for every story.

Sometimes difficult images have to be shown so people KNOW what is happening. We had very little freedom to cover the stories away from the mass media control during Gulf War 2. We were shepherded by the military from A to B with no choice. Photojournalists covering wars like Vietnam risked their own lives away from the protection of the military to show the human reality, the human cost and the horror of what was happening. Footage and photos that they captured helped bring about a shift in attitudes towards that war. 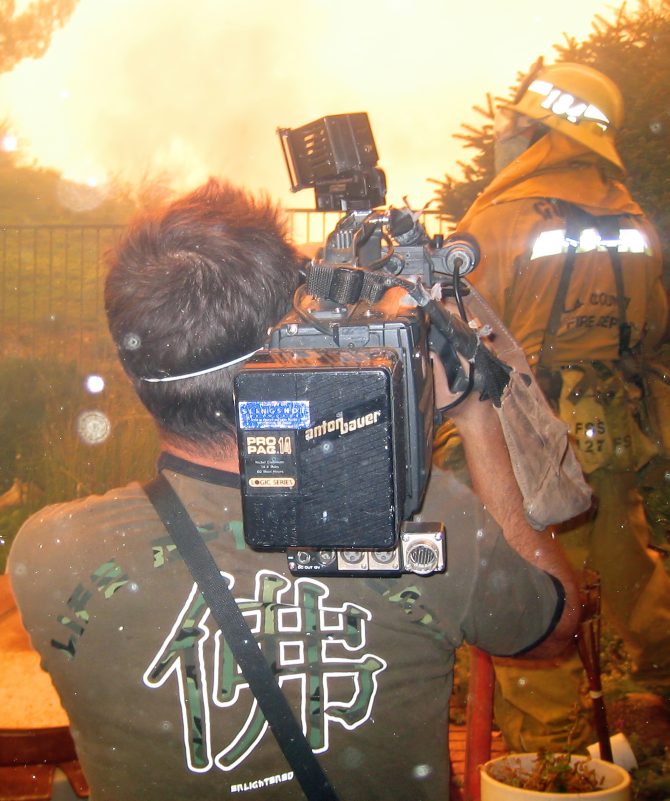 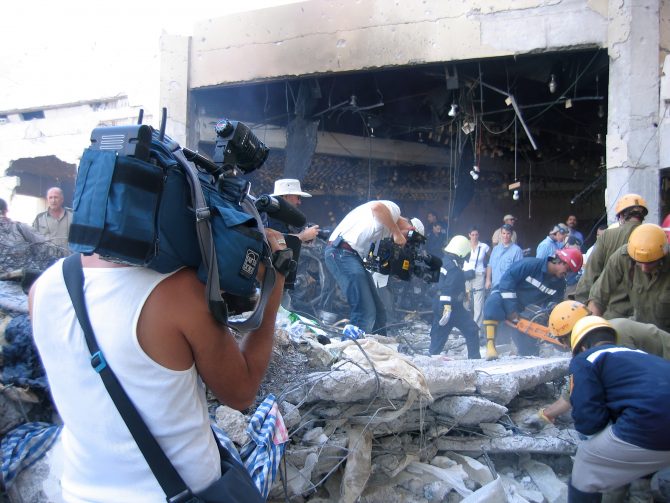 I covered horrific stories because I felt it was important for the world to see the reality, hoping that it could help bring about change. But after 17 years, I left the news in 2006 and went freelance. It had already changed me, and I had to get out whilst I had what was left of my sanity. Three of my friends, who I had spent so long embedded with, committed suicide in the years that followed. They went from war to war, from disaster to disaster.

What made me want to cover the news in the first place were seeing films like “The Killing Fields” as a teenager. I wanted to make a difference, and in the 17 years of covering news, I don’t feel I ever made a real difference. Nineteen years after being based in Jerusalem and spending a lot of time in Gaza, what happened a few months ago was so depressing. It was never-ending. Just how much of a difference can a news journalist make these days? So many get their “news” from Facebook more than any other place and have become more concerned about what happens in their backyard than in the world. 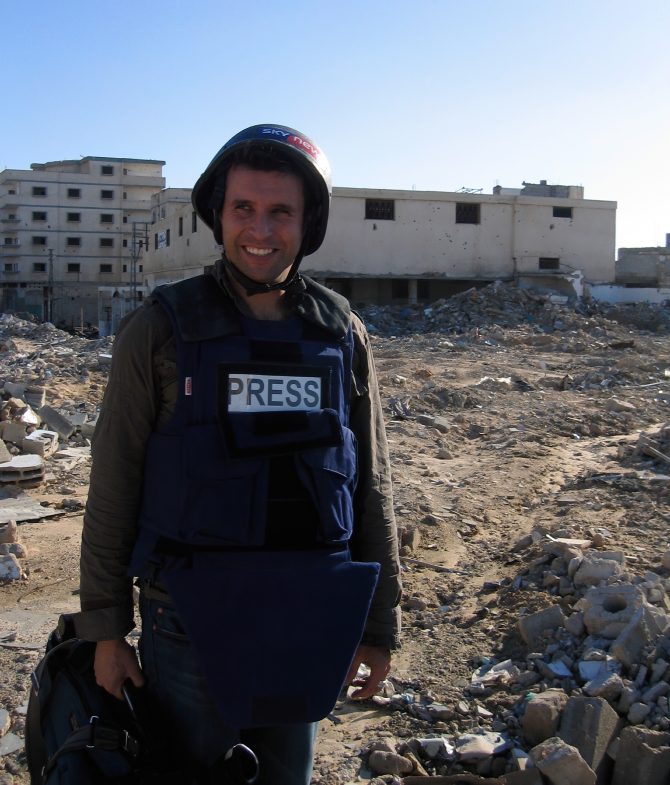 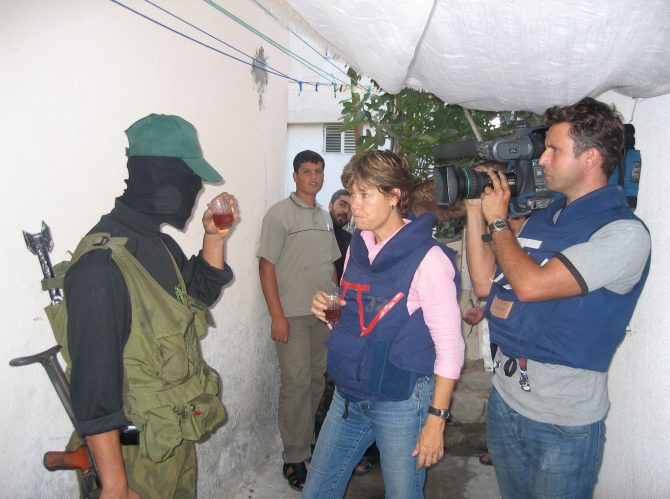 This year I was honoured to be one of the judges for the Royal Television Society’s camera operator of the year; by the way, I hate that term as it makes it sound like you are just operating machinery! The entries were all compelling, and almost every entry had something from Syria in them. A story that most do not care about in this modern world that we live in. Yet, if you watched those reports, how could you not? It’s getting people to watch them that is hard. What news you read or see these days is down to you. You open up the website or app and watch/ read the things that grab you. TV news is like newspapers these days. If the headline is uninteresting to you, you skip it. When we used to watch news programmes, we watched and learned.

When people open Instagram do they want to be faced with an image, albeit something you needed to click to see it, that wasn’t superficial? That made you think?

I’ve never covered news since; instead, I’ve mainly focused on documentaries that would hopefully bring positivity to the world. Although recently I’ve done little of that. But my belief in the importance of news and the impact it should have on us has never gone away. In the UK, we are lucky that TV news is governed by OFCOM and is held to specific standards, which is sadly not the same in print, online, or in many other countries. I wish more people would watch the news and look beyond their own back yards, and of course, use their intelligence to look at multiple sources if they don’t believe something. I have my go-to news sources online, both print and TV and all in the UK.

That’s it for this unusual post from me. I could talk about my time in news so much more, but for now, this will do.

Please remember there is more to life than the latest camera.