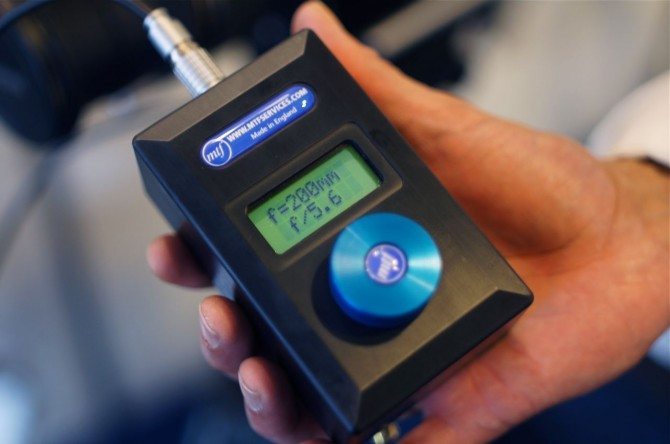 I am sure many of you, like me, have lots of nice Canon glass but no adaptor for F3, FS100, AF100. Just dumb mounts that cannot control the iris. I took a look at the Birger AF100 adaptor a few months back and it was excellent. Unfortunately there is still no sign of it or an FS100 version or an F3 version. What I have found surprising was no other companies were making EF mounts for this camera. Seems bizarre, as the demand is huge! With only one company developing we were getting more and more frustrated with nothing coming out.

At IBC in Amsterdam I finally got to meet Mike Tapa of MTF services. I have spoken to Mike many times over the past 2 or 3 years and have many of his adaptors for many of my cameras. I shot the video of the Sachtler tripod using his E mount to Nikon adaptor on my NEX 5N and have his F3 adaptor for Nikon, AF100 for Nikon and PL, FS100 for Nikon and PL. Great adaptors and really solid.

Mike had mentioned to me a few weeks back that he was thinking of doing an electronic Canon version. I said absolutely. It’s desperately needed! Well the day he flew out to Amsterdam he just finished making his two prototypes and he has them on display on his stand and the Sony stand at IBC. I had a play with it and it’s superb. 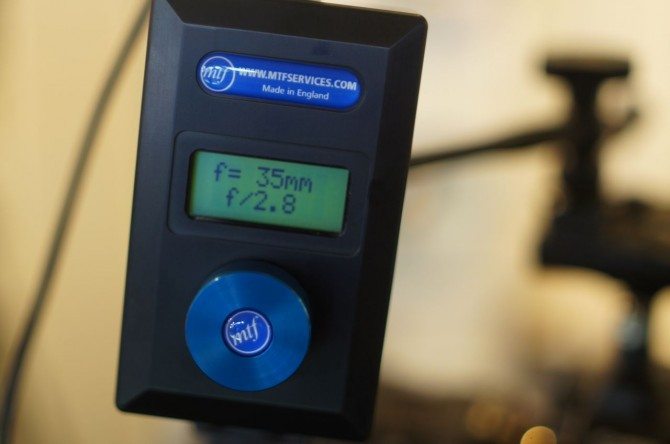 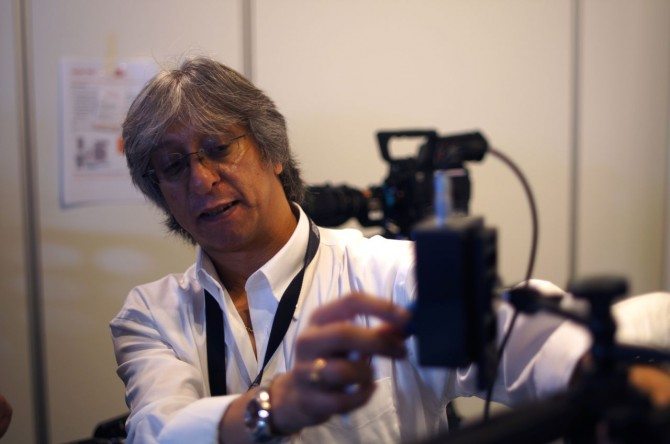 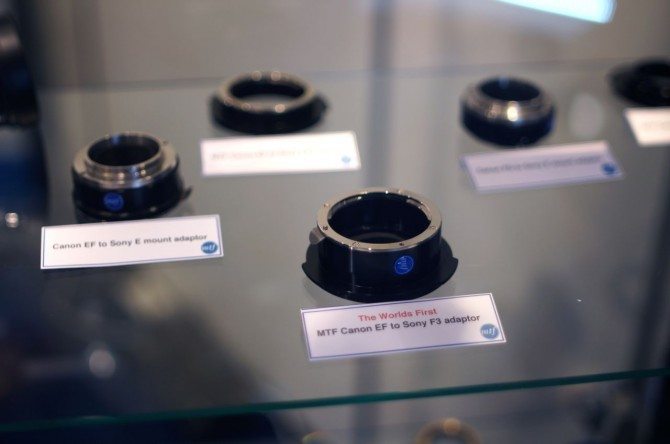 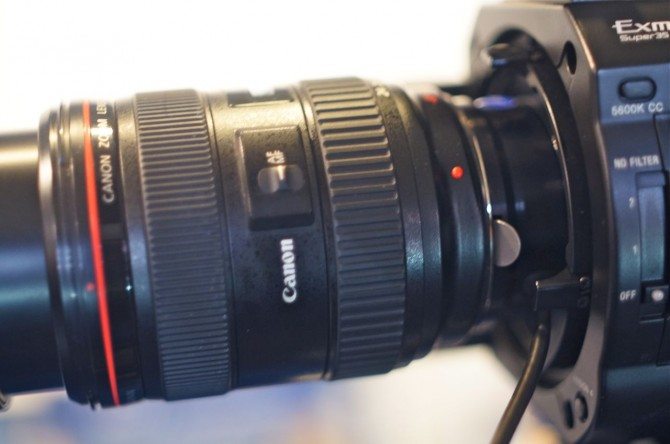 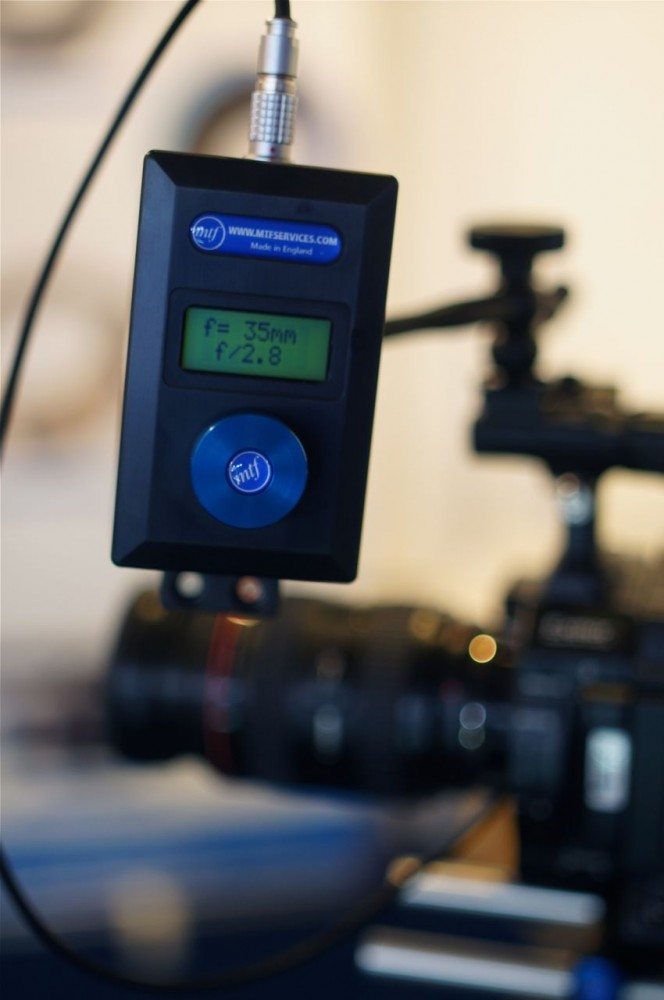 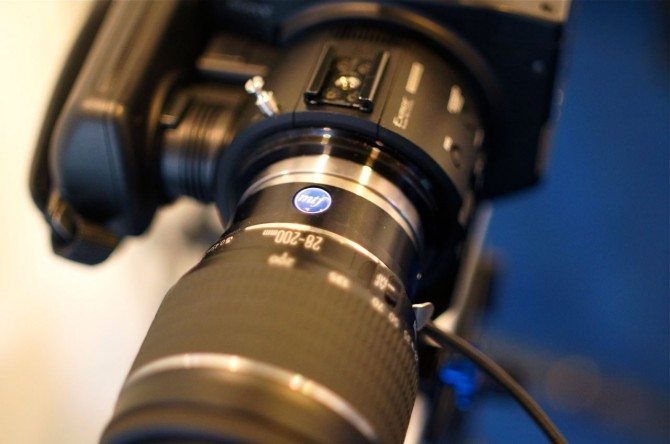 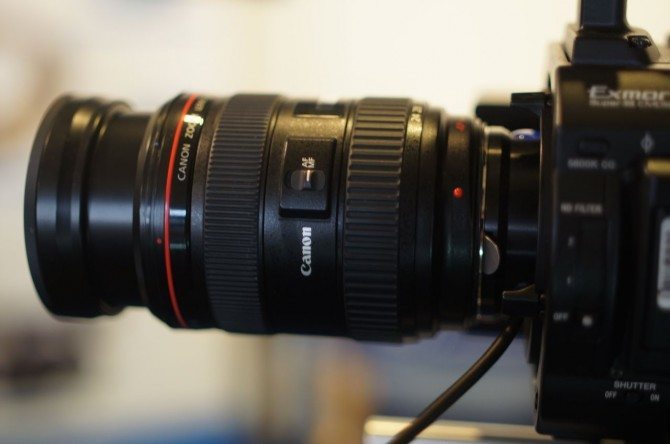 This is still a pre-production model and much can change. But it pretty much works perfectly. It is a Canon EF mount for each camera with a cable coming out of it going to a lemo plug. Ideally it would be a lemo each end, but the way the mount sits into the camera on the F3 makes it impossible to get a lemo socket onto it. It also stops you being able to put any electronics on the outside to control it from that.

The lemo plug goes into the control box. It’s a little on the large side but not huge. You could mount it somewhere less obtrusive than it is in these pictures, it may be smaller on the production version, hopefully. It controls the iris in 1/8th of a stop increments. It’s smaller than the Birger version so better for micro control but still not smooth, so changing exposure during a shot will mean a step change of exposure. You also get the focal length displayed, so when you change your zoom it is displayed. Nice feature. If you don’t have a constant aperture zoom lens (why not?!) then as you zoom in the iris will of course change and this will be reflected in the display. The controller box works with any of the mounts. So if you have one for F3, FS and AF you can use the box on any of them. Of course the adaptor is different.

This is not the final product and there may be quite a few changes, but I have known Mike for some time and he said he should have it out within 3 months, being conservative, that feels like a pretty solid estimation to me. Price wise, he doesn’t know yet, he will make it as cheap as he can…it will be for the box and one mount. It will be great to FINALLY be able to use our lovely Canon glass on other cameras.

He expects it to support IS, he just has not had a chance to test it yet. He also hopes to make the box smaller. As a lot of it is taken up by 4 AA batteries and it looks like 2 will be more than enough for a days shoot+

Hopefully this added competition with give Birger engineering a kick up the backside to get theirs out!!  We have all been waiting far too long for something that cannot be that hard to make?