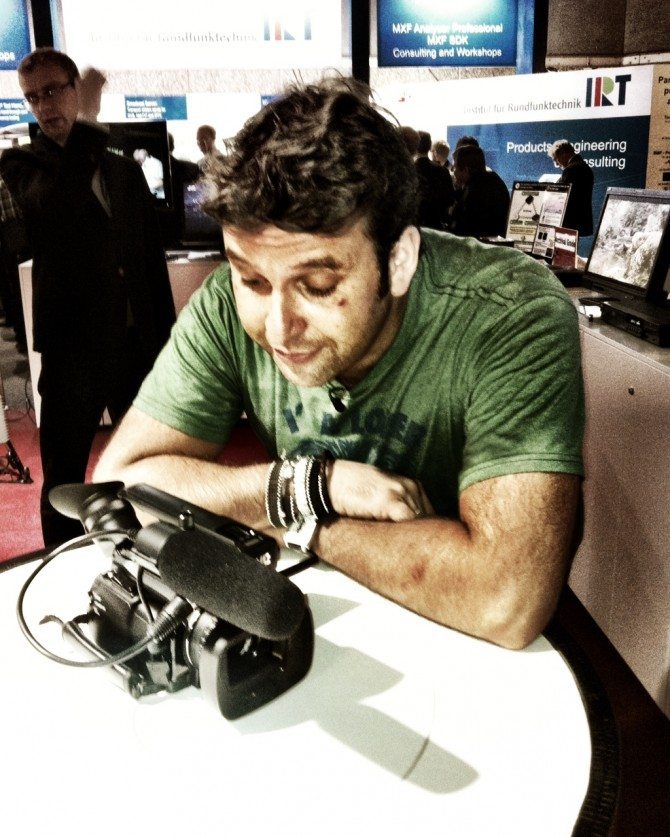 This is my last written blog report from this year’s IBC. There will be a video report that I presented for CVP TV later in the week, but I just wanted to share with you some cool stuff that I saw.

Top of the list today had to be the little JVC HM10K (I think that was what it was called!), a 4k camcorder in the body of the JVC HM100 which I did a review quite some time ago here!

I stupidly left the flyer for it at IBC but what I remember spec-wise is this:

Records at 144 mb/s AVCHD. To do this it has FOUR SDXC slots onboard (!) to record the 4k image split into 4 quadrants. There are also 4 HDMI sockets to externally record 4 streams. Bundled software with it joins the 4 quadrants on ingest before going into your NLE.

It has what I believe to be a 10x zoom lens

It is a “technology preview” but unofficially they “could” be looking at releasing in February and it “could” be priced around the £4.5k mark. Remarkable if it happens.

I saw footage playing from the camera and it was pretty sweet.

This is a TINY camera and a very cheap price for a 4k sensor camera. I guess we will see in the next few months if it comes to fruition.

My initial thoughts are 1/2″? 4 SDXC cards? Post workflow? But we will have to wait and see. I could imagine they might bring out an eSATA/ Firewire 800/ USB3/ Thunderbolt style 4 SD card reader so you can determine which clips to ingest and which not to, as otherwise would you not just see a corner of a clip? Not enough to decide if it’s a good take or not. There are no proxies that I am aware of.

Of course if/ when the RED Scarlet comes out then that will be a much better high resolution solution. A larger chip (although still too small for me) 2/3″ and 8 x fixed zoom recording on one media in RAW. Definitely better…it’s just when?

Remember JVC are tech innovators. For better of worse they invented VHS and HDV… 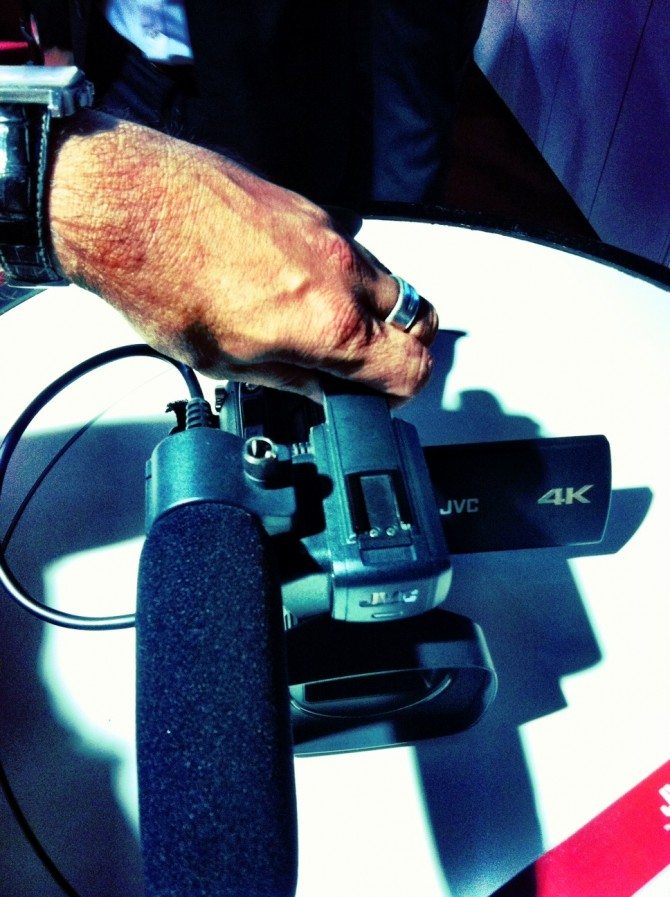 Right on the other end of the price spectrum but the same resolution (albeit of an 8K chip) is the much anticipated by the movie industry F65.

It effectively replaces the F35 – well it at least supersedes it. Still a Super 35mm sensor but with WAY more bells and whistles for a fraction of what the F35 cost when it came out. In what must be a reaction to the price of the RED Epic and the ARRI Alexa, Sony have aggressively priced this. €85k you get this!

The Mechanical Rotary shutter camera is more expensive. The camera is CMOS unlike the CCD of the F35 so to remove any trace of rolling shutter artefacts, they have made a special mechanical rotary shutter model. ZERO artefacts!
If you want just the plain F35 and no bits with it, I have heard you can get it for under €40k! Please buy through my Amazon.com store as I get 4% 🙂 Kidding!
The camera records to solid state SR cards and the current max size is 1TB. It can record up to 120FPS too and of course it’s 444.
Sony really are taking on RED with this camera and it’s a pretty stunning camera. A lot bigger than the EPIC though. Be interesting to see what ARRI come up with next in the high end 4K wars! 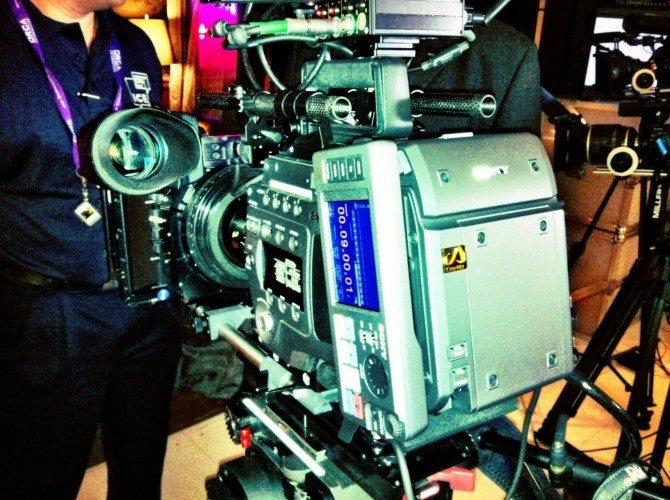 I got to see a working Atomos Samurai too. I am using and loving the AJA KiPro mini which I have on loan and have to give back soon. This could well be a great replacement as it’s cheaper, though I do love my KiPro mini! 800×480 LCD screen on top of a ProRes and soon Avid DNx recorder. Records up to ProRes HQ with HD-SDI. It’s around £1000 which for what it does is pretty good. It also does pull down removal for recording progressive signals. It records onto hard drives. I recommend SSD ones!
If you need an HDMI recorder then this is not for you – you need the not quite so good Ninja as the Samurai does not have HDMI, BUT they have this neat little gizmo not much bigger than a Sony NPF battery which is an HDMI to SDI convertor and vice versa. It has a built in battery which lasts two hours and a hot plate for a Sony NPF battery which will last well over a day’s shooting and, even cooler, the other side is designed to fit onto a Sony NPF plate, so stick it on your Marshall monitor and you have HDMI in, HD-SDI out convertor on the monitor. Sweet! It should be out in a couple of months and will be just £220! 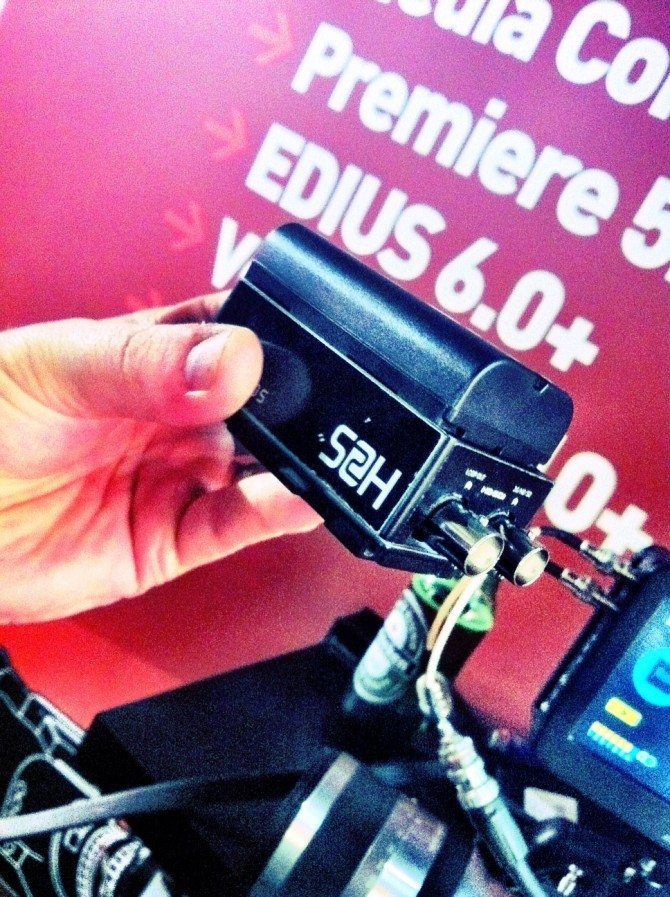 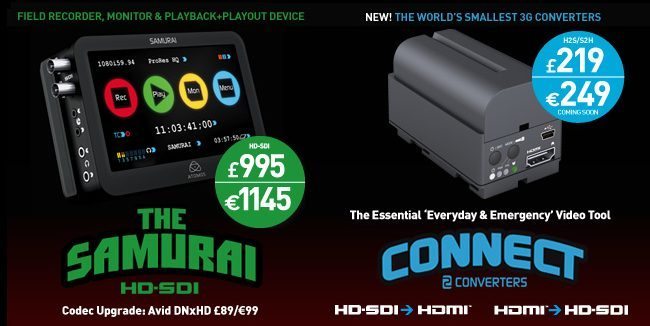