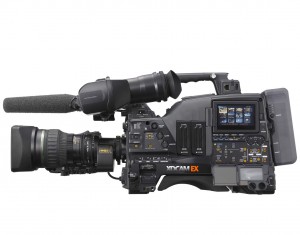 The PMW-EX7 camcorder is equipped with three 1/2-inch CCDs – using newly developed “Power HAD™ FX” progressive CCD technology with 1920 x 1080 effective pixels. Breathtaking HD images can be captured by these high-resolution CCDs and the 14-bit A/D conversion and advanced digital signal processing incorporated into the PMW-EX-7.

The PMW-EX7 comes with 4 SxS slots (Please note. This camera will not take MxR or MxM cards) and records from 50Mb/s 4:2:2 through to DVCAM.

The superb picture quality of the PMW-EX7 will increase the appeal for applications such as documentary, European TV drama and mainstream entertainment programmes that require a high quality look. File-based acquisition, with thumbnail and proxy operation is also ideal for fast-turnaround news and live applications where speed of production is a critical requirement.

The suggested price will be around £8700

Personally am waiting for the EX9 in 2011 which has 14 SxS slots for ultra continuous recording. Also has a P2 “sleeve” if you want to use your old P2 cards in the SxS slots.

Also has built in optical stabilizer made for Sony by Tiffen that replicates identically the Steadicam look off your shoulder.

Personally this is all a bit pointless for me as I have decided to sever my ties with Sony, sell all five cameras I have of theirs, as I think the picture quality of them is a bit rubbish. I have now been bought up, I mean, signed an exclusive deal with Nokia to shoot everything from now on using the N96. I hope you all do the same. Works great with the Letus Ultimate and a 7mm adaptor ring. Zacuto are already hard at work on a rig for this, should be out in time for NAB.