Here is a proof that a 26″ long slider works just great for motorized timelapses! This is my first one using the Pocket Dolly Traveller,Elektra Drive and Oracle controller system.

Pocket Dolly timelapse from Kessler test on set of Red Tails from Some Like It Shot on Vimeo.

EDIT: You can read my original blog below but here is the updated info:

I am due to be making a how to video for Eric Kessler on how to use the motorized systems but my ill health has kind of put that on hold for now. In the meantime I wanted to just let you know what they have and what they all do… 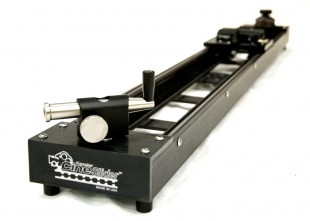 First off we have the sliders themselves starting with the king of the sliders…the Cineslider. It’s big, comes is different lengths, can take your puny cameras as well as you big ones. It’s smooth as a baby’s bottom and quiet. As a slider on it’s own it’s just superb but it’s with the Elektra drive system that this baby comes into it’s own. The cineslider has a belt and gear system that runs on stainlesss steel wheels. At one end of the slider is the crank to move the slider along without touching the camera, the other end is where you can attach one of the motors. There are two motors you could use with the slider. The 200 is the general use one and the 500 is the slower one for slower timelapse. Both can be used for timelapse but the 500 operates at a slower speed so you can do longer moves, it is also noisier due to this. The 200 is a much quieter motor. 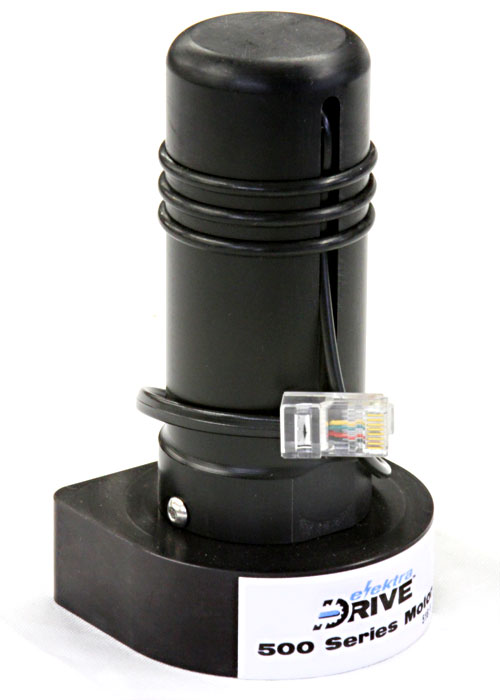 OK, so we have the motor so what else do we need? Well you need to be able to control it and that is where the Oracle control system comes in. The Oracle controls the motor for both normal movement and timelapse movement. It’s a clever beast and the analogue joystick is very nice to use. 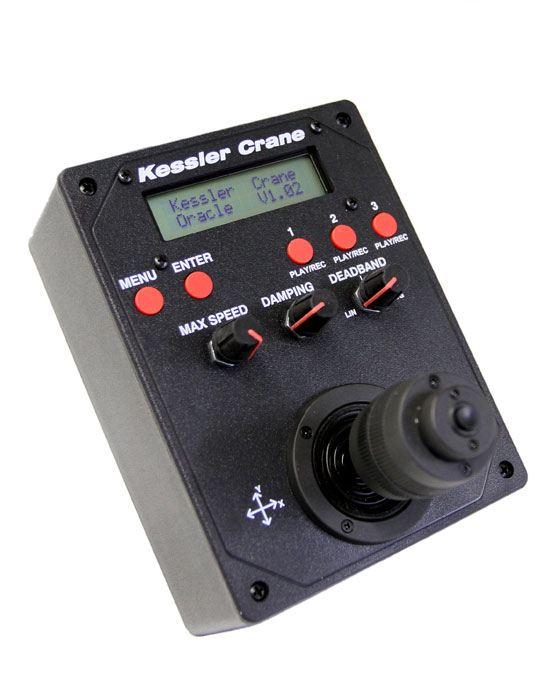 They have also brought out a motorised pan and tilt head called the Revolution. This works for remote jib operation as well as for timelapse and is again controlled by the Oracle. 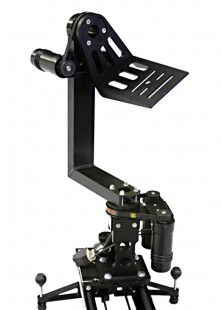 You can also put the motor on the Pocketdolly with the belt and crank, even the smaller one that I have, the traveller and it works a treat. 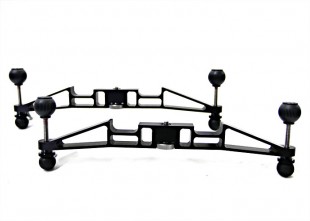 Also new are the feet for both the Cineslider and Pocket Dolly for operation on something other than a tripod. Very useful.

I have been using these sliders with motors now for 2 months and I can say they are absolute brilliant. Kessler Crane are also another one of those companies with incredible customer service.

You can read about the pocketdolly before and see my first attempts at using the motorized system. Much more to come as I will be shooting down in Key West next month with this gear. Should get some great stuff.

The following film I shot in the grounds of Skywalker Ranch and it contains lots of Cineslider motorized dolly timelapses and lots of pocket dolly traveller shots. Shot on the Canon 5DmkII in native 24p!!

ORIGINAL BLOG BELOW: For the past few weeks I have been lucky enough to have been testing out the prototype motor system for their excellent new Cineslider. I have pretty much been using it for just motorized timelapses. I have also tried it out purely in simple manual crank mode for smooth dolly shots and its utterly superb and quiet.

It is big and weighs in at 10 pounds (which is good as it doesn’t bend at either end with the weight of a camerea) but it mounts just great on a decent set on legs like my miller solo legs or something heavier with the bowl mount attachment. It can also take all cameras, from your little Rebel T2i to a camera rig weighing 80 pounds so this slider will work for all your rigs!What I have been using is the Cineslider with the new elektra drive motor and the Oracle controller combined with a battery pack. The motor I have is designed for ultra slow timelapse movements and is therefore a wee bit noisy for non timelapse moves. But there is a quieter motor coming out. Don’t forget this is all in prototype stage.

Why do I want to do motorized timelapses? Simple…a dolly move in a timelapse adds a wonderful third dimension to the shot, especially if there is something key in the foreground that can give you the parallax effect.

With the Cineslider, motor and controller set up every night I tested it out every night, working out the timings of the Oracle to get the right duration for the travel from the start to the end of the slider. Due to the software being in prototype stage and not the final software, which will essentially let you say go from the start to the end by a set period of time. My controller currently is more complicated than that where I have to tell it how much I want it to move each step, how frequently each step should be, how many times i want it to do this and at what percentage I want the motor to work at. My experiments and tests mean you won’t have to go through what I did, which is program it for what you think is a 3 hour move and find it has moved 2 inches in 3 hours or you program it for a 6 hour move and it finishes in an hour. It’s been trial and error but between myself and Eric Kessler we have worked out the formula that will make everything nice and easy for you. 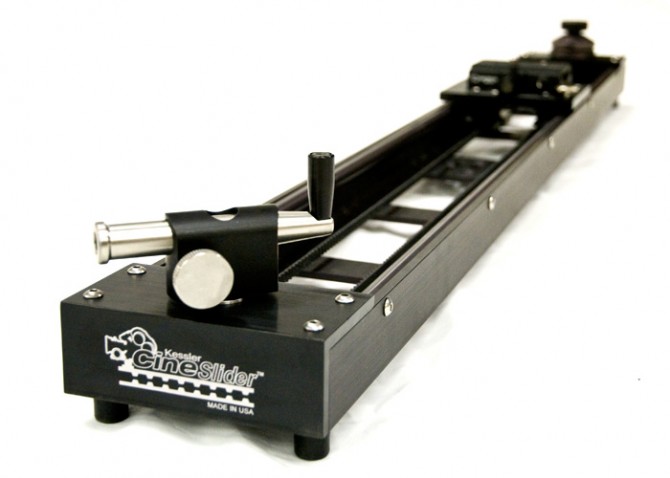 The thing with timelapses are is they are quite tricky to get right and you can waste hours before you find out the shot is no good, unlike a normal video shot. 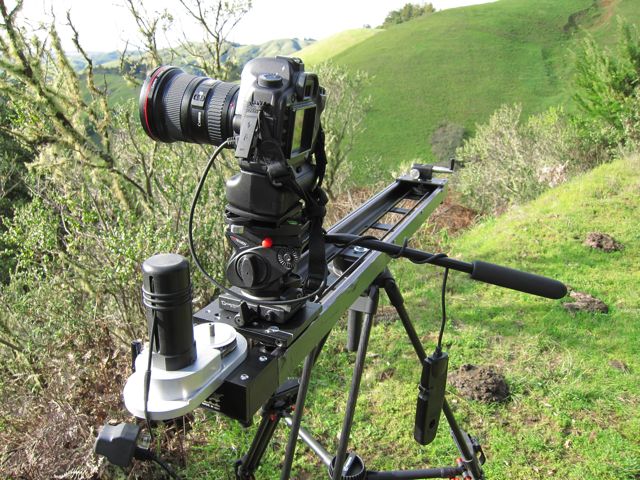 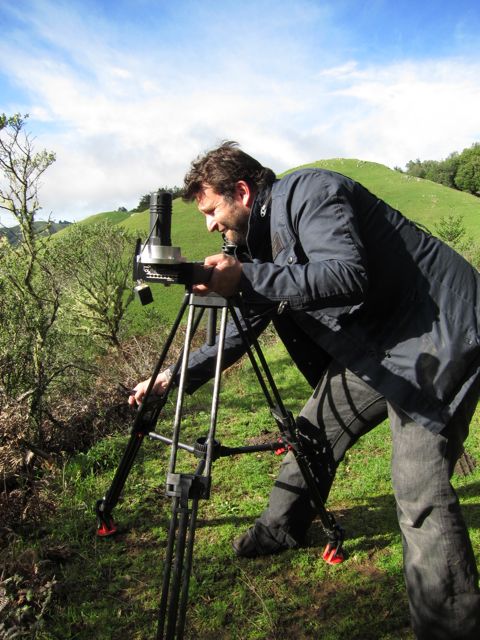 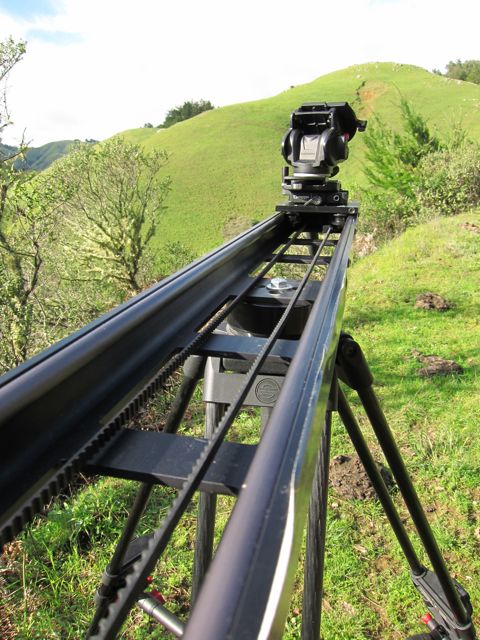 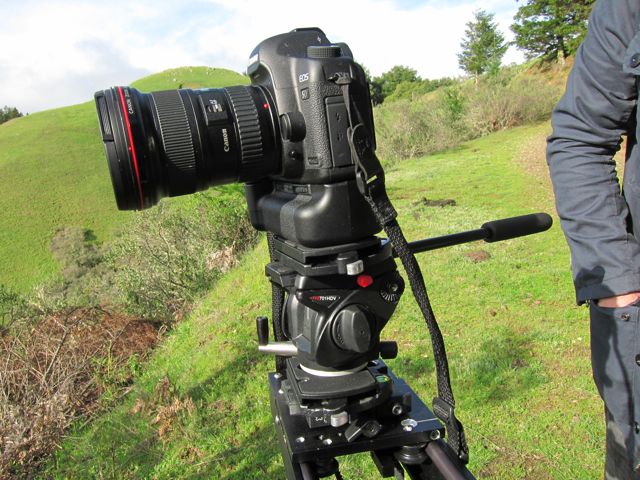 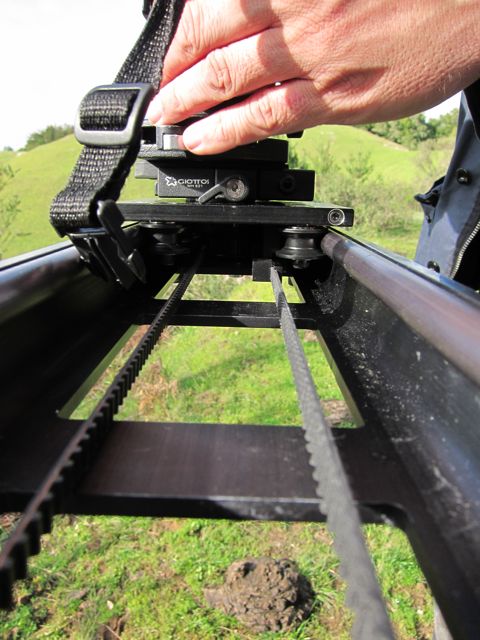 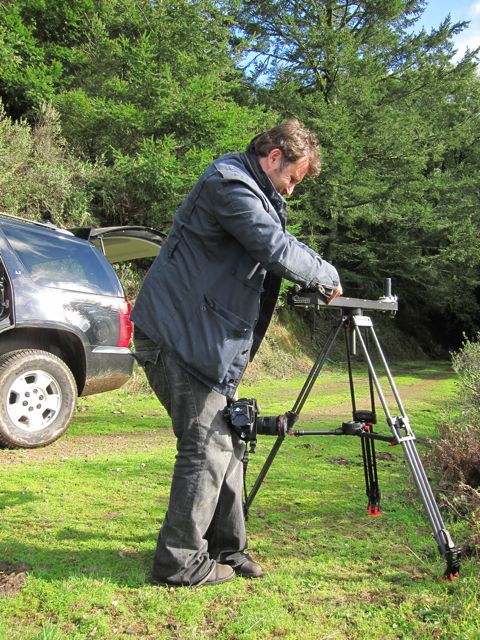 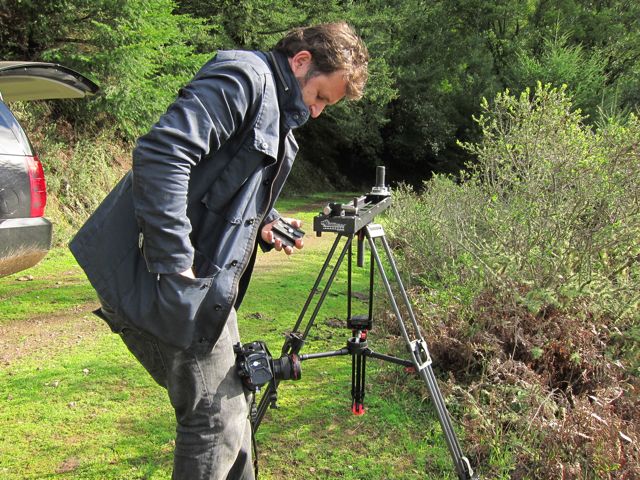 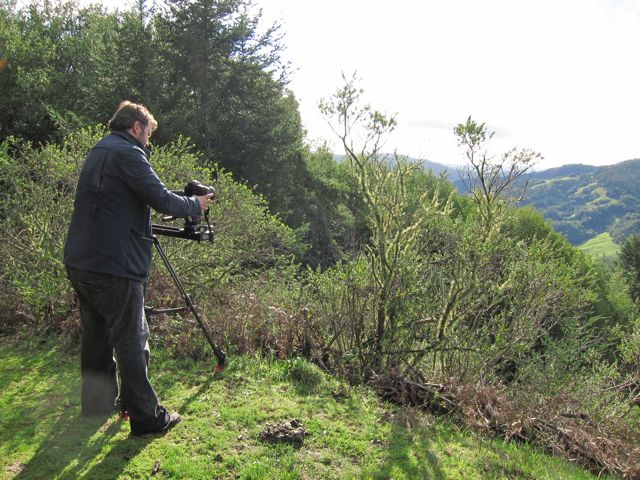 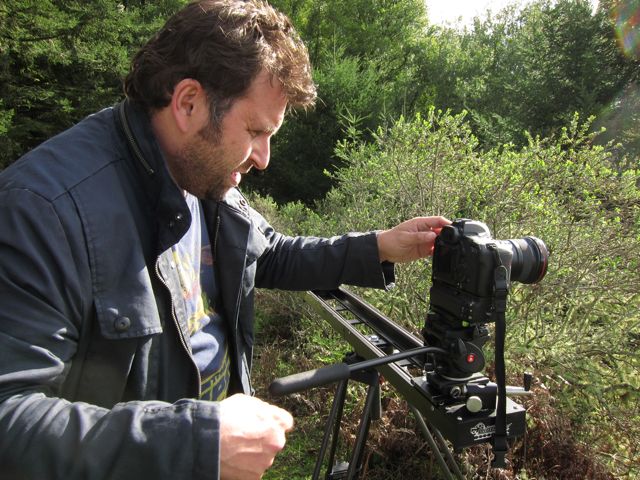 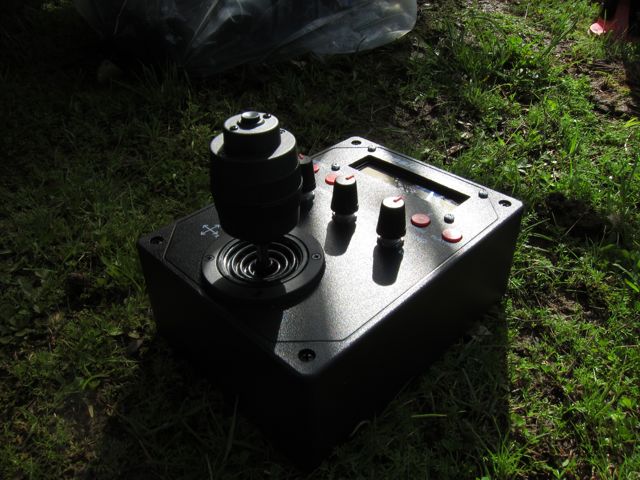 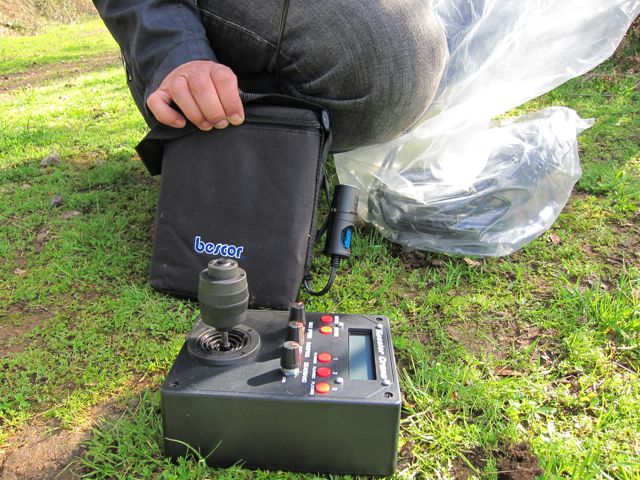 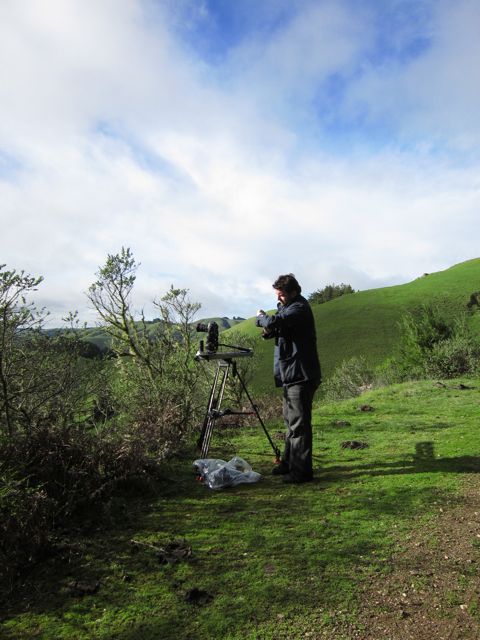 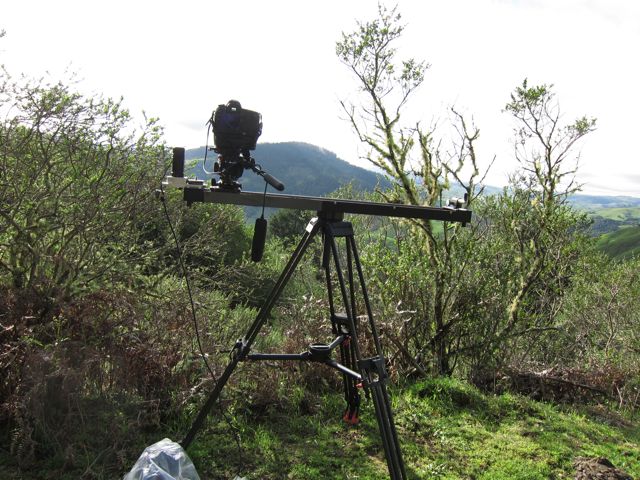 Below is one of the video diary I made with my intern Garret O’Brien at Skywalker Ranch where we tried to do a lovely sunset timelapse. I was off by about 3 hours. Bad maths by me! But eventually I worked it out to the point where I know exactly how long it will take to go from A to B! Phew! There are some of my successful timelpases at the end of the video diary.

Kessler Cineslider Review Pt1: Motorized timelapse from Some Like It Shot on Vimeo.

Even though it moves in small steps the steps are so small that it doesn’t register when taking a still so don’t worry about any blur. I had none at all.

Obviously timelapse is not the only thing it is great for. You do normal speed dolly moves which you can do live or even program into 3 memories meaning they can be repeatable. Very very useful. Check out the video below for a demo of this.

Kessler Cineslider Review part2 from Some Like It Shot on Vimeo.

As I said in the video, the motor will be a LOT quieter when you want to do this on the production model. This is all in prototype stage but works brilliantly. It also helps that Kessler Cranes are a very hands on company and want to make the best product possible, that is why I have been working with them for the past month to make it absolutely perfect before it goes on sale…which is pretty soon hopefully. The Cineslider is already available to buy and the motor/ controller are simple adds on. The Pocket Dolly with crank also will take the motor which is great news. I used the Pocket Dolly Basic and I liked it but found it too long for my tripod as it flexed on either end with the weight of the camera on it. This won’t happen with the Cineslider and it’s also why I asked Kessler to make a smaller version, they did and it’s called the “traveller” and is 25″ inches long. They make the basic without the crank and one with the crank. I recommend the Pocket Dolly with the crank as it’s definitely smoother than the non crank one and is quiet. I don’t actually use the crank on the Pocket Dolly, I do on the cineslider but due to the length of the traveller I find I go better results using it by hand, but the addition of the crank and belt system makes is smoother than the non crank one and I was able to get first takes almost every time. Really impressed with it.

The following film I shot in the grounds of Skywalker Ranch and it contains lots of Cineslider motorized dolly timelapses and lots of pocket dolly traveller shots. Shot on the Canon 5DmkII in native 24p!!

The great thing about the Oracle system is it is also designed to control 2 other axis for a pan and tilt head that is coming out soon. All will be programmable via the Oracle controller or just simply controlled by the Oracle controller. This gear truly is excellent and is going to take my timelapse filmaking to the next level, and the traveller is great. Small, lightweight and performs excellently.

I am so impressed with the quality of their sliders that I have joined their affiliate program as I have such confidence in their products. I am only affiliates of products I love, like Magic Bullet, Zacuto, GoPro and Pluraleyes.