Filming interviews with DSLRs & recording sound separately and how to sync the bloody lot up! Also the advantages of IS lenses for them.

How catchy is that for a blog title topic?! Well this blog will say what it says on the tin..

I have shot probably thousands of interviews in my career. 99.99% of them with sound recording onto the tape/ card etc of the camcorder. Nice and simple…it works…

But recently though I have, as you know, been using those HD-DSLRs (or Video DSLRs as I used to call them until everyone started calling them HD-DSLRs!). I haven’t done a huge amount of interviews with them though, certainly not one man band. Most of the time I have a separate soundo but on this job in Dubai I have been doing the sound myself, although I have an assistant.

This documentary has A LOT of interviews in it. All shot with same look and background and all shot on the Canon7D as we need 25p as the 5dmkII firmware has not come out yet. We all know the sound limitations of recording audio on the 7D and I really do recommend recording separate sound. I used the Zoom H4N with a Sony ECM 77 plugged into it. I also used a Rode Video Mic on the camera to give me reference audio for syncing. More of this later.

The interviews have generally been pretty long and we know the clip limit on these cameras is around 12 minutes, so what you need to do is stop and start the recording before the 12 minutes runs out. Now the traditional way would be to do a clapper board at the start of each new clip. Interrupt the interview to stop then do another clapperboard. This is not good for the flow of an interview. I want to keep it seamless and this is how I do it.

First off I do not use a clapperboard…or a clap or any sync point. The reason being is I use a genius piece of software called Pluraleyes from Singluar Software for Final Cut Pro and Sony Vegas. It compares the audio waveform of the sound recorded on the DSLR to the sound recorded on the zoom. Put them on different audio tracks on the same sequence then you simply click sync and as long as the reference audio on the camera is good enough it works! 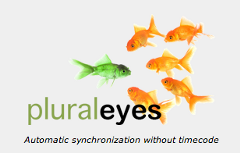 This is great for a number of reasons. First off, it saves a lot of time. Secondly no sync clap is needed so I can keep the flow of the interview going. With this interview series the director’s voice will not be heard so what I do, when it gets to around 8 or 9 minutes I simply button off and on very quickly whilst he asks a question so there is no interruption. Neither he or the interviewee knows I have started a new clip and with the auto syncing software I don’t have to worry about a sync point. I also just leave the sound recording on the zoom. I don’t button on and off for that as there is no need. Pluraleyes will move the video into the correction position on the timeline over the audio. There will be very small gaps of black where there is no video that matches the audio from where you pressed stop and then start again on the camera.

If I needed to have the sound of the interviewer for use then I would use the old trusted technique of tapping them on the shoulder at around the 8-9 minute mark so the next time they ask a question they simply pause and say to interviewee, hang on one sec. I then say OK. Simple as that.

I tend to shoot these interviews on a zoom lens, this gives me the freedom the change the size of the shot without stopping and starting as I would have to do with a prime lens. The F2.8 70-200 mm Canon IS is my lens of choice for this.  You really wouldn’t want to shoot an interview below F2.8 anyway unless the interviewee is like a statue otherwise you will struggle to keep focus. Even F2.8 is tough. Around F4 is nice and safe. But if the interviewee is pretty still I tend to push for F2.8 as it looks so nice.

The problem you get with this is camera wobble. Especially if you lock of the pan and tilt on your tripod then the interviewee moves and you need to reframe you introduce judder into the shot as you unlock them. For this reason I love the image stabilized lens (IS) of the 70-200mm. It removes this judder beautifully. I also REALLY recommend a follow focus as this also takes out a lot of the vibration rather than changing focus using the barrel of your lens. Take a look at the short video below to show you what I mean…

Using IS lenses in Interviews with the Canon HD-DSLRs from Some Like It Shot on Vimeo. 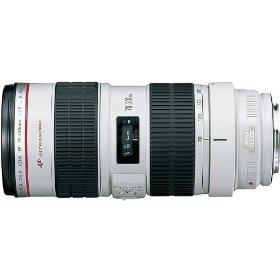 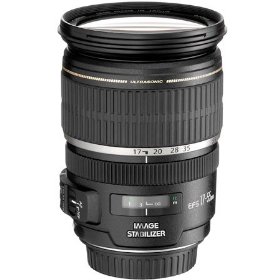 Very nice IS lens for the 7D

I promise you, unless you have a REALLY noisy IS lens you won’t hear that rumble on the recording. The IS makes a huge difference. If you are using shorter lenses it’s much less of an issues, but I hope Canon bring out some more IS lenses…

Here is my set up for the interviews on this gig…although this is far from ideal. Best set up would be a heavier duty tripod so I could get counterbalance right so I wouldn’t have to lock the tripod pan and tilt lock all the time and also mounting monitor on top of camera does create some odd balance issues so stick it on a magic arm attached to tripod leg ideally.I forgot my magic arm and my noga arm so that’s why it’s on the hot shoe. With such a set up it’s really been essential to have the IS lens. 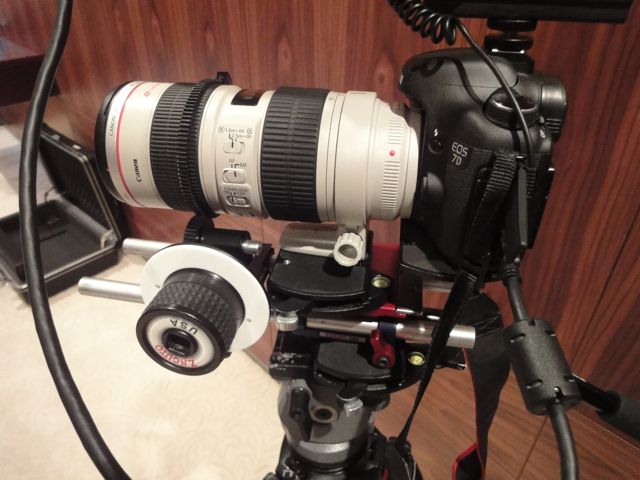 Camera is attached to tripod via the lens for better stability but two tripod plates causes extra wobble. 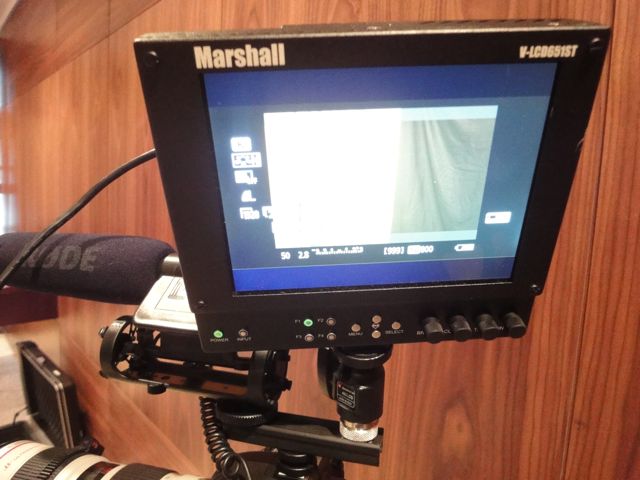 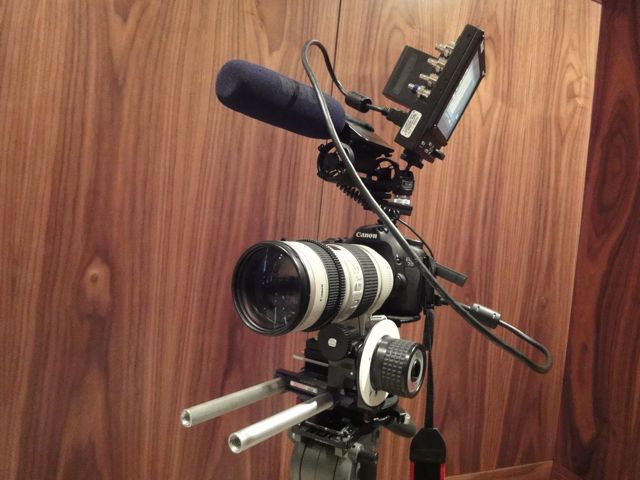 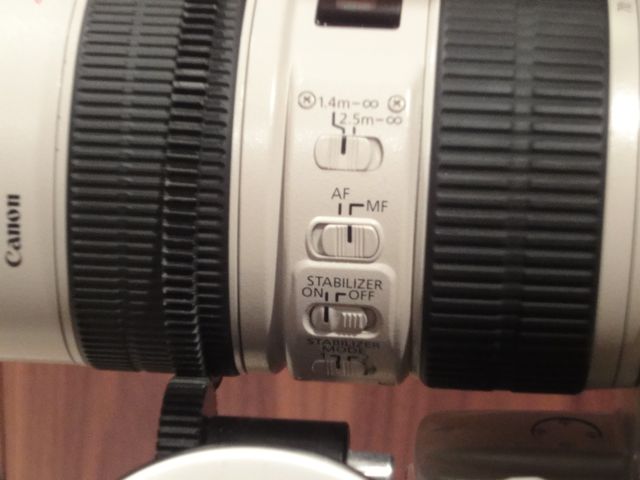 Next we come to the post side. As I said I used Pluraleyes and Final Cut Pro.

I did what I always do as shown in this tutorial and it synced just find. Problem is sound drifted after about 10 seconds and I couldn’t for the life of me work out why. Both 7D sound and sound on Zoom (24 bit WAV) were at 48kHZ so there was no reason for any drift to happen. The sequence settings were correct, they matched the video perfectly so WHY was it drifting? This freaked me out for 2 days…I have never had this happen to me before. Solution came from Robin Charters, son of Rodney Charters who said as I had been in the US did I perhaps at some point have a 23.98p set up in my FCP…the answer was yes. He said that I needed to make sure my capture preset frame rate was also the same as the sequence settings as Final cut pro has a glitch that insists that the capture preset be set to same frame rate. So my frame rate is 25p therefore my capture preset needs to be 25p too. So I selected ANY 25p setting, DV PAL worked! FCP imports audio into sequence from this setting NOT your sequence settings. This has been plaguing people for months, Bruce Sharpe has always recommended using easy set up but this never explained to me what was causing the problem…now thanks to Robin we know why. Robin will be writing an in depth article about this soon and I will share the link with you as soon as he has done it. One caveat if using a 5d in 30p mode there is an additional problem that Bruce Sharpe of Pluralyeyes explains here. Of course if you are and have aways shot in same frame rate you won’t have this issue. If like me you change your frame frate for different projects you will come unstuck like me. This is the fix.

With this VERY handy bit of information I redid Pluraleyes and low and behold we have perfect sync. Zero drift and all the interviews are synced up (apart from one bit where I forgot to turn the RODE mic on so we had no reference audio, schoolboy error that one!)

I hope this was useful to you as there will be many more supertips and hints like this to come!

Be great if Canon implement IS into all their lenses from now on, or even better…their cameras. It’s pretty essential with the rolling shutter issues and would make shooting with such an awkward little thing like this so much easier!