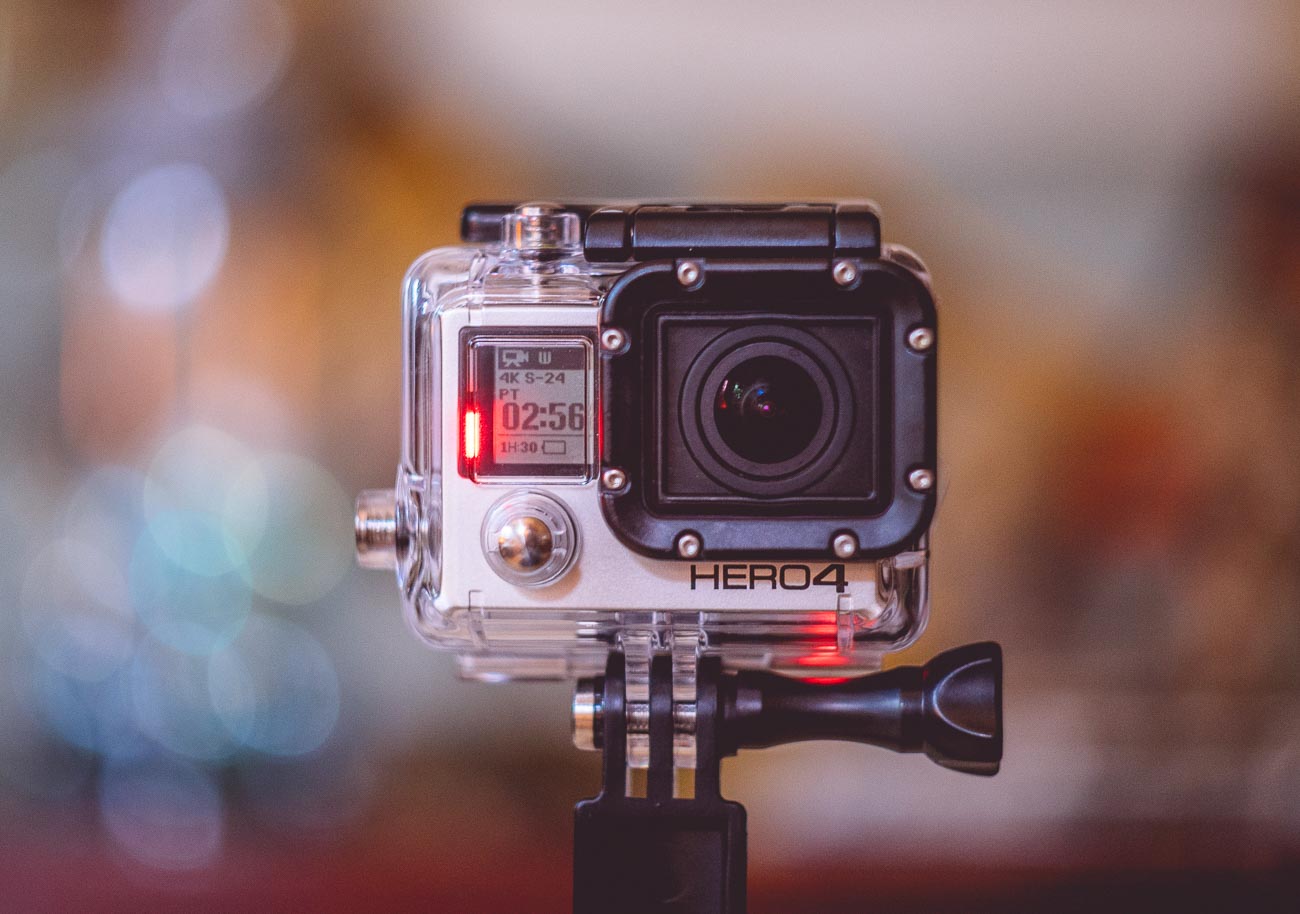 Please keep checking back, as this post is a work in progress. I will be adding my initial thoughts and then continuing. It will be oldest at the top, newest below. Like a diary. There won’t be a formal video review, as there is simply no time to do one. This series I am shooting is giving me around 6-7 days off in total for the rest of the year! So it’s squeeze in a few words when I can.

I will share as much native stuff as possible but also share some stuff that I have cut and graded. Again, keep checking back, as I will constantly be adding stuff.

To start us off, here are two clips. Both showcasing one of the key features: 4K in usable frame rates of 24, 25p and 30p!

The car one can be downloaded as a native clip for any Vimeo pro or plus users.

Initials shots with GoPro 4 in 4K with DJI Phantom 2 with Lightbridge from Philip Bloom Reviews & Tutorials on Vimeo.

I have been using GoPros since the first Hero HD. They have now of course taken over the action camera world, and deservedly so. Naturally they have gotten better with every generation. The last one, the 3+ is terrific.

The thing is GoPros have never been a primary form of camera due to my type of work. After all, I am not a base jumper, skier, surfer etc etc…this is what they have primarily become used for. My use of GoPros had been for attaching to things. People….cars…etc…

A lot changed for me though, when I used my 3+ in conjunction with something else, A DJI Phantom 2, and the result was magical for me, like a whole new dawn of freedom when it came to filmaking. The was also the first complete GoPro piece I have made! I had done some tests prior to this and some fun little time lapses but never anything considered like this.

The GoPro will never become my main camera – it will always be for specialist stuff like flying or underwater, but as a tool I have always loved it, and I am always desperate for a new one as I know the improvements will be much needed! The GoPro is an essential part of my kit, and if it’s gotten a lot better then I will be very happy! 🙂 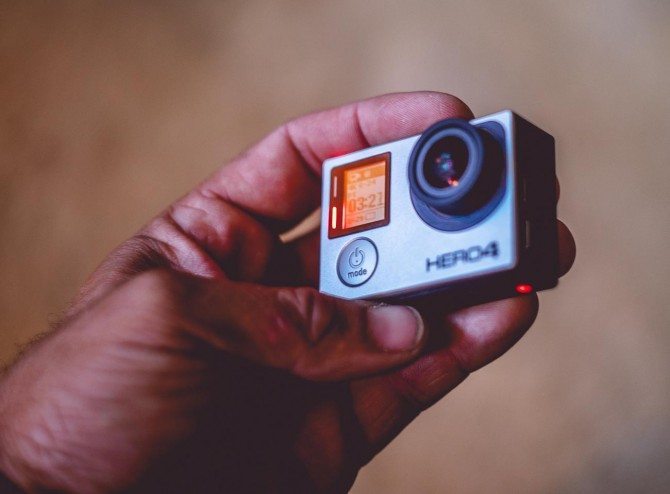 The things that bugged me about the 3+ that I hoped would be rectified.

The lack of a back button for menus, as they are fiddly.

I received the GoPro 4 at the end of last week just after getting home from filming at the Dead Sea for a week. I have been eagerly awaiting this for ages. Just how many of the above things would be improved? What else might we get? 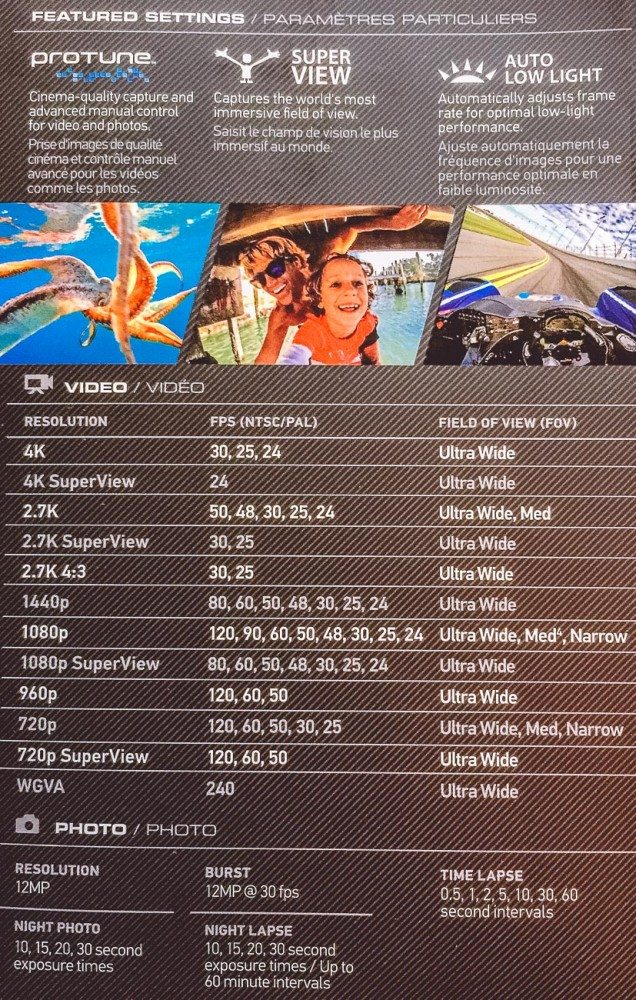 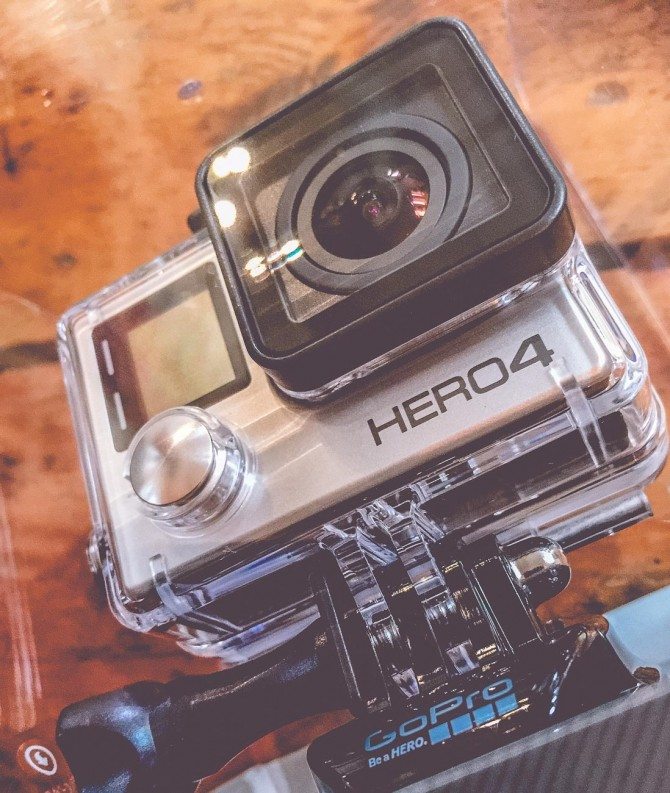 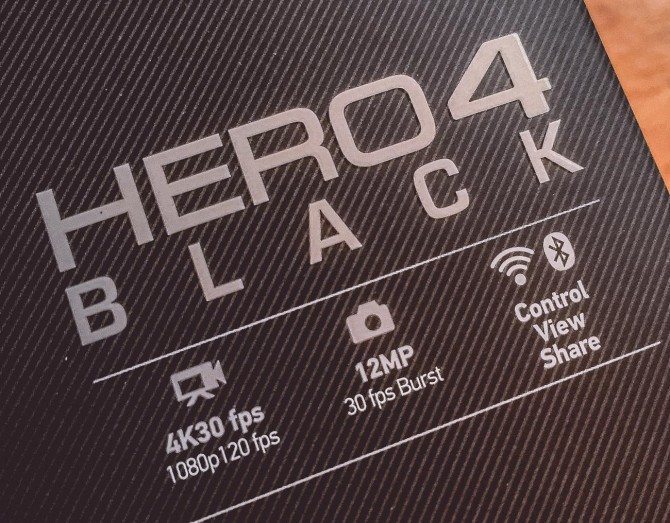 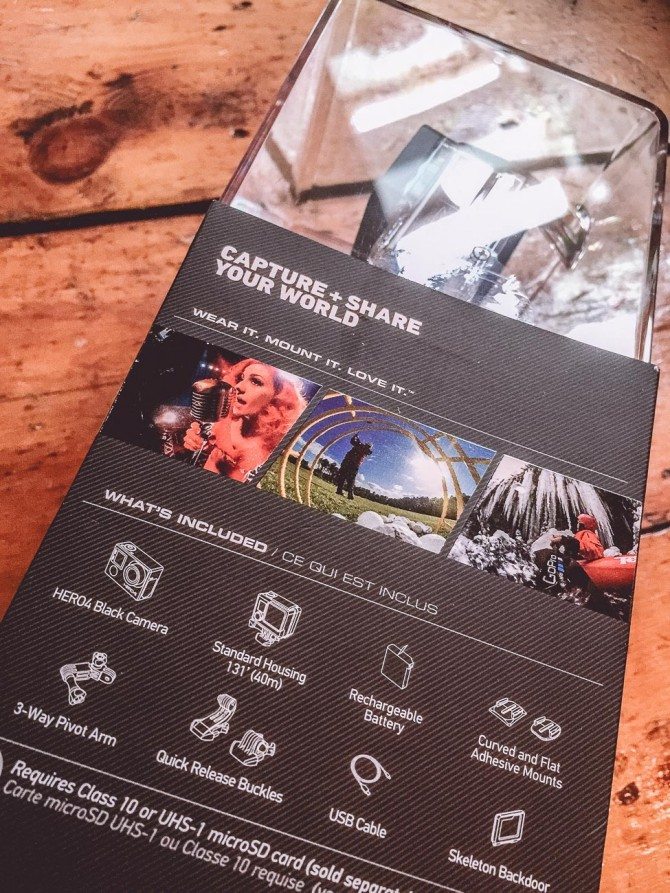 The aim of this evolving review/ post is to go through the differences to see just what has been improved and what hasn’t. I will also take a look at the new features and try them out. It will take me time, as I will be finding this out whilst actually using the camera on this documentary series I am shooting for CNN. So if this post/ review feels unfinished, that’s because it is and will be added to continually. 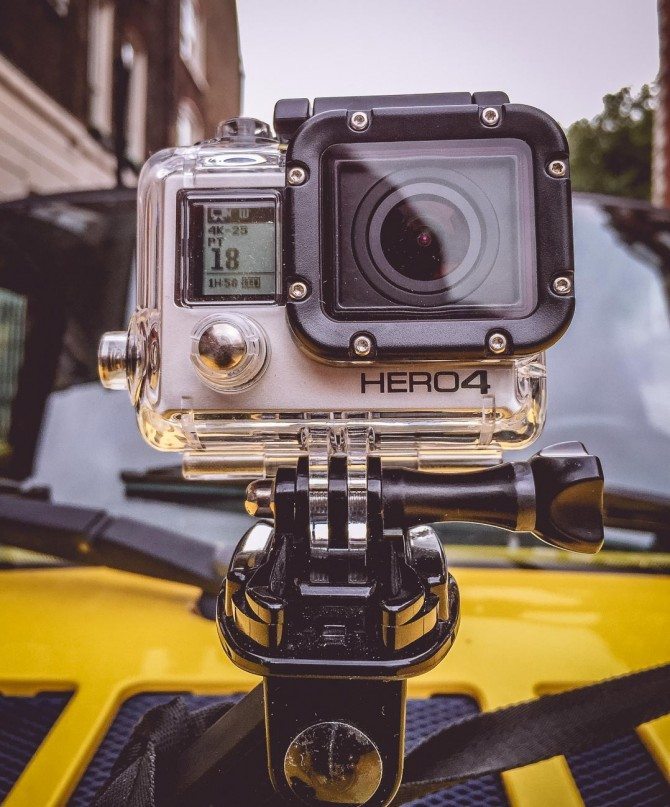 My observations when setting it up where as follows:

Thankfully the camera shape has not changed. There is a new battery compartment with a new shaped battery with larger capacity, at the bottom of the GoPro instead of the back. The GoPro connector is still the same on the back, so the battery Bac Pac and LCD one still work. This should mean it will work with the older Phantom ZenMuse gimbals. The newer ones have changed and don’t use that anymore, which is a shame.

Interestingly/ annoyingly the Black and Silver models confuse things a lot. The Black was always the top of the range, and it is positioned as such, but the silver has all the Black has, minus the 24,25p and 30p 4K AND it has a built in screen at the back! I would love a screen to be built in without needing the LCD Backpac. It wouldn’t surprise me if we see a Black + version with a screen at some point.

The side button is now no longer just wifi but also used to change video/ photo settings. The Tally light and charger are now to the left of the main LCD instead of the two small circles by the power button.

We still have no 2nd menu operation button, which is something I really wanted! Compared to the original GoPro menus which were essentially in code, these are great, but I prefer an up and down rather than just a cycle through button…maybe Hero 5? 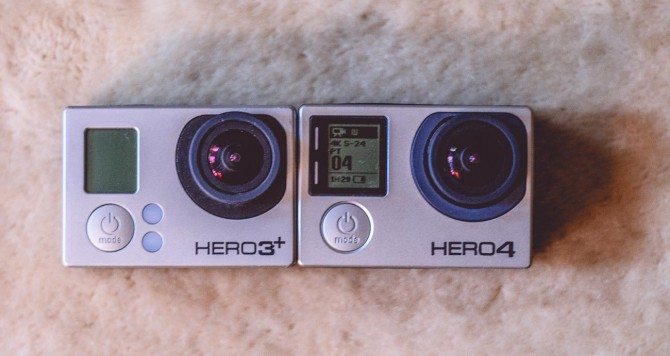 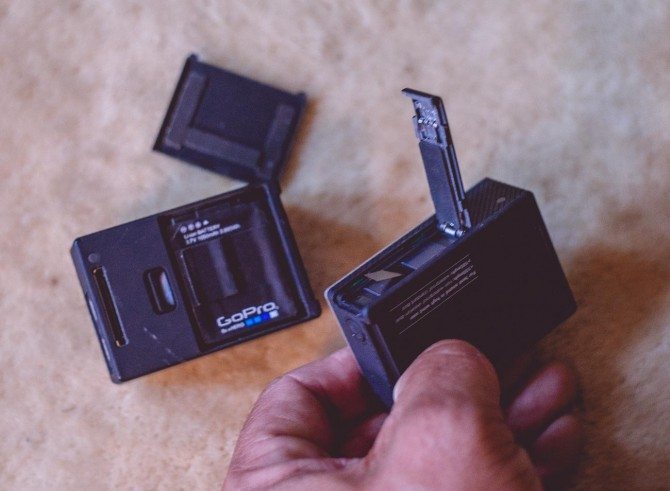 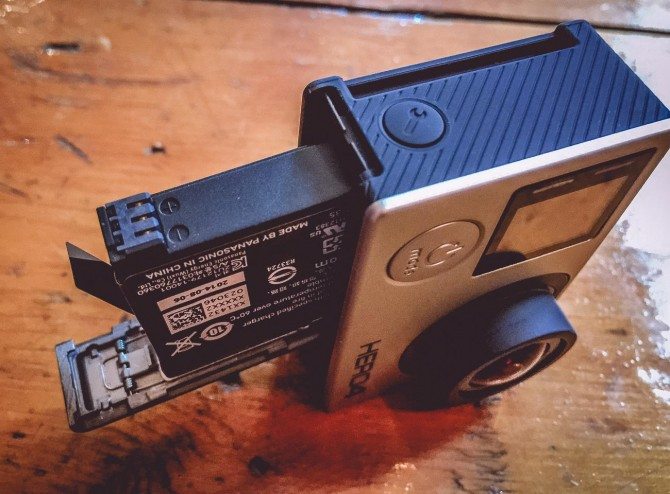 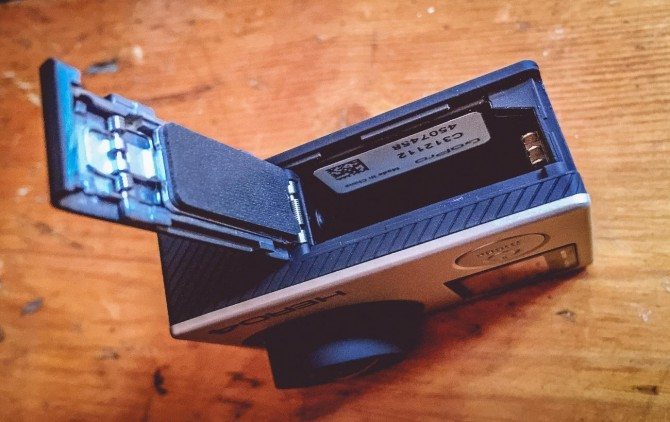 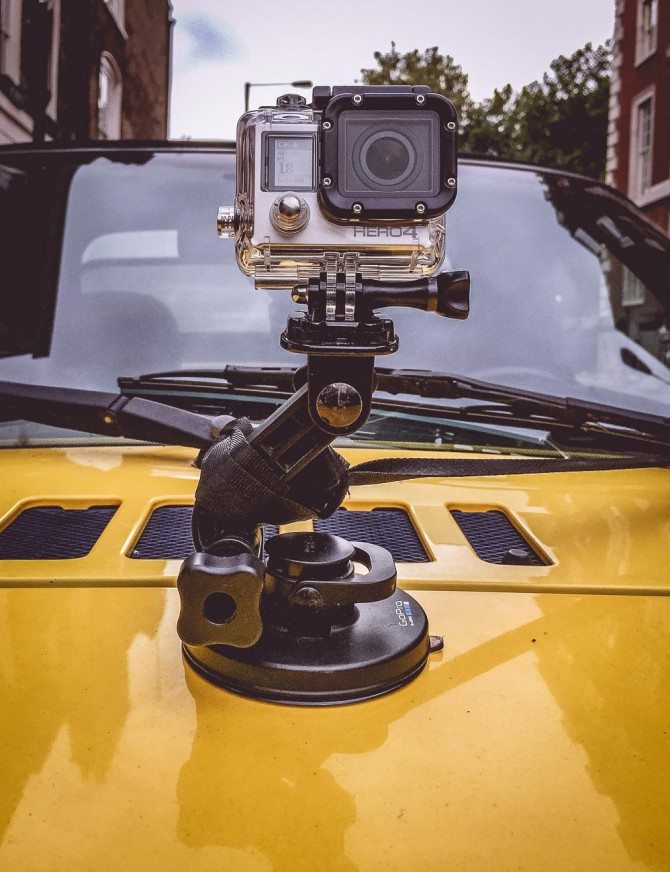 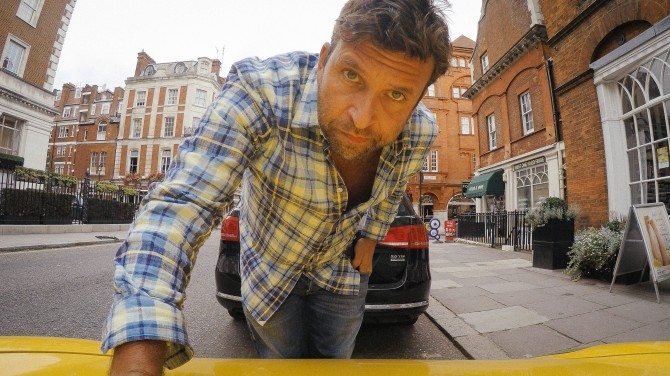 The first thing I did after rapidly unboxing it was simply attach it to my Fiat Barchetta and drive through London with it in 4K mode.  The GoPro App wasn’t working with the 4 at the time, so I couldn’t see exactly what I was doing or remotely stop start it. The app of course will be full compatible when the 4 is released. Still, I got the framing pretty good considering, as you can see below. This is ungraded and untouched, shot in 4K 25p in ProTune flat medium sharpness (next time low is recommended) and ISO max set to 400. This works well when you get to the end of this clip as I go into a car park.

I am not sure what other manual control there is apart from setting the max ISO. Setting it as low as 400 is great and wasn’t available with the 3+, but I would have loved shutter speed control (aperture is of course fixed) and electronic ND. One of the biggest giveaways of GoPro footage is that high shutter speed. Yes you can use clip on ND etc, but I was hoping for something internal to help teo. If it really is just limiting ISO then that’s a shame. I will need to look into this more. 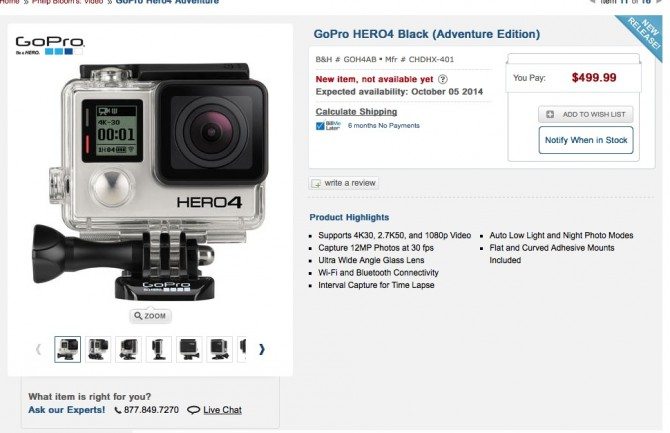 Naturally, this was what I was most excited about. Using my Phantom 2 with it. It’s the same size and seems very much the same weight, plus it has the same rear connector for most of the ZenMuse Phantom gimbals out there. Although my H3-3D is the newer one, that has removed the rear connector and replaced it with the side connectors and a thin piece of ribbon. It’s a shame, as it’s nowhere near as robust, but the reason is to make it compatible with DJI’s excellent “Lightbridge” HD video relay system, which is what I used it with.

So the new GoPro 4 appears to be fully compatible with the H3-3D, and of course I would assume the H3-2D…when I say appears to be, as mentioned above I have only used the newer version of the H3-3D. I have not tested it with the older one. 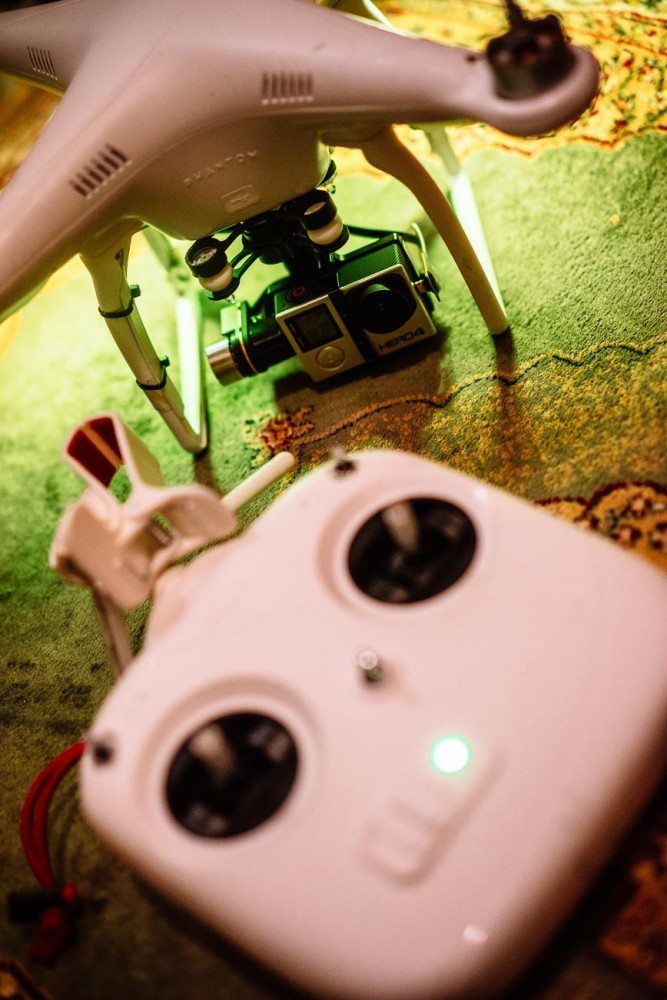 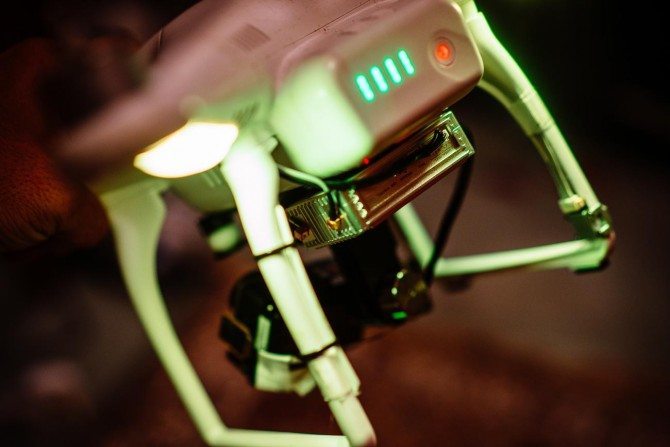 Lightbridge gives you a massive range for first person view with crystal clear 1080 image, all the telemetry you would get from the iOS, plus you can also plug it into your smartphone and use that as a monitor (or just use an HDMI monitor).

The image with lightbridge from the Phantom is perfect. It’s pricey though, so not for everyone. Its quality is equivalent to the Vision series setup, just with a much bigger range.

Unfortunately the software needs to be upgraded for the GoPro 4, as the image froze as soon as I hit record which was a pain. Flying blind isn’t much fun! I am sure it will be fixed soon though.

The shots aren’t exciting, just a few to test out and share. This is not a “piece of art” – this is a camera test, and given I couldn’t see what I was filming due to the above issue, it didn’t turn out too bad! I just was always behind the Phantom using line of sight for my composition. 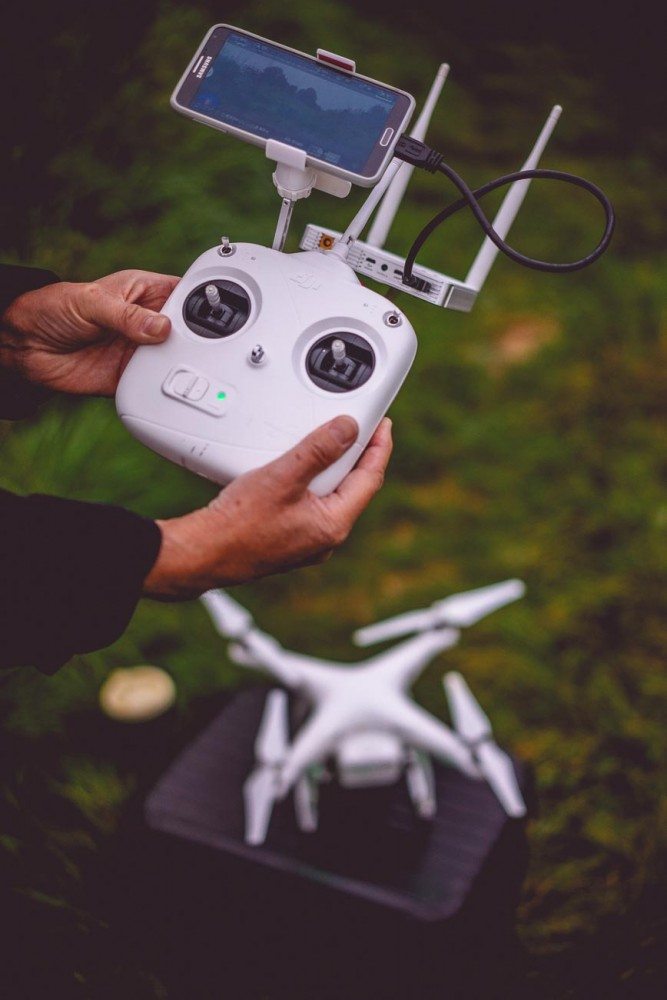 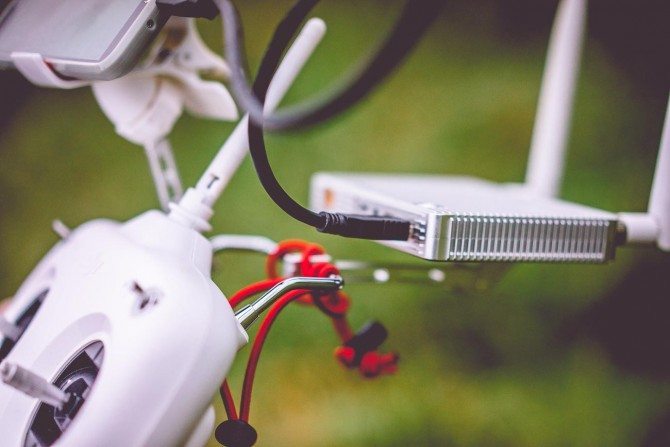 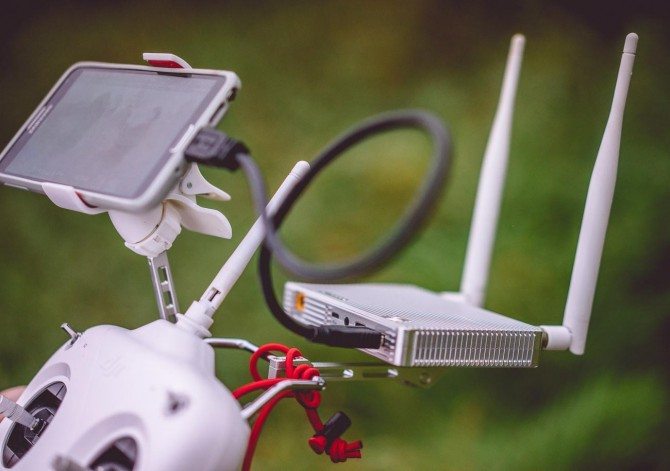 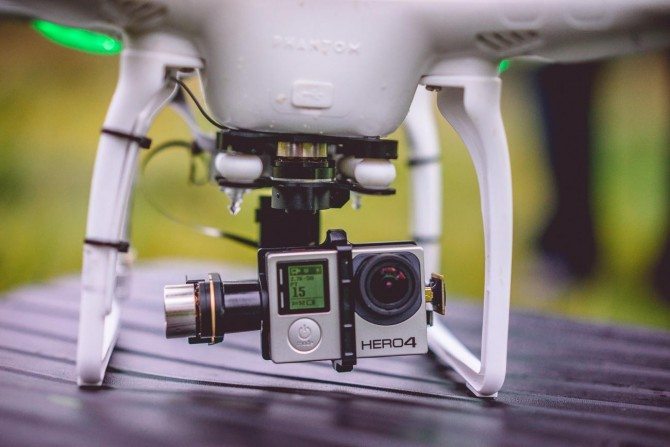 Initials shots with GoPro 4 in 4K with DJI Phantom 2 with Lightbridge from Philip Bloom Reviews & Tutorials on Vimeo.

The sensor inside the GoPro is TEENY, and to squeeze 4K onto it is a fair bit…what’s the key though is the bitrate. With GoPro, we don’t have shallow depth of field. It’s all deep depth of field. Deep depth of field generally means more detail, and more detail means harder on compressed footage. I have been getting around 60mbit/s which is not that much really. For HD fine, but for 4K? The shots I did in the park  are clearly a struggle with all that information. I need to do an HD/ 4K comparison of the same shot to see which fares best. I feel the HD one will, as the ProTune bit rate for HD is around what I am getting for the 4K, yet for an image 4 times the size? The version you can download from Vimeo is not an original clip from the Phantom. I will add that as soon as I can.

My feeling from this is that I will use 2.7K  50p mode mostly (48p if shooting 24p), as the detail is excellent and the codec can handle it. I am not giving up on the 4K yet, but it does seem to be a bit much for it, certainly in the conditions I tried it with. Having 50/48p in 2.7k is a big plus from the 3+, as this resolution was always my favourite for details and lack of image issues, but it couldn’t do more than 30p before.

Below is a short test clip showing this mode (although Vimeo is giving me grief with the quality of the conversion, as it looks a bit shit here! I am working on it!) 🙂

I will add to this flying section when I have done more tests.

There was talk of a 240fps mode in 720p. I can’t see it. There is 120fps in HD now though, although the aliasing is pretty bad from my short test…I will look into this more and report back.

That’s it for now, work has gotten in the way,  but I will keep adding constantly including more clips 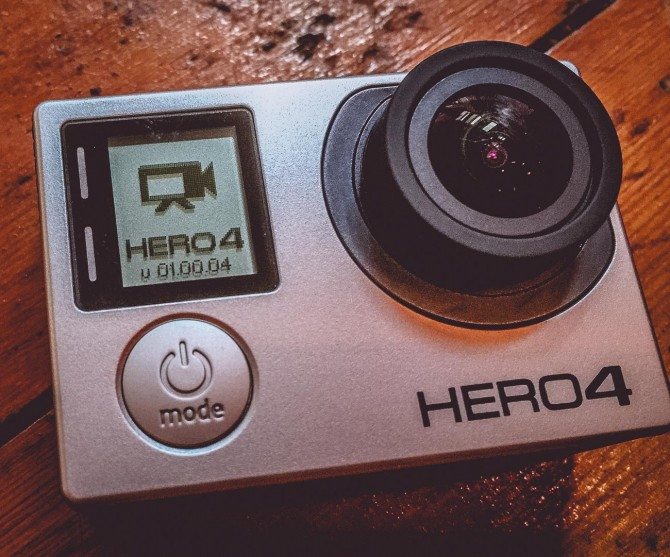 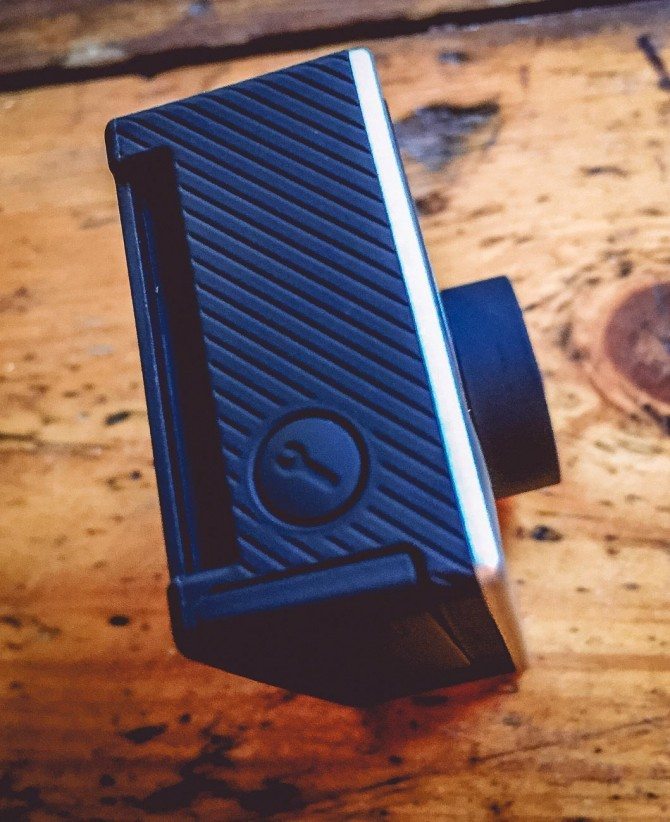 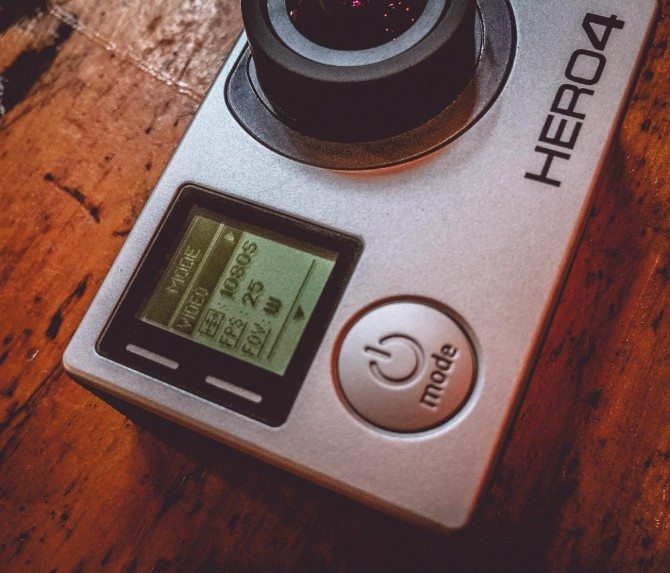 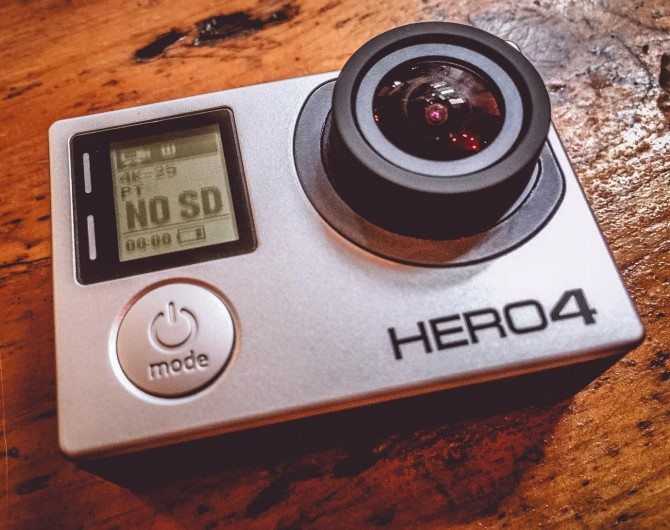