Unfortunately it came a day late to be used for our music video but the lovely Kanta Yamamoto from Sony Europe popped over to my house this afternoon on his way home to drop off a pre-production FS100 to me to play with for a couple of days. Kanta recently moved from Tokyo and now lives around the corner from me in Richmond, so I think I will be bugging him A LOT!

So far I have only see one independent review of the FS100 and it was utterly scathing. I took it with a pinch of salt and rightly so. After just 30 minutes of shooting with the FS100 it’s nothing like Nigel Cooper paints it as. It feels well made and the buttons are just fine!

Yes, the form factor is different and it is missing some key features. The Hassleblad style is interesting. To be honest the first time I saw it It reminded me of the old HI8 Sony Video Walkman from many a moon ago…check it out below and the FS100 next to it!

But…actually the form factor interests me. I own both an AF101 and a Sony F3 and they have more traditional form factors but they suck to be honest. The only decent form factor is a shoulder mounted camera, everything else needs to be accessorised to make them work properly. The FS100 in many way is a little like a poor man’s Red Epic in it’s stylings. Very modular. You build it up the way you want it as there are lots of screw holes all over it.

I can’t talk about the picture quality too much as I have not done any proper HD shooting with it yet but it operates just fine. The menus are easier to navigate than the F3 due to not being stuck with just a wheel like the F3 there is a control pad on the top. The LCD screen is pretty damn good and with the clip on viewfinder it becomes superb, with one caveat. By being on top of the camera it makes it impossible to use the camera with the viewfinder on a tripod higher than you as the it cannot tilt down!

No ND filter wheel is a bummer. The reason being to keep the small body there was no space for a filter wheel, but this really is a pain for me. I miss ND filter wheels on DSLRs and it’s one of the loveliest things of the Panny AF 101. 4 stage filter wheel…like a proper camera!

It has the same Super 35mm sized sensor as the F3 but different processing. It has no SDI out, just HDMI and it is only 8 bit 422 even though HDMI can do 10 bit 422 because the processor is only 8 bit. Compromises have had to be made to slash the price down from the F3.

One SD card slot is a shame so no continuous internal recording. Batteries are the legacy NPF batteries that I have from my old Z1 and they last about 8 hours for one NPF 970. Fantastic.

The one I have is the US version so no 25p. The EU version will be 1080p 25p and 50p but i was told they plan to add 24p via a firmware update later (charged firmware update?). I personally HAVE to have 25p for my UK broadcast work. I also need 24p for my US work…let’s hope the firmware does come out.

Pricing is around $6000 I believe and we are looking late summer for release.

So keep an eye on this blog and I will update with my full review soon. Tomorrow I compare the camera to my AF101 and F3 with the same Zeiss CP.2 glass on both internal recording and using the Atomos Ninja. Be interesting to see. 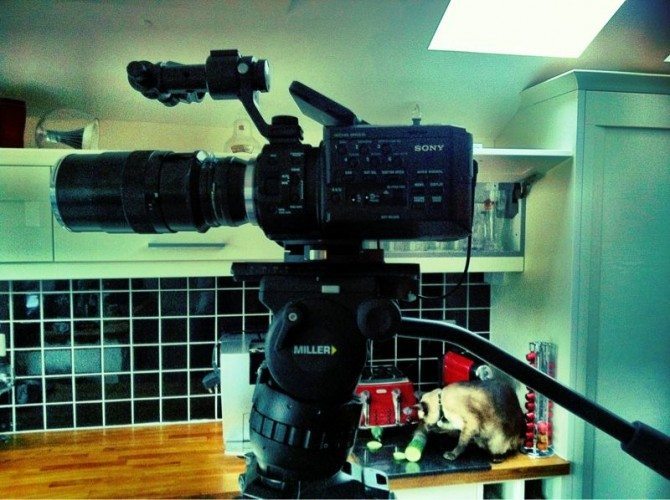 So in the meantime check out this little bit of test filming I did with the “smooth slow motion” mode of the camera using a Nikon Mount Zeiss 100mm Macro. I don’t know what the recording resolution is but the bit rate is only around 12 mb/s. It looks like a bit better than SD up-rezzed to full HD recording 120FPS in a 60i stream. I imported it as 30p full HD and using cinema tools conformed it to 24p so it is now 150FPS. The picture quality is just OK in this mode as was expected. It buffers for about 3 seconds and then records 12 seconds of footage to the card. The Sony Z7 has a similar function with the CF recorder. It’s no phantom and the 1080 60fps is WAY superior. But it’s a nice thing to have in their for fun and that’s what the below piece is. Just a bit of fun…Check out this blog for updates and my comparison blog of the F3 vs FS100 vs AF101 blog too! I shoot properly with this camera from tomorrow!!