You can win incredible gear or software worth thousands by donating to the prostate cancer fundraiser here! Great cause great prizes!!!

My south Africa workshop tour is almost over. Johannesburg and Cape Town are wrapped with just Durban left, then off to a game reserve for a few days. There is some space in Durban, if interested click here!!
Teaching is enormous fun…but the idea of coming to South Africa and not creating films or telling stories would have been upsetting. So I have set out to make a short doc in each of the places I visit. Durban may be tough as I am there for such a short period of time and have no full day off…but I will try. There is always the Londolozi game reserve afterwards.
For my Cape Town film I really didn’t know what I wanted the story to be about. Johannesburg was the epic Ponte Tower doc which in underneath this film…It was an uplifting film about a miserable place, with epic visuals...all shot on the Blackmagic Camera. I wanted something so utterly different…and something that didn’t simply tread over familiar ground. Ponte had not been done astonishingly enough! Most of the stories suggested to me for Cape Town either had been done or simply didn’t connect with me or excite me.
We were heading out to try and find something as I only had the one day off to get the film done…we went off to pick up Humphrey Bande who knew a few people, to see if we could find something. Dale then pulled up outside the place where Humphrey was working, a theatre. I said to Dale “Is this an old movie theatre?” he replied “no, but there is one here just like that”. I knew straightway that was what I wanted to go and film. An old celluloid movie theatre. The type that have almost all gone these days. I really wanted to make this film before they have become extinct.

Heading off to the slightly ooh-aah named “Labia Theatre,” we found out that Coco Van Oppens (who I knew and was taking photos of the workshop here) knew the owner. So she phoned up, explained and we were in.
Straightaway I went up the projection booth to meet the projectionist Redwaan (I thought he was called Red One which made me chuckle!) He was a delightful man who had been working there for 24 years but been in projection booths since he was 7. We talked, I explained what I wanted to do, he was a little bit nervous but said OK. 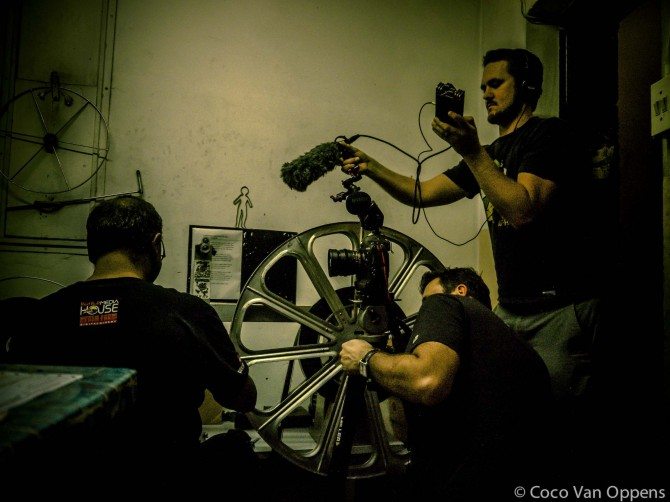 So using the loaned 1DX from Canon South Africa (mine has gone kaput and needs to repaired back home), a few lenses, my Zacuto target shooter rig / Z finder, Miller DS20, Roland R26, Sanken Cos 11, Rode NTG2 and Rode Stereo Video Mic pro, we started filming.
We had no additional lights with us, as the plan had been to shoot outside…so now that I was faced with a more challenging situation, it was a case of getting Redwaan to stand in the right spot to make the most of the available light….bouncing a 3200k spot fixture onto a wall to give Redwaan the key he needed and shooting at 1250 at F1.8 (slightly too shallow to be honest, as focus was a little tricky) I got a nice looking shot…except no catchlight. So I got Humphrey to hold a movie poster the white side forward and up high to give that essential catch light into out subject’s eyes…so important, as without this the eyes are lost.
Audio was recorded on the excellent Roland R26 external recorder and the lovely Sanken Cos11 lav mic hard wired in. So warm and rich, that mic!
Reference and back up b-roll sound was the excellent Rode Stereo Video Mic Pro.
12 minutes later, the interview was done and one of his films was late to start! 🙂
Redwaan was a pleasure to interview. Really warm, honest and genuine. He had a huge number of rich fascinating stories. As a huge film buff, listening to them was a massive pleasure. What we had in this theatre is so special to me…it’s places like this that made me love cinema so much and made me adore film in my eternal quest to make my video look as much like film as possible.
After that, it was time to get the awesome Canon 100mm L macro out and film lots of details of the projector and film itself! Such wonderful machines! Dale did record b-roll on the NTG 2 too, but I actually ended up using the sound of the Stereo top mic as it sounded pretty damn good, since I was close to the audio source.
A few handheld shots on the Zacuto rig of Redwaan resetting the projector next followed by a little bit of splicing and we were almost done. A shot of him from inside the theatre looking through the window and the job’s a good ‘un!
Two hours after arriving, we were wrapped and we had a great story. I did do a few extra shots in the lobby, the concession stand, ticket booth and inside the theatre, but they were totally superfluous for the story I wanted to tell. Best to get them just in case though…you never know!
Shooting tight and fast is what I do. Having a news background taught me well. I don’t need to spend all day getting in their way at the theatre. I don’t need to shoot 6 hours of rushes. I don’t need to do a 2-hour interview. I just need enough time. That’s all…and what I got was easily enough. I know when I’ve got what I need…that is when I stop. This will come to you with experience if you don’t have this. Always better to overshoot than undershoot though!
I adore the image out of the 1DX and I still love to shoot on DSLRs. I love the size and the freedom it offers you. My C300 is still my favourite camera, but I didn’t bring it with me. It was that or the FS700, and super slow motion would come in super handy for the Safari shoot and for the workshops…BUT that full frame image…yum! The Mk3 image is great, but the 1Dx is exceptional and very filmic. That is why I bought one.
Yes, it still means dual system sound, but that’s pretty easy. (although nowhere near as easy as XLR inputs on a proper video camera!)
That full frame look cannot be replicated by a super 35mm sensor, it’s so unique. I love it. That is why there is still a very massive use for DSLRs in real work, mainly the full frame ones.
Lenses used were the Canon 50mm F1.2 for the interview. The Rokinon Cine 24mm T1.5 for the walking shots. The Canon 100mm L macro for all the detail shots. The Rokinon 14mm Cine T3.1 for the two massive wides. For the shot of Redwaan in the booth from the theatre, I used my 70-200 F4.
All editing was done in CS6 and all grading in Colorista II. Film grain was added as a mark of respect!!

Film is sadly dead now. This breaks my heart – it has been so important to me growing up and basically is the reason I am doing now what I am doing. This film captures the last dying heartbeats of a magical thing and the joy and sadness of a man who symbolises the love that we have for this wonderful thing called film. I hope when people watch this they will remember what seeing a movie on film actually was like and how special it was. Most of us won’t ever see a film projected on 35mm ever again. That is terribly sad thing. 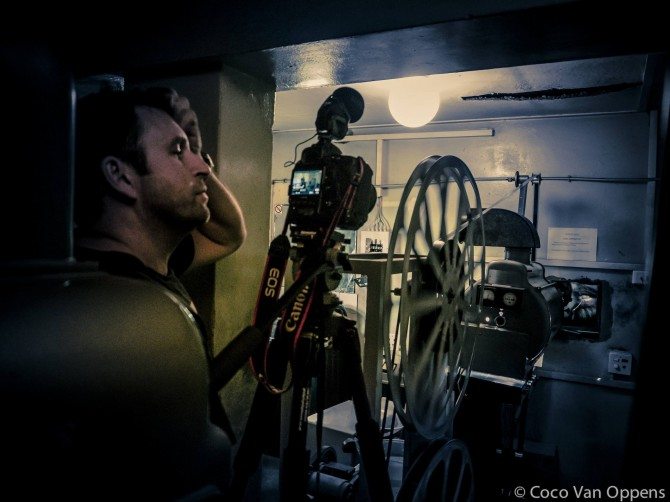