I popped down to Broadcast live today at Earl’s Court. Kind of a small NAB/ IBC, but the biggest thing we have in the UK. Many large manufacturers were there like Sony, JVC, Arri, showing off their latest and not so latest toys!

Here is a rundown of what caught my eye whilst I was there.

By the way it was great to meet the large number of people who surprisingly knew who I was from this website! 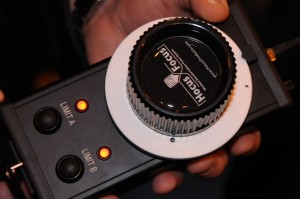 This is a completely wireless affordable follow focus system, perfect for using on steadicams and other applications where remote follow focus is needed. It’s still in prototype stages but was pretty slick already and did the job perfectly for a fraction of the price of the competitors. It was good to meet Peter after conversing with him so much over the forums and emails. He has made a breakthrough product himself and I truly applaud him for it. It’s a cracking piece of kit!

The control knob is the same one used by Wayne Kinney of Shoot 35 so you know it’s quality. 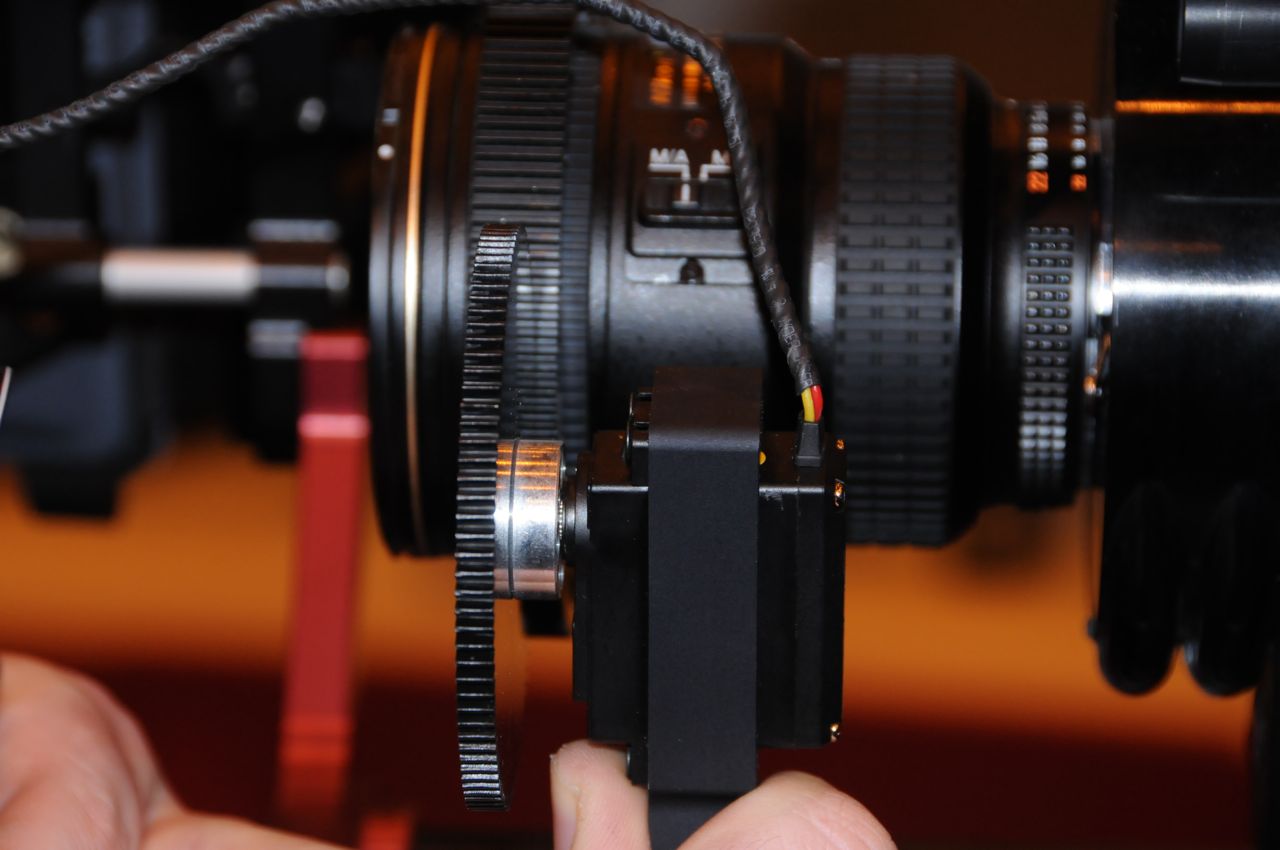 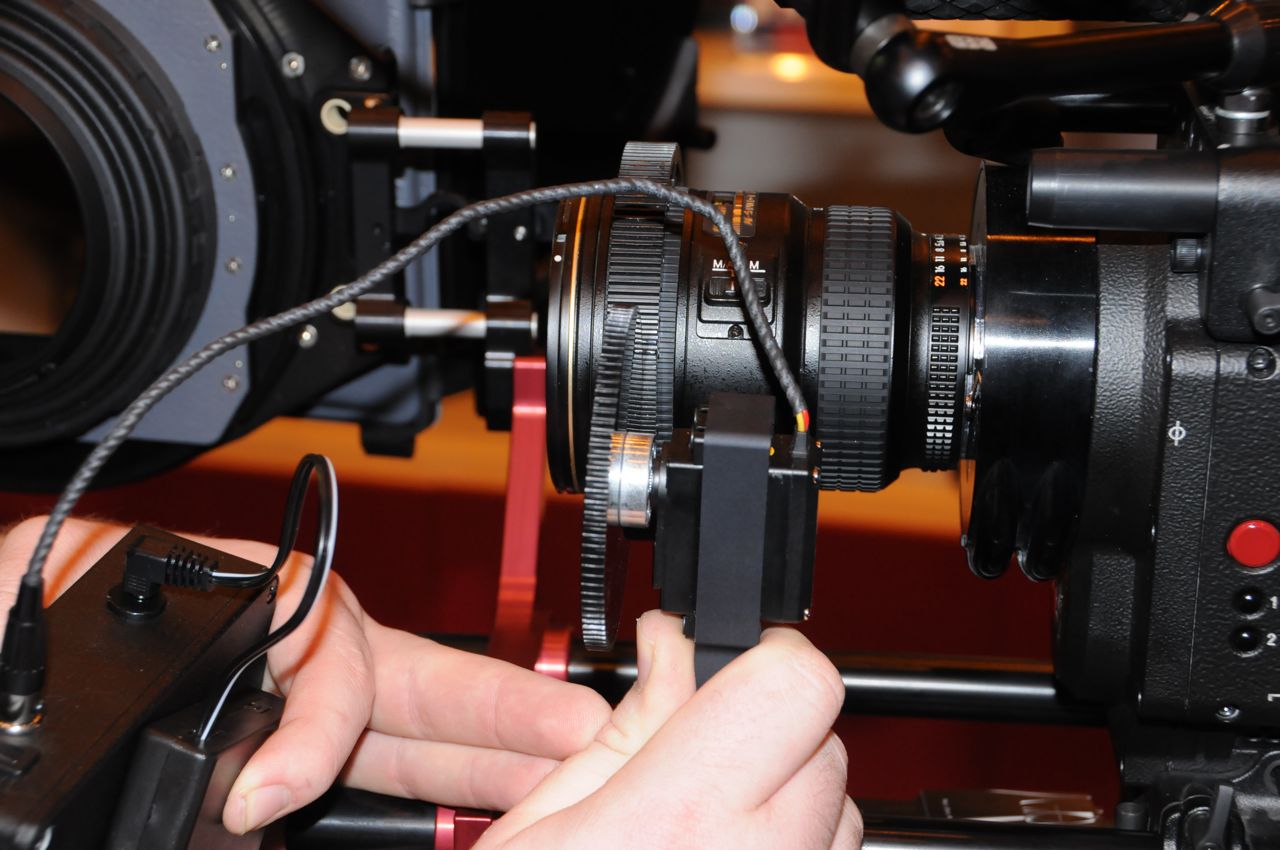 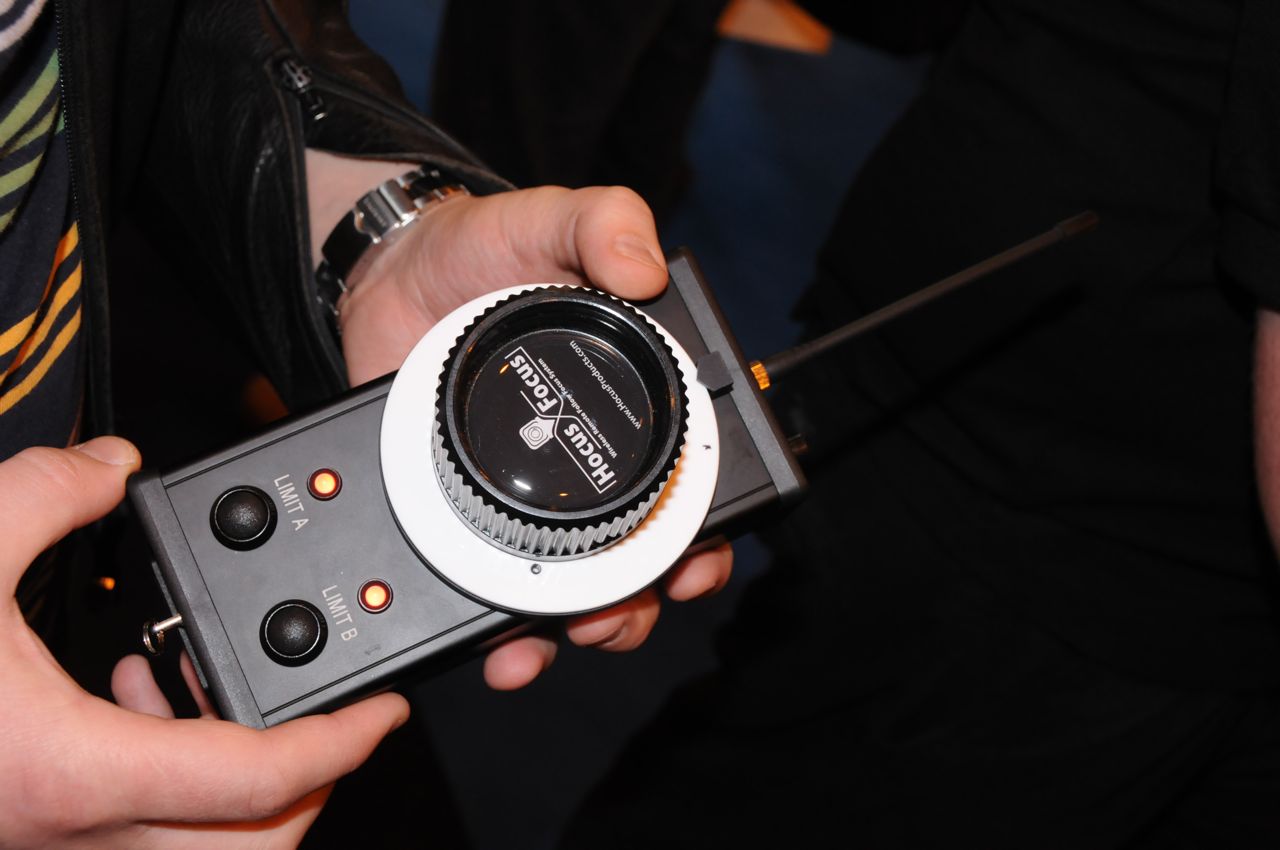 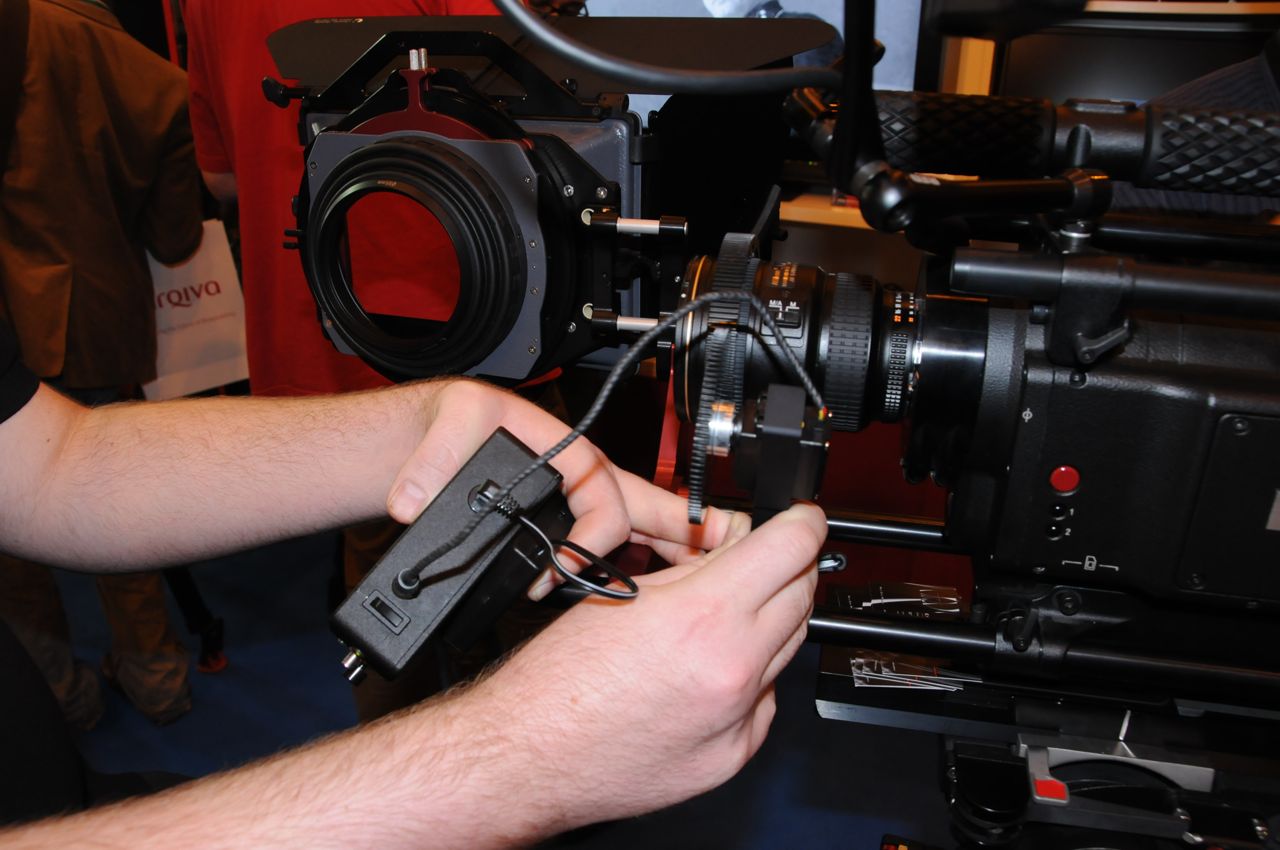 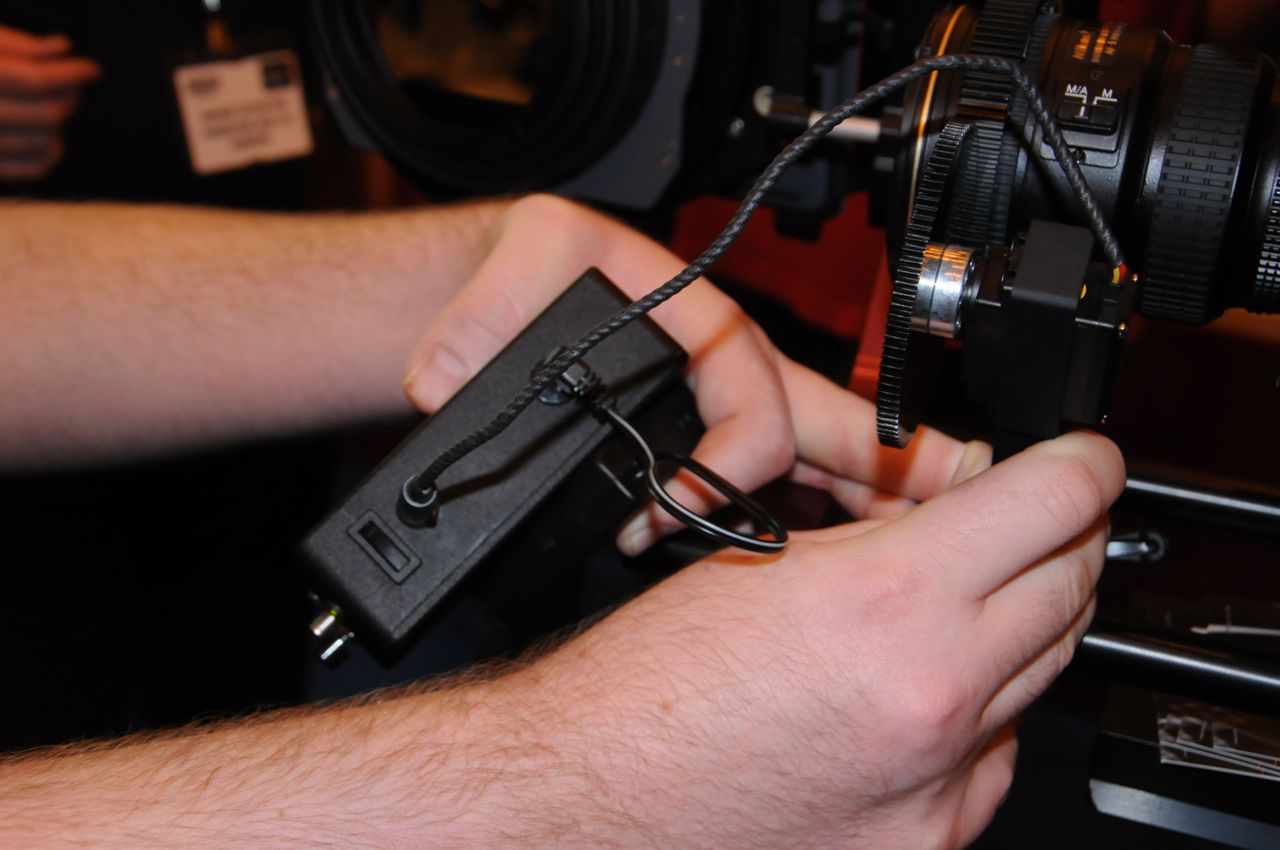 This product has the potential to be massive. It undercuts the competition by an enormous margin but still gets the job done and done well. I will be taking a close look at this product in the near future.

Next up is the new Redrock Micro M2 Encore 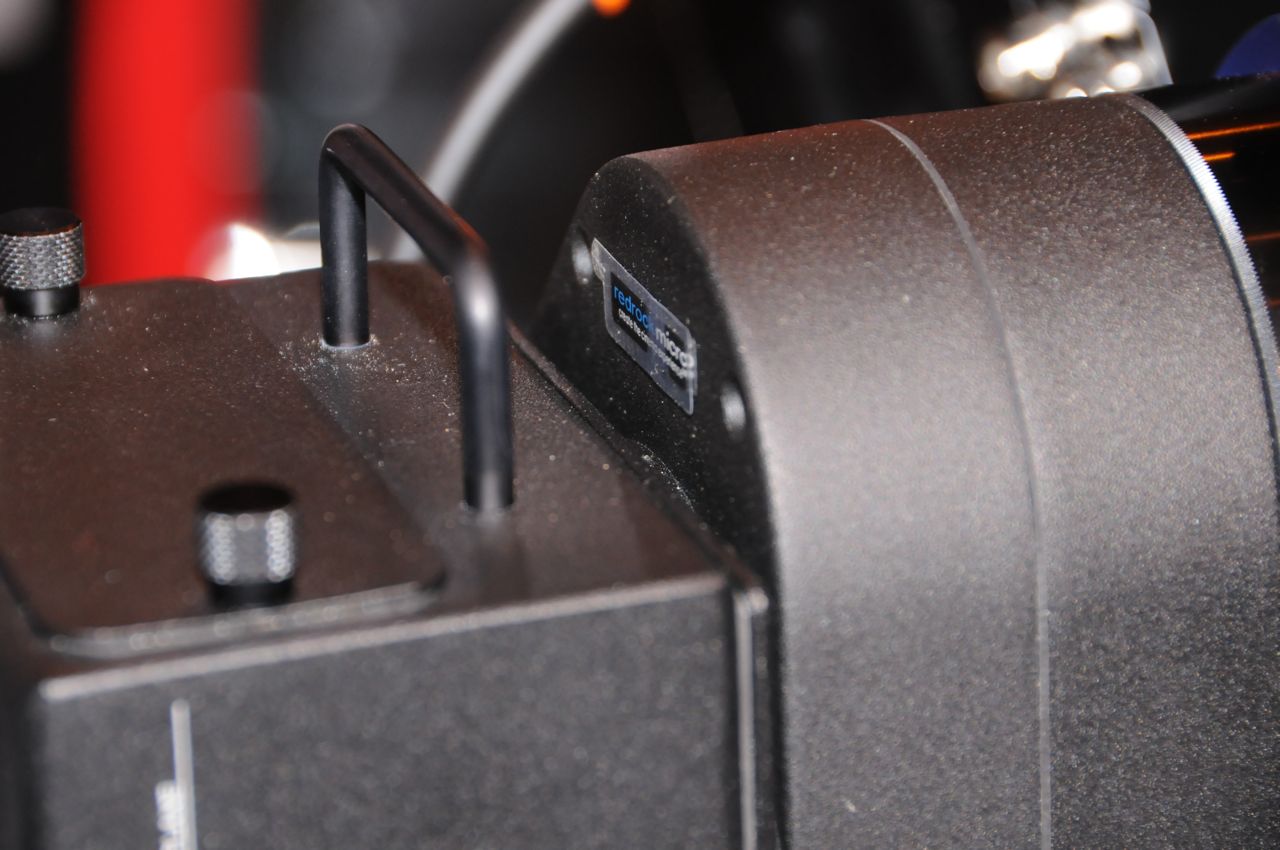 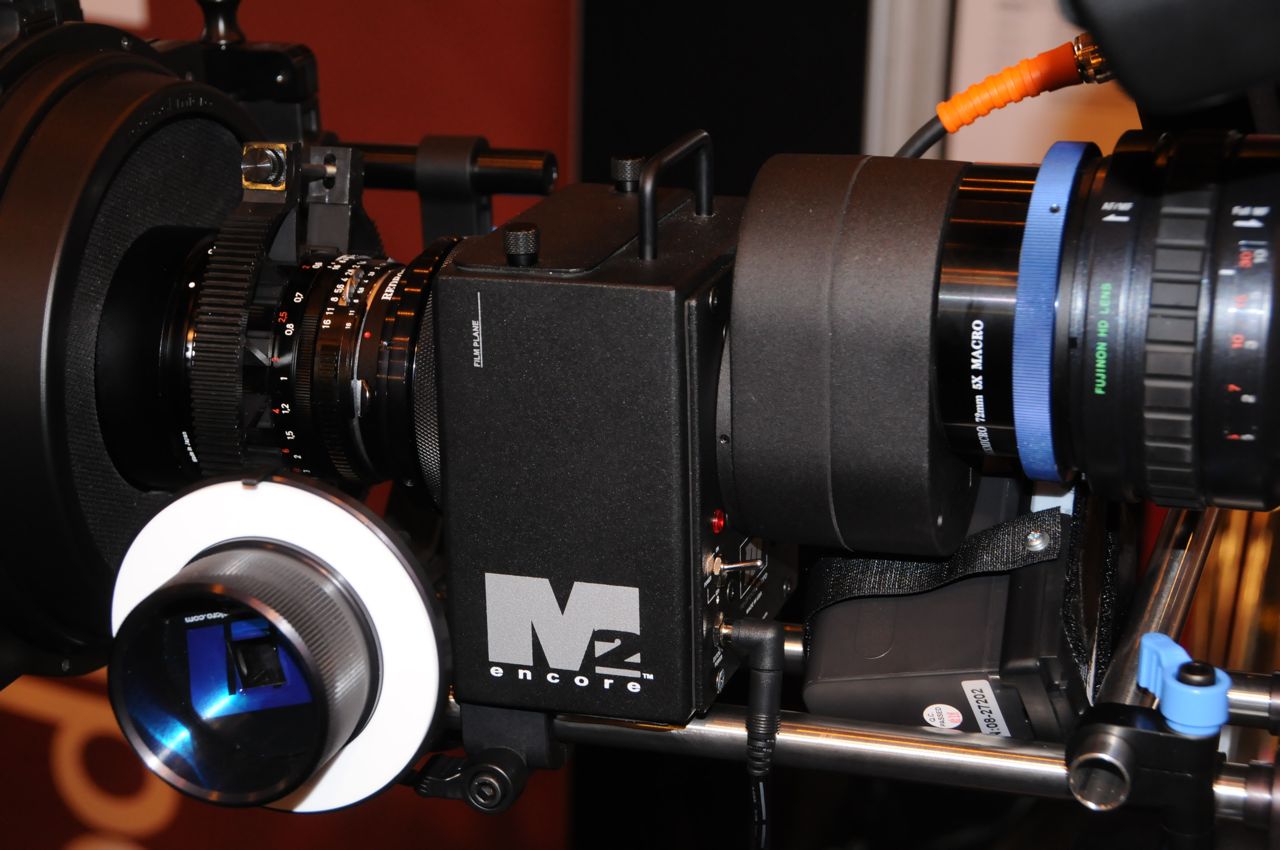 This was on the production gear stand. I believe Brian Valente from Redrock will be there tomorrow. I didn’t get to do much with it apart from point it at a dark wall and still get exposure. Something the old M2 couldn’t have done. I have no idea how sharp it is or anything else, I would need to play with it for a couple of days to do that.

It looks much like the M2 for upgrade reasons. Current M2 users can send their old ones in and pay to get the guts removed and replaced with the new components. A nice affordable way to upgrade without having to buy a new one. I will probably get my two upgraded and buy a flip module for it, I am the Imelda Marcos of adaptors! You can read more at www.redrockmicro.com and their Uk distributors, Production Gear.

Next up was the JVC stand

They had two new cameras the small GY-HM100u and the GY-HM700u. Now these are both very interesting cameras. I own a JVC HD201 and think it has a lovely image out of it.  I have used it for many projects but it is 720p only for HD. The two new cameras shoot full HD but I don’t think they have native full HD chips, they use something called diagonal offsetting…sounds a bit like what the HVX200 does to HD. Please correct me if I am wrong. Here is the link to the JVC website. 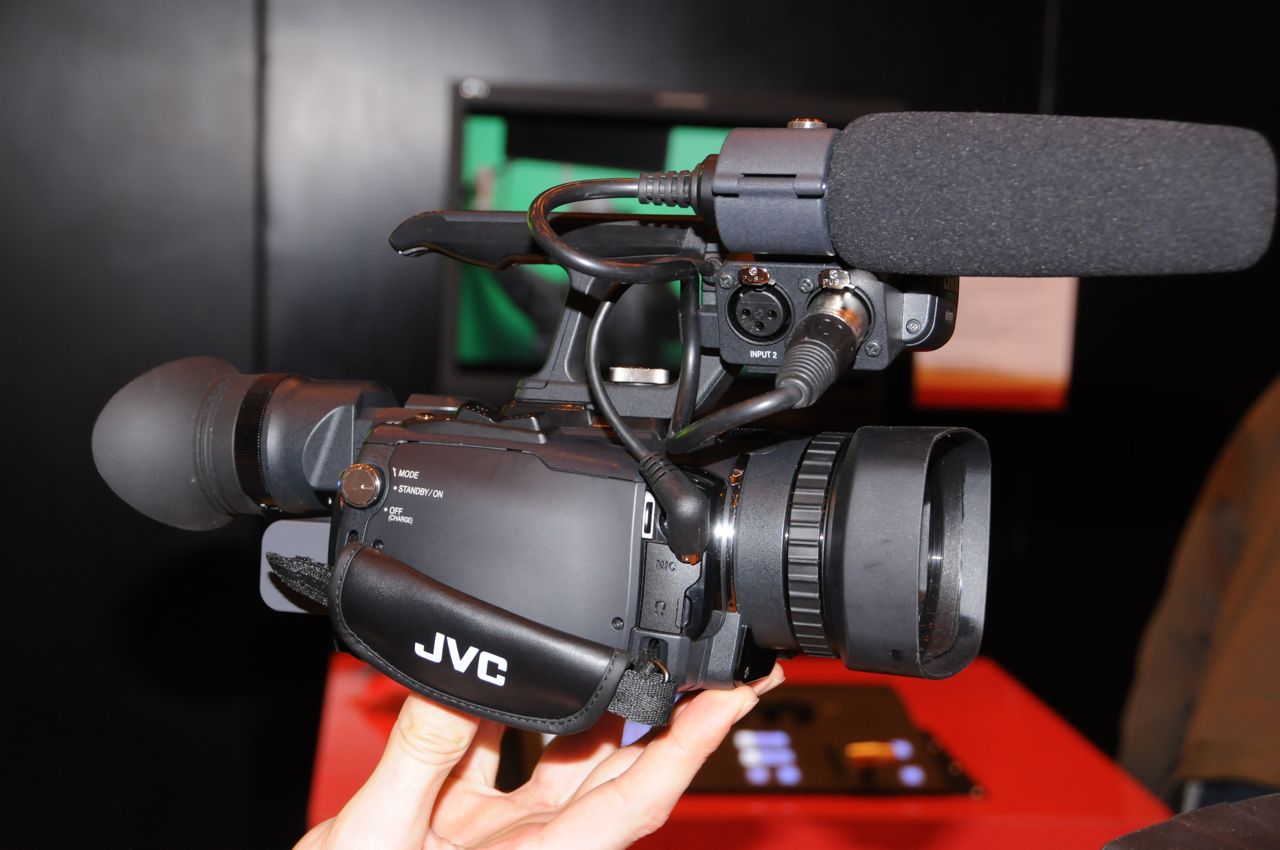 Now the 100u is Sony A1 size. 1/4″ chips unfortunately but if records in XDCAM EX equivalent 35mbs NATIVE quicktime which means NO TRANSCODING or re-wrapping. It’s built for FCP.

It’s tiny, has a removable XLR block at the top like the A1, has two slots for SD cards, that’s right it shoots on SDHC cards…so very affordable! It also has a switchable focus/ zoom ring and a way of manual controlling the iris at the back of the camera. There is also separate gain controls which is much appreciated if you have ever used an A1 as it’s just called exposure there, combined gain/ iris.

Now this is the smallest camera ever to record 35mbs so pretty impressive. This is an HD only camera, so SD mode.

The 700u is also very interesting. Same form factor as the JVC201 but a higher rez VF, a massive LCD screen. 1/3″ removable lens, 2 SDHC card slots again, ability to stick an SxS recorder on the back, It overcranks to 60fps and undercranks to 10fps. It doesn’t shoot SD again.

It’s a nice looking camera to use. I asked the JVC guy how was it in low light? Is it better than the 200. He wasn’t sure and thought it was the same. I hope not as the HD200/201 is quite bad in low light. But he also said side by side it was comparable to the ex3 which confused me as the EX3 is exceptional in low light…I am hoping to get demo units of both cameras to do proper tests on. 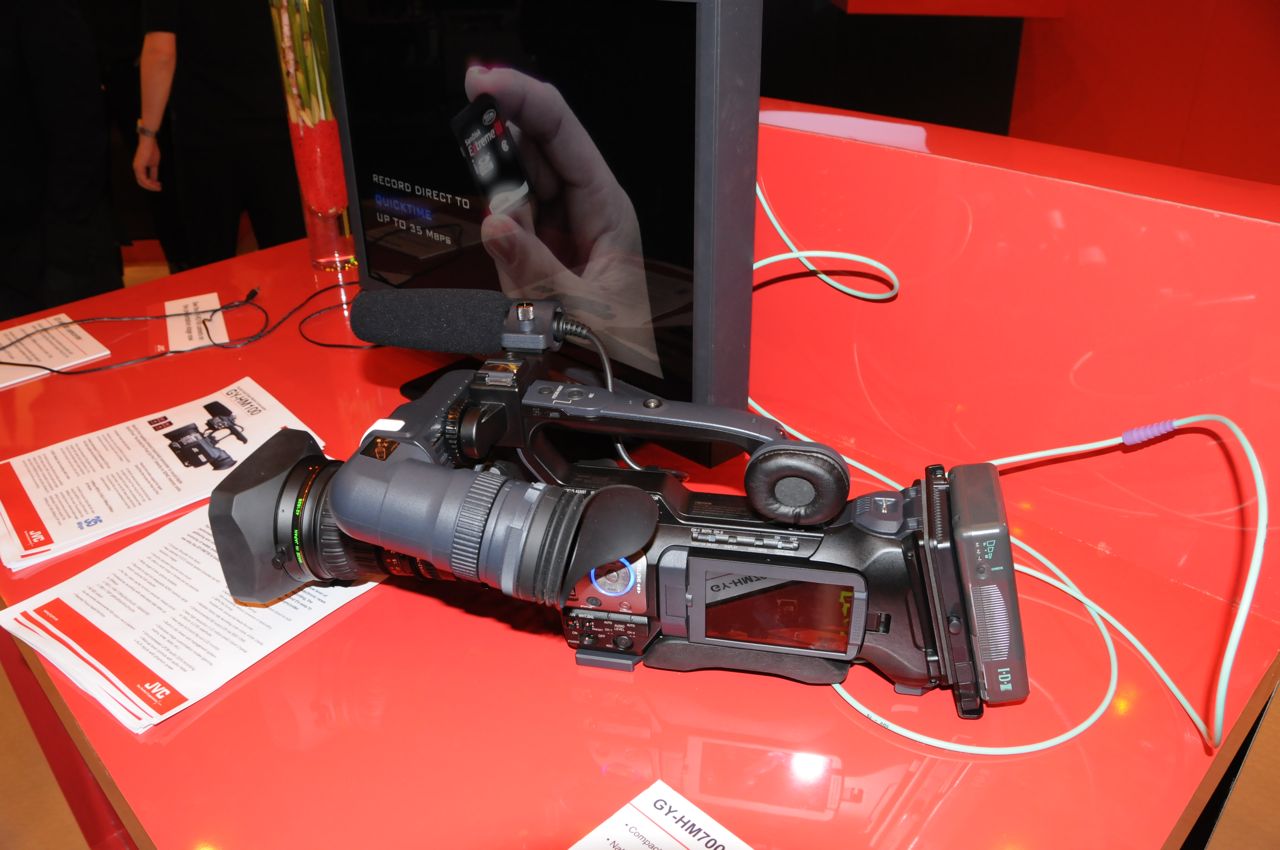 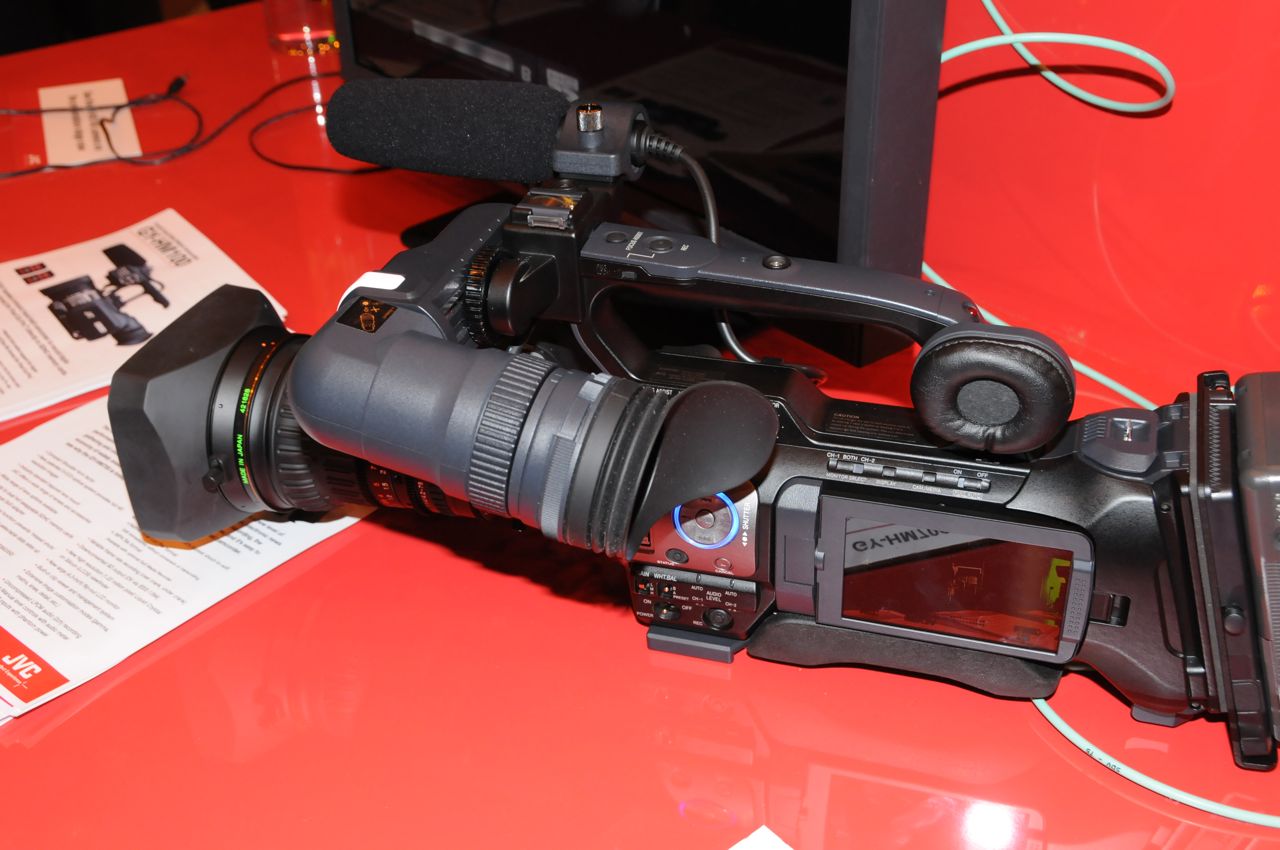 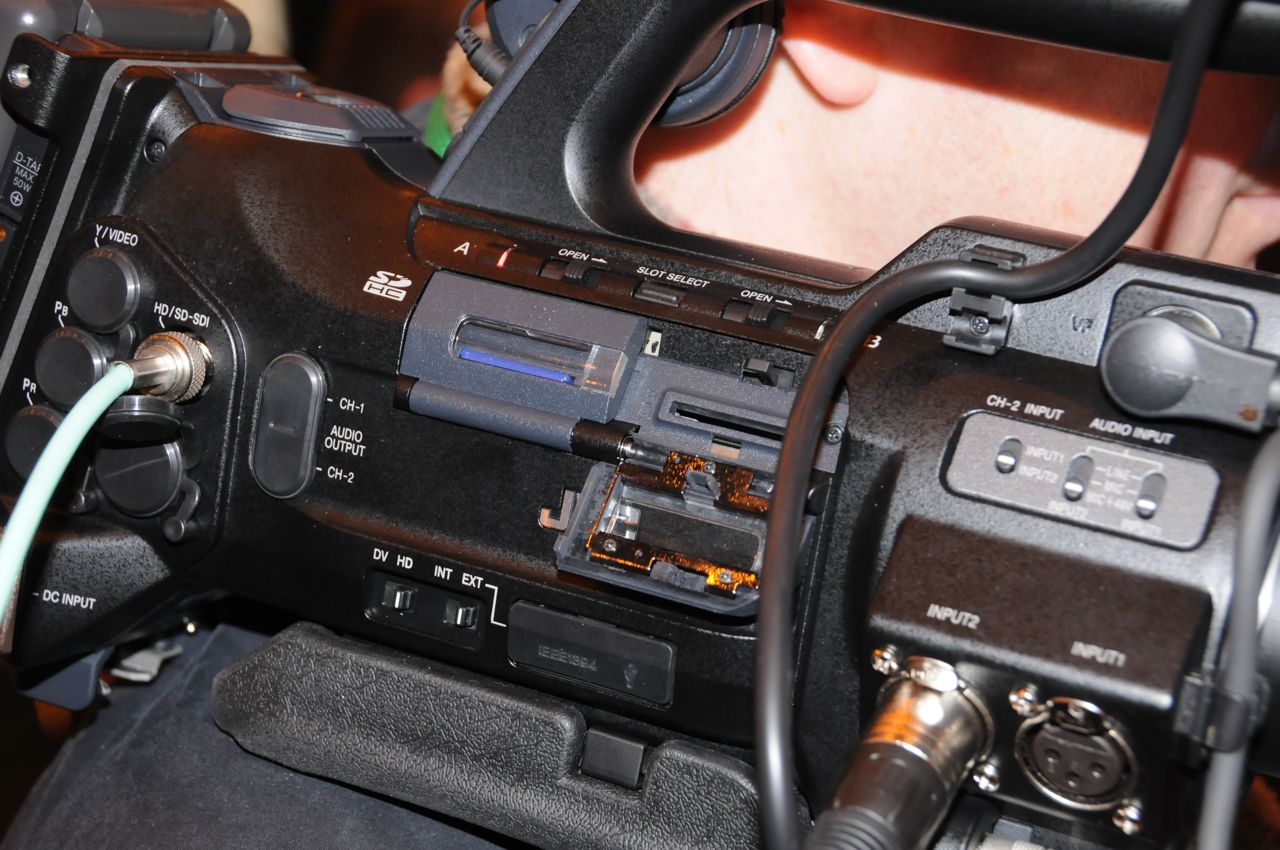 It’s exciting to see another tapeless camera come out and one that is so geared to us MAC FCP users. You really are going to have super fast workflow with this and the media is so cheap you could keep the cards without erasing them if you really wanted to, but that goes against the whole point of tapeless!!

I received an email saying the camera would be at the show, but the Panasonic stand wasn’t there! I asked around and nobody had seen the camera. I finally tracked it down at the Panasonic presentation area where they had one camera which was being taken around to be shown to people.

It’s a big camera, bigger than the JVC but not as big as the HPX500. I couldn’t turn it on as it had no battery so I just had a fiddle and it looked really nice, but it was off!!

I REALLY wanted to turn it on though and have asked if they will let me take one for a test drive as am very interested in it…Hope they do!!! Check it out on their website…

Sony had a big stand with most of their toys on there. Nothing new to report but told XDCAM main man Phil Myers would love a shoulder mounted SxS camera comparable to the HPX301e…who knows. Don’t ask, don’t get!!

So pop over to BOXX stand and meet Peter and his Hocus Focus. Try and find the elusive Panasonic. Take a look at JVC. Also worth checking out CVP Mitcorp Dennis Lennie’s presentation on Tapeless Made Easy.

Loads of stuff worth seeing there. Definitely worth a trip to London (unless you live in Australia!).

Oh and it was great to see Director Joe Shaw, him of “The Echo”, haven’t seen him since we shot that short film almost a year ago…how time flies!!