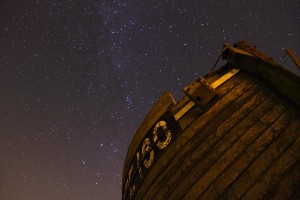 Tom @ Timescapes really is producing the best moving nightime timelpase photography I have seen. He inspired me to go out last night at 1030pm and drive for 90 minutes from London to the coast and test out long exposure timelapses with the Canon 7d.

I did my first timelapse with the 7d (never done any with the 5dmkII) last weekend in Sarasota whilst filming my 7d Video training DVD. It was a very simple shot with exposure set to 2 seconds and a still frame shot every 2 seconds so I have nice motion blur.

You see timelapse with stills cameras is really amazing and blows away what you can do with video cameras like the EX1, although it’s a lot harder work and you end up with massive files in post.

Now Tom does amazing night sky stuff and in London we don’t see the night sky. Light pollution everywhere make seeing the stars pretty tough. Couple that with crappy English weather with clouds covering the sky most of the time and really it is not an option.

I had this crazy idea at about 930pm last night ,whilst sitting at home in the warmth of my home with my cats next to me asleep and loads of good TV saved up to watch, to get in my car, drive for almost 2 hours to the coast, to Dungeness in fact , which is my favourite UK filming location as it’s just so damn spooky, and do some experiments and see what I could get.

I had already been at my parents near there the couple of days before too and which made the whole thing even more daft. I had popped home to feed the cats and it looked like I was off out again. Grabbing the 7d, a few lenses, lots of batteries, my Miller DS20 tripod, my intervalometer and a warm coat I jumped in the car at 10pm and headed off. That is what I am like, filming fires me up like nothing else.

I did some very silly audio blogs whilst on my way there to keep me awake and whilst down there to alleviate my utter boredom. You can listen to them at the bottom of the page. They start off very normal and straight and get slightly more insane the later it got and the more bored I got. I loved the fact that this lovely guy I know called Dennis Kane from SF who follows me on twitter wanted to call the police as he thought what I was saying on my audio blogs was really happening to me! Oh well, on with the story!

Down there it was PITCH black, the moon was barely there. next to no street lighting, just the glow of the old nuclear power plant that is being decommissioned over the next 150 years that gave me any bearing as to which way was which, oh and the distant noise of the sea.

I parked up, grabbed my camera and Domke bag with a few lenses in. Made sure I had enough cards and batteries and walked off into the darkness towards the ocean. I kid you not I could barely see a bloody thing and of course as this was spontaneous I had no torch. So using my iphone as a light I stumbled upon a knackered old boat on the pebbles. Set up, plugged the remote intervelometer in (the Canon needs this for timelapse, the D300, D700 Nikons have it built in) and then put on my Tokina 11-16mm f2.8mm zoom , set it to 11mm and set the ISO to 3200, the shutter to expose for 30 seconds and the intervelometer to take a photo as soon as the last one was done. I got these settings after taking a few experimental snaps. Really tricky. After all this was my first time and I learnt so much from doing this (apart from bringing a torch). You can see in on of the video blogs at the bottom with the flashing red light just how dark it was down there. Seriously I could barely see the boat with my eyes and I have perfect vision.

The main thing is you need to be REALLY patient. I am not. I am always thinking of the next shot whilst filming, so whilst doing one shot I work out the next one and so on and so forth. NOT WITH TIMELAPSE YOU DON’T!!

Ok, let us do some sums here. Although I am shooting stills on the camera not video I still want it to end up as video so I opted for 24p. That’s 24 frames every second. OK. That means 24 photos per second. 24 photos which take 30 seconds each to do which means each second of video footage would take 12 minutes and you really need to take shots of around 10-15 seconds minimum in my book for timelapses to give you options. The longer the better as you can speed them up, slowing them down isn’t so good! So to get 10 seconds of footage means 120 minutes. 2 hours. For 10 seconds. I got bored. Very quickly. I was cold. I like filming real time best. I was also getting slightly disturbed by the utter darkness apart from the the small red light on the 7d as it exposed a shot. I changed shots WAY short of 2 hours. After all it was gone midnight by this point I was very tired and this was simply an experiment. I did another shot of the same boat with different framing then moved off to the lighthouse. Now the lighthouse shot looks very different as it was so brightly lit that I couldn’t see the sky so well. I had the ISO down to 800 and the exposure set to 10 seconds.

Then I set up outside the late film maker Derek Jarman Prospect Cottage where he lived until he died 17 years ago. Dungeness is one WEIRD place. Windswept. Very bleak, a few houses scattered around with a humongous monolithic power station dwarfing everything. Even the beach is weird, littered with derelict shacks and boats. A superb location.

I sat in the car for this one as I rolled for an hour. Still only got 5 seconds out of it! The police knocked on my window and asked why I was parked up in the car outside Jarman’s house at 315am with the engine running reading Total Film magazine. I explained I had a new camera and I never see the sky like this in London and I was taking some photos and would be gone by 4. He said, yes, it is pretty isn’t it, never really noticed it before. Guess he took it for granted living down there.

So my shots were very short. My first timelapse was almost 2 seconds long. My second almost 3 seconds long. The lighthouse one was 10 seconds long and the Jarman one was 5 seconds long. Not a lot. But hey, this was an experiment to see how to do it, not to make a film. But I tell you what. I want to go back there tonight and do just two shots and go back the night after and the night after that as I loved it. Yes it was bloody boring, and a bit disturbing but it has opened up a whole new technique of film making for me. A slow, painfully slow, tortuously slow one. But the results are worth it. My first attempts are so-so. I can do much better next time now I know what I am doing. It’s just a shame we don’t get skies like that here every night.

Post is really easy. I simply opened up Quicktime Pro 7 (not the awful new Snow Leopard one), imported image sequence, set it to 24p, selected the folder that I had put each sequences jpegs in and hit go. Job’s a good ‘un! I then scaled the video file down to 1080p PRO RES LT and brought it into FCP.

Below is a VERY short edit together of the shots, some of them slowed down in post using twixtor as almost 2 seconds is just not long enough for a shot. I should have waited two hours but it was my first try and I didn’t want to waste the time if it didn’t work. I also graded the colours a bit with Magic Bullet Looks. You can get 20% this plug in by using Bloom2o at checkout.

So here is the short. Below are my two previous films from Dungeness and below that are my slightly odd audio blogs that alleviated my boredom!

Here are the blogs!!