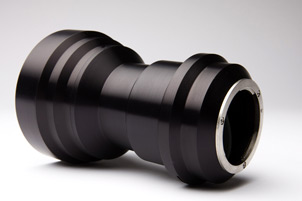 Most people reading this will understand what DOF adaptors are but to understand why this adaptor is so special I will go over the basic concept again…skip ahead if you know this bit, will try and make it as brief as possible…The image of ALL depth of field adaptors is projected onto a screen by a 35mm lens, the screen can be made out of plastic, glass or fiber. This is often referred to as ground glass because the “glass” is very very finely ground to make the glass translucent. If the glass wasn’t translucent the image would just go through the glass and not be projected onto anything. The glass is translucent enough for the camera to then zoom into this image from the other side of the projected image, focused in and recorded and hey presto we have a recorded organic image which true 35mm DOF characteristics.

The problem with ground glass is you can see the finely ground pattern when you zoom in, so to get around this the various adaptor makers went two different ways. First off they used spinning technology, this meant the glass was circular and span round very fast completely hiding the ground glass pattern. These spinners also hid any dust particles on the glass very well and mostly let you use limited high shutter speeds and let you stop down the lens. The spinners out there are the original P&S Technik Mini and Pro 35, The Redrock M2 and Encore, The Letus Ultimate, the SGPro and the new Shoot 35 SGBlade.

The vibrating technology, used by newer versions of P&S Technik, Letus Elite & Extreme and the Cinevate Brevis line used a smaller piece of glass and vibrated it using a motor in various directions to disperse the patterning. Advantages were more compact design, but disadvantages are numerous. Can’t use high speed shutter or stop down generally past f5.6 on 35mm lens or you will see patterning. Also if you get dust on the glass then you will see it.

Movietube and the original Cinemek Guerilla 35 used a static screen. How can a static screen work? Surely you need a motor to disperse the pattern? Well if the screen is finely ground enough you won’t see the pattern. Well that is the idea anyway.

The new Cinemek G35 is a revolutionary device as it uses a magical propriety screen made out of something so amazing you don’t need a motor to hide the patterning. It loses more light than most of the moving adaptors, 1.4 stops in fact, but the image out of it is beautiful. It’s still better light sensitivity than the original Movietube. I have only played with the Movietube jr at NAB last year and wasn’t impressed by the price of the BOKEH.

Let’s take a look at what I like and don’t like about this adaptor and to really test it I used the Sony PMW EX3, along with it’s little brother, it’s a notoriously hard camera to use with an adaptor well due to the lens has, what some term as a unique curvature to it. 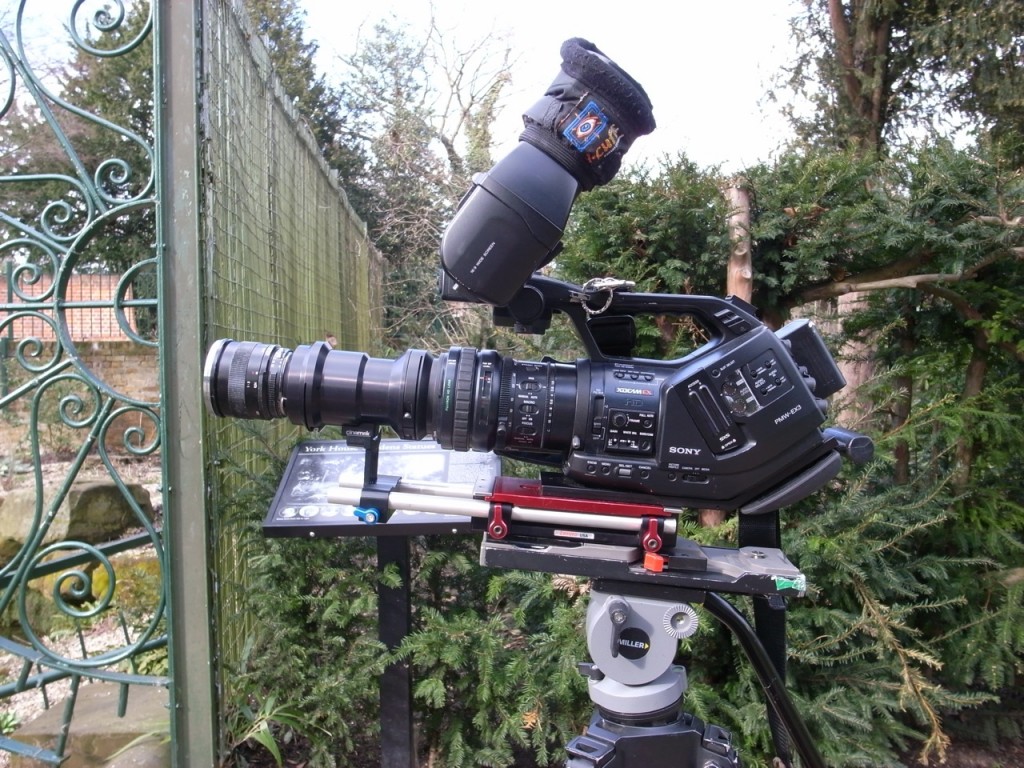 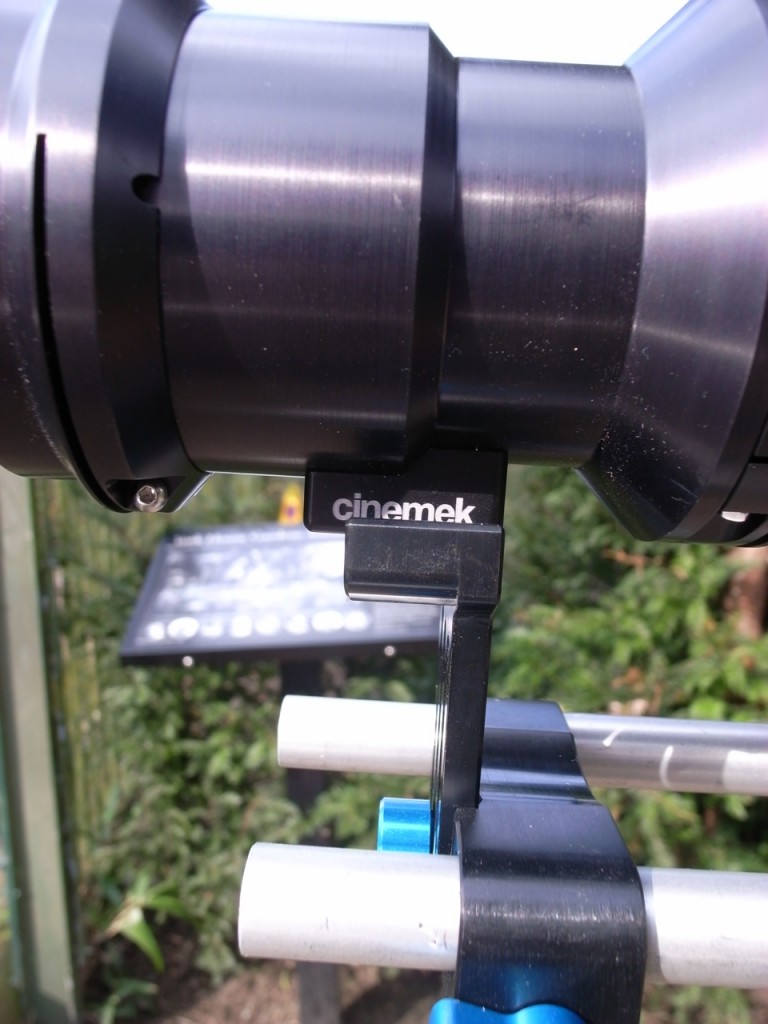 The biggest downside by far for me was the lack of flip. For you people spoilt by all these adaptors with built in flips then you missed the fun early days. The days of magnet tricks, mounting cameras upside down and other such nonsense! Because that annoying thing called physics projects the image upside down onto the glass (all lenses do this, your video lens for your hv20 too, the camera just electronically corrects it so it is right way round) your camera is basically recording an upside down image. This is annoying for two reasons. First off, having an upside down image sucks. You need either a monitor mounted upside down on your rig or a camera that electronically flips this image for you. There aren’t many cameras out there that do this. The only one I know of is the JVC HD200 line. Hopefully the new 700 line will too. So monitoring the image is a pain. If you don’t have a monitor you have to work with an upside down image in your LCD or viewfinder and that really is a head f***! You pan left and the image goes right, you tilt up and the image goes down. It’s HORRIBLE. Then when you get back you have to flop the image in post to correct it, which takes render time.

It has just been pointed out to me that the HPX 171 does have a viewing facility for flipping (but not recording) and the focus ring can be changed into an iris ring so it would be an ideal camera for this adaptor.

Now Cinemek say they will bring out a flip at some point, I hope so as it’s a massive pain in my backside not having a flip! I used it on my EX3 which has a mirror image mode, but this just flips the image vertically, not horizontally so when you tilt up the image goes up but when you pain right the image goes left. You following me?

Now this keeps the price down and the weight down and if you have a good monitor and a powerful computer for post this is no big deal. One of the big arguments against flips in the early days was they were too light hungry. This isn’t the case anymore. Most of them lost a fraction of a stop…

Now due to it being a static screen you also have limitations. Stupidly I totally forgot to test shutter, but I am reliably informed that you can stick in as much as you want which makes sense as it has no moving screen to come into conflict with, now that is cool! Now you have to be careful with the fstop on the 35mm lens or you will see the screen. I found f5.6 was fine for most things, sometimes I would just see a hint of the patterning in bright blue skies. But I also stopped down to f8 and f11 for some test shots and struggled to see the screen so it was fine, in the sky yes, but on other things I couldn’t really see it. But f4 is safest  you will want to stop down to generally to be on the safe side.

The G35 performed WAY better than I expected on the EX3. I expected edge sharpness hell, but for the most part it was good. The other manufactures have been battling with the EX1 ever since it came out to fix this problem with the lens and edge sharpness/ vignetting. As far as I am concerned only one manufacture has this licked, and that is Letus. They have designed a special achromat that corrects the EX1 lens issues giving no Vignetting and perfect edge sharpness. It’s great and I really think the others need to do the same thing ASAP. It’s such a great camera but it does have issues with most DOF adaptors out there. Wide angle lenses did suffer with the G35 as expected, but not as badly as I would have expected.

Generally having a larger space between the achromat and the screen means better edge sharpness, having a flip creates that space. With my EX3 I need to zoom into about Z72 on the Letus Ultimate and SGBlade. With the G35 it’s more like Z55. That doesn’t mean you are getting more image, it’s just the screen is closer. It also means that you have to use the macro on the EX3 to get focus on the screen which is a bit crap as it is so fiddly.

Now to get past this Cinemek are making a range of different bayonet mounts, which is a first, for different cameras so you mount the adaptor onto the lens not with the fiddly and fragile screw threads but by the bayonet of the lens. Much sturdier and as a bonus they have designed it to cover the focus wheel. A great idea! 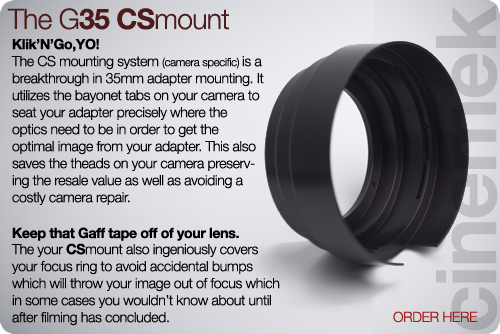 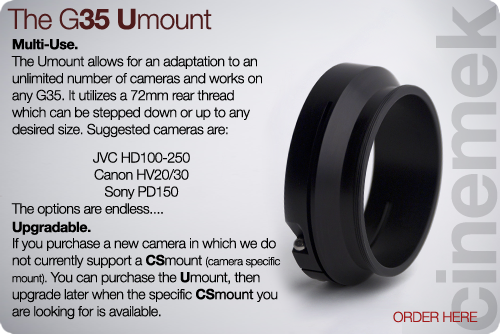 Now screw threads are fine, IF it is the size of your lens ring. The 72mm isn’t the size of the EX3. That is 77mm. So I have to use a step down ring for the camera lens. I hate step rings, they just get stuck on the adaptor or stuck on the lens and are a bitch to take off if this happens. I hope Cinemek bring out an EX Bayonet mount soon for my camera. Will be SO much better!

Now let’s get down to the image…VERY NICE. Very sharp, way sharper than a static screen has any right to be. A beautiful film Bokeh too…I really can’t say much more than that. It’s lovely. Sharp and very organic. Nicely done.

You still need support rods. I used my trusty Zacuto support system with the new Zeddie Wedgie V plate adaptor for the tripod. I also used a Letus lens support as my Zacuto one is married to my Ultimate. if you look at the front of the adaptor where the lens mount is there is an allen bolt so you can loosen that to adjust the back focus for the 35mm lens. When it arrived to me after being tested by some random fellas in Chicago 😉 it was way out on the infinity focus so got that sorted easily. 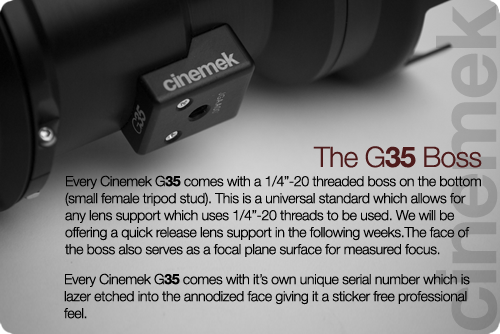 When the support bracket is out I would recommend getting it for the G35.

It’s a really great piece of kit. We really are getting spoilt these days, but what makes this really good is NO MOVING PARTS. Nothing to go wrong. No batteries to charge, no parts to fail. This is a robust as you can get. It’s totally sealed so no dust can get in either. This is a tank of an adaptor. Going somewhere really remote and worried that adaptor may fail out there? This is the one for you! Now it does lose more light than the competition but it makes up for it with lack of moving parts and image, but then loses again because of no flip….so when Cinemek bring out a flip this will be one INCREDIBLE adaptor. So hurry up Cinemek…!

So to sum up. It’s great. Love it. If a flip comes out I will be in heaven, maybe I need to buy an HPX 170…apparently the new HPX 300 will do it too, got one of those on order…until then I will somehow need to rewire my brain so it’s back to front…maybe that’s not a good idea…!

I went out yesterday after a shoot for an hour or so to do some test shots with the G35. You can see the resulting video here.

I am uploading a newer version as had some compression issues at the beginning and end. Should have it corrected soon… 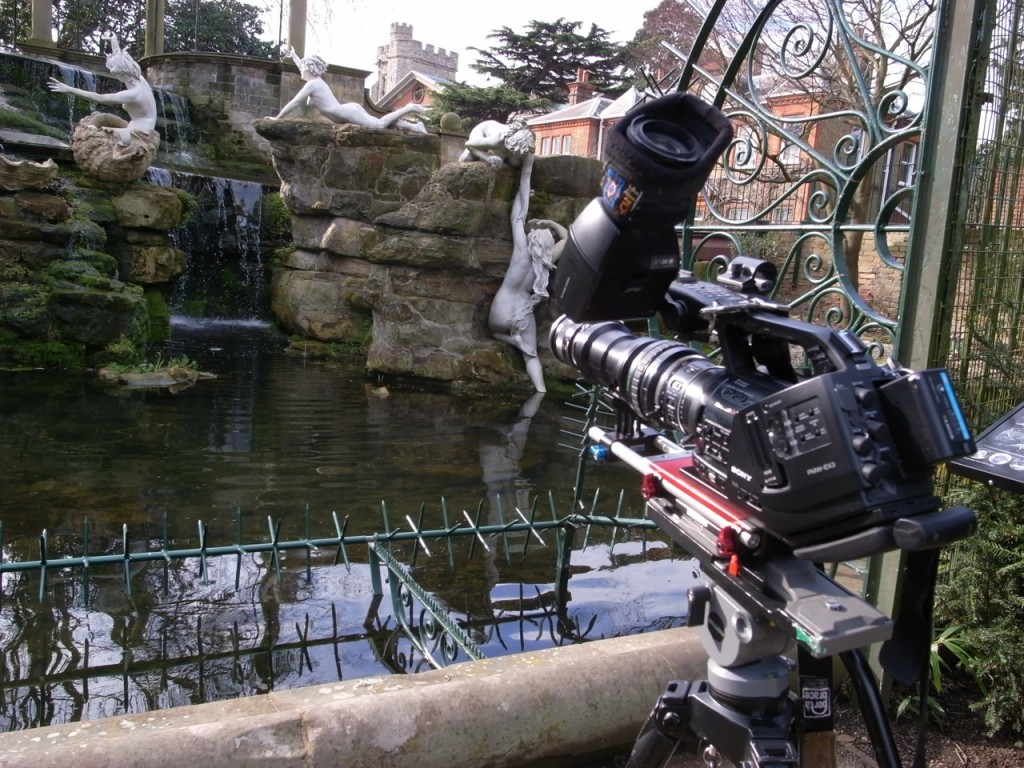 You can purchase the Cinemek G35 from their website http://www.cinemek.com/