Turning “Sofia’s People” into a commercial. EDIT: with more info

DDB- Sofia saw my short film “Sofia’s People” and approached me at the beginning of last week to go back to Sofia and shoot a broadcast 30 second commercial for M-Tel with the same intimate feel as my film, but we pre-cast real people. So keeping it authentic, no actors, just the right mix of people for what they are after.

I of course jumped at the chance to go back as I really enjoyed my time in Sofia. The only daunting thing is I am directing, shooting and editing it and only arriving in the country a day before the shoot. I have not had a hand in casting but the people they have chosen look great! The other scary thing is it needs to be finished and ready to go out on National TV in Bulgaria on Friday night as the time is already booked. So that’s a hell of a turnaround!

Also, I will be taking stills of each couple with the 5d for print campaigns, so a great example of convergence here.

It’s funny how what was essentially me just doing some filming on my way to Dinner has evolved into this. As I always say, keep on plugging away. Keep posting your work and you may get a lucky break.

I will be twittering (follow me @philipbloom) and tumblring (follow me here). Tumblr is a mini blogging site and a great way to integrate and expand upon twitter but not be a full blog like this one…

Here is what I have put on tumblr so far.

All packed and ready to go…

Taking with me for the commercial shoot in Sofia on 5dmkII…

Zacuto tactical shooter as this should all be handheld, this i find essential after using it on cherry blossom girl in Chicago, but i did just drop it on my foot and it hurts.

if I decide i want tripod shots got my Miller DS20. perfect for 5d with a second manfrotto base plate for quick change to tripod and tactical.

Canon vixia hfs10 for behind the scenes filming.

hold luggage comes in at 23kg. 3kg more than their limit but that is the lightest i have ever travelled for a shoot!

No sync on this shoot so no need for any sound equipment.

wish me luck! be twittering and tumblring the whole time 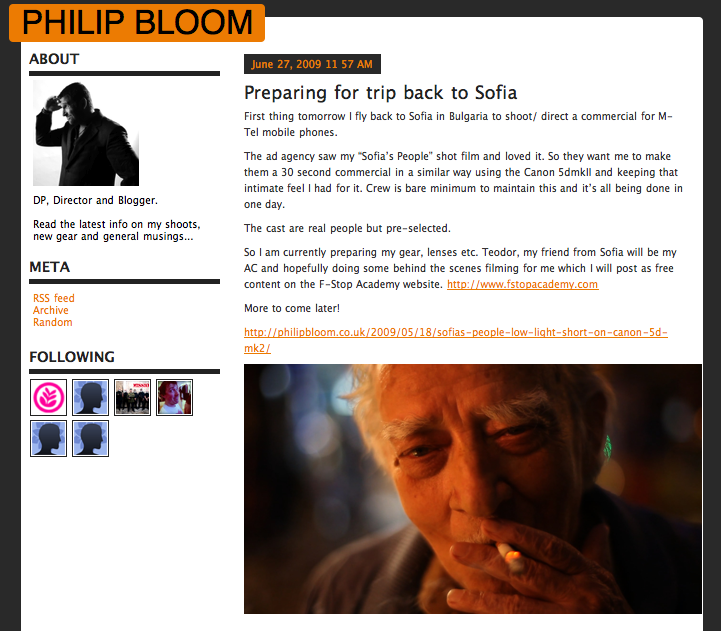