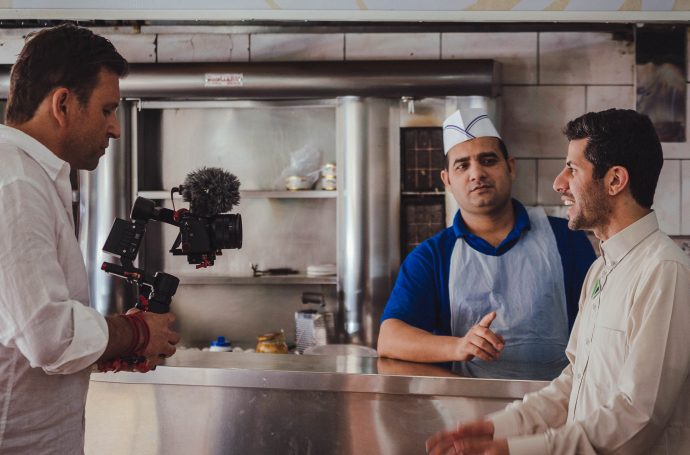 I haven’t made a mini documentary in a long time. The last proper one was over 18 months ago (The Wood Carver). The closest I have done outside of my broadcast documentary work was probably the “vlogumnetary” I made in Tromso on the Northern Lights and Orca Whales. So it is nice to be able to share this one, “The Man From Medina” filmed in Medina, Saudi Arabia in February whilst I was over there to hold some workshops.

The Man From Medina from Philip Bloom on Vimeo.

It was my first time in Saudi Arabia. I have been to other Middle Eastern countries but never Saudi. I am always keen to go to new places. The country is opening up in many ways, and when I was asked if I would go there to teach the young men and women about filmmaking and in particular documentary filmmaking, it felt like a terrific opportunity to go somewhere and make a difference. After all, the film industry in Saudi Arabia is tiny, they don’t even have one cinema in the whole country. Despite that, there is a strong desire in the young Saudis to try and change that.

The second workshop I held was specifically about documentary filmmaking, and after I taught them lots of tools to use to help tell stories, all the students went out the next day to film and edit a 60 second or so mini documentary. I also did the same, to show them on the 3rd day of the workshop. Although mine is most definitely not 60 seconds and was a bit rough due to the time I had to get it finished (well that’s my excuse), I have polished and tweaked it, and that is what you see on this page.

The subject of the film, Rabea Hafiz, actually works for the organisation who brought me over, and when I was looking for a subject for my film, it made total sense. I wanted someone with good English, who was from Medina, who had an interesting life. Sometimes when you are looking for a subject for something like this, you should look close to home! I didn’t want to make a mini documentary about Medina, as that is too big a subject – I wanted Medina to be part of the film, but the film itself to be about a person. For me, that is what connects to the audience the best. There is a lot of negativity in the portrayal of Muslims in the media, and I wanted to show how wrong this is. The people we met in Medina were wonderful, and they are just like you and I. This is what I wanted to get across in my film, to move away from the stereotyping to show something we can all connect to.

Religion is such a hot potato of a subject but one that is very fascinating to me. Personally, I am an atheist, but I do sometimes envy those who have a strong belief of any type of religion in their lives, as it can be quite a beautiful thing. Ten years ago I did a series of mini documentaries for the UK broadcaster Five called “Five faiths’. It took five different families of five different religions and asked them all how they viewed Britain at Christmas. You can check them out here. 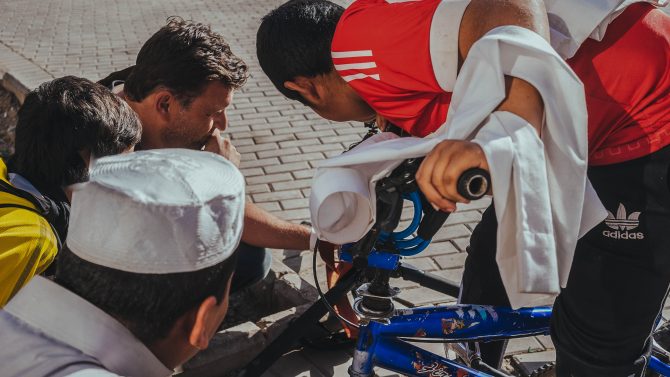 For the actual shoot I used a number of cameras. The main one was the Canon 1DX MK II. One of my favourite cameras for video, as it shoots beautiful 4K up to 60p in almost full frame (1.3x crop like my old favourite but replaced by this, the Canon 1DC) and it also has exceptional autofocus in video. Both of these features I used heavily.

For the interview, I filmed Rabea in his house using available light plus the little Alladin A-Lite Bi Color LED. I wouldn’t normally light an interview with so little, but I had travelled with minimal gear due to the excessive excess baggage charges for the flight over! Still, it worked well, and it looked great!

The Canon 1DX II was used for the interview using the Sigma 85mm ART, and I shot it at F1.4 wide open without manning the camera. The video autofocus of this cameras is so good that I had total confidence in it (Do check out my 3 part video autofocus series which covers many different cameras in many different scenarios). It has facial and object tracking, and in all the times I have used it for interviews it has never once failed me. To be able to film an interview at F1.4 is crazy enough, but to do it unmanned is amazing! You gotta love these innovations. Canon may be somewhat behind on many aspects of camera tech, but the autofocus isn’t one of them! 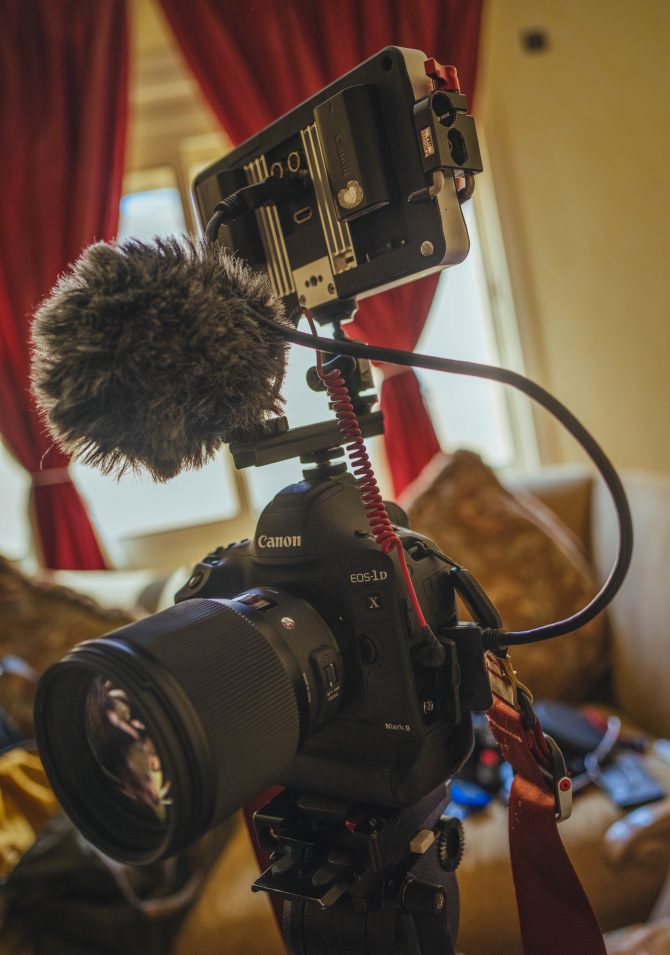 The audio wasn’t brilliant, to be honest. I had my Sony wireless UWP mic with me to connect directly into the hot shoe of a Sony camera, but the only one I had with me for the shoot that afternoon was the A7RII, and for some reason the multi interface shoe on my camera isn’t working (it needs to go in for repair). I was just going to use that camera for audio, as I didn’t have my Zoom H5 or H6 with me, which is what I normally use for dual system sound. So I had to use my Rode Smart Lav + into my iPhone. Normally this sounds good, but there actually was a lot of scratching of the material of Rabea’s shirt, and as the phone was so far from me I was not able to monitor audio as I was doing the interview. Try to never do this, as you must always monitor  audio that you are recording. I had no choice, and when I played the sound back and heard the scratching, my heart sank. The interview was about 45 minutes long, and I didn’t have time to do it again. I knew I could fix it more or less in Adobe Audition, but that is not as good as having it nice and clean in-camera without having to spend ages in post fixing it!

For the B-roll shots of the city, most of them were done with one of my favourite lenses. The Canon 100-400 L II as seen above.

The shots of Rabea with his kids were shot with the Sony A7S II and the Zeiss Batis 18mm. I had that camera with me at night in case I wanted to do some night time shots of Medina. I didn’t in the end, but I still used it for these shots. It was all shot manual focus.

I also used the Sony A6500 a fair bit on the Came TV Optimus as seen above. It’s a great little camera with terrific touch screen tracking autofocus. Not as good as the Canon dual pixel system, but it still works pretty great. I started using the 10-18mm F4 on the gimbal but switched to the 24mm F1.8, which you can see for some stuff in the car. That shallow depth of field and focus holding looked great. It is actually quite hard to see the Sony screen in daylight and to see what is in focus. That is why having a shallower depth of field meant I could actually see clearer what I was focused on. When I had the wide angle, on I couldn’t always tell!

Early on in the edit, you see me walking alongside Rabea. I wasn’t planning to use the gimbal at this point, and it was only decided last minute. That is why it looks a little bit jerky – I didn’t have time to balance it properly. The Optimus is pretty good. One of the better one-armed 3-axis gimbals I have used. Obviously not as good as my Movi M5, but a hell of a lot smaller and more practical for something like this!

All the audio on those shots is from the top mic on the camera, the Rode Video Micro. 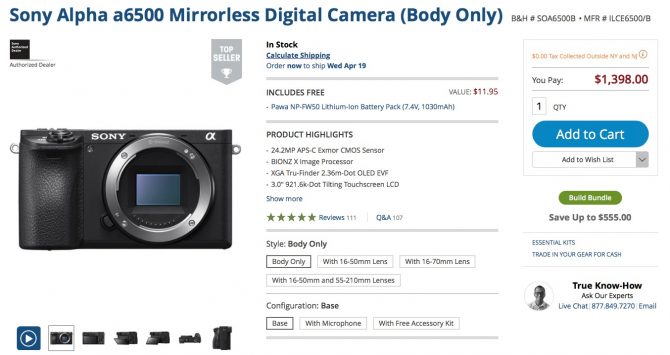 Once again, it was all graded with Film Convert within Premiere. For some reason, I didn’t shoot in Deluts C-log, but I chose the old “Prolost” settings of Natural with Contrast turned all the way off, sharpening down, and saturation down. I didn’t shoot S-Log with the A6500, and I really should have done. I used Cine 4, and it surprisingly held the dynamic range pretty well in the car. The shots of the UK were done in Richmond with the Sony A7SII is S-LOG 3. Having all these different cameras in the edit and not being worried about it is one of the joys of FilmConvert, as it has profiles for all the cameras and settings I used, so matching them was easy! Click the banner below to get $10 off FilmConvert!

Hopefully it won’t be another year and half before I post another mini doc, as I do really enjoy making them. I hope you enjoyed watching this.