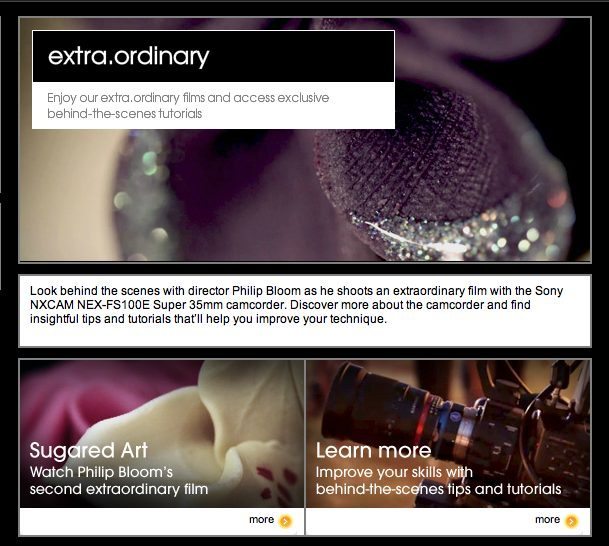 Ethics Statement: I was paid by Sony to make three short pieces with detailed “how to” shoots on how to use the camera. I am not in the permanent  employ of Sony or under contract. I took on this job as it excited me, was a chance to get more experience on the FS100, and was fun!

This is part two of three films I have shot on the FS100 for Sony, as part of their Extra.Ordinary competition to win an FS100. The first film was Evening Waltz and the competition is now closed. The winner will have submitted an idea for something everyday with a unique treatment. They get an FS100 for and I will film the idea for them!

“Sugared-Art” was filmed at the Choccywoccydoodah cake studio in Brighton. We had total control over the kitchen for the day, which was essential. I wanted to follow the progress of making this crazy big decorative cake, but not show the finished product until the very end.

There are two detailed behind the scenes videos on the Sony portal here and here.

I have to say my back had given out the night before the shoot, and I was in agony. Hence I look particularly rough after no sleep, and I was wearing a large back brace to let me continue to work! Ouch! Fine for being behind the camera but not so much for BTS!

HUGE thanks to James Miller and Sarah Estela for their help on the day! Even though all three of us had out backs out!

Gear wise, obviously the FS100 and Zeiss ZF macro lenses 50mm and 100mm. The Zeiss ZF 50mm and 85mm F1.4 too. I widest lens I used was the Samyang 35mm F1.4. So no wide angles in this piece! Lights were the Litepanel 1x1s. One bi-colour and 1 bi-focus. One Dedo 150. One 2k light blasting through the window for the baking shots. The monitor was my trust TV Logic 5.6″. An MTF services adaptor was used to use Nikon mount lenses on the FS100

Initially it was going to be shot on the F3 as it’s my best camera, but as the competition was to win an FS100 it made sense to keep using that camera for all three…and to be honest I was really impressed with the camera on this shoot. The most impressed I have been on anything I have shot with the FS100. The image was rich and very detailed and held up astonishing well in grading with Magic Bullet Colorista II and a touch of Looks 2 (both available for 20% off at checkout with code bloom20!) despite being all internal recording at 24mb/s. I know I was paid to make these by Sony, but my opinion is still my own and hand on heart I was damn impressed!