HUGE thanks to Queensbury Media for letting me blog about this shoot and do an edit for myself. Lovely when you can do that!

Yep I took the plunge! I bought a RED Epic a couple of months or so back after falling in love with it after shooting with Eric Kessler’s one for a mini doc piece called “Great Wooden Boats”. It was a big decision. This was not buying a GH2 or a new Canon DSLR. This was a lot of money. $58k for the package. To invest this much in one camera I had to make sure I would get the work that would justify it. Fortunately I did so I took the plunge!

The package includes the M brain, the bomb EVF, touch screen LCD, 4 RED Volts batteries and charger, SSD module, 4 SSDs, side grip and REDmote. On top of that you need to spend a fair bit of cash on other bits to make it work for YOU…powering from the RED Volts (which I have only just got) is not ideal as they don’t last long at all. So really you need “proper” batteries. I have some IDX Elite batteries. Expensive but last forever. They work across all my large “pro” cameras and any I hire like the Alexa etc…

Next up you need some more mounting points for bits to the camera. I just received my “full metal jacket”  from Viewfactor. It replaces the top plate of the camera giving a really nice fancy cheese plate. I also got a top handle and an EVF mount from Wooden Cameras. 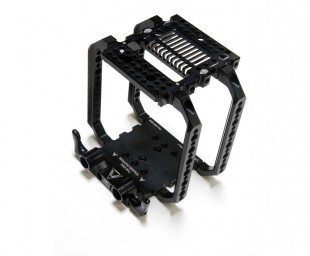 Having these extra bits makes the shooting experience on the Epic a lot better. You don’t need that much but all these accessories add up…and that’s before you turn it into a handheld rig.

Anyway…enough about the bits, let’s talk about the shoot. I was asked by Queensbury Media to do the idents for their Ultimate Strongman show which airs at the end of the year. Originally is was suggested as a 5DmkII shoot then I suggested the F3 for it’s superior quality then once we talked about what we wanted I suggested my brand new just received RED Epic. Thing is, this is an SD production…so is a 5K camera overkill for this? No. What we wanted was lots of stylised slow motion shots and the F3 can only do 60 FPS. Whereas the Epic can do up to 120 FPS in 5K and when you drop down to 2K you can push it to 300 FPS.

One small sticking point is they couldn’t take the RED’sR3D files so I would have to deliver them the files converted to ProRes. I have a RED Rocket card on it’s way to me, and that does real time transcoding. Without it my computer takes about 15 times slower than real time to convert. not ideal…but do-able.

The shoot was in Belfast in Northern Ireland, literally just around the corner from where Game Of Thrones was being shot on the Arri Alexa…oh one quick thing, I have been asked why did I get an EPIC and not an Alexa. I LOVE the image from the Alexa and 1080p is great for almost all jobs, but it’s big and very heavy and not ideal for the type of work I do. Beautiful image though. The EPIC is also more future proofed with it’s 5K resolution and promised sensor upgrade in the future. 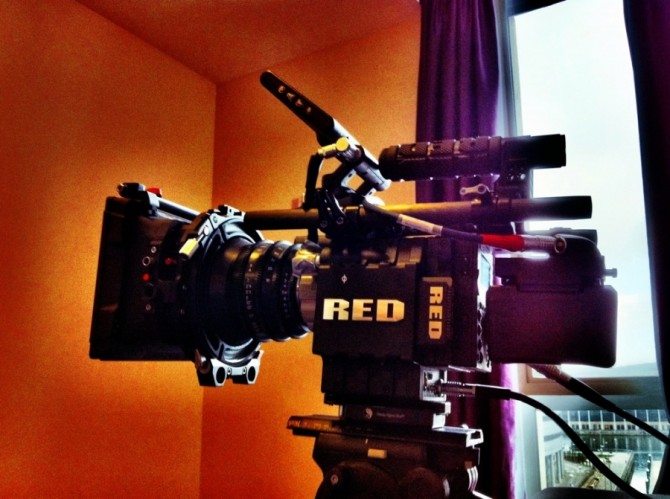 The gear that I had with me for the shoot. My favourite matte box. The O’Connor OBOX  (I used it in clip on style, much more preferable and faster for me) with 4×4 variable ND filters from LightCraft workshops, 4×4 fixed NDs and some grads. The batteries as listed above. My Miller Solo Compass 20 sticks and head (a bit lightweight for this cameras really. I need the Compass 25). I didn’t have a follow focus as I hadn’t figure out a plate, rods setup at that point. The full metal jacket fixes that for me.

I did a number of Belfast beauty shots for their opening sequence and of the area around the iconic Harland and Wolff docks, right by where the Titanic was built. 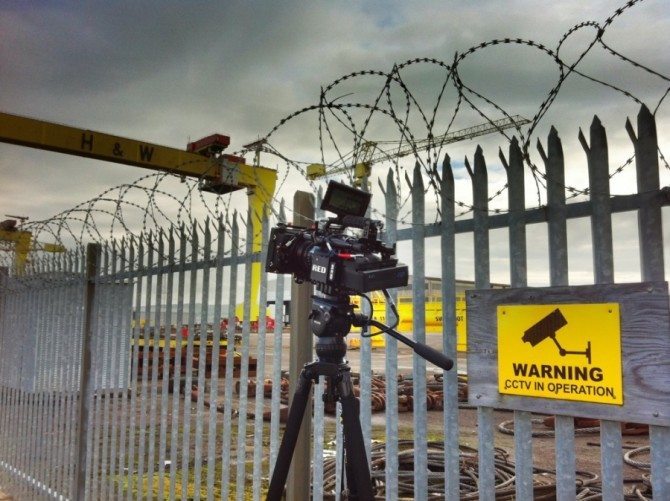 Shooting RAW is a whole different experience. The ISO and white balance make zero difference to what is recorded in so far as they are for display purposes. When shooting RAW you don’t shoot at a set ISO, it’s all metadata. But what the ISO does is affect how much shutter speed, iris and ND you use to create your look. In the RED Cine Pro X software you then can bring up or bring down the ISO, change the white balance and so much more. But you still need to get the look right in the camera whilst shooting.

The EPIC sensor is bigger than the RED ONE MX sensor, smaller than the 5DmkII of course but a nice size. The camera is a massive step up from the RED ONE, even the MX. Both in operation and size as well as the actual image. I never took to the RED One but one shoot with the Epic and I was sold.

5k is a lot of resolution. You can shoot up to 96FPS using the whole sensor. Crop down to 2.4 to 1 and you can push it to 120FPS which most of the “portrait shots” where shot at. To go above 120 FPS you need to drop the resolution to 2k. Unfortunately it means you lose the whole look and feel of the Super 35mm sensor and end up with something more akin to 16mm as it simply samples the centre of the sensor to get the 2K.

One thing I noticed about the 2K is the detail and the noise is nowhere near as incredible as the 5K or 4K image. There seems to be a lot more noise in it. I am told it will be improved with firmware. Talking of that there are a lot of features not working on the camera yet including HDMI out and more crucially playback. It’s coming but we don’t have it yet. 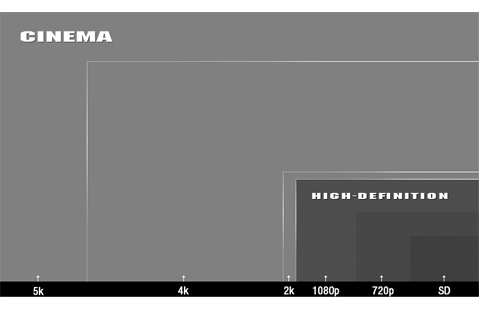 As well as the idents I shot a fair bit of footage of the event, focusing on detail especially the faces of the guys. Of course without a long lens that was tougher. But that is where the 2K crop came in handy giving me an equivalent focal length on the EPIC of around 210mm or so.

All the footage was looking great. I was very happy with it. Then on day two it all went wrong…the camera would not turn on. The power button light turned yellow for half a second and then went back to red. I tweeted out for help, scoured the internet, emailed RED. I then raced back to the hotel to plug it into the AC and still nothing. I then followed advice of stripping the camera down to nothing and still nothing. I was made aware of a thread on REDuser.net that told of a firmware glitch that had been fixed on a new release that morning. If you set your camera to certain parameters it would lock up. Basically I realised I was stuffed. The camera would have to go back to RED Europe to be re-flashed and I had already lost 3 hours of the shoot time. I decided to bite the bullet and try and finish off the shoot with my backup camera, which was never intended as a backup camera, my 5DmkII. As all my shots were extreme slow motion this was not good but I had no choice.

In the end I was able to get a few nice pretties with camera but I dissapointed. I missed some great moments and it was pretty embarrassing for me, to have to tell my client the camera had died. But thankfully he was fantastically understanding and happy with what we had. 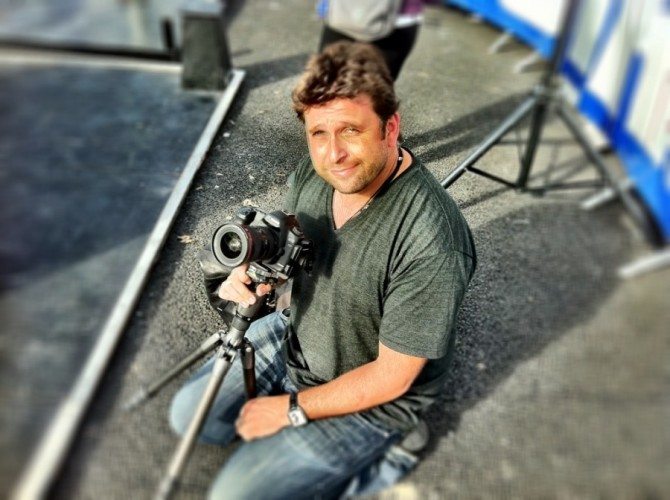 I offloaded everything in my hotel room at the Premiere Inn (which was actually not too bad!) I offloaded to 3 Western Digital 1tb drives. Not G-Tech Raids as my luggage allowance on BMI was bloody TINY. I hardly took anything with me and still my excess was £350 each way. I used the brilliant Shotput Pro to offload. I cannot recommend this enough as it error checks for you. 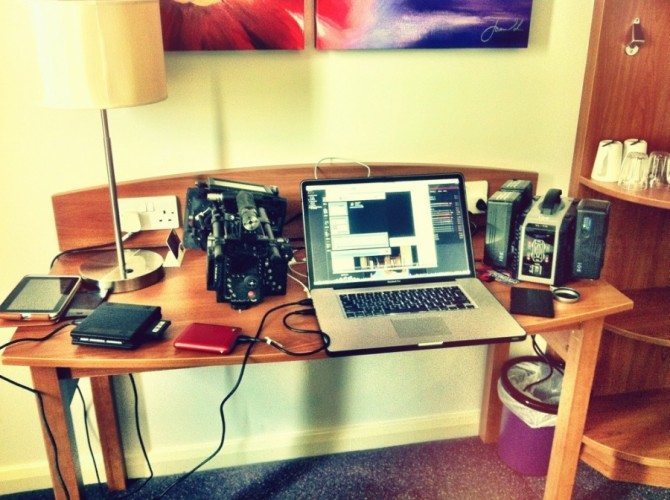 When I got back I used The Foundry’s Storm to do a light grade and touch up the images and then to export to ProRes 422 for the client. It took 4 days to convert it!! 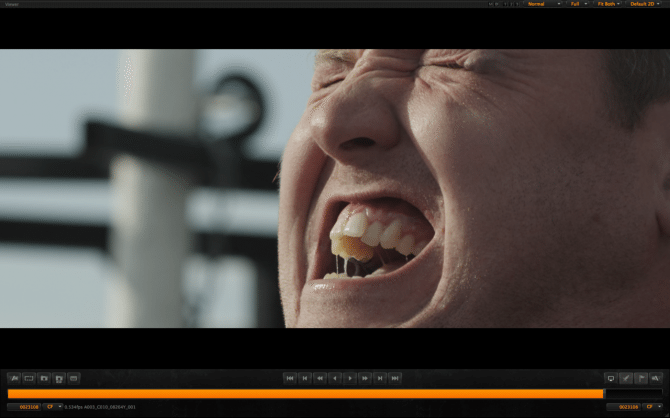 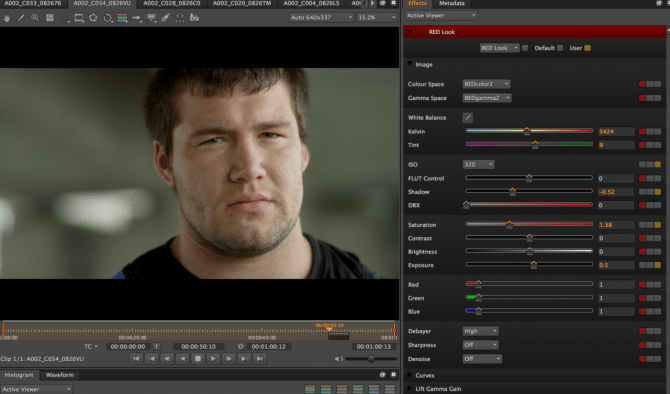 Queensbury asked me if I wanted to do a personal edit of the footage like I did of their cliff diving event I shot which became my “3 Seconds” piece and of course said yes please (that is at the bottom of this post). So that is what you can see below. I actually just did this edit in the last 90 minutes of my flight over to Chicago yesterday using my 17″ MBP and Final Cut 7. I am using Premiere Pro more and more but am still way faster with FCP.

I graded with Magic Bullet Looks 2. I have a discount code for 20% off for any Magic Bullet product at redgiantsoftware.com “bloom20”.

The light was very grey on the first day so I wanted to add some warmth and texture to it. Day two was better weather but unfortunately that was the day the camera died. I thought about going black and white briefly but the red faces near the end meant that was a dumb idea!

The choice of the grade won’t be to everyone’s taste. I like to go for different looks and feels for my piece. This worked for me. A lot of tweaking was done to achieve this look.

This is the edit below. I am pretty happy with it. It very much feels like one of my old style pieces that I have not done for a while. Lots of interesting faces. I love interesting faces! I adore the portraits and of course the end shot, there is so much footage I didn’t use that looks as EPIC. But I really love the strained faces on the double axe holding part that is near the end. The pain is immense in their faces. It looks like they are having the world’s biggest dump or the worlds’ best…let me leave it there… 🙂

So all in all. I loved shooting with the Epic. I am away currently doing a shoot with the Epic and F3. Yes the firmware issue scared the CRAP out of me but it has behaved since them. It was a glitch. A one off I hope. It was worth it in the end!

Here is 3 Seconds! Shot on the EX3 and Letus Ultimate adaptor.

and here is the incredible opening titles from “The Fall”