So I have the Sony F3 over Christmas with both the 50mm and 85m T2 primes that form 2/3rds of the F3K kit, there was no 35mm unfortunately. It’s cold outside so doing a pretty landscape thingamajig was out of the questions also my sister has gotten jealous with the attention my mum got for the cute cooking video I did with her and the GH2 (which is going to be on the big screen at the Panasonic stand at CES in Vegas!). So I decided to make a little film of her.

I tend to prefer to film interesting looking people rather than obviously beautifully people like my sister Nathalie but I made an exception for her. She’s my older sister and very lovely and it was time I exposed you lot to her, I have been trying to protect her. She modelled for many years in the 80s/90s and was very successful but stopped when she had her two kids, my lovely niece and nephew, Jaime and Dan.

She has been a wonderful host this Christmas, we are not religious but this is a time to be with family for us, especially with the little ones. So it was Nat, her kids, my Mum and Dad and it has been lovely having family time with the just 6 of us. The closest of my family left. So this is a little gift to her, also a great subject for my little film. She adores Michael Buble hence the choice of music and John Lennon, hence the cameo. I took loads of photos with my Leica M9 on Christmas day  (check me out on flickr for those photos, link at footer of blog) and just got the video camera out for today. They are VERY used to me and cameras!

The lack of anything resembling a wide lens was a pain, the 50mm with the S35 crop means I was getting more of an 72mm field of view from it when compared to a full frame camera, check out my latest lens blog for more on this. I shot it at 1080p HQ mode at 24p overcranked to 30p to give it a slightly slower more graceful look and everything was filmed in reverse to add to the slightly different kind of etherereal feel to it. So she basically took all the decorations off! Which made my directions and camera moves hurt my head a little. But she had the patience of a saint and did everything spot on for me.

No additional lighting was used. All practicals.

Everything was graded with Magic Bullet Looks, using a film stock preset tweaked as I really wanted this to feel as damn Christmassy and warm as possible!! You can see a split screen version below which shows out of camera picture one side and graded the other. You can get 20% off at the checkout of redgiantsoftware.com with code bloom20, and the damn dead pixel I have on the pre-production camera was removed using Digital Heaven’s Reincarnation 2.0. A very fast plug in and worked perfectly (the first version uploaded was pre fixing, new version which is uploading is perfect) It’s a bloody most buy for anyone shooting digitally these days and so cheap! Don’t bother judging latitude from this as it is graded! 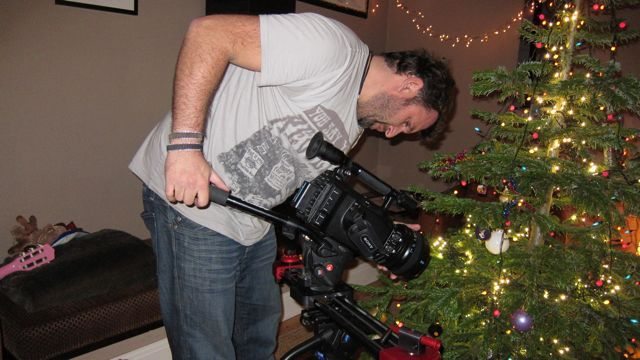 The kit lenses are ok, not as silky smooth as I would like, not enough focus rotation and nowhere near enough focus marks for accurate focus pulling like the Zeiss Cp.2s have. They have a lovely image though, and are nice and solid with no apparent breathing that I could see. If given the choice, just from these pre-production lenses I would go with the Zeiss Cp.2 instead, they are smoother and the markers are more precise. CVP in the UK are doing an F3 kit with CP.2 lenses but it will cost you £1800 more than the F3K kit…but getting a set of CP.2 is a great idea as their are awesome lenses of great value.

In fact the whole camera feels really solid, much much more so than the EX1. This feels like a really meaty professional camera and if feels reassuringly expensive. Yes, it is expensive. Almost £13,000 body only for us in the UK, we always pay more. The Ex1 for comparison is £5,500 and the nearest camera to it in the marketplace feature wise and sensor size wise is the WAY cheaper Panasonic AF101 at just £4000. This feels like more of a pro camera for sure. Feels better built, comes with a PL mount, takes a better recording medium with SxS and a better recording format in XDCAM EX. But it’s only 4:2:0, only 35mb/s and can only overcrank to 30p in full HD mode for 60fps it’s 720p only (the AF101 can do full HD 60fps overcrank). Like the EX1. In fact it feels like an upgraded EX1 with a MUCH better chip in it, a native Super 35mm CMOS sensor. It is capable of dual link 4:4:4 out to HDCAM SR for incredible quality and 4:2:2 with something like a Nanoflash. It’s just a shame at the price point there is not native 50mb/s or 4:2:2.

I have two more days with the camera where I hope to learn more about it. Do I want one? Abso-bloody-lutely. It’s a dream to shoot with, the image IS better than the Panny in my personal opinion but it’s SO much more money. Can I justify that sort of expensive? Not really right now after buying the Panny…I wish I had the spare cash for it…

The little piece I did with my sister could EASILY have been done with any of my Canon DSLRs or GH2, there was nothing that challenged the camera in any way except the low light. Everything was shot with practical lights, no additional lighting. I shot at 1/50th of a second despite doing 30fps as there would have been flicker from the practicals at 1/60th of second as it’s 50hz in this country. All the shots were at 12db and 18db gain with cine gamma 4 and detail off.

I used the rather excellent new Vinten Vision Blue tripod with my rather excellent Kessler Crane Philip Bloom Signature Series dolly on top of it. Normally I would not mount it on a head but the Vinten plate is rock solid and could take it. The F3 with the prime is not light, and it was great to see my pocket dolly not struggle in the slightest. It really can take quite heavy cameras!

The blue really is a tripod worth looking at. Classic Vinten quality. Solid smooth head with perfect balance feature and really pretty affordable for a tripod in this class. It works with DSLRs through to this sort of camera. I don’t recommend floor spreaders like I had, get the centre spreader. 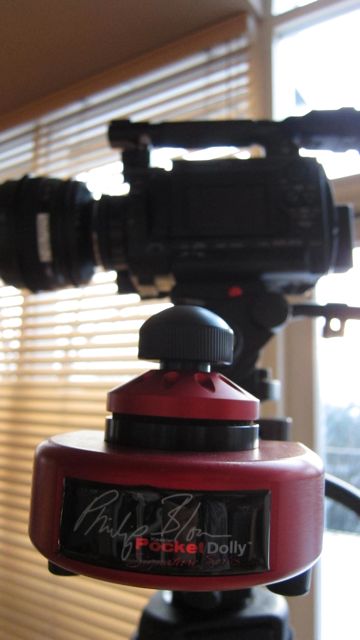 I will be doing an on camera review of the F3 before I hand it back. I doubt I will get a chance to really push it as I simply don’t have it long enough. But I have had it long enough to know that if it was sub £10k I would be ordering it today. Potentially this is a stupendous camera BUT it needs an external recorder to realise it’s potential and that costs more money. Damn shame as it’s such a f****** gorgeous image. I have already bought an AF101 and have it so it’s makes buying an F3 so much of a harder decision. I have an EX3 still and loads of SxS cards and batteries so I am already partly invested in the system. Luckily I as I was given no charger and no media!

The form factor of course sucks as I have said before, so does the Panny. Shoulder mount is the only form factor that really works. Being based on an EX3 would have been better but not perfect. The EVF too is not great…

Anyway that’s my initial thoughts for now, I will be doing a full video review this week. In the meantime enjoy easily the most festive short I have made and my lovely sister. Just hands off alright!!!?

Stardust Nathalie: Half grade from Philip Bloom extras on Vimeo.