A quick look at the Sony NEX5N. The good and the annoying EDIT: NOW FIXED

I love cameras. You may realise that. They are my equivalent of handbags (actually I had quite a few man bags too!) I don’t care which company makes them. I have, at the last count about 50 or so cameras in my collection. Out of those, many are just part of my collection, old Super 8mm cameras, old Video 8 cameras, old film 35mm cameras and of course a fair few DSRLs, full size camcorders both HD and SD, mid size HD camcorders like EX1, JVC 201 (no idea why I still have that!), Z1 and then new S35 cameras like the F3 and FS100. Obviously the king of my collection is my RED Epic.

The ones I use constantly for paid work are the Canon DSLRs, F3, FS100 and RED Epic with a little bit of GH2. I am not a camera snob, and just because I own an Epic does not mean that is all I shoot with. That would be daft. Always the right camera for the right job. Often that is a DSLR…

I also, like many, never leave home without a proper camera. Be it my trusty Canon S95 or more recently this new camera that I have just got. The Sony NEX5N. 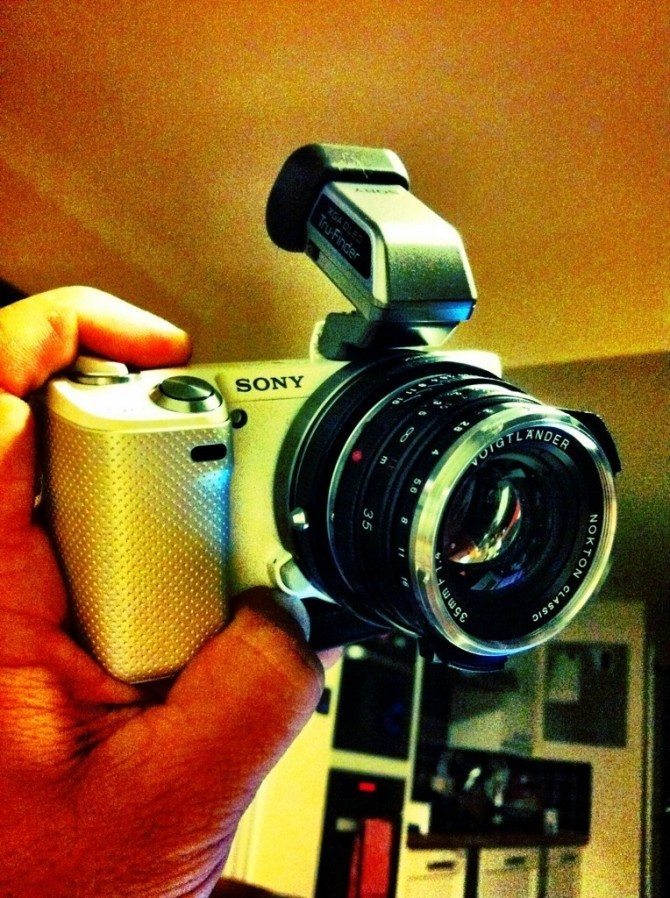 Now, I have an NEX5 and to be honest it simply never grabbed me for various reasons.

The updated version is the NEX5N and it’s much better than the previous one. Key features for me are an improved chip and light sensitivity and this..1080p 25p/50p for Europe and 24p/30p/60p for the USA. Full HD slow motion for a tiny APS-C camera is a big deal for me.

It takes nice pictures too and has a crazy amount of features. It’s a bit fiddly as there are not many buttons on it, but that is a compromise that has to happen due to the tiny size.

One feature that is not standard but is a must-buy accessory is the OLED EVF. It has 2.4 million dots and is simply the clearest, sharpest viewfinder I have ever seen, and it has red peaking! It pivots too which is nice. What is not so nice is it will set you back up to $400 which makes the NEX5-N much pricier. The NEX-7 which comes out at the end of the year has a non pivoting version of this EVF but has the same chip in it as the A77. More pixels generally means less light sensitivity when it comes to sensors. Of course until I have shot with either the A77 or NEX-7 I won’t know. All I know is that the NEX-5N in video (limited to 3200 ISO) is pretty damn good, as you can see from the little review video I did of Sachtler Ace tripod below. All shot at 3200 ISO and lit by a computer screen in a VERY dark room using an old Nikon 50mm F1.2 and a Samyang 35mm F1.4. The noise is actually quite grain-like which is nice (although MP4 compression as always cleans it up enormously, as does the compression by Vimeo!)

Did I mention how amazing the OLED viewfinder is? Seriously. If you get a chance to look through it…do it!

What is not so nice is that all of the NEX5Ns seem to make this clicking noise, actually it’s almost like a ticking when you move the camera around as demonstrated by the video below. It’s very odd. I have tried two bodies and they all do it, whether the camera is on or off, whether the lens is on or off..it makes no difference. It’s actually not that audible to the human ear unless you put you ear to it, but as the rather poor microphone of the NEX5N is quite close to wherever that ticking is coming from, it’s clearly audible in recordings in quiet places. What it is?  Sony have confirmed it exists but that is all.

EDIT: This has now been confirmed as a fault and will be fixed on all existing camera. It means sending them in though! Hopefully no new ones will have this!

It’s actually amazing that it was shipped as is. Because everyone is reporting the issue. I have not heard of anyone who does not have it. Although I did not notice it immediately, that is mainly because my old joins creak, crack and click so much I can’t hear much over that noise! 🙂 Hopefully this won’t put me  in Sony’s bad books for saying this. I still hope to get a Sony NEX7 and A77 to test ASAP. I bought the NEX5N as I really wanted it and there was no sign of a test body…

Using an external microphone would get past the clicking. Problem is, the only place to mount it is the electronic mount on the top of the camera…which is of course taken by the EVF! There is no mic input on the camera and no hot shoe anyway to mount it if there was!

So it’s a bit of dilemma. The camera is excellent. Yes, rolling shutter is bad as expected. Moire and aliasing visible but not as bad as many, and the image is lovely as it the low light, and it’s so damn small!

Lens wise it uses the e-mount. The same as the FS100. Currently I really don’t like the lenses made for this mount. But that will change. A camera this small needs some nice compact lenses and the only one is the F2.8 16mm, which is too wide for standard lens use.

I have a Nikon adaptor and a Leica M adaptor. Hell I even have a PL adaptor but that is ridiculous! The Leica M adaptor works well with my Voigtlander 35mm F1.4 pancake lens. No auto functions though which are rather good on this camera. 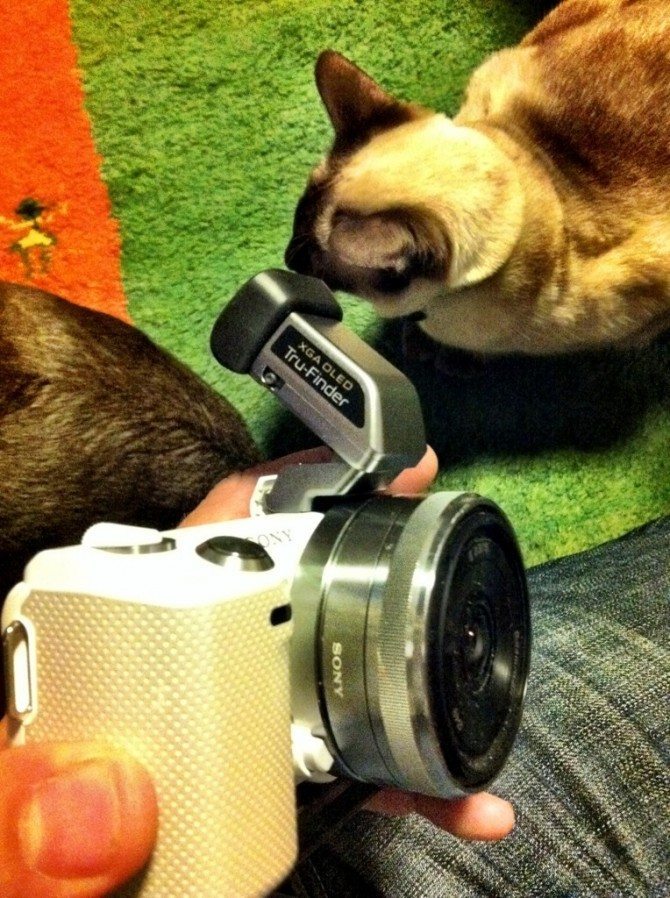 So all in all. A lovely little camera with a rather annoying issue. I hope this can be fixed…not sure how though, as this is a hardware issue not a firmware issue…will they all need to be sent back?

One more thing, some people have reported the camera overheating and not being able to get to the 29 mins 59 seconds max per clip. I just did…at 25p with no issue. 50p…no issue.

Also without the viewfinder the camera is only half as good for me…it does output a full HD hdmi signal but mounting a Zacuto EVF on this baby would be daft, especially as the OLED EVF is stunning! 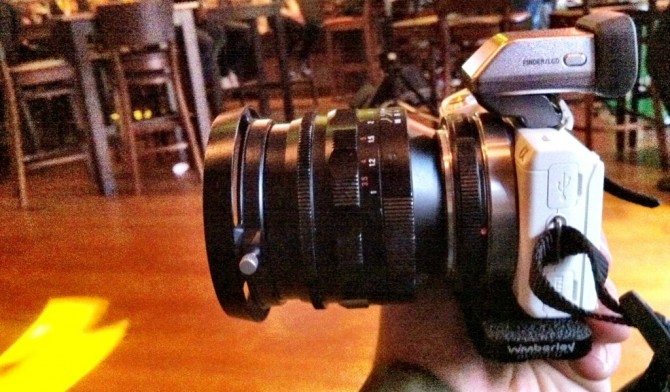 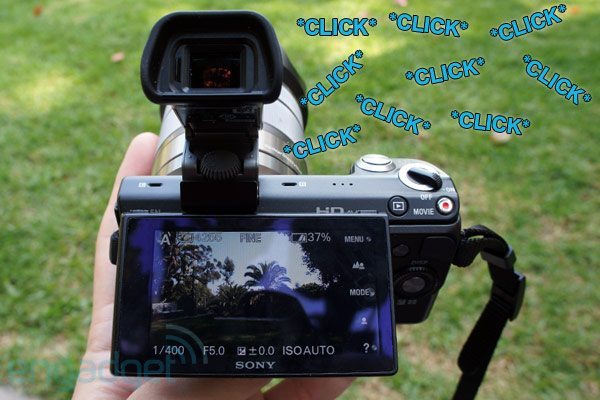