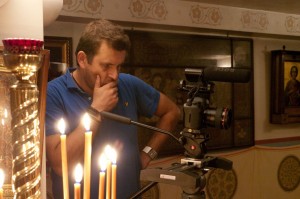 This week I did another Canon 5dMkII shoot. It was for a client of mine , Russian Hour , whom I went to Siberia with three times last year. You can see a couple of the shorts I shot out there here and here. It was to film famous Russian actor Boris Burlyaev read the poems of Dmitry Mizgulin. The location was Chiswick, West London, at the Russian Orthodox Church.

Originally it was going to be an EX3/ Relay/ Letus Ultimate Shoot but the plan was to use lots of candlelight so that meant that it was not going to work. That’s a pretty good low light combination, adaptor wise, but not sensitive enough for what I needed. So it was the 5dmkII again with it’s astonishing low light capabilities. Down side was recording sound separately and having to convert to 25p in post. But there was little movement, all on tripod with dolly shots so the rolling shutter issues of the 5d would not cause a problem. As long as you are aware of the camera’s limitations you can get great stuff from it. 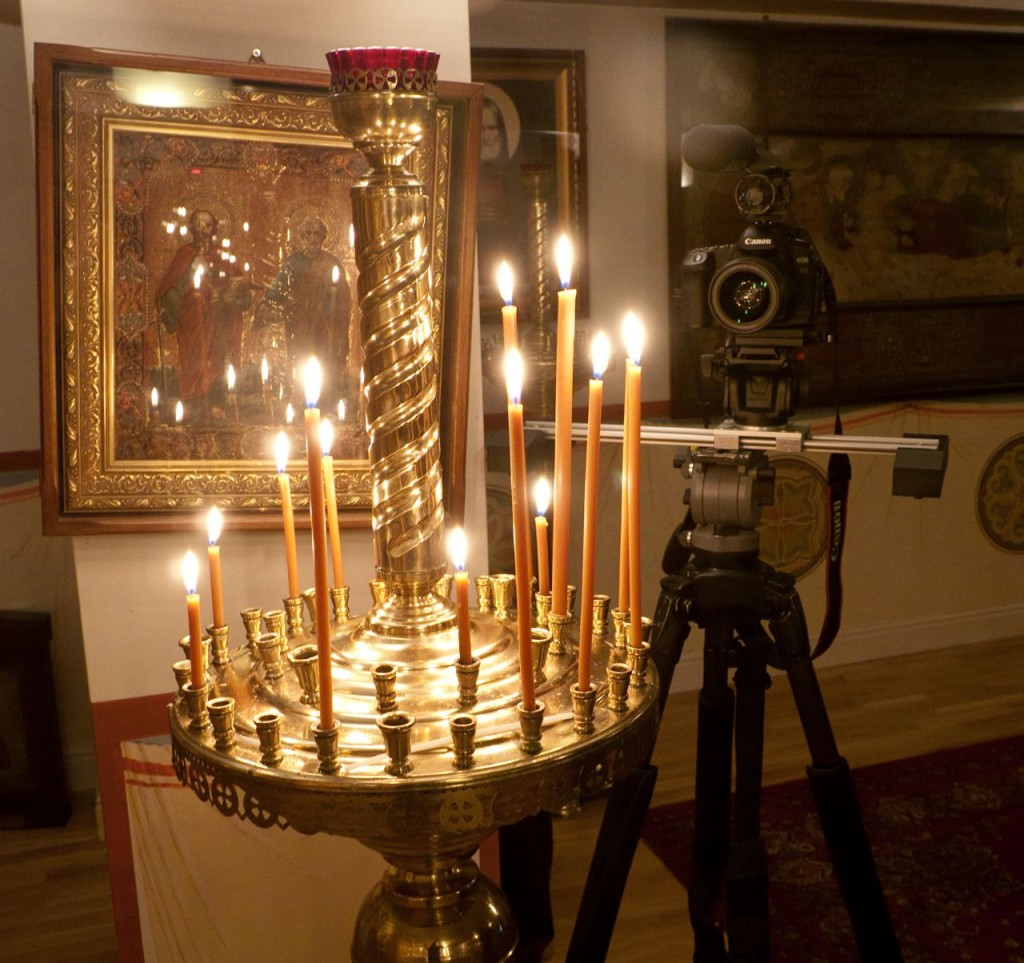 I also brought with me two new toys to try out with the 5d.

First off was the Glidetrack compact (turn your sound down when clicking on that link!), a great little device that gave me a really simple way of getting a simple dolly move without having to set up my whole dolly and track. It just went on top of my miller head and I fixed a manfrotto head from my monopod onto the top. I used it the first reading in the video below and in about 6 different shots in the finished film. It looks great, works really well and is incredibly light. 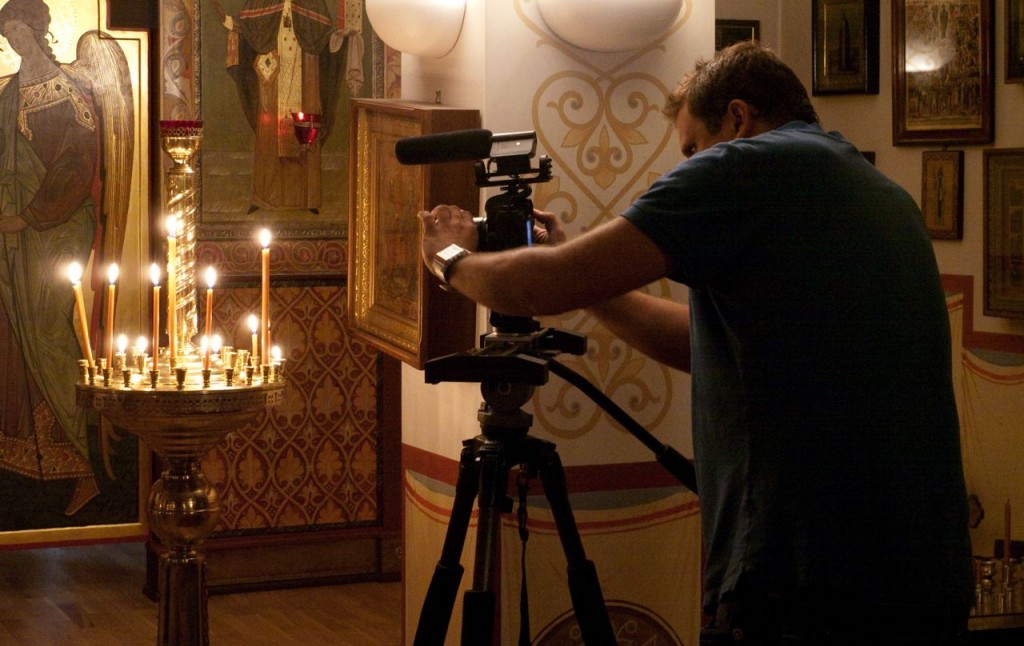 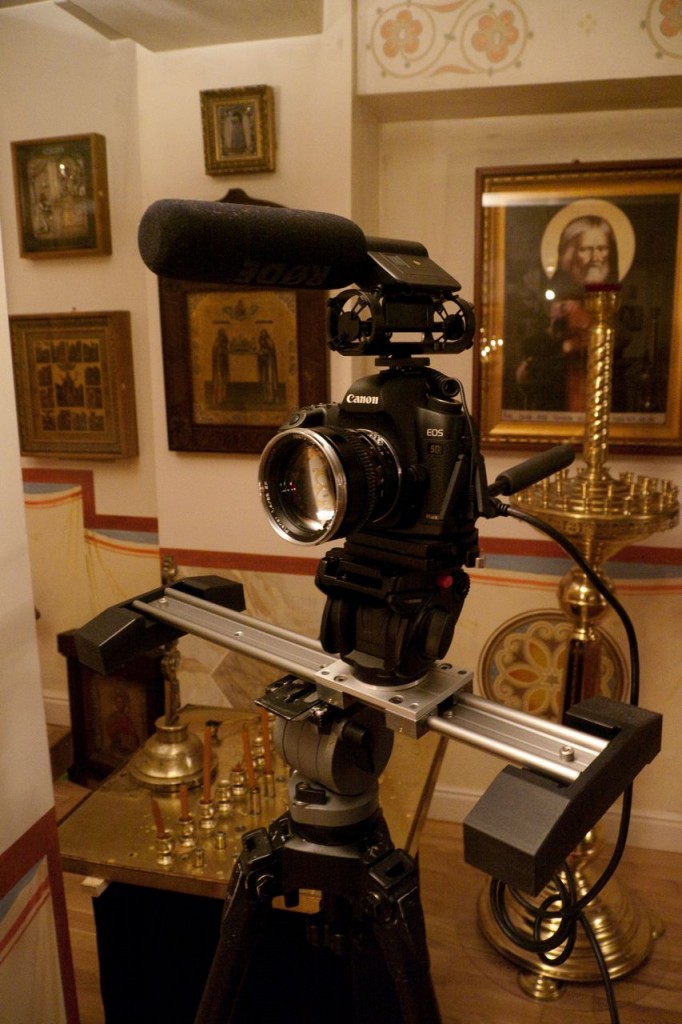 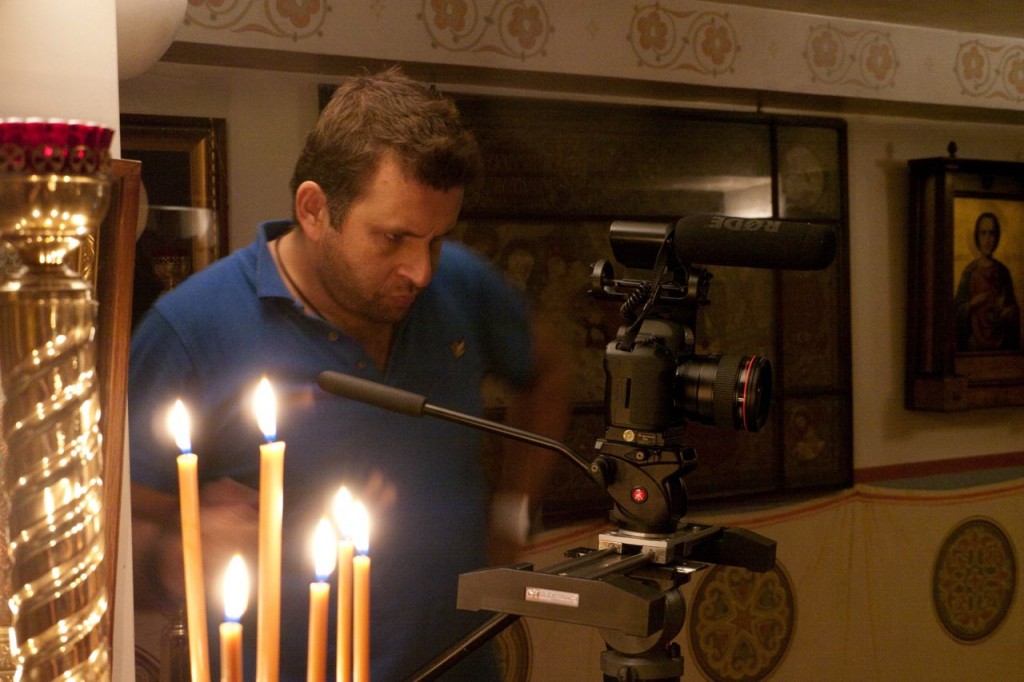 When I decided to go down the 5d route I asked for a proper sound recordist. Yes at a push I could do it myself as it’s just one speaker but this film was all about the beauty of Dmitry’s words so the sound needed to be incredible. So I got Alan Hill, a veteran of many drama and documentaries to record sound for me. He was brilliant. Everything sounded amazing in the end and he really had top of the line gear . He used one DPA 406 personal microphone on the actor and a 416 and a MKH30 mixed over the top to get a stereo atmosphere. The mixer was a sound devices 442 and the recorder a 744t. He recorded onto one of my CF cards and also onto the built in hard drive as a back up. I used a Rode VideoMic directional mic for the 5d or Gh1. I wanted good clean in camera audio for sync. It’s a good mic for general 5d atmos, but I also really like the power switch and light in my eye-line so I know it is working, especially with the terrible sound limitations with the Canon of knowing if any sound is being recorded.

The crew was very small. I acted as DP and Director, Alan did Sound, Alexander Korobko was the producer and Edward McLeod-Jones ,whom I had never met, was my assistant. He responded to my twitter call for an assistant and he was superb. He acted as my AC and BTS photographer using a Lumix GH1. We used a good old fashioned clapperboard for sync and of course everything was labelled on the clapper with the correct scene and take which Alan labelled his files as to, which makes syncing them a breeze in post. 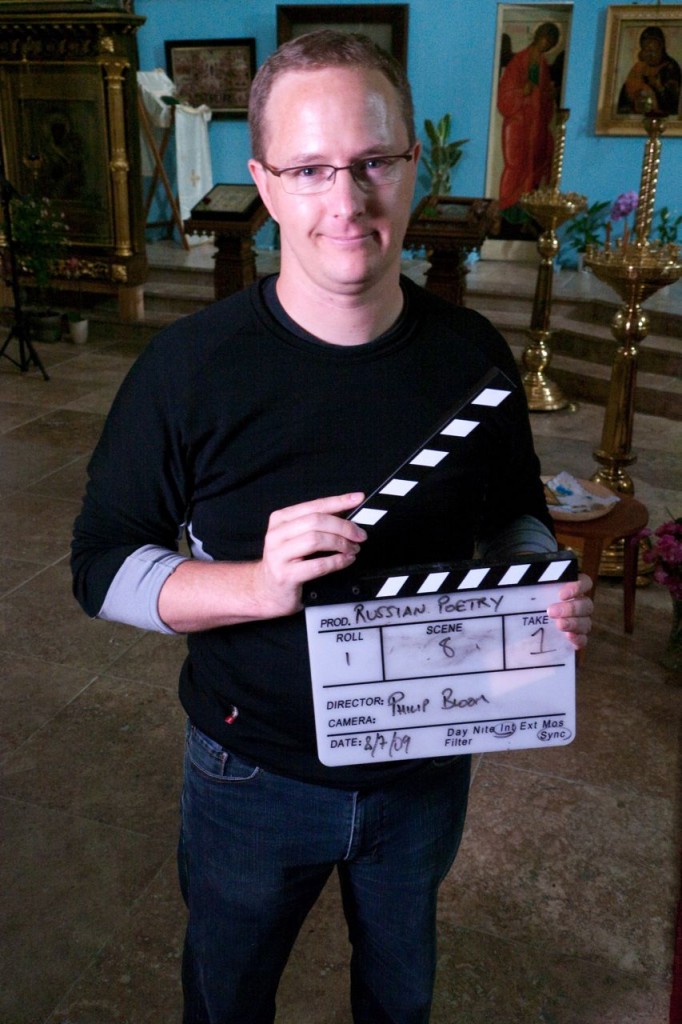 Obviously I could not label each take in camera, i just did it after offloading, taking it from the clapperboard.

Inside we had two main locations. The crypt and the main chapel. The crypt had no daylight and was lit mostly with candles. I did use one Dedo 150 to give me a splash of light on one wall but very faded down. There was some ambient lights on faders in the room, which I sometimes had one, sometimes turned off, depending on the shoot, but they gave a little extra fill at time when I needed it. I kept the balance to tungsten as I wanted it to look orange, like candlelight, not take it away. 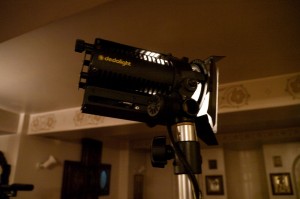 I had my MBP 13″ with me for offloading, using the lexar FW800 CF reader again. I did bring with the Small HD monitor but forgot to bring the mains. Whoops! Because the shots were mostly static or with small movement, I just used the LCD  and zoomed in to pinpoint focus, occasionally I used the Z-Finder but didn’t need it as my eye didn’t need to be pressed up against it the whole time. I wish I had the monitor working for this shoot, would have been much easier.

Tripod wise I used my LOVELY Miller carbon fiber Solo with DS20 head, perfect for this set up, although the DS10 would be fine too. I loved how light, stable and how high and low this tripod can do. 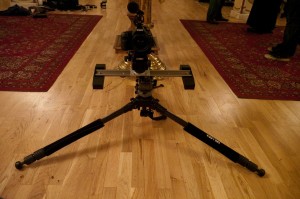 I had some issues during the shoot with noise at some low ISOs and I couldn’t for the life of me work it out. I reset all camera settings, took battery out and put back in and it seemed to be better. But I does seem that some intermediate ISOs create more noise than more traditional higher ISO numbers. I need to get to the bottom of this. In the end, everything I shot looked remarkably clean, even the stuff lit by just one candle with the dedo in the background. Incredibly dark. You have to be really careful with the metering on the camera, don’t trust it all the time. If I went with the metering guide and exposed on some of the candle stuff I would have lost all the ambience, so I kept it well under for the most part and it was beautiful. Don’t judge the image from this compressed vimeo version.

Upstairs in the chapel there were lots of windows but it was a really shitty day outside so very dark, but I made the most of this. I put up a single Kino Flow 4 bulb Diva, with three daylight bulbs in and and one tungsten, using the available window light as backlights, fill, ambience. I was able to keep a real atmosphere going.

On the second shot in the below video I used a Wally Dolly, a very lightweight and easy to set up self operated dolly and track system. I set the focus for the end point  on the lens and marked it off on the track and simply slowly tracked in until I got Boris into the shallow DOF focus. I used the Zeiss 85mm for that shot. 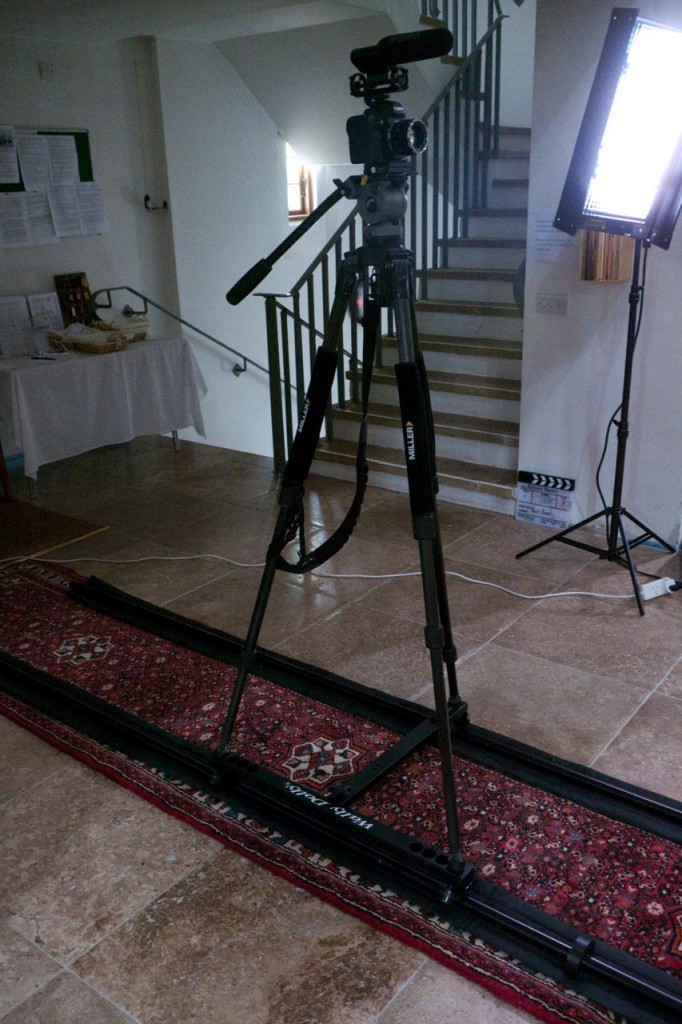 The poems are mostly about the church but there were 5 which were secular so we did one against a very minimalist white wall and bench in the Church and the rest we filmed down down by the Thames. This is where the other cool toy I have came in handy. the Vari-ND and Fader ND, check out my last blog for my info on them but they gave me the ability to keep the shutter down to 1/60th for the entire shoot. With the 30fps 5d, try and keep shutter to 1/60th if you can for optimum film motion. Having the Vari-Nd on the front gives you almost a second iris control but just for ND, giving you the ability to stay at the f-stop you want for your depth of field of choice but not have to change shutter speed to bring down exposure. 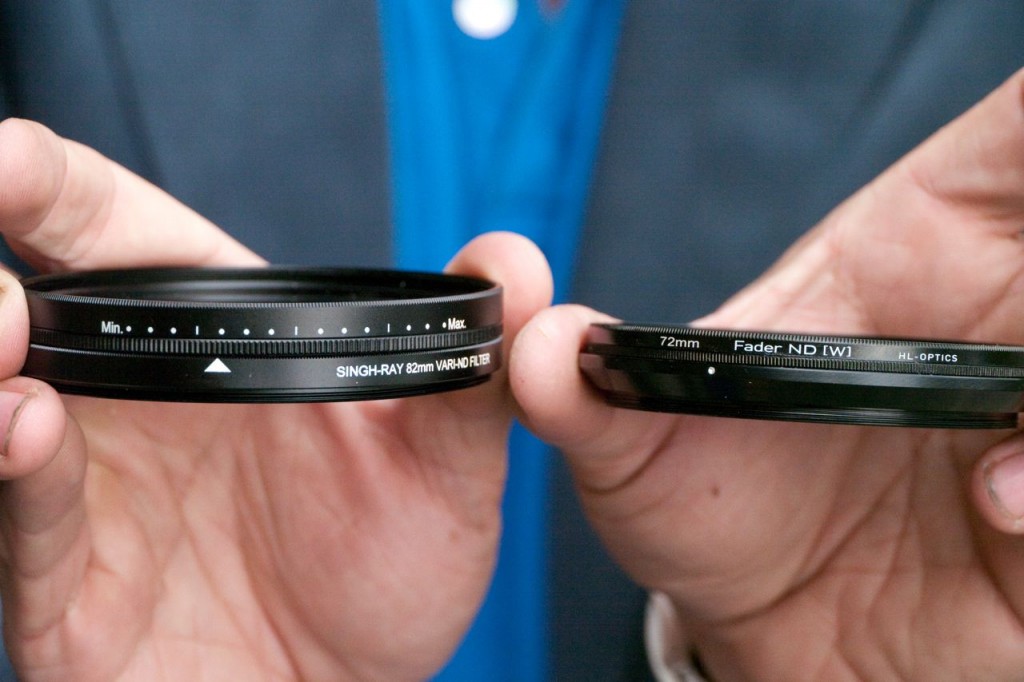 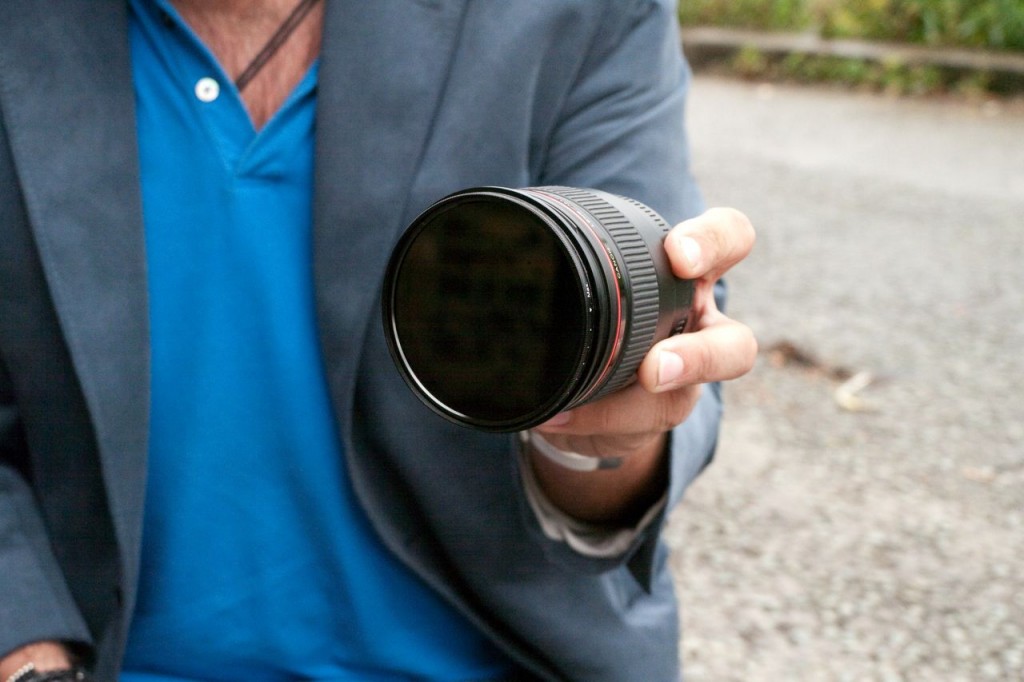 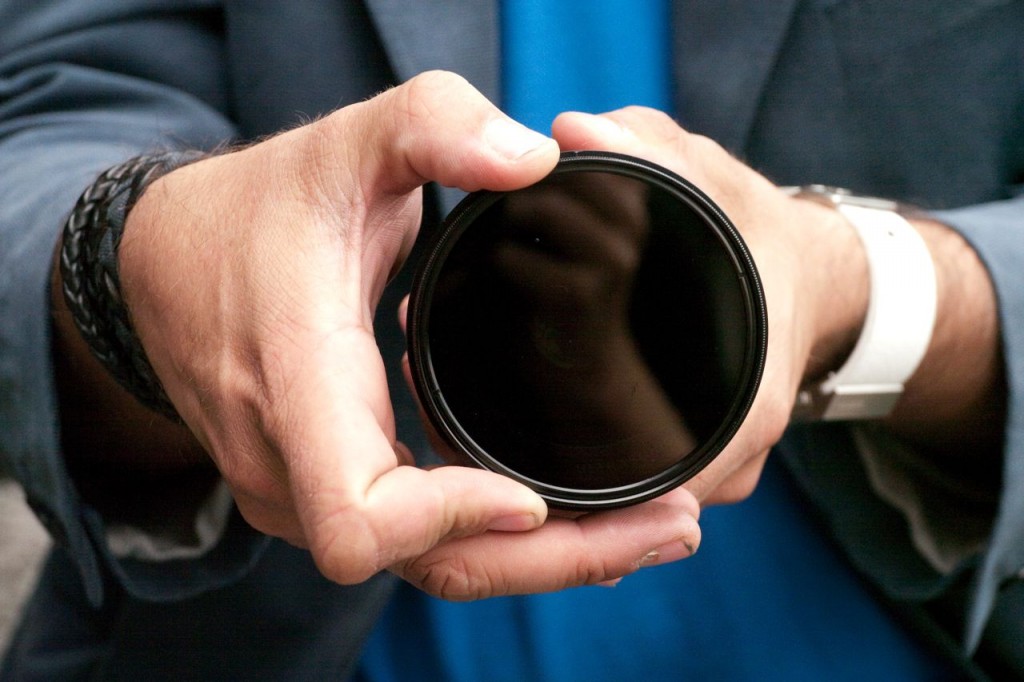 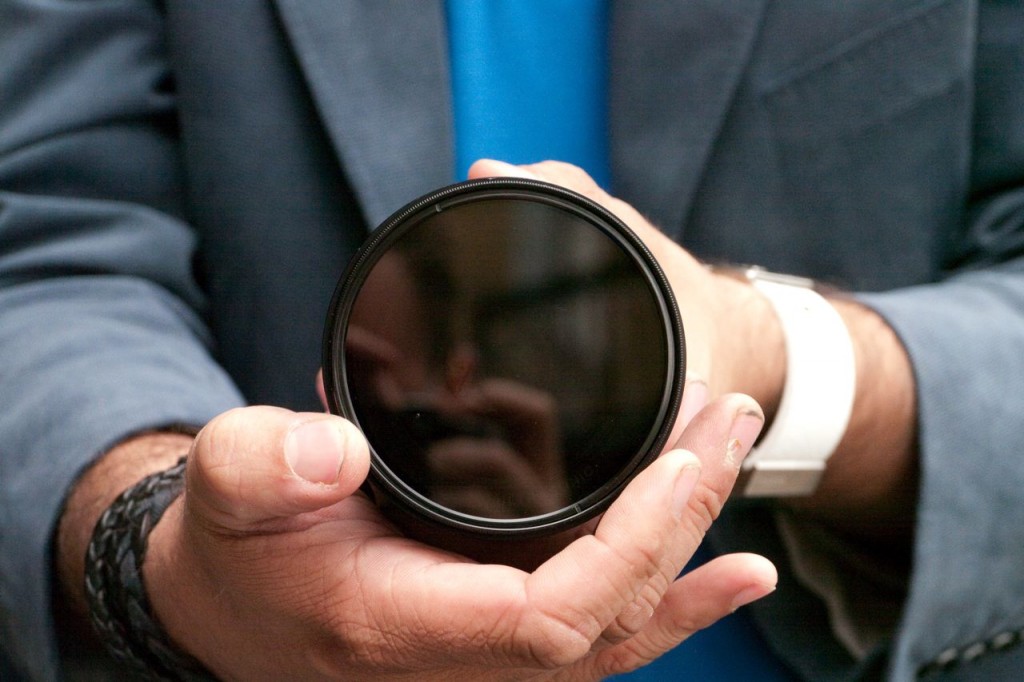 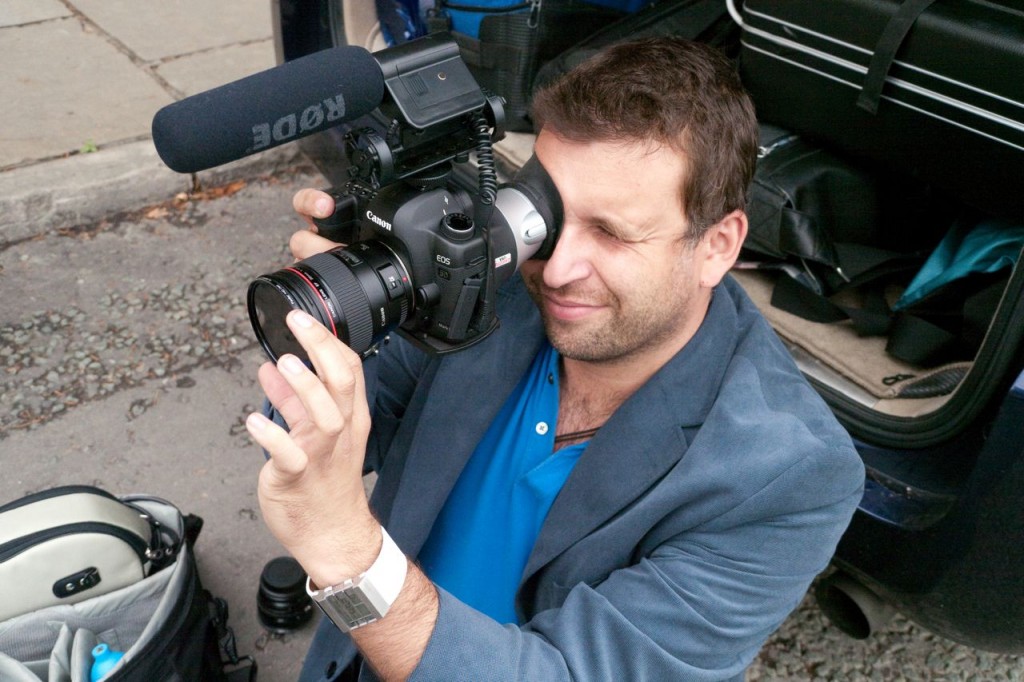 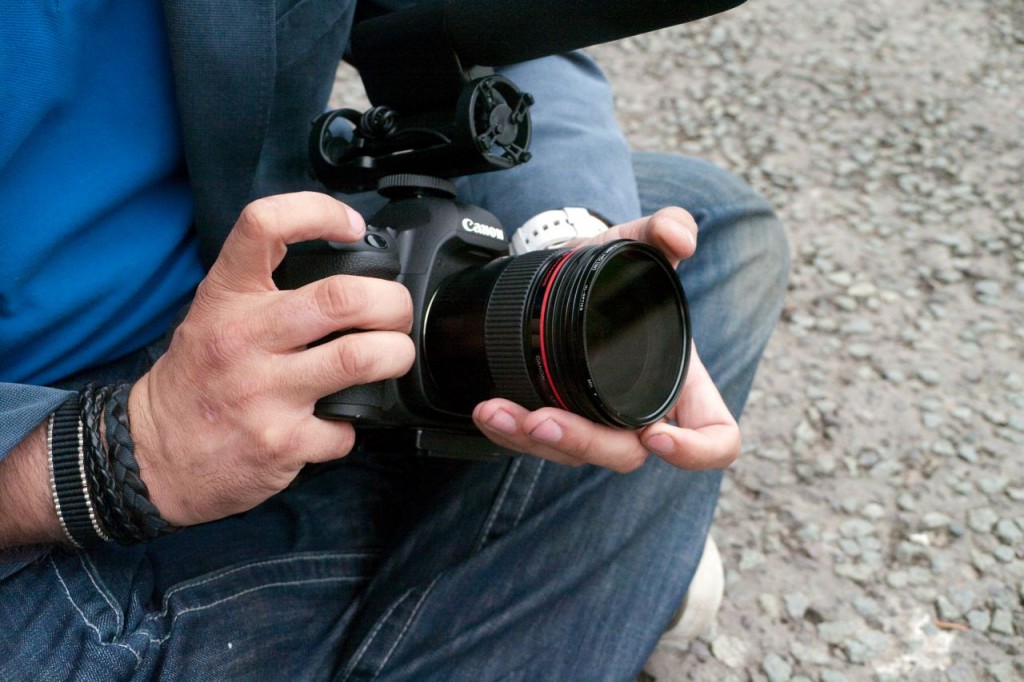 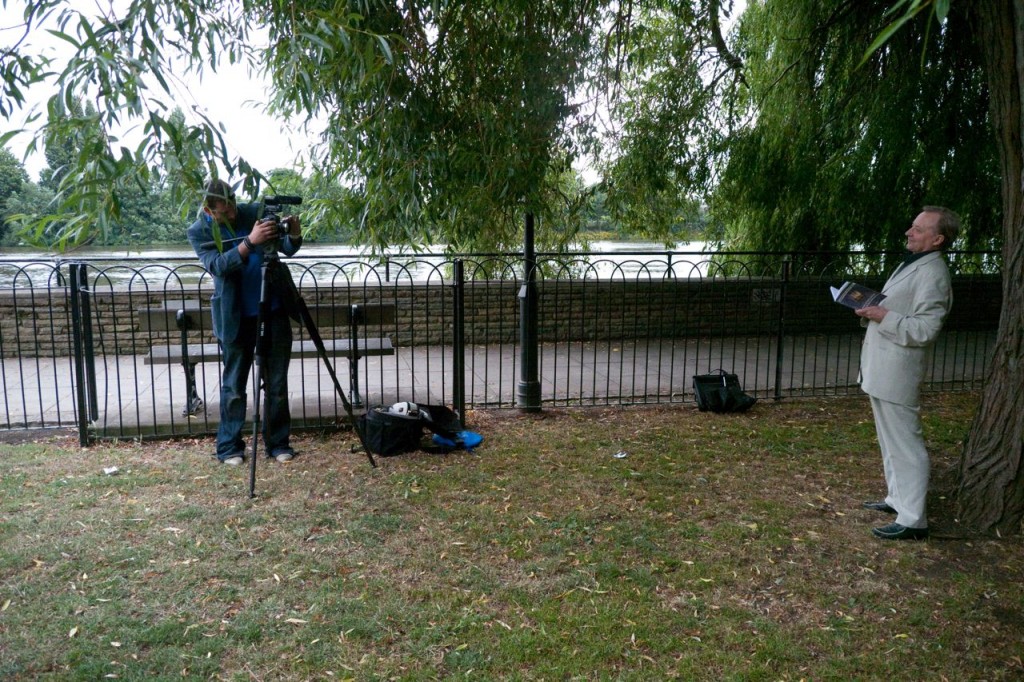 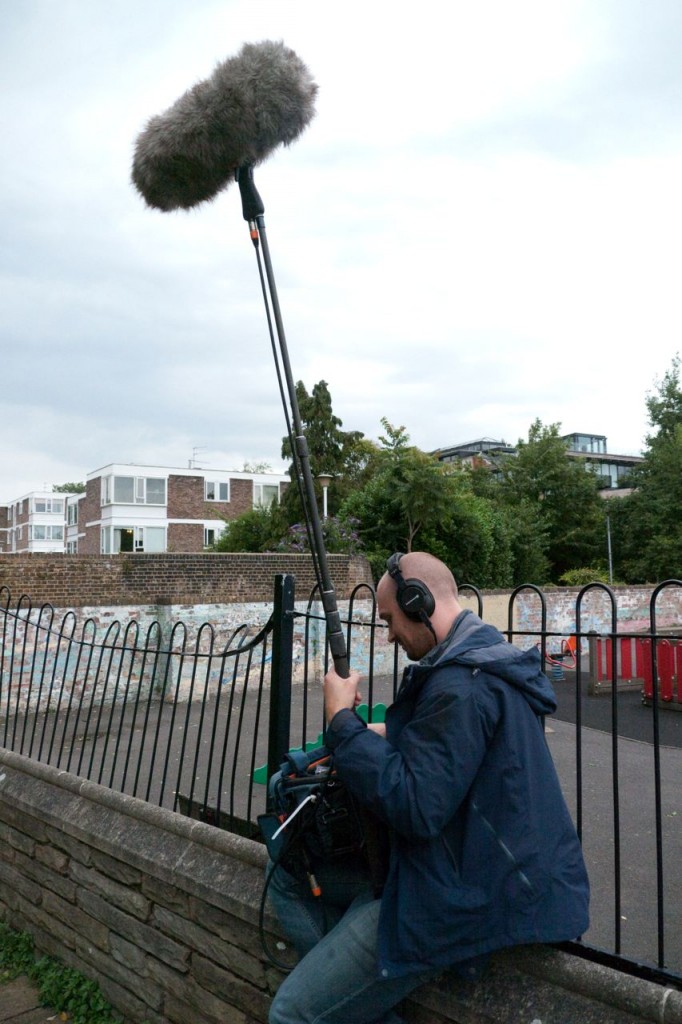 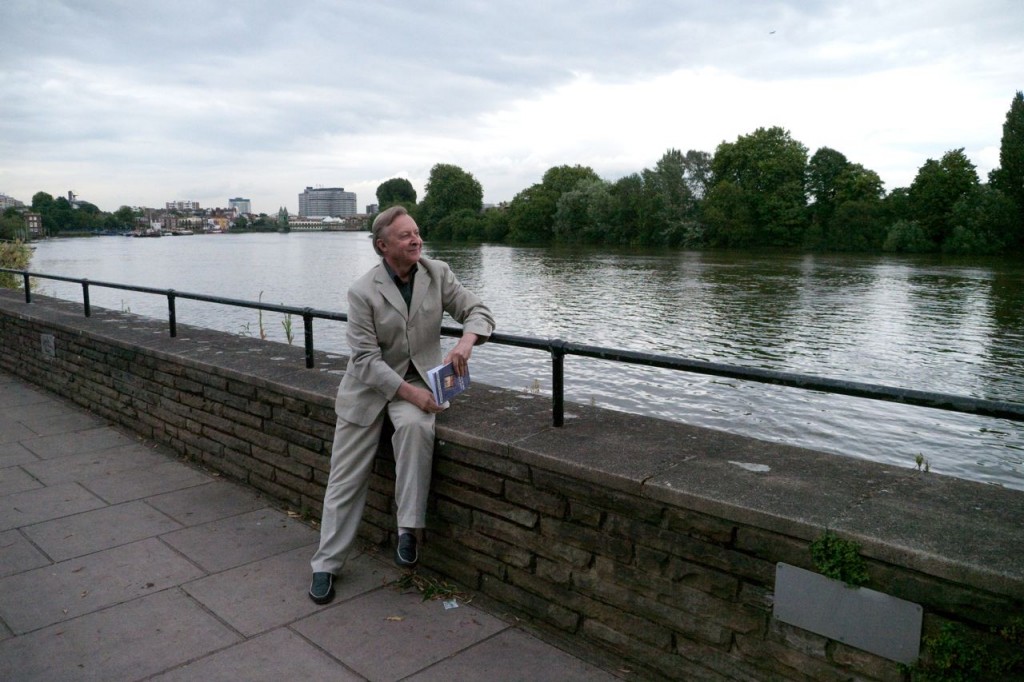 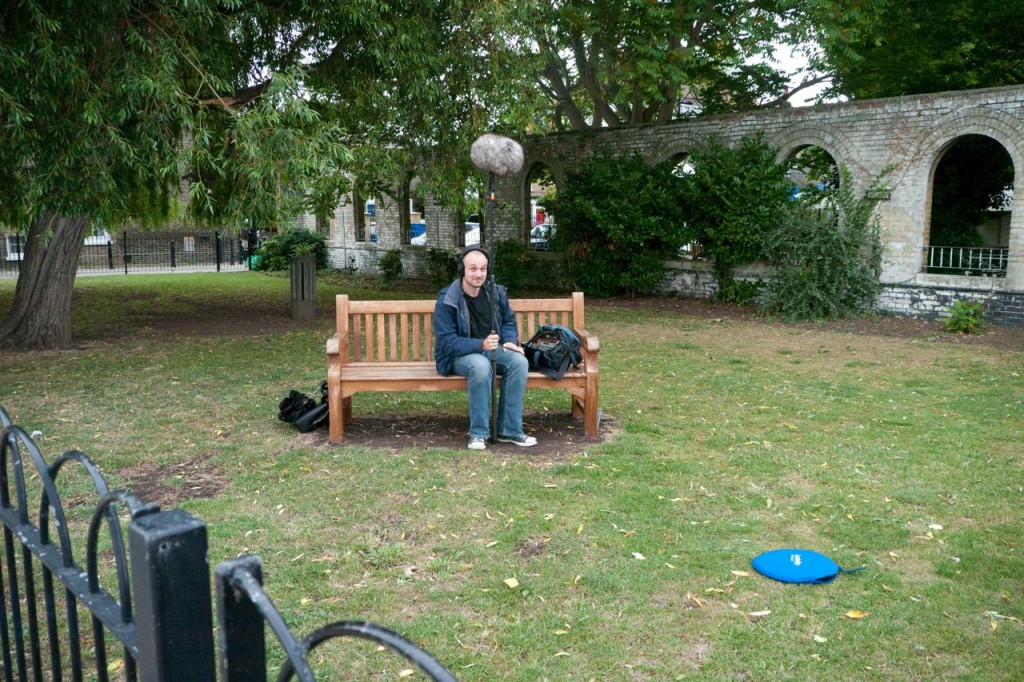 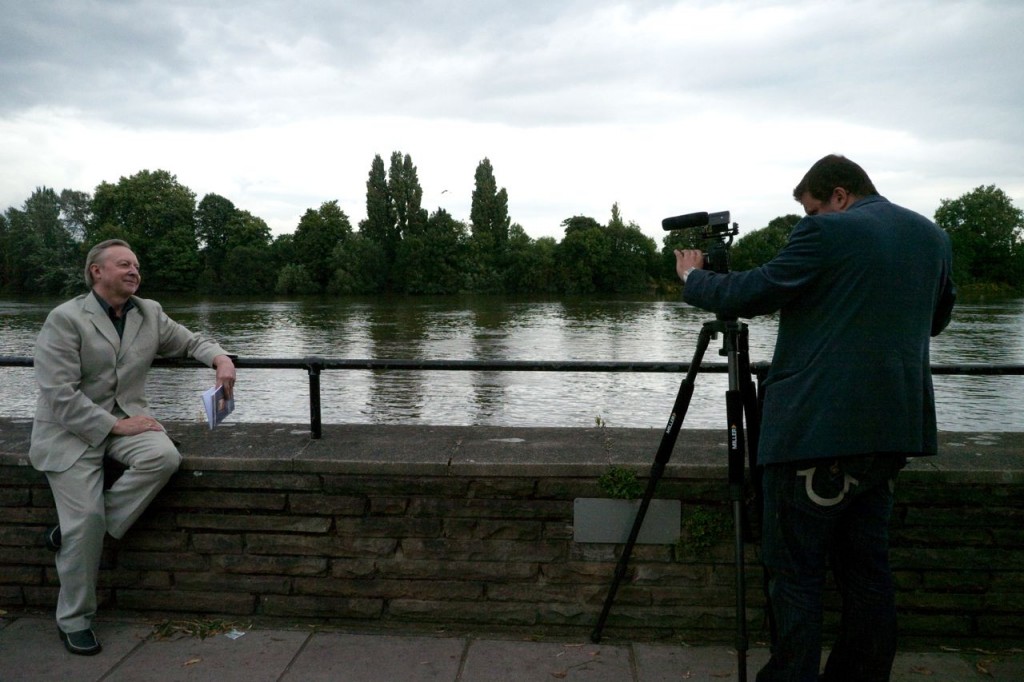 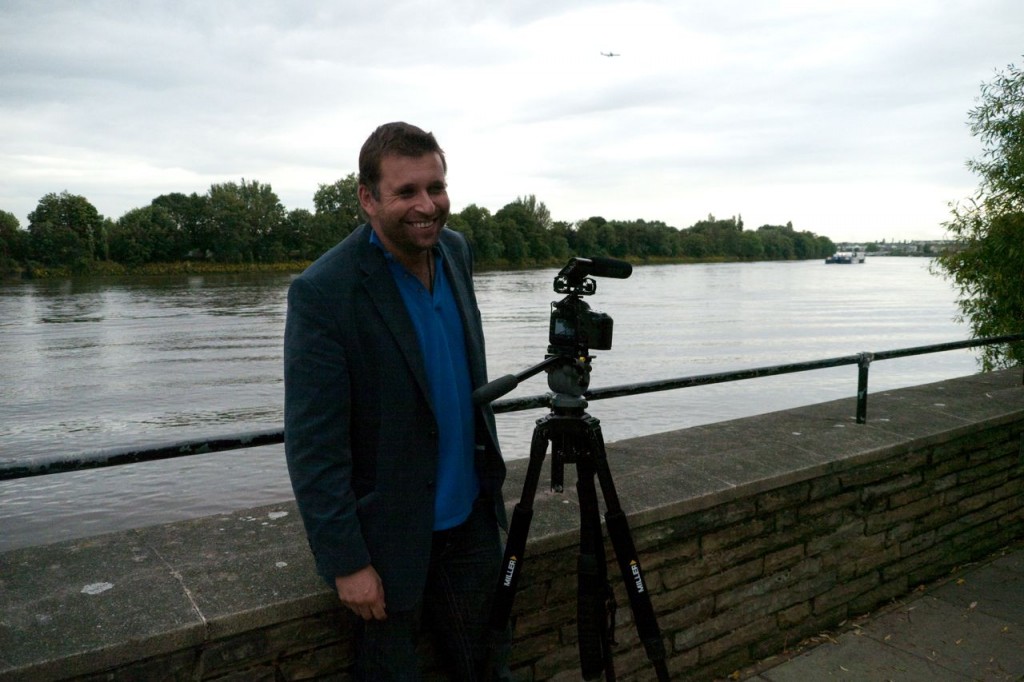 In the end i had about 15gbs of video and 1.2gb of sound. So just two cards used.

I put together a little edit for the client to have a look at some of the different shots. It makes no sense am sure, my Russian is not good, as it is mostly the first line from each of the 16 poems we filmed. So please, if you understand Russian, don’t complain to me that it doesn’t work, it’s not supposed to! It’s supposed to show the client a flavour of what to expect! Each poem was filmed in two different shots, a wider and a tight. Very simple, but it needed to be with 16 to get through in one day!

Once again, it was a pleasure shooting on this camera. Get round it’s flaws and you can create some lovely stuff. Just don’t expect it to be the perfect camera for every job. It’s great for some, not for others!

So here below is the test edit of excerpts from the poems. Enjoy!