You can win incredible gear or software worth thousands by donating to the prostate cancer fundraiser here! Great cause great prizes!!!

WARNING: This is dangerous. PLEASE DO NOT ATTEMPT THIS!!!

As I said when I came here, my plan was to shoot a mini doc in each of the places I visit, instead of having a day off! Days off are lovely, but shooting is more fun and when I am teaching on longer trips like this 3 week one, not shooting would send me insane!
So with Jo’Burg done with “Ponte Tower” and Cape Town done with “Portrait of a projectionist,” I was in Durban and on the hunt for a story. You can see those other mini docs at the bottom of the page.
I had a couple of locals on the hunt for a story, but my brief to them was so vague. I wanted something that will surprise. I also wanted something that was more African than I had done so far. I didn’t want to do poverty for sure. People have become desensitised unfortunately to images of poverty. I would make a mini doc featuring that if I could an upbeat positive vibe to go with it.
A couple of things were suggested to me, but like in Cape Town nothing clicked. Was I concerned? Not really. Would I prefer something set up the night before? Of course! But we didn’t in Cape Town and we got lucky finding Redwaan.
So the morning was upon us. Grey as England. The beautiful light of the previous day was but a distant memory. This was the light of Blackpool, not Durban. A real shame, especially since this was my only day to shoot, so I had to go with it.
One of the potentials was down on the beach there are these guys who look after cars in car parks. They are often skilled and white collar people from other African countries who have fled to South Africa and are making ends meet by working for small tips. Interesting, but nothing that jumped out at me. Then on the beach I saw a huge amount of Indians fishing on the pier. Apparently Durban has the greatest concentration of Indian people in a metropolitan area of any place in the world. I found this interesting….the fisherman images looked nice…a possible story.
Oh, forgot to mention. Today was the turn of the FS700…Ponte was the Blackmagic, Projectionist was the 1DX…Sony time for this. Not for the super slow motion. Just because I really wanted to use it and shoot with it.
As I was shooting some super slow motion of the water, I saw this woman scooping up sea water in a plastic container. I asked the guys I was with what was going on there…”Oh lots of Africans drink sea water here.”
WHAT?!! THEY DRINK SEA WATER?!?! WHY!?!? THAT’S CRAZY!?!? IT’S SO BAD FOR YOU!!!! THIS IS MY STORY!!
So with a story in place (and it’s funny how they just pop up, like in Cape Town) I set off to get what I needed.
Lots of shots of people scooping water, young and old.
Atmospheric shots of the beach
Someone explaining on camera why they do this AND to film them drinking it.
This was all I needed to make my short doc.
So with one of the attendees Stuart Whalley helping me out, we went to a few beaches to grab those shots. Unfortunately I was not prepared to film this story as I was wearing my nice Nike trainers and jeans…no matter…I had shots to get, screw the clothes! I needed to get RIGHT in the water with these people…without getting the camera wet! Just make sure you take your iPhone 5 out of your pocket…that was a close one! 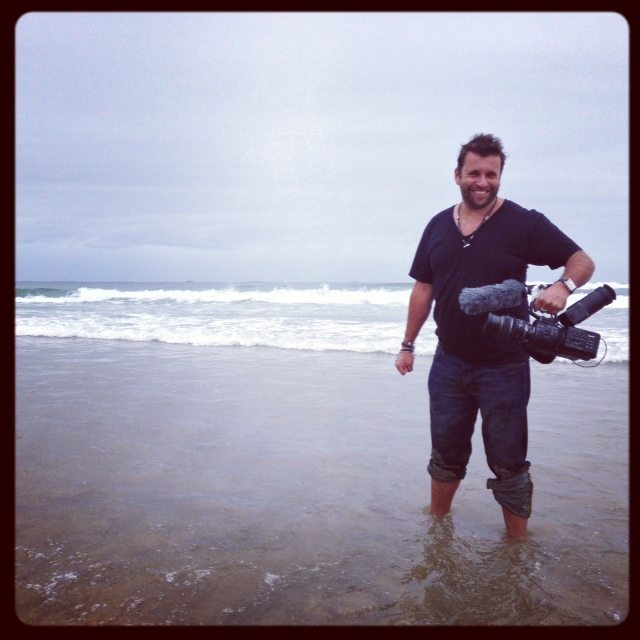 For the vast majority of this piece I shot with the optically-excellent, but mechanically a pain in the arse, 17-55 F2.8 Canon with IS. A great handheld lens for APS-C and Super 35mm. I also used my “sniper lens” the Canon 100-400 for picking off long shots and lots of those super slow motion shots.
After getting the shots I needed (more than needed…always shoot more than you need. Obviously NEVER shoot less than you need! ), I needed a voice. Stuart came across this lovely chatty fella and he was happy to be interviewed and for us to film him drinking, AND he was staying in Durban. Most people who do this come for 5,6,7,8 hours away! Rather too far for me to follow!
So we went back with him to his depressing as hell TINY little room in this massive block. It was literally barely bigger than his bed. No space either side of the bed and just enough space to open the inwards swinging door!

This was the place for me to do the interview. I had done a few interview grabs whilst shooting earlier and got the sound on the RODE NTG-2, but hadn’t planned on it to and had no headphones in, so I needed to make sure I covered all those points again, just in case!
This really was a day of challenging lighting. Grey and rainy murkiness outside, and his room had NO natural light…the only light was a single bulb high up. Ugly. I stupidly left my mini LED light in Cape Town in the hotel, so I was down the only light I brought with me. I also stupidly forgot my get out of jail free card, my iPad, which I often use in situations where I need a teeny bit more light on faces. Here I needed a catchlight on Siphelele as his eyes were lost…I had no iPad. I had no bounce. I had nothing. I had a choice. Shoot it or not shoot it. I went with the obvious answer.
I shot the interview with three lenses. The 50mm F1.2  Canon. The Rokinon/ Samyang 24mm F1.4 and the Tokina 11-16 F2.8. I like the wide angle best here. I loved the lines, the shadow on the fan…stupidly forgot to ask him to take his coat down in the background. Once I had started, two questions in, I noticed it and went damn…too late to remove it as he needed to get back and we needed to be fast. Yeah the interview lighting is poor, but the key thing is that he was SO engaging, such a big smile and a great talker, that the lighting issue went away. Also the quality of the sound was top notch. My fav lav mic, the Sanken Cos 11, straight into the FS700.
After getting all I needed from him that was it…a wrap!
How was the camera to shoot with? Pretty good. I hate the screen and loop of this camera – like with the FS100 I normally always use a monitor. Not possible here so I had to deal with it. Not ideal. I didn’t use a rig either. With the excellent Metabones 2 Canon lens adaptor for the camera’s E mount, my IS worked fine and my iris worked through the camera. Much like my C300 would have done. Yes. I prefer the image of the C300 very much, I also think it is one of the most ergonomically friendly cams there BUT I didn’t have it with me. I chose this cam for the super slow motion leopards and tigers of Kruger park (my latest doc) and the C300 doesn’t really do any decent slow motion. Just 60 fps.
Back to the hotel, quick offload, edit native on CS6, coloured in Colorista II…trying so hard to make those grey shots look good and seeing what I could do with the interview lighting. Music too..in the end I found a couple of nice tracks of Kevin MaCloud tracks which were African but not cliched African. The edit was done pretty fast, the upload was super slow as the internet here is really quite slow, and when it went up I noticed a flash frame….damn!
Tweaked and reuploaded and I was done, until I realised I had used the same shot twice. Whoops. So as I sit here in Kruger Park writing this when I really should be sleeping since I need to get up at 4:50AM, I am uploading the tweaked version again…it’s only 280mb but it says 9 hours…oh well!
Tomorrow is yet another mini doc…longer, maybe 10 minutes. I have a potentially great subject and amazing scenery. I can’t wait. It’s my last film of the trip before I go home!

The sea water drinkers from Philip Bloom on Vimeo.