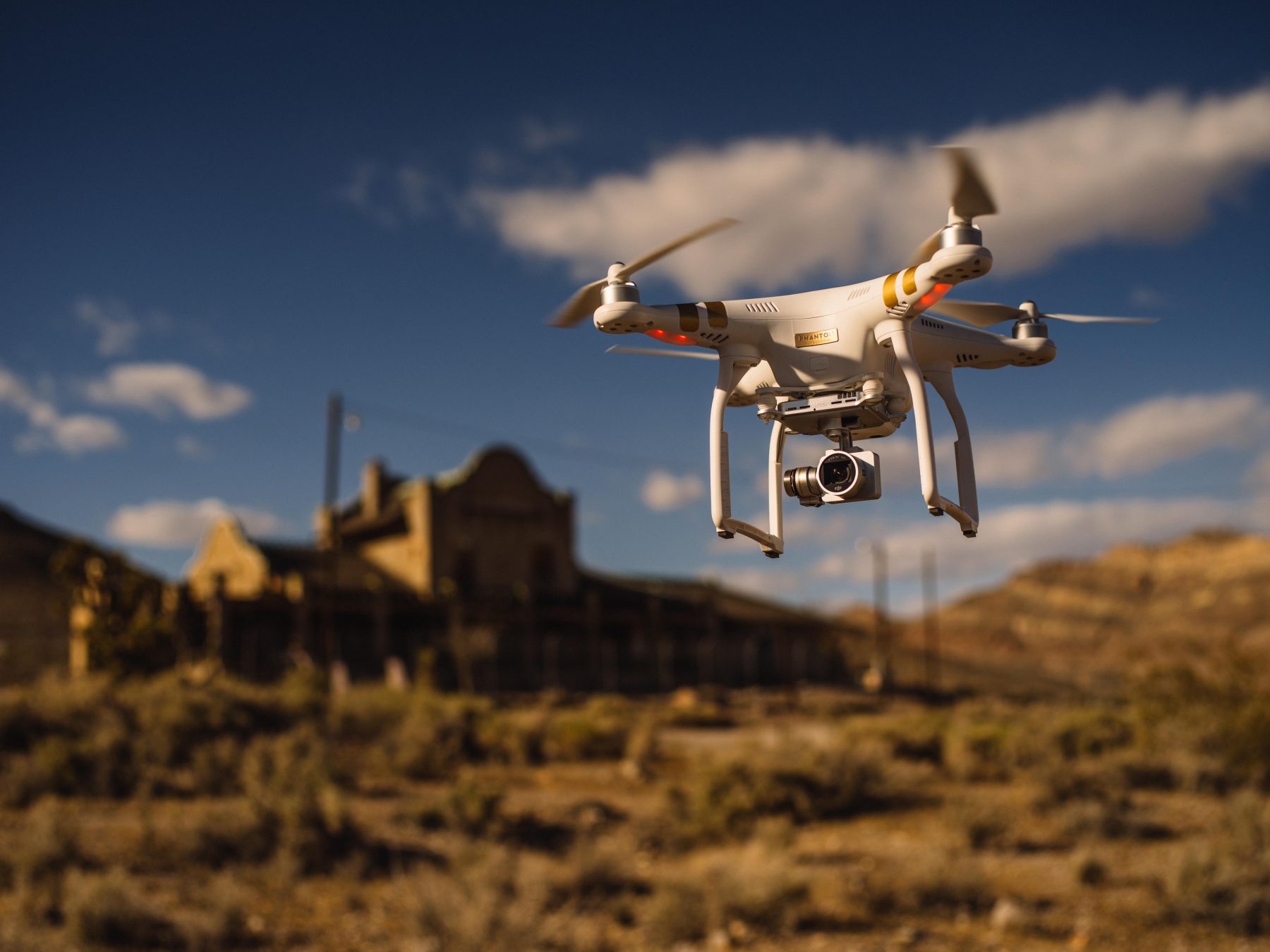 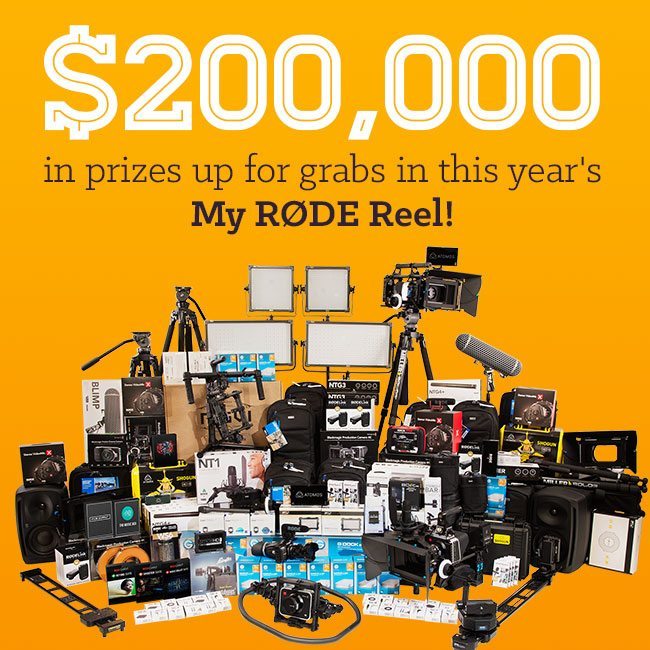 This is not a review of the new DJI Phantom P3, nor will I be doing one. I was hired by DJI earlier this month to talk about my experience flying with the P2 & Inspire 1 at the launch event for the P3 in New York. So naturally it’s ethically unsound to have a review by me. I am sure many people who aren’t in the same situation who will do one. What I am sharing here is my 1st edit of some P3 filming I did after NAB, along with what I love about drones in general, some brief thoughts on the P3 over the P2 (remember not a review, so please take this into account) and a little look comparing it to my favourite drone, the Inspire One.

There are purchases links for the P3 via B&H in this post. Using these gives me a small affiliate percentage which costs you nothing but helps in a small way to keep the site going, but please don’t buy based on my words alone here…seek out other opinions first!

The photos of the Rhyolite shoot are taken with the Pentax 645z medium format camera and were taken by myself or Chloe Baxter.

If you want to skip all my thoughts and info then the video is at the end of the post! 🙂

Thank you and happy flying!

I am not a professional aerial cinematographer. It’s a tiny part of my work…really tiny. Very little of what I film is drone flying. I “dabble” really, I have basic skills but I am always trying to improve upon them. By luck I managed to win best travel/ landscape film at the New York Drone Film Festival with my little film I shot on holiday in Thailand last May. Very flattering to win for sure of course!

Flying drones is a joy, and if I can use them in my work, legality permitting, I will if I feel it can add something and not get in the way. Like most specialty gear, moderation is key. I haven’t put out an entirely drone shot piece of work since that Thailand film. This is the first thing since then really, not really comparable, and it’s only because the P3 is new and I am testing it out.

For me, these tools are the greatest advancement in filming in years. So freeing, able to achieve movements in shots that would be impossible any other way or else incredibly expensive and difficult. Also the ability to get angles which would also not be possible is a huge reason why I adore these. 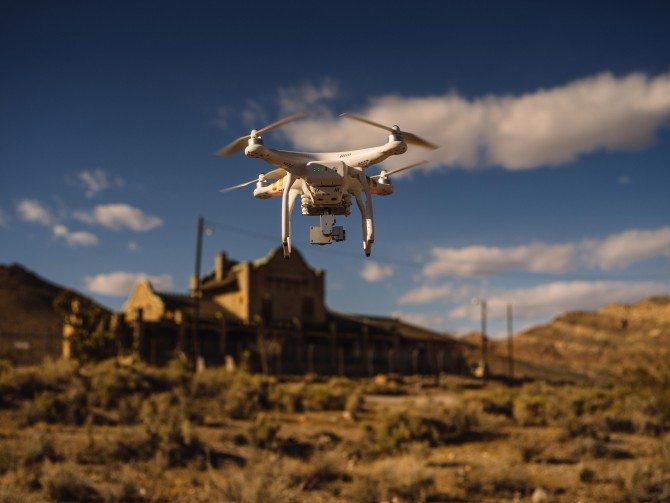 The impossible dolly shot, the jib shot that never ends… just wonderful tools. There are many downsides which were covered in a series of posts on my site a year ago, which I thoroughly recommend checking out if you are looking to get into this, either professionally or just for fun.

It’s only been just over a year since I flew my fist Phantom, and there was a learning curve. It’s easy to buy one of these and zip them up into the air stupidly high then go really fast in a direction. Of course that is a recipe for disaster. I have had my fair share of crashes with drones and lost one for good early on in the Atlantic when I descended too rapidly. The thing is you learn from these things…hopefully!

After that, I practiced in the desert a year ago in Nevada so the controls would become instinctive. You need to do that. Things have also progressed a hell of a lot in a short time. From a hash together of 3rd party components to get an image and data from the drone to me…stuff like Lightbridge came along which gave a stunning clear digital feed and so much telemetry info, but was very expensive. Then it was integrated into the Inspire 1 which also gave fantastic stability in wind the Phantom couldn’t fly in, dual control, 360 ability as the landing gear raised, removable camera, ability to fly indoors without GPS and be controlled due to sensors facing down, clean HDMI out of the controller, full manual control of the camera from the same controller…just a total joy. Now DJI have put a lot of that into the P3. 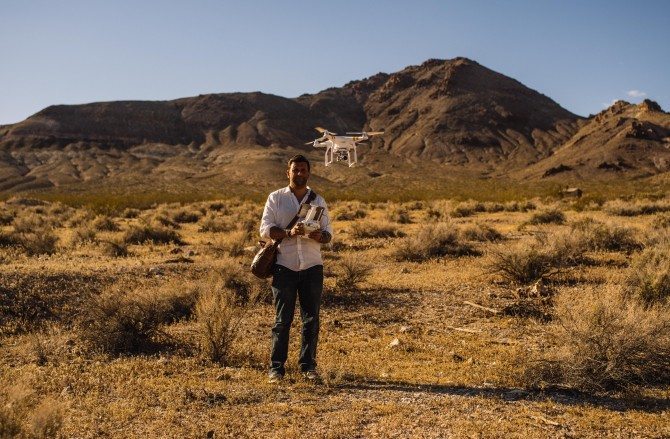 The camera, I believe, is the same one as in the Inspire 1. This will make many question why they should get that more expensive craft then. If you don’t use dual controllers, then there is a still a big difference. That stability is incredible, and I missed it enormously when going back to a Phantom to fly. Phantoms are great in mild conditions, but I love to do intricate moves and if that wind is howling a gale, forget it! It’s hard enough flying it, let along trying to fly through stuff! Plus the clean full HD HDMI, removable camera, raised landing gears so the camera sits lower meaning no props in shot. There are lots of big plusses to the Inspire 1 still.

One of the best things to come across is the much, much better controller. Being able to change camera settings like a DSLR on it is a joy, as is the gimbal tilt. So smooth. A world away from the plastic flimsiness of the P2 controller gimbal tilt. 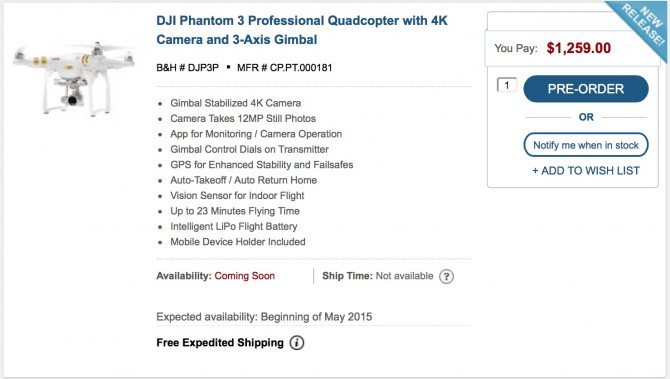 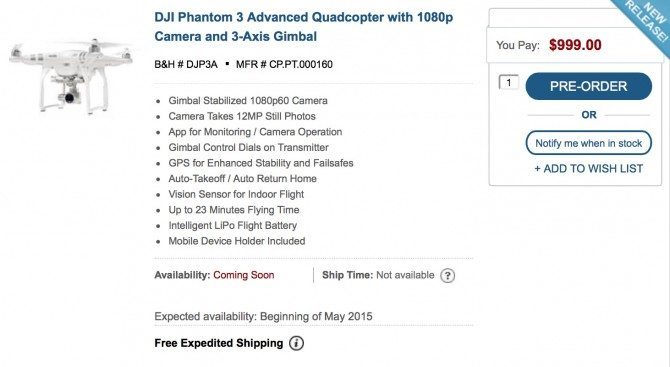 Many will bemoan the loss of compatibility with GoPros. I totally get that. The GoPro Hero 4 is a gorgeous camera, and I do love that ProTune. The P3 and Inspire 1 have a log mode but it’s not quite ProTune, hopefully things will improve on that front. It’s a pretty terrific little camera in the P3 though, as you can see from the stuff I am sharing here. It also doesn’t have the distortion that the GoPro has. It’s a rectilinear lens with a 94 degree field of view.

I filmed in log mode with sharpness set to -1. Default sharpness is too sharp. Below -1 I find it goes a bit mushy and hard to pull back. -1 seems to be the sweet spot.

Here are some of the key features of the P3. You can learn a lot more by going to the DJI website about it where I took these images from. 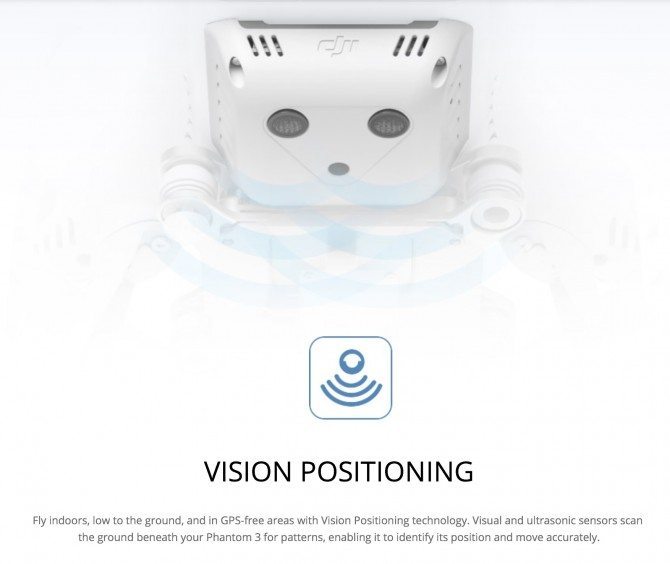 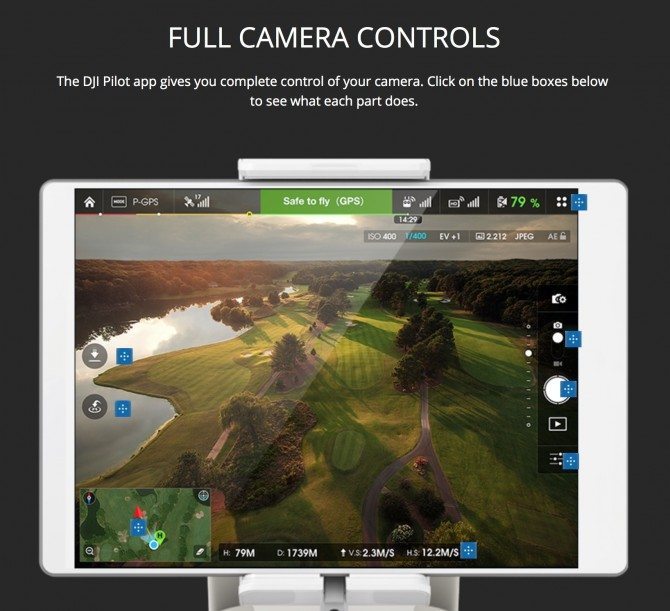 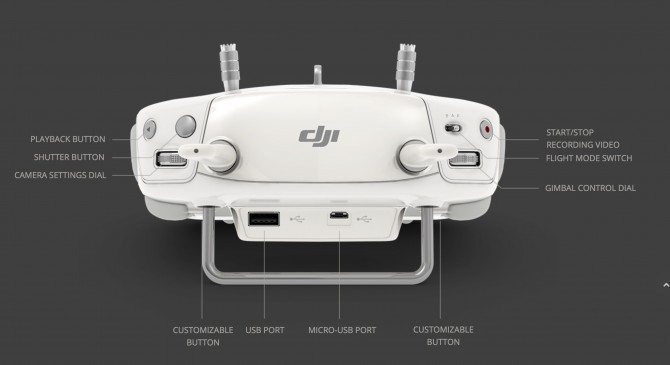 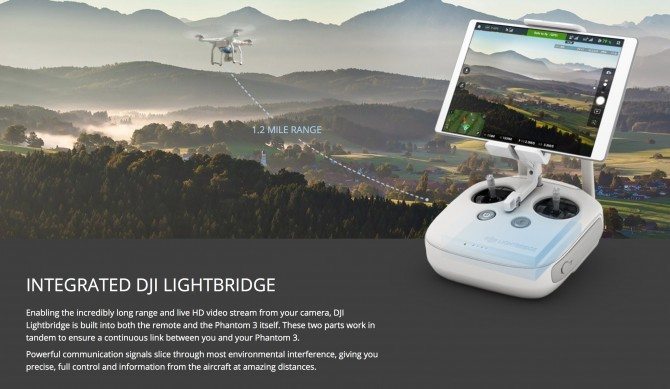 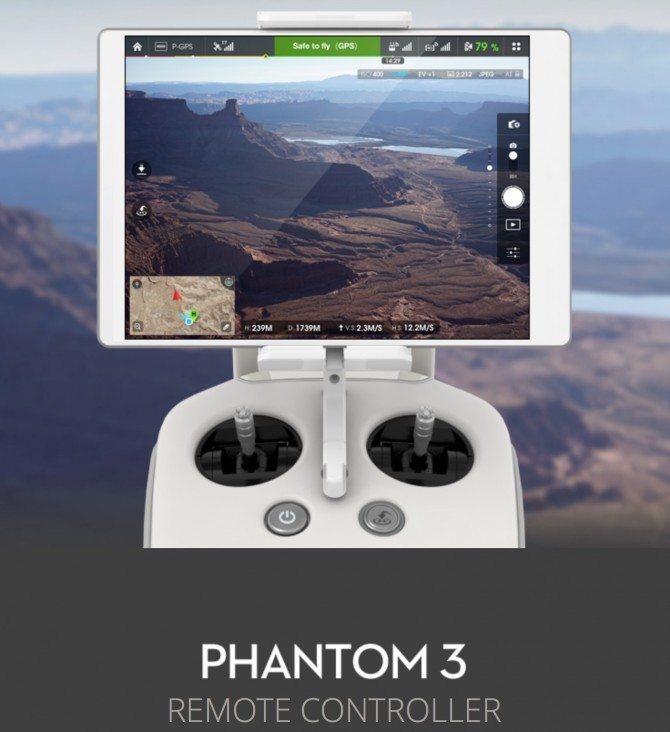 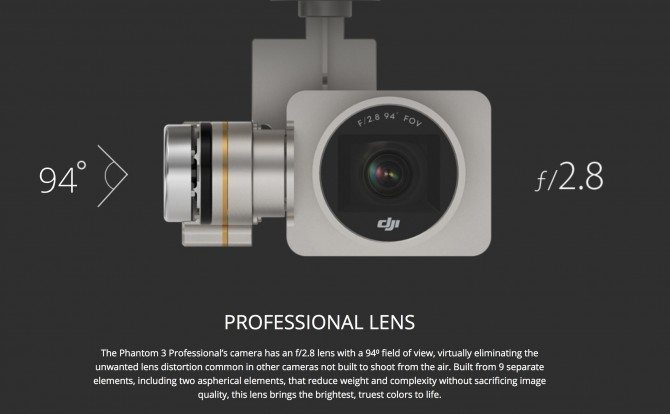 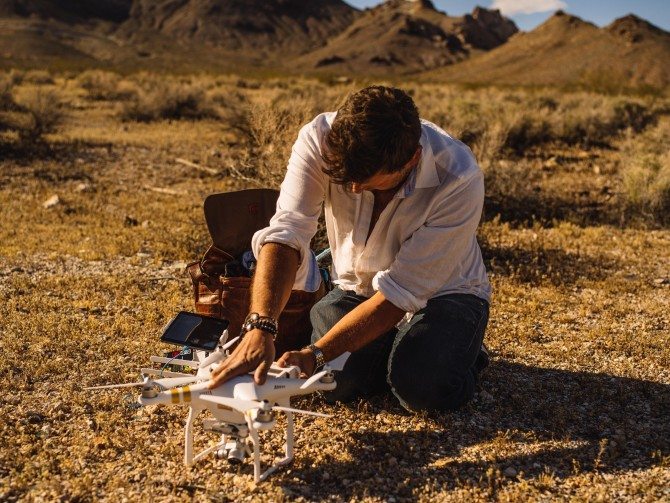 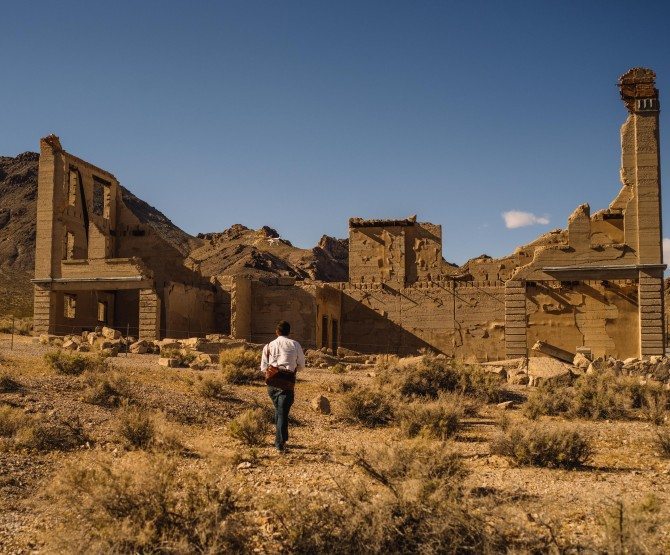 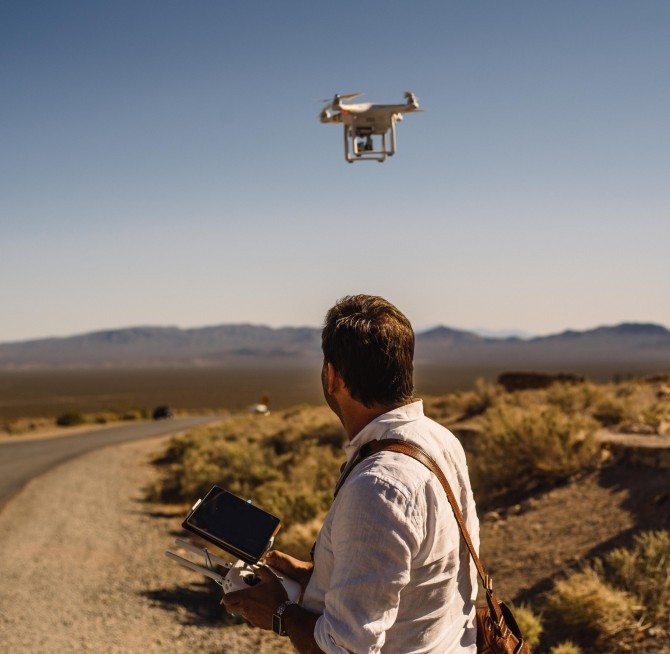 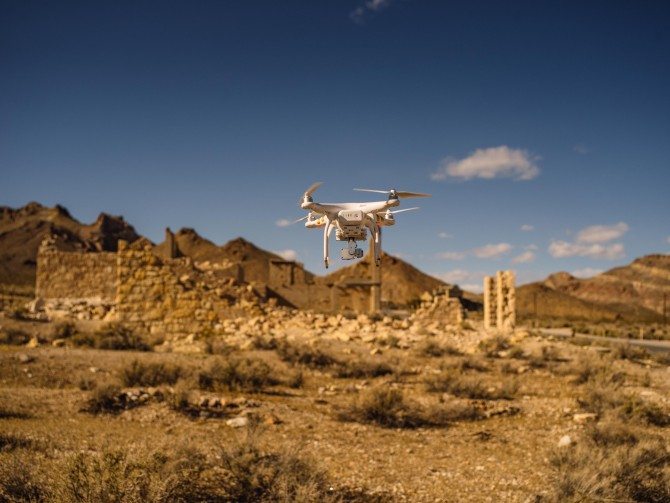 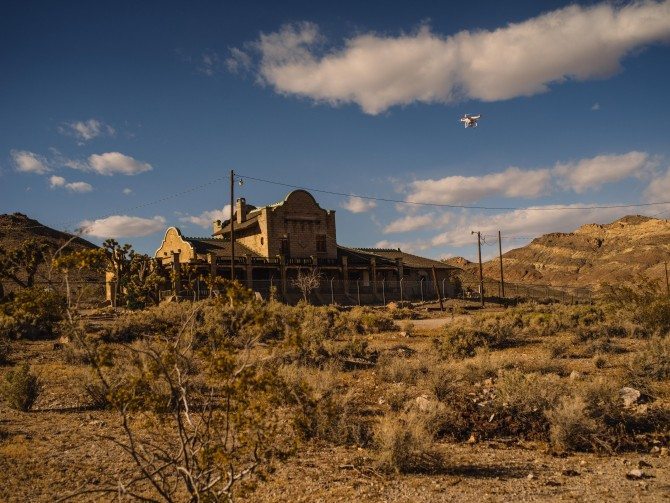 Rhyolite is such a cool place, I haven’t been there for 6 or 7 years. Last time I filmed there was during NAB back then and with an EX1 and Letus Ultimate. Those were the days! 🙂

Oh, one last thing. The stills are also very nice indeed. 12mp raw. It’s easy to switch between stills and video with the DJI app. I haven’t gone into all the features like live streaming and the editing app. Check it out on the DJI website. I haven’t used these features but they are neat from what I have seen from others using them.

So here is my little edit. It’s downloadable compressed 4K from Vimeo if you are a plus or pro member. If you aren’t, then you can download the even more compressed Vimeo version. I might upload a native clip too when I get a chance…no promises…just remember pre-production unit! 🙂

This was graded with James Miller’s “DeLuts”  and with a bit of Colorista III from RedGiant. I would normally add some FilmConvert grain…I may still do that! 🙂

Below is a montage of shots shot on an Inspire 1 and Phantom 2 plus lots of Freefly Movi M5 with Sony A7s for the CNN series “The Wonder List” that I was director of photography for.

Taking off the DJI Inspire 1 at Reculver Towers and Roman fort from Philip Bloom extras on Vimeo.