Raindance 2012: How to light a Spanish Galleon set with the Underwater Realm’s Eve Hazelton 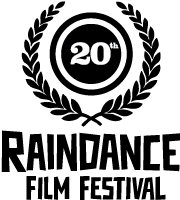 The 20th Raindance festival has just started. It’s 2 weeks of indie features and shorts in competition. It’s the largest indie film festival this side of the Atlantic. Last year the documentary I shot “How to start a revolution” won the best documentary award and this year I am very proud to be on the jury for the shorts section. There are loads of films to go see, and each day there is a screenwriting workshop covering a different topic held by  Bill Martell…it’s just £5 for each class. A crazy bargain!

If you want to check out what films are showing, click here. They are showing at the Apollo in central London on a spiffing 4k projector!

I will be seeing as many films as I can…one thing I really can’t wait for is the screening of the incredible slick series of short films “The Underwater Realm” on Sunday where they still have some tickets left….I have been a big supporter of them since their fantastically inventive kickstarter campaign. A template that I hope others follow rather than just begging for money!

My friend, Eve Hazelton, the super talented DP of the films did three guest posts here, giving some valuable lighting tutorials. You can check them out here and here and here. She’s written a nice in depth blog post again, covering one of here biggest lighting set ups…a Spanish Galleon! Over to Eve!! You can follow Eve on twitter here. 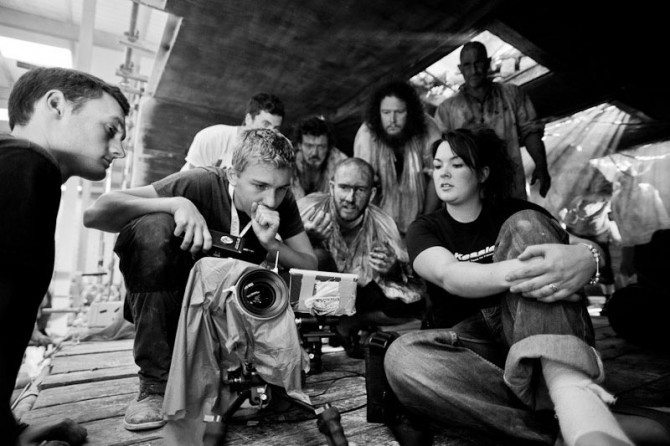 I have been super-busy this year working on the various challenges that have been thrown my way during ‘The Underwater Realm’. It’s been a long hard journey, but with just 5 days of shooting left this year I can see the light at the end of the tunnel!

Ever since last year’s lighting masterclasses I have regularly been asked one thing over and over: “But what is it actually like, lighting on set?”

So… nine busy months later I’m back again at philipbloom.net to talk you through a real life shooting challenge – lighting and lensing our Spanish Galleon set! 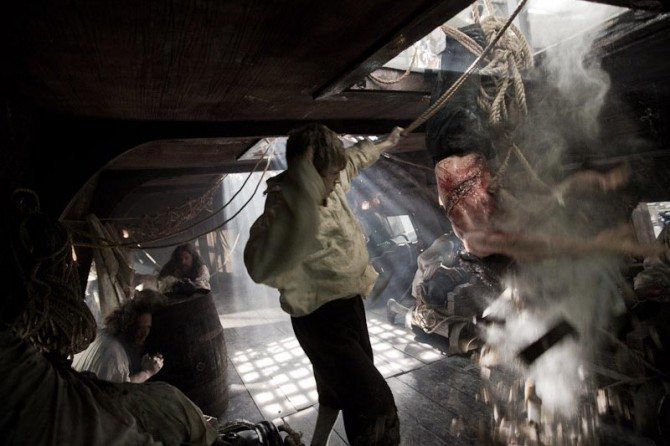 So let’s set the scene. The boys have finished an incredible set build – it’s a 10 meter long gun deck that rocks violently from side to side. We start shooting in 4 days, and I have to figure out how the hell I’m going to light the thing, shoot it, and of course find all the right kit…

The first problem on my mind is power. With such a long set build we couldn’t afford to go to a studio, so we made one ourselves in a disused warehouse. The only trouble (other than the lack of heating water, lighting, toilets…) was the lack of electricity. We had fitted a temporary power line, but it was limited to 40 amps.

Quick power lesson for the uninitiated: 40 amps on a 240 volt supply gives me 9,600 watts to play with – not very much!! Especially when you consider that we have to run the entire unit, including hair and make up, catering, video village… I set myself a limit of 7,000 watts to leave some room for everybody else.

Now ordinarily, 7KW should be enough to light a set that big – but this was no ordinary set… 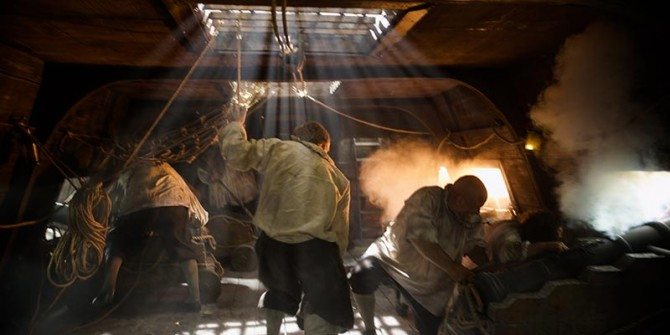 Have I said how awesome this set was? Absolutely beautiful – the whole thing was built on top of a 5 tonne concrete see-saw that allowed us to rock the thing from side to side (with the help of a digger). The cannons would roll, the ropes would sway and the actors would stumble, all creating the illusion that the ship was rolling on the seas.

The entire set was even constructed inside a steel scaffolding cage, so there were infinite places to attach my lights… 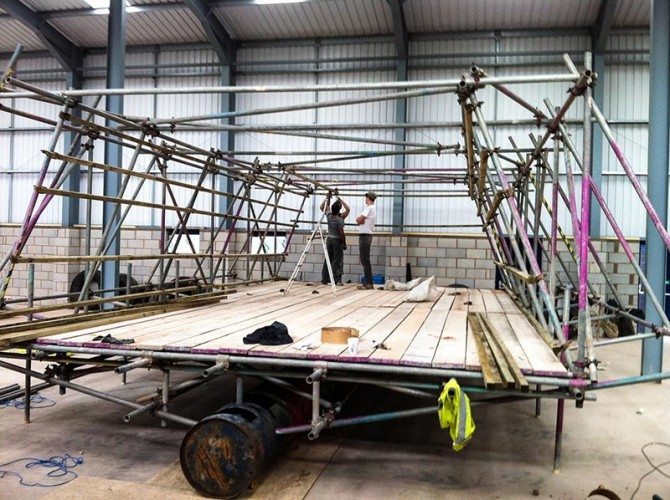 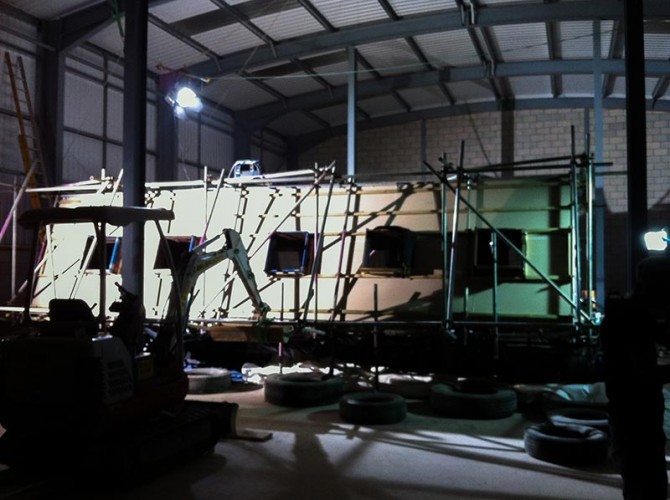 Except – if I mount my lights to the set, they rock with it and the illusion breaks down.

I needed to get my lights outside and away from the ship – and allow them to beam though the various port-holes and grates so that the light and the ship could move independently of one another. The only problem here is that with my lights that far away, we lose a lot of power as the they struggle to punch in from such a distance.

I started off by testing with tungsten lights. I opted for 7x1000w PARS, because they are designed to throw light a long way and are very cheap.

Once I had corrected the PARS to daylight with some CTB gel to match the ambient light in the space, it became very obvious that we weren’t going to have enough light. Even with the epic shooting wide open at T/1.8 we were struggling to get down below 3200 ISO for a decent exposure. It didn’t help that the walls and floor of the set were very very dark – noise city – yuk!

So – I was already at my 7000w limit, I couldn’t bring my lights any closer, and I couldn’t lose that CTB gel without getting a nasty daylight/tungsten colour mix. The answer was obvious – I needed to get my hands on some HMIs. These wonderful (and wonderfully expensive) lights would give me much more “bang for my buck,” their fresnel lenses would allow them to punch in from a long way away, and the icing on the cake is that they are already daylight balanced!

The big problem now is that we start rolling in three days and I have no HMIs – they are really not easy to come by without a budget! Fortunately after a shout out on twitter, I was rescued by the wonderful Tom Smith @videoeuropewhom I had met at Philip’s event in March. Tom and the team at Video Europe are really up for helping indie productions – they have lots of nice toys!

Tom sorted me out with some lovely Arri HMIs to fit my ‘power budget’ perfectly: a pair of 575s, a pair of 1200s and a 2500w key. This kit would give me the flexibility to light from various positions without losing the obvious primary light source.

So I’m now just a hair over 6KW – and I have enough left to fire up our new improved DIY LED lights to flood a greenscreen if I need to!

I had the boys rig a rope system to mount the 2.5K just above the set beaming down through the grates in the ship. This gave me really strong, harsh columns of light that would tear across the deck of the ship as it rolled from left to right. This was such a bold lighting statement I decided to make a feature of it with a little bit of haze.

This haze would mix with the smoke from the cannon fire (yes they really fired!) to create a light so strong you could almost reach out and touch it. The haze would also help to scatter the light and help spread it around the inside of that dark box.

The other lights were positioned high and back to throw light in through the portholes on the sides and help backlight the talent and the wonderful production design.

The epic was much, much happier with this light level – allowing us to get down to 500-800 ISO and get a much cleaner, sexier image. 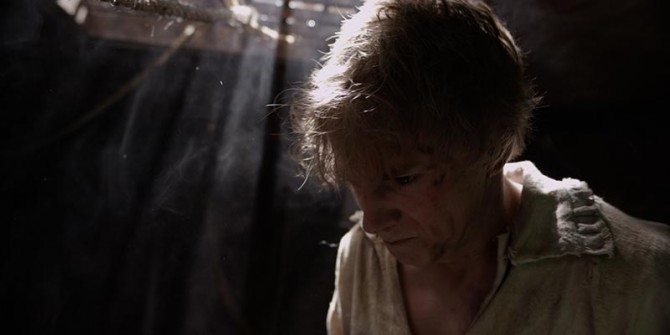 In order to make our young lead feel like a little mouse that was about to get trodden on, and in order to make our set feel even bigger I decided to shoot the entire piece on an 18mm Red Pro prime lens. Shooting this wide actually helped us expose, because it made a t/1.8 aperture acceptable for focus pulling.

Dave wanted a very panicked, hand held, Ridley Scott feel, which meant we needed a decent wireless follow focus. There was no way we were going to get a focus puller in the set along with all the scurvy sailors and firing cannons!

Pete Hoare at HocusProducts came to our rescue here with the prototype of his awesome new Axis focus system. This thing was such a joy to use we have since gone on to work with Pete to adapt his system for underwater use!

So there we have it, another shoot in the can. Then it was on to the really complicated stuff – lighting underwater!

If you want to find out some more about the project, or you just have a question, come down and see me and the rest of the team at our sneak preview and Q&A this Sunday at Raindance: http://tinyurl.com/cbmt8or

And don’t forget you can grab yourself a copy of my hour long lighting Masterclass on Vimeo:  https://vimeo.com/channels/evehazelton 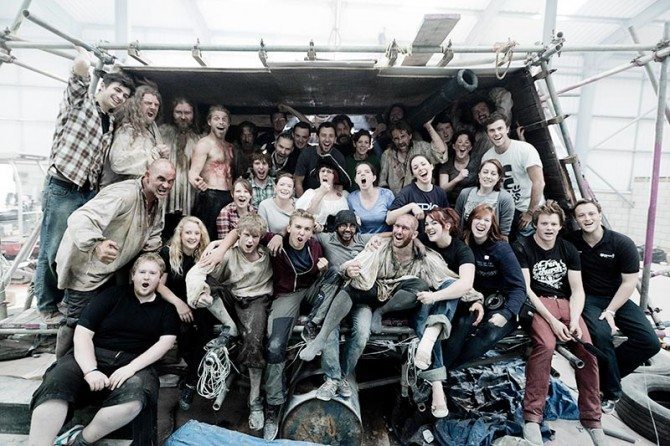 Photo credits go to the crew and Angus Young – http://www.production-stills.co.uk/