Colour Grading with LUT’s in Premiere

Philip here. Really useful post by James on this way of grading. The Lumetri on adjustment layers and filmconvert 2 is something I use a lot. Not on my grade of “Hiding Place” which you can see near the bottom. A much softer look which I achieved through filmconvert 2 with blackmagic film preset using the Velvia 100 stock, some blues in the shadows and minor colour correction on the clips to even out exposure. Sharpening was added too. Around 15-25 depending on the shot. Sometimes I use unsharp mask. Sometimes sharpen. All comes down to taste on each individual piece. With the use of warp stabilise on my version (very subtly I might add it does add a little bit of softness sometimes hence I used sharpen on this as it brought it back to how it was)

Update:
As an option I though it would be nice to show colour correcting from within Adobe Camera Raw. Of course this method works best with native raw/dng files but by exporting frames as Jpegs at Max (12) quality or Tiffs we can bring them into ACR in supported applications. I used Photoshop in this example. For reference and to keep it simple every shot was graded using this profile (link to download here – HidingPlace_ACR_Grade.xmp http://we.tl/KbamUsbFJj). All I did then was adjust white balance and exposure.

To begin I exported the sequence as Jpegs from Premiere I opened all 3,216 frames into ACR I then blanket graded with the profile and the adjusted shots in groups.

Once saved as frames I then imported as a sequence into Premiere and dropped that onto my existing timeline. Thus keeping all sync on audio or supers.

Once again I exported as ProRes Proxy to upload to Vimeo.

What you do get when working with a fake raw image sequence like Jpegs is a bug in ACR that ramps exposure. It’s slight be you do get some flicker sometimes. I don’t get this issue when using DNG’s so when licences are sorted an BMPCC does have Raw you should be good. I did doubled checked profile. crs:AutoExposure=”False” / crs:AutoShadows=”False” / crs:AutoBrightness=”False” / crs:AutoContrast=”False”.

Any way here is the result.

A quick colour grading guide to achieve what you see below. We do not cover any fancy masking or tracking in this demo, just the basics results you can hope for without leaving Premiere. Colour grading is all about personal taste. Really I have no care if the skins tones fall off and the sky is yellow. Just enjoy yourself.

Examples above show with and without grading. What you need: For Creative Cloud users these LUT’s can be found at: Adobe Photoshop CC/Presets/3DLUTs. They are loaded through Lumetri Looks in Premiere CC. Lumetri presets are again just LUT’s that can be loaded in. I just set with anyone of these and then load the desired LUT into that. Kodak 5205 Fuji 3510 (by Adobe).cube filmstock_50.3dl HorrorBlue.3DL Film Convert Pro – AE/PP plugin version 2 – http://www.filmconvert.com Adobe Premiere Pro CC – http://www.adobe.com/uk/products/premiere.html Photoshop CC (for the LUT’s) – http://www.adobe.com/uk/products/photoshop.html I have included the download of the Premiere CC grade edit to get you started download here: http://we.tl/aFxHRRI3sE You will have the correct LUT’s etc. So really you will need Photoshop too as that’s where the 3 LUT’s come from. You will also need to download Philips ‘Hiding Place’ film here. It’s Prores and cut into his original edit that was 2:35 in aspect. “This footage is for personal use only. No commercial use is permitted. Credit for Philip Bloom, Kate Loustau is required and if the music is used then The Music Bed Holly Maher “Hiding Place” is also required.” Thanks and enjoy playing with the footage! https://philipbloom.wetransfer.com/downloads/7b92c68d915ec31390b74928d833155c20130825094339/538f16f868ea27d2113cfbead26d263d20130825094339/31a2ad Please read ‘USAGE TERMS READ FIRST.rtf’ doc attached to download.

Getting Started: It’s Important to load adjust layers in the right order. Sometimes if you’re using too many adjustments, you may cut some weird clipping issues. In this example case of Philip’s ‘Hiding Place’, I started by marking the cuts as I was not working with the native edit. Although I still do lots of grading to locked down edits that have been supplied as Prores masters. It can speed things up if you have at least an XML to load of the cuts points. V1 contains the main ungraded track. 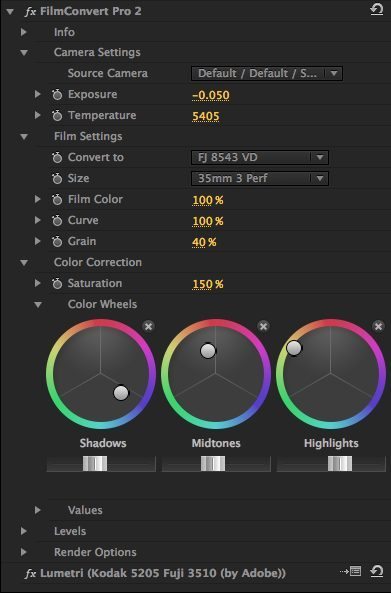 V5 contains RGB Curves. I pushed the blue highlight to give me yellow highlights and a tiny bit a blue shadows using the bottom left bezier point. Also I pushed the green shadows towards red by a touch. 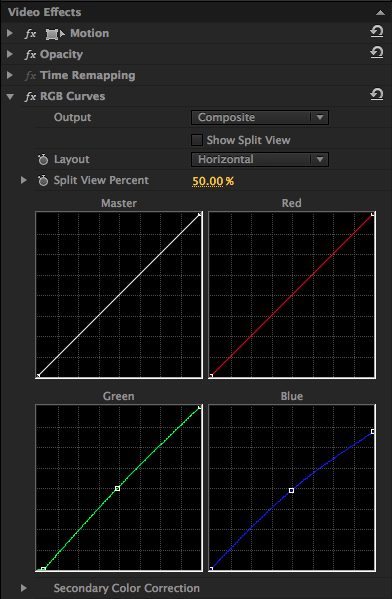 As with most clips, the amount of exposure changes so, using Film Convert, I adjust the Shadow/ Midtones / Highlights to suit. You find that under ‘Color Wheels’. Other Film Convert Pro 2 settings vary. But as a guide I used FJ 8543 VD, the grain is set at 40% using 35mm 3 perf and saturation at around 150%. The saturation is pushed, as the black magic footage is very low in saturation. Colour temperature is changed if I need to add warm in the morning or add blue in the evening shots.

Now to retain a little more film grain on your grade: Usually when using film grain for online (web) version delivery, it looks pretty good on the rendered h.264 version but that film grain will get lost on the next generation H.264 re-encoding loss on Vimeo or Youtube and your footage will look very poor. Even pushing the H.264 encoder unto 25Mbps does little to hold the grain. But unlike say using the Apple ProRes 422 (HQ) master transcode at 184 Mbps (at 25p) the 38 Mbps Apple ProRes 422 (Proxy) data rate is much more suitable for an online delivery format and Youtube & Vimeo can still manage to digest it. Of course 38Mbps still adds up fast, but if you need film grain to hold then this is the way to go. You are never going to get around the problem that it’s a transcode of a compressed output and due to this it will always show compression on Vimeo or Youtube. But it does help. More on Film Convert Pro here: http://philipbloom.net2013/08/16/filmconvert/