I have been in the US for about 2 and a half weeks doing all sorts of stuff. Re:Frame, Critics and then I went to LA to hang out for a few days. I went on location with “24” to meet DP Rodney Charters who was a smashing bloke. I also had a great meet up with over 30 people I knew mostly from just the net/ twitter etc and of course I did some filming.

My “people series” never set out to be series. I did one in Sofia, then did a sort of homage to that in Dublin with a pre-production 7D. Whilst in San Francisco I did ANOTHER one which I was very pleased with. Now I wanted to do one in Venice Beach in LA but wanted to mix it up a bit. So instead of the usual posing I took a more documentary approach to the subject. Still mostly focusing on interesting characters rather than the glamour…I used a lot of sync and all of it was capture using the simple RODE Video Mic. You can hear the AGC but the sound is surprisingly good. Downside of RODE is you cannot take stills using viewfinder as it gets in the way. Check out the lifeguard section, that sound was all recorded at the distance shown in the big wide shot. Not bad for a camera mic…

Essential piece of kit was the Vari ND/ Fader ND. I used these a lot in Delhi for the Greenpeace shoot and anytime I shoot during the daytime. They let me adjust the amount of light coming in between 2 and 8 stops so I was able to get nice shallow depth of field but stay at 1/50 to keep my shutter as close 180 degrees as possible with 7D in 24p mode. This shutter speed gives you the most accurate film motion.

I also used a baby Cinesaddle for the static shots. Very useful piece of gear. Have one for my massive broadcast cameras and this one for the small cam stuff.

Big thanks go out to Sara Collaton for inspiring me and her great BTS photos and to “New York”, the featured homeless man.

Graded with Magic Bullet Looks. 20% off with code Bloom 20 at checkout.

Click on the image below to see the film and I REALLY recommend download the FULL HD version from Vimeo by going to the Vimeo page, signing in and click on download original. I watched it on my 47″ LCD screen via my XBOX 360 and it looked beautiful. 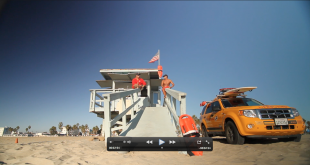