A review of the DSLR rigs from Zacuto

As with my recent review of the new Z-Finders it is very important in the interest of honesty that you are aware that I have a relationship with Zacuto, both as friends and as an affiliate. But, as I say in my ethics statement I only take banners from products I completely endorse. There is nothing on this site that I don’t use day in day out… as the moment I recommend gear that sucks there goes any credibility that I had. Of course not everyone will agree with my opinion, as like all reviews, this is my opinion. I am sure many of you prefer other rigs and am sure they are great. I simply bought a massive Zacuto Rig 3 years ago and have never looked back. I bought cheap variations which were naff, I then bit the bullet and used my credit card and I do not regret it in the least! Their lifetime warranty is what sealed it for me, anything goes wrong, even accidental damage and they will swap it out, forever!

With the introduction of DSLRs that shoot video Zacuto have held centre stage with their Z-Finder, the absolute number one accessory for the DSLR, but also their rigs are indispensable.

At NAB they introduced a whole new line of “Gorilla Rigs” and “Cinema Rigs”, I haven’t played around much with the new Cinema rigs apart from the Crossfire, but that is essentially the Striker pimped up. All the ones with counter balances I haven’t played with apart from at NAB, but if your budget can afford it (they are not cheap) but you are shooting NON-STOP handheld, this is the way to go, especially if you are using Matte Boxes etc.

There are two main “Gorilla Rigs” down one from the last lot. We used to have the Rapid Fire, Quick Draw and Tactical Shooter. I hated the Quick Draw as it didn’t have a butt, they have dropped it thankfully so we now have the Target Shooter and Striker.

The Target Shooter is essentially the Rapid Fire which was the one I generally suggested to people to get. It’s the cheapest one and works really well. The Butt of it goes where a rifle butt would go giving you one point of contact, the Z-Finder gave you two then two hands on the camera gave you two more. Four points of contact. It’s also really lightweight, simple and works a treat and  like all Zacuto gear build up from it. The new Target Shooter is different as they removed the Manfrotto QR plate as they have their new plate which simply slides onto the pole and is quick released from that. You can attach your tripod QR plate onto the bottom of the Zacuto plate so it’s still easy to go onto a tripod or slider etc…just less plates are used. Before if was Manfrotto plate then onto the other half of your manfrotto plate onto your QR plate of your tripod. They have simply taken a step away making it more rigid. Other than that the Target Shooter isn’t drastically different and is still the one I recommend for those starting out, it’s the one I used to use all the time. That has changed recently. But until then it was always this one.

It really is very simple but it makes a huge difference to stability and is very adjustable to all sorts of body types. Something some other non Z rigs aren’t.

Next up is the STRIKER! The rebadged tactical shooter. The different between this and the Target shooter (these names are confusing) is you have an extra handle for your right hand to grip. This give you extra stability for those longer handheld shots. It does make a difference. This is what I would call the pro Gorilla Kit. Because your hand is on the handle you can use this in conjunction with the Switronic flex remote (also available from Zacuto) to let you start and stop recording without letting go of the handle.

It’s a great kit and they haven’t changed much apart from the new baseplate. 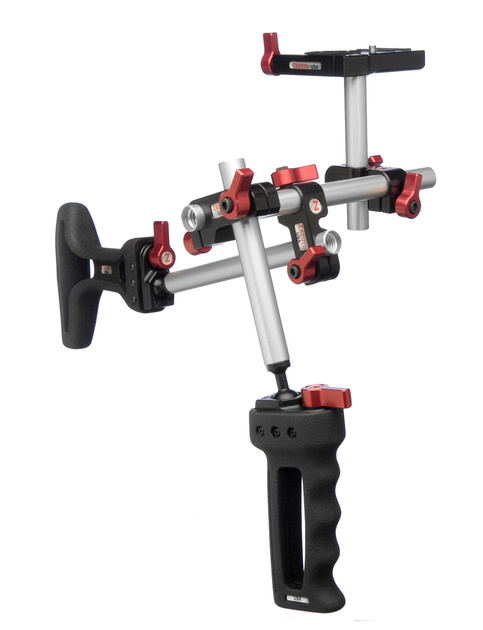 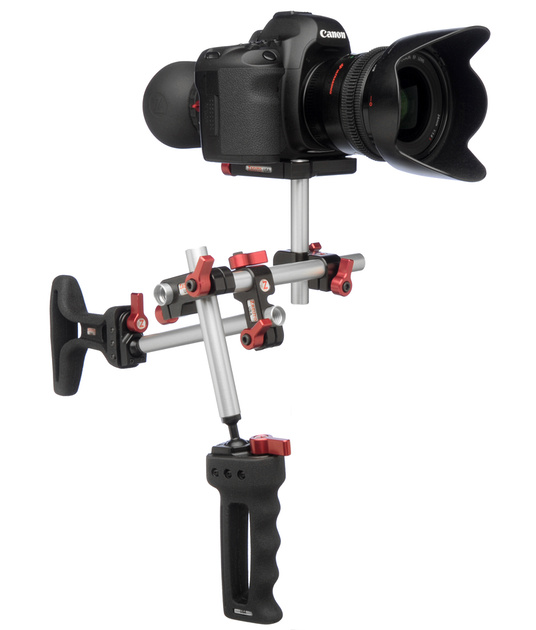 This is where it gets REALLY cool for me, they have brought out something called the “Single Action”, it’s essentially mini rails for the Striker than adds a follow focus. This can be used on the tripod too but the joy is using it handheld with the Striker. Stick these together and they become the “Cross Fire”, easily my favourite rig from Zacuto ever. If you need follow focus on your handheld gorilla rig this is it. I find it really comfortable to use and very adjustable (all these rigs work with all the DSLRs by the way). It’s what I take everywhere with me and if you saw me at either the Phoenix meet up, NY meet up or Converge 2 then this is what I had. It’s what I will be using on all my handheld jobs. I love it and the way it easily comes off with a tweak of the below red know and the camera comes free! I love the big counterweight ones too but they are big, heavy and ruin the compactness of the DSLR rig for me. If I was shooting a handheld movie I would without doubt use the Cinema rigs, but for all my doco work and personal projects then this is the one I choose. 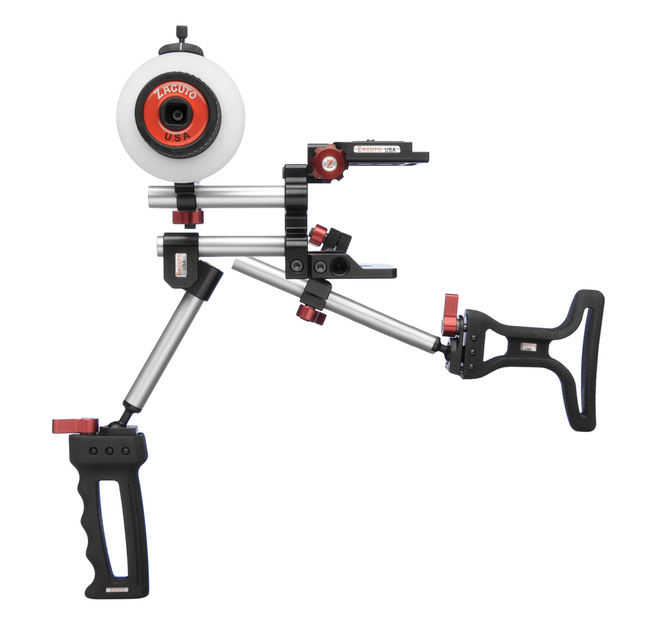 I recently got the Petroff Matte Box as picture here. It’s my new favourite matte box. SUPER strong, two 4×4 trays, really well made and affordable but this is key…REALLY light! Also check out the new DSLR handle which makes carrying these rigs a lot easier and works great for low angle shots. 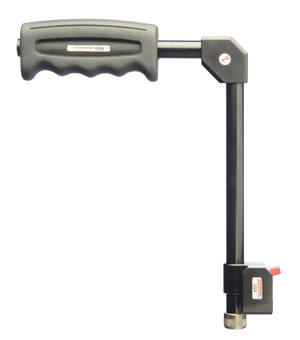 Here are the new Cinema Rigs. These are the top end of the Zacuto line, so not for the budget conscious. They really are worth it for high end projects, but if you are on a budget…Stick to the basic one and then move up. The cool thing is with Zacuto, you don’t like it after getting it delivered, send it back. They have the world’s best customer service. Nothing to lose really!

With the removal of the old DSLR plate and the addition of this single action it makes the rig much lighter and works a lot better. 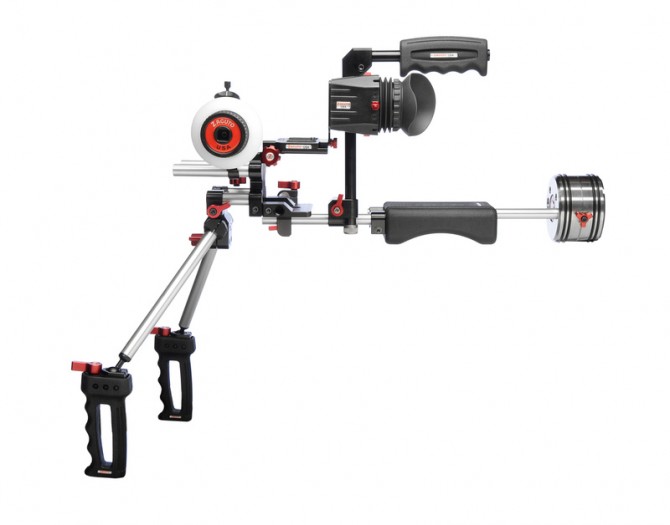 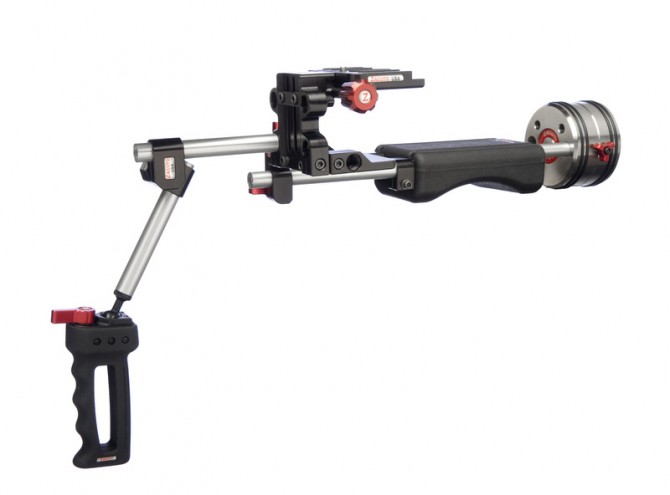