I have recently developed a close relationship with Kessler Crane, mainly as they are great guys with great products who have been working with me on what they need to do to make their sliders better.

Part of the issue with most sliders I have used in the past, including the glidetrack and the old pocket dolly is they used the IGUS system which while great was never perfect. It can stick so you often have to repeat the shot to get it smooth. Although their pocket dolly with crank improved things so much making this stickiness not happen. To improve performance  Kessler have gone to a system similar to what they have in their top of the range Cineslider system. They are using a ball bearing system, coupled with the belt to give it inertia, it creates a smooth as a baby’s bottom slider that is now what I call a one take slider. The only time you need to do the shot again is if you screw up rather than the slider sticking. The other cool thing is it’s silent. I have used all the sliders I can think off and the problem with most of them is they simply are not quiet, making recording sound a real issue. This is the first smooth slider I have used that is silent.

It comes in two lengths, the traveller and the normal size. The thing I love about the traveller is it packs into my suitcase. A big plus. Although I of course prefer the longer version for more flexibility so if you don’t live out of a suitcase like me that is the one to get!

I know without a doubt some people will complain that they have brought out an improved version if they have bought v1, but that is nature of gear. Improvements are always being made and I would rather companies bring them out than sit on them for a year because they don’t want people to be upset that they have something not as good…the v1 is still great…kessler are just always striving to make improvements, like Zacuto. That should be applauded not complained about.

Below is a timelapse film I made from the set of Lucasfilm’s new movie “Red Tails”. All the motorised shots were done with a prototype Traveller version of the V2 pocket dolly and the Elektra Drive system with the 500 motor and Oracle Controller.

This is the joy of the Pocket Dolly V2 system. It’s the baby brother of the Cineslider, the gold standard of sliders which can take heavier cameras, but it performs as smoothy and that is key. This really is the smoothest slider I have ever used, combined with the flexibility of using “manually” or motorises with the Elektra drive system to create a motion controlled slider for both timelapse and normal video use makes this for me the best on the market by far. That is why I have developed a close relationship with them and we will be working even closer in the future to make great products.

Don’t forget, if anyone can make the Key West meet up on the 29th June, Eric Kessler will be there with the toys as will I and Tom Guilmette. It’s going to be a shooting meet up. It will be a blast!

You can order from Kessler Crane by clicking on the banner below. 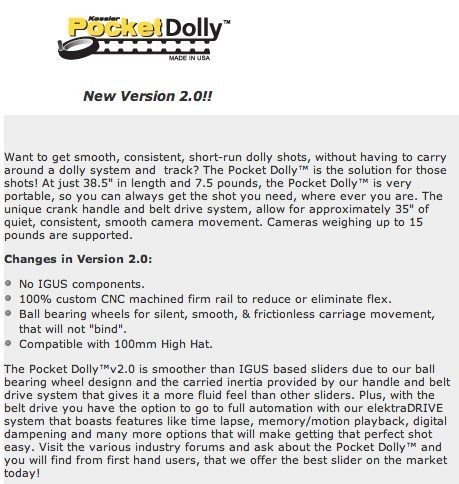