Keeping up with the traffic… 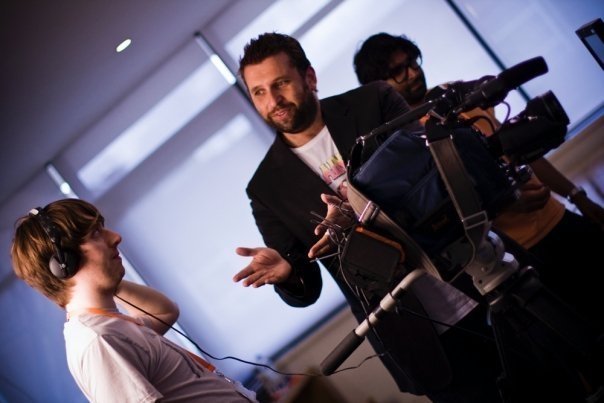 It’s been a while since I wrote something personal on my “personal blog”. It generally is a place for silliness or deep thought. Good mix eh?

My site has been going since I went freelance back in October 2006, it was a very simple iweb site just to showcase some of my work. Just over a year later in November 2007 I started the blog when I got the Sony EX1. Since then it has steadily grown with my use of 35mm adaptors in particular the Letus line.

With the blog I started doing more personal short films and sharing my experiences of shooting them. It also slowly became a resource for people to learn about low budget filmmaking. Totally accidental, just an offshoot of my love of sharing everything. I am really pleased this has happened as it has made the site what it is today. Sure, I could have a simple site which just shows of my work but I am very proud of what the site has become.

Big thanks must go out to Piotr Godek of Odd Web Things who came to me with the idea of turning my iweb site into a proper WordPress site. We are now on Version 2 of that and the work he has done on it is wonderful. I think it is a big improvement over V1 and much easier to read, navigate and use.

But of course huge thanks must go to all the people who visit every day and have turned a place to showcase my work so I can earn money into pretty much a community. I know many of you from emails, comments and of course twitter (if you aren’t on twitter get on it and half the info I give out and half the silly nonsense I write is via twitter, check out the link on the top right.)

Without all the people who read the site, write to me, make comments I would not have anywhere near the motivation to keep it going like it is. Currently it takes a good 3 hours a day + to run my site and answer emails, maybe longer some days. It’s a labour of love which it needs to be as my day job is what earns me money so I do that during the day and the site in the evening. It doesn’t leave much time for anything else! At some point I will need to get some help running it, maybe guest blog posts and the like. It has been suggested many times that I get a ghost writer for emails and the like and that will never happen. What’s the point? If it isn’t me writing back then why bother writing to me in the first place?

Sometimes it is of course a struggle to keep it going, especially when I am really busy. So you may find I don’t answer your email. If that happens am sorry but it does get to the point very often when I wake up to 300 or so new emails and to go through them all is tough and sometimes I miss some and if I do, then try emailing again or maybe do a search on the site as much is already answered on previous blogs. Just a little bit of searching on my site can help with my workload!

I also want to keep the blog itself as varied as possible. Talking about new work of mine, new products I have come across, events, my own training products. I hope to get my hands on the 1DmkIV soon and the new PMW350 and EX1-R from Sony. I have a review of the Nanoflash coming up as well as loads of other products. Very soon will be my reviews of the Lumix GF1 and the Canon 500d…better late than never? I will start blogging about more random unrelated stuff on the personal blog. Feel free to ignore it. Also do check out my Facebook “fan” page…wanky name fan page I know, but that is what Facebook call it!

I don’t have to talk about this but I feel it is very important to set out what’s what in “black and grey” about exactly what do I make from this site? I get a lot of satisfaction out of the site that is for sure, and I mean it. When people write to me saying how much they enjoy my site it makes my day. But financially…very little. What I do get is work of course, people get to see my work and recommend me and I often get my employment that way so that is of course great for me. I also am an affiliate of Magic Bullet (20% off with code BLOOM20!!!) and have been for a while now. I have just signed up finally to be an affiliate of Zacuto. Despite all this huge promoting of them through critics, filmfellas etc I have done the promoting of their products because I think they are awesome. Being the world’s worst businessman it took Steve Weiss himself to force me to become an affiliate and despite this it still took me many months to get around to doing it! As I said…world’s worst businessman!

Being totally honest now, as an affiliate it is of course in my best interests to talk about Zacuto products. But it won’t be anymore that I did before when I was not getting any money from it and I only promote stuff I think is terrific. If it isn’t then you won’t see my talking it up. So if Zacuto ever start making a pile of crap then I guarantee you I won’t be recommending it anymore, not that I can see that happening! Steve himself has become a very close friend of mine since we started Filmfellas and Critics. Mixing business and friendship is always hard but as what Steve and Zacuto do is the best and I think Steve is a truly great guy, despite being a pansy. Very few owners of companies write to their customers personally and gets so involved. It’s this personal touch and unbeatable customer service service that make me being an affiliate of Zacuto a no brainer.

I have also started an Amazon affiliate store under my Recommended gear page, another way to try and earn some extra money from the site. It lists gear I use and if you buy from it I make a small commission…but it does serve as an information source too. Read what I use and why see it on Amazon and if you want to go buy from somewhere else because it’s cheaper then go ahead! If it can save you money then am totally cool with that! You may also have noticed the appearance of B&H photo video ads here and elsewhere. Am now also an affiliate with them, so please support my site and click on one of my links before buying something there.

The thing is the site has become a victim of it’s success, especially this year. My hits have gone up enormously since I started talking about and using Video DSLRs and I have now had to go to an expensive dedicated server and of course spend a lot more time answering questions. So these affiliate programs are a way of me being able to keep the site running in it’s current form.

Of course another downside of the success are the number of trolls I get, not just on this site but on the forums and Vimeo. I sort of put up with it. But like many creative people I am very passionate and sensitive about my work so if someone is just plain nasty then I just delete or if I am being really stupid, reply…never a good idea. So yes you may say there is censorship on this site and as this is my site I will continue to delete unnecessary comments. Sorry, it you want a place to rant then start your own blog, don’t use mine for your rants! I tried letting everything get published straight away but it didn’t work so now I have to approve everything, sometimes this can take a few days to do. Of course I expected this…I have put myself out there so people will make me a target. An unfortunate side effect and one I will need to learn to put up with. Just don’t expect me to like it!

But getting back to more positive stuff. F-Stop Academy, due to my crazy work schedule, the diversion of the 7D and 5DmkII DVDs and red tape will finally be launching properly soon. Very exciting times. Sorry for delay, we just had no idea of the reaction it would get so it’s been rather overwhelming and we want to be 100% sure everything is rock solid for launch day.

I will continue to remain as impartial as ever. Being an affiliate of Magic Bullet doesn’t stop me saying Color is great! So being an affiliate won’t stop me talking about other competitive products. I will soon be reviewing the new D-Focus from Jag35 and even the LCDVF, the viewfinder for DSLRS that wallops the Hoodman between the eyes and is snipping at the feet of the Z-Finder…what is it like? Stay tuned as a review will be coming soon and when I do any review of a product that could be a conflict of interests due to me being affiliates with certain companies then I will state so at the beginning of it. Also if I am given anything to review (which I rarely am) then again I will state so in the beginning of the review. Just by someone giving me a piece of gear to review will in now way mean they will get a glowing recommendation. What is the point? If I recommend something that sucks then I will be eaten alive by you lot!

Once again, thanks for frequenting my site, reading my blogs and in particular this one and I hope I can help out as many people in the coming years as is possible. Whenever I go somewhere abroad I try to meet up with as many readers as possible so please keep an eye out for those meet ups and I really hope to put as many faces to names as possible!

Oh and you can hear me speak and many more talented people at Converge-One in London on 12th December at the amazing BFI. Please come!