Final Cut X is out, as is new version of Motion

Prepare for a very schizophrenic post here! This has been written in a linear time frame from downloading it to my thoughts as I use it. I contradict myself from things I said earlier later in the post. The reason I have left the post like this as it will read like you have done what I have just done so when you do download it (if you do then this is your comfort blanket in that you were not alone!) So enjoy the ride!

Let me know how you get on with them in comments below.

As I am currently learning CS5.5 I guess I will be learning two new editing systems concurrently. CS5.5 just required me to adjust my thinking to a slightly different way. FCP X is something totally different. Only time will tell if it is good or bad!

CS5.5 is mind blowingly good! The link with After Effects is terrific. FCP X is a different beast at a different price point but is replacing Final Cut 7 which has been my editing platform of choice for 5 years.

You can have both X and Pro 7 installed on the same computer, just not open at the same time. This is great which does make the whole jumping to FCP X not the jumping without a parachute which it could be. Don’t like it? Does not do what you want then run FCP 7 until it does.

You cannot open old FCP projects in it, although you can import imovie projects! Eek! None of my plugs work too…

Personally I would hold off for a little bit until myself and others have given it the once over. It’s always best to let others try things first, especially version 1 of anything and certainly from first impressions it has a lot missing that is needed! So don’t rush to buy it just yet!! Read my short blog post and check out some other reviews…

If you cannot wait (like me!) and want to take the plunge then you can support my site by clicking on the itunes affiliate links below to download them. It doesn’t cost you anymore but I get a teeny weeny percentage. I will be sharing my journey with the software with you on this blog post…

It looks revolutionary (as in unrecognisable!)…a totally different interface and a lot of things to make your life easier like background rendering. Let’s see how well it does these things in practice! 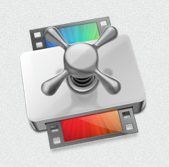 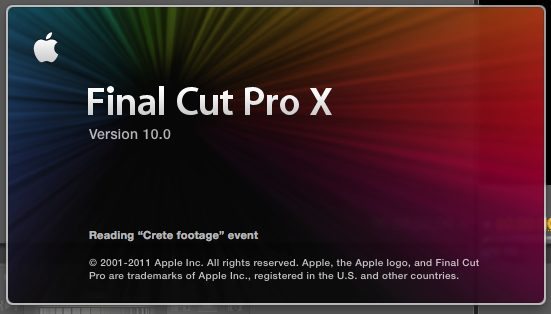 It’s installed. Opening it up. First thing to greet me was this…. 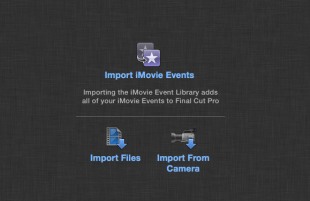 Now I am trying to work out where my scratch disk is. Honestly I think if you know how to edit on iMovie, and am not saying this for effect, you will instantly know how to run this whereas for me I am scratching my head still as to where all the settings are…I am sure I will work it out soon!

I like a lot of the things I have seen like match colour, magnetic timeline, organisation and the speed. The preview window is interesting, thumbnails not so good but clip on list view and it’s better. It really does feel like learning something from scratch rather than adjusting to a new system like I have with CS5.5.

DSLR editing is a lot easier as it can cope just fine with H264. Probably best in the long run to still transcode out of it for certain projects but the ability to edit DSLR footage natively is a big plus.

It has some awful imovie style built in effects but then again FCP also had some hideous transitions we ignored, these are just more in your face! It seems they have added a huge number of things from the consumer editing program into this. I don’t need fake night vision binoculars. Well I don’t think I do!

I don’t want to be a complainer as I actually do like a lot that it does, it’s just that it is not there yet.

After playing with it for a while, I like the interface, it’s bold and new. Although a steep learning curve from other NLEs. The problem is it is just lacking in so many things that I need. I completely understand that this is version 1 but I need it to do simple things FCP 7 did. Currently it does not and for me that makes it not an option for editing paid jobs with right now. I am certainly not writing it off just yet. CS5.5, which I have just started learning, seems the smart choice or stick with FCP 7 for the time being!  I love AVID MC too but the flexibility of CS5.5 with it’s other apps is nigh on impossible to beat right now. FCPX is not ready for prime time just yet, in my opinion. Until we get support for multi cam, third party plug ins, third party codecs (EDIT: a pro apps update has just fixed this), no output from my Aja Kona, no EDL, no XML, no ability to use tape, no copy and paste attributes, no multiple timelines per project and SO much more then this is not a professional tool right now. Let’s see how the next few months work out.

To sum up, FCP X is an ingenious fast piece of software that is going to upset just about every editor out there used to final cut pro!  BUT is probably going to appeal massively to new editors without previous NLE experience, they will love it I am sure. It has incredible organisational features and lots of other things that will take a lot of the pain of editing away, with a bit more time with it I am sure I am going to love what it offers. It reminds me of when OS X came out, although not as extreme. It was a massive evolutionary step forward from OS 9. It was not until 10.1 came out that the potential of OS X was realised.

I am a HUGE advocate of tapeless workflow and FCP X is built to be tapeless with limited support for tape but the broadcast industry is not as pro tapeless as you think! The majority still use tape and just about everything is mastered to HDCAM SR tape!

Sometimes we have to throw out what is there to make things better. But, let’s hope the stuff that has been thrown out is temporary. If not, Apple no longer has a broadcast (note the key word here, broadcast) tool and all the people and companies I know who use FCP 7 as their broadcast standard will have to look to the future as to just how long will FCP 7  be supported before they are forced to upgrade, at which point they could just simply jump ship.  I for one am having faith in Apple in giving us the essential Pro features with an update. EDIT: But this blog post from FCP Guru Larry Jordan gives me doubts.

It has a lot going for it and the fact that FCP 7 remains intact on your hard drive is a massive plus. This alone makes the transition, or even just trying it out a possibility. Before that upgrading was a terrifying prospect.

For a detailed look at the software check out Kenstone.net and Steve’s Martin’s article. There is also a great run through of many questions you want answered on Philip Hodgett’s website. Very useful, 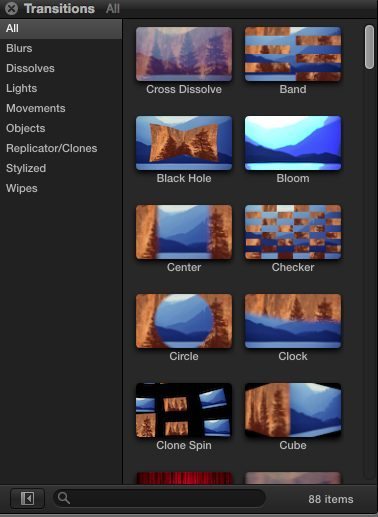