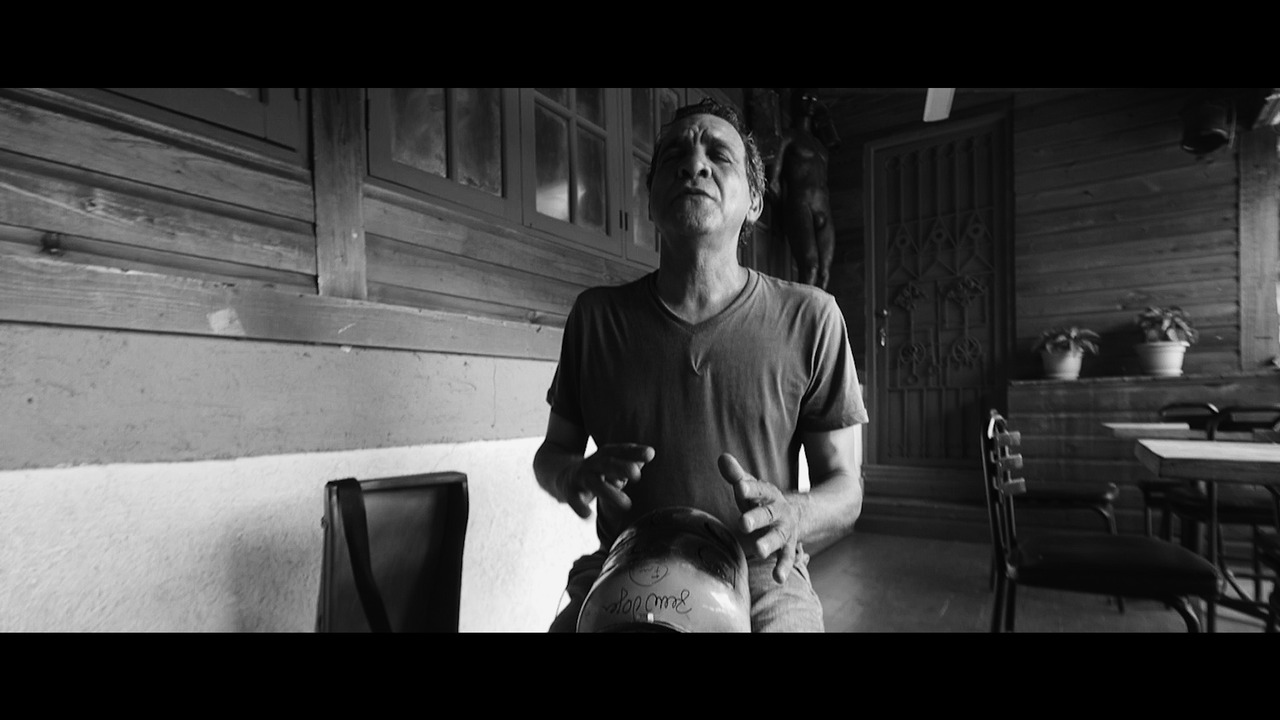 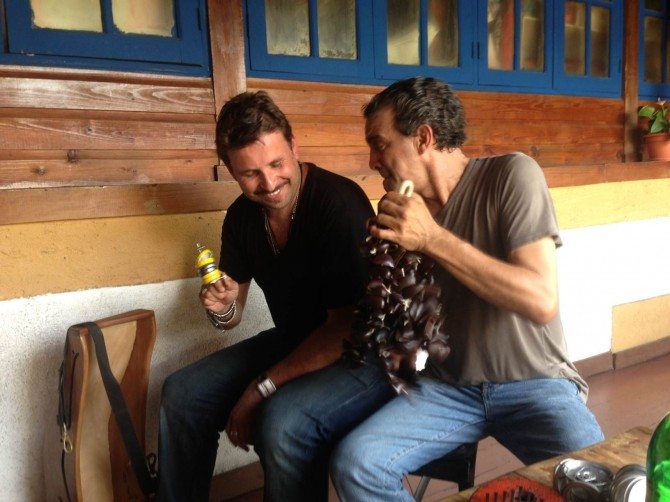 Whilst in South Africa doing a series of workshop, I made 4 mini docs, which you can see here: Ponte Tower, Portrait of a projectionist, the salt water drinkers and the tracker and the banker. These were not commissioned films. There were done for myself and for the pleasure that I take in telling stories. I am a huge advocate of shooting for yourself when you can. It gives you incredible creative freedom which paid work often doesn’t give you, and for me on these workshops gigs I need to make sure I shoot whilst on them, as filming is so important to me. I love to teach. I love shooting more!

I recently did a week-long workshop gig in the Dominican Republic. My first time there. Unfortunately I didn’t have a chance to see anything of the Island, but I did have an afternoon off, so I had to shoot a mini doc in that time.

Finding the right subject and right story was key. Nothing too obvious but something very much Dominican. The stories I like to tell are about people, people with stories, interesting stories. A number of potential ideas were floated to me, but like in South Africa, the story needs to click with me before I commit to something. In South Africa, two of the mini docs subjects were literally decided upon right before I shot them. How do you know? Well, a lot of it comes down to my experience, but a lot of it will come down to your reaction when you hear the story told to you. Are you actually interested in it? Do you want to know more? Do you want to see a film about it? Can you tell the story? If the answer is yes then you have your subject.

Christian Balbuena, one of the organsiers of my workshop there, told me about Felle Vega. A percussionist who makes his own instruments out of whatever he thinks could sound good and actually made the first ever Dominican instrument, the Boombakini. A form of drum made of wood, patented by Felle, which is capable of wonderful different tones and rhythms.

Now Felle is not an undiscovered man, he is well known, but whilst looking online at stuff about him I couldn’t find anything that really grabbed me or told me who exactly he was and what drove him. So Felle was going to be my story, and I was lucky enough to meet him the day before which sealed the deal. A wonderful man with an incredible spirit. I needed to capture this.

I would have around 2 hours with Felle, as I had commitments until 1pm and he needed to rehearse for a play he was doing musical accompaniment for around 3. So not a lot of time. Pretty normal for me! So my set up and plan were very simple. I had to find one place to set up, no moving around..Not enough time. And I had to use as much natural light as possible.

The venue we had was the Casa Del Teatro. There was a nice outdoor space, but with it being 1pm a terrible idea to be out in the sun, due to awful top down light. So I found a spot in the shade but still with light….enough for a main key and with my reflector as a bit of fill.

I shot with two cameras simultaneously. Quite rare for me. I like to have one camera at a time to concentrate on as I’m shooting and directing. I had two cameras with me on this trip. No C300, no Blackmagic, no FS700. Just DSLRs. My favourite, the 1DX, and the 5Dmk3. I used the 1DX as a locked off-wide on my Miller DS20 tripod with a 16-35mm Canon set to 16mm and used the 5Dmk3 as the main camera with a 24-105mm F4 IS using a simple Zacuto Target Shooter and Z-Finder. A lovely simple set up and a favourite of mine. It’s Zacuto’s simplest DSLR rig and still my favoruite for any non EVF shooting. Simple and lightweight.

So why the 1DX as locked off and why the mk3 as main? The 1DX image is without doubt way nicer in video. I love it. I have shot one music video and two mini docs with it. The image is just the best DSLR image I have ever seen and one of the nicest digital images I have seen, too. It’s also sharper. That is why it was the wide locked off. Better for detail. The 5D3 was going to be completely handheld (lighter too, so better for me!) and generally pretty tight so shallow-ish DOF (it cannot be wider open than F4, but I love that lens, nice full frame range and the IS is essential and F4 is shallow enough for this sort of thing) would look great on it, it just would need sharpening to match the 1DX…in fact in post I sharpened the 1DX by 8% in CS6 Premiere and the 5D3 to 30% to match! Quite a difference. The mk3 does sharpen up really nicely!

Sound was again done on my lovely Roland R26 with the Rode NTG2  (I prefer the NTG3 but phantom power and AA powered recorders like this don’t work well together, too many batteries are used up). There was also a condenser mic inside the gas cylinder instrument and Felle had the Sanken Cos 11 lav mic on him. With only two inputs on the Roland, when the gas cylinder was used the NTG2 was unplugged as it was not needed. Raul, who was my guide in this country, operated the Roland so thanks to him! The 1DX was pretty much just locked off the whole time.

I moved around a lot on the mk3 for the interviews and performance shots. Sometimes Felle had a much more front-on key, which really brought out his amazing eyes, and other times I was much more side on, more dramatic but less connection to him as his eyes were not lit up. I preferred the side light for the performance shots and the front on light for the interview, but before and after performance I threw questions at him, so hence there will parts of him explaining stuff on camera in the film which are more side on. 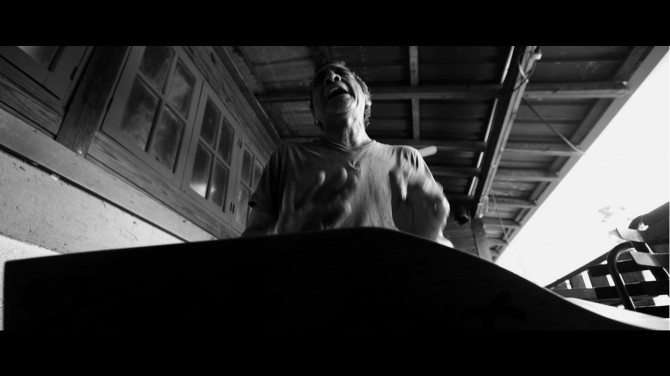 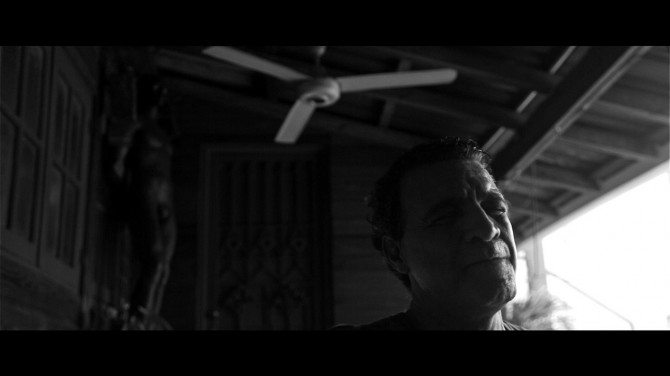 Basically Felle and I chatted and I filmed it. That is how I like to do these things. I got him to look at the camera as it’s nice and intimate and also as I was looking into a z-finder, so not much choice!!

We talked about life, music…loads of stuff. He gave me so much wonderful inspiring material that editing it was tough. Finding the right balance between music and his life. Of course, with his music underneath the whole thing. When I knew I had enough content from him, I stopped asking questions! With no voice in it other than him, you need make sure his answers can tell the story…it can be tricky but it comes with practice

I coloured this all in the wonderful Colorista II. Why black and white? It just felt right, that’s all and of course I think it worked great. The light was already quite contrasty, so it was already in my head whilst shooting this that this would be style of choice.  20% off all magic bullet products with the code bloom20 as detailed in the banner below.

The edit was at times quite fast and frenetic and at times more slow and deliberate. It depended on the style and feel of what he was saying at the time and the music. All cut native within Adobe Premiere CS6.

If you have anymore questions about this piece on why I did certain things, do ask below. I am always super keen to explain the creative thought process!

This is now my 3rd in my “Portrait” series after Boxer and Projectionist. I plan to do many more!

Portrait of a Percussionist from Philip Bloom on Vimeo.