Support my fight to beat prostate cancer via my Movember moustache growing by donating  PLEASE. Also check out some of awesome films made by my team!

This morning I was actually in the country (England) for the launch of the 3 new cameras from Sony, the high end HDCAM SR S35mm Camcorder the SRW-9000PL, the EX1-esque but with S35 chip the F3 and the prototype surprise announcement of another S35 camera the yet unnamed AVCHD NXCAM.

We got to see footage from the first two cameras and they looked gorgeous.

The camera I was mostly interested in, at first, is the new Sony F3 which I talked about on an earlier post here. It’s SXS based with a dedicate EXMOR S35 sensor and is rated at ISO 800. Really impressive. The images looked awesome although they were using Zeiss Superspeeds and recording via HD-SDI out to HDCAM SR. I would love to have seen the actual footage from the SXS. The thing is the camera is an EX1 in a lot of it’s functions. Even the menus look the same (a good thing!) It records at 4:2:0 35mb/s shoots the 24p/25p/30p at full hd, 720 50p and 60p and overcranks and undercranks in 720p mode from 1fps to 60fps. Oh, it also shoots interlaced if you want that!

Now XDCAM EX format is awesome, I bought and EX1 as soon as it came out and now have an EX3. I have used it for countless projects, both with and without 35mm. Always rated it. You see, I am not into numbers. Yes, the less compression is better but 35mb/s has always looked amazing to me from my EX cameras but the big HD broadcasters insist on 50mb/s 4:2:2 for full acquisition despite the 35mb/s being awesome. This camera does not do this. It CAN though using the uncompressed 10 bit out of the HD-SDI, the guys who made the demo film recorded to HD-CAM SR, but you don’t have to go so expensive. A Convergent Design Nano-Fash or Ki-Pro mini will do an excellent job. It is such a shame though that the camera does not have the 4:2:2 50mb/s out of the box. It would be so much easier…I like less wires and less cumbersome rigs and that is not even getting into the extra costs. Bill Drummond from Sony explains why in my video below.

Interviews are with Rick Young from MacVideo.TV, fellow Movember team member Paul Joy from Pauljoy.com, Philip Johnston from HDWarrior.co.uk, Bill Drummond from Sony and the designer of the new NXCAM! Oh and that thumbnail is me using and EX1 and Letus Extreme on Drama shoot The Somme, silly hat and all!! Shot the video blog on my lovely point and shoot Canon S95. You gotta love it…available on my Amazon store!

The below short was directed by Martin Scanlan and DP’d by Steve Lawes who shot the amazing BBC series Sherlock. If you have not seen it, then watch it. It’s amazing and a visual feast.

There are two versions. The first is the ungraded XDCAM 4:2:0 35mb/s off-line then the graded HDCAM SR version. Do read Martin’s blog about it. Great read!

Convergence – The Offline from Martin Scanlan on Vimeo.

Another teaser for a short shot on the F3 by Jason Wingrove.

The NXCAM looks very interesting, although just a prototype box with a lens and little info so far it has great potential. It’s AVCHD so 24mb/s and the REALLY cool thing is it has EXACTLY the same S35 EXMOR sensor as it’s big brother the F3. Not a crappy DSLR sensor scaled down to HD like the consumer version out right now this is a dedicated 1920×1080 S35 sensor, not APS-C, large pixels, meaning great in low light, ISO 800 rated. no moire, no aliasing, minimal rolling shutter. A rough release price of ¢6000 but that could change and no idea if it includes a lens. It is the E mount system and can take Alpha lenses too (and am sure every other lens with an adaptor). One issue I picked up on straight away when talking to Sony is the EU version will be 1920×1080 25p and also 1920x1080p 50 which was very surprising, this may be a mistake but if it is not it records at a higher frame rate than the F3 for less money, but not overcrank, 50p so it’s cinema tools to slow it down BUT to get 24p and 60p you need to buy the US version. It currently is not switchable, or currently not planned to be switchable. I told them it’s absolutely essential for it to be. As someone who like many people work in different countries having a world camera is essential. I do not want my camera tied to a region. I am certainly not going to buy two cameras to get 24p and 25p. Hopefully they will listen.

Sony promised to let me have the F3 for a day or two soon-ish, I will chase them for this as for me there is no better test than going out and shooting with it. I would also shoot on SxS to check out the quality!

The biggest thing I wish they had done was base the design on the EX3 rather than the EX1. That EX3 viewfinder is awesome and ergonomics are less hideous. Such a shame! 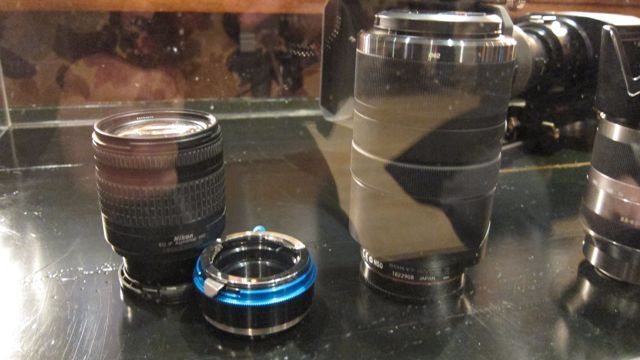 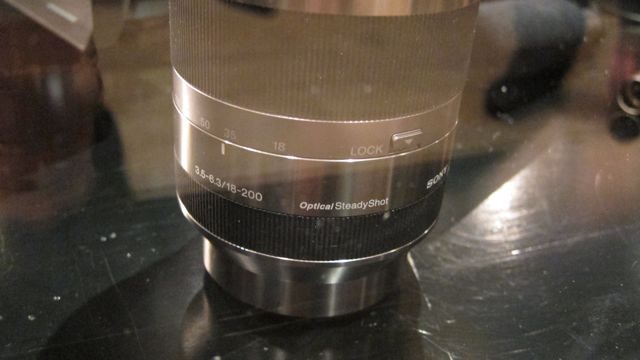 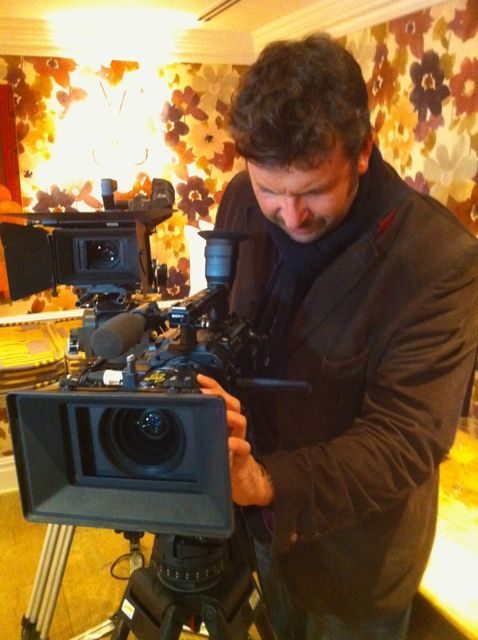 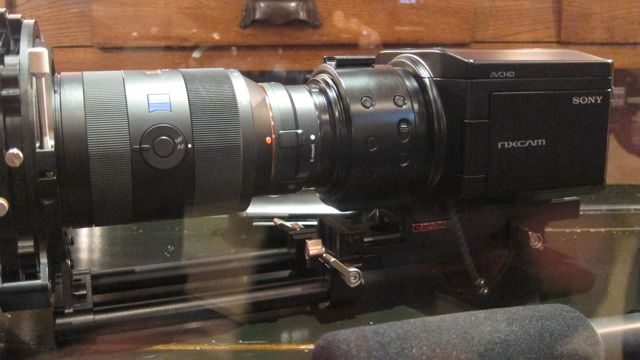 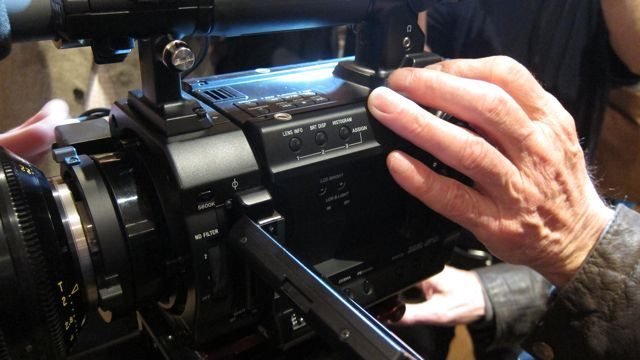 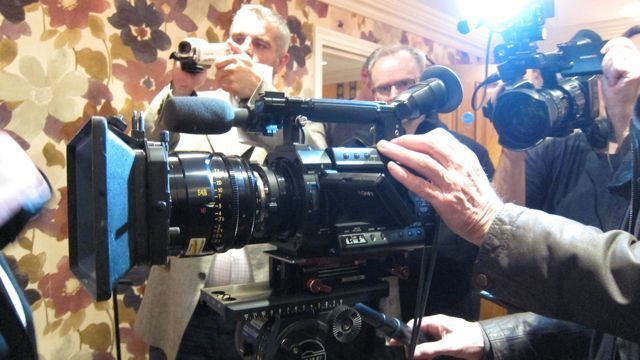 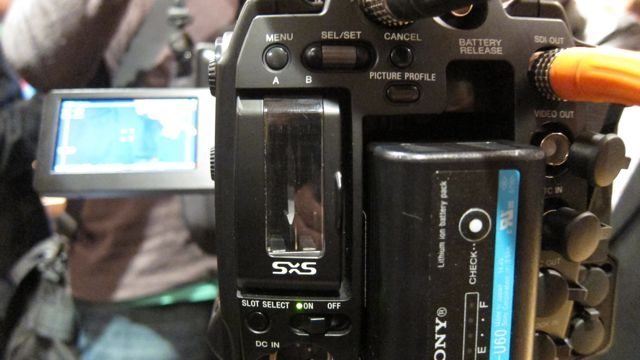 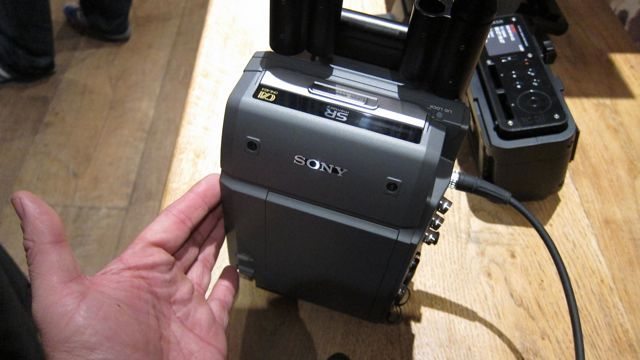 The F3 is list price around £12k and the F3K with 3 Sony PL primes is around £18k…it’s pricey for sure, pricey for an EX1 with S35 sensor, BUT this is a proper S35 sensor rated at ISO 800 and the features it is capable of (albeit with spending more money) can take it into SERIOUS high end Cinema territory. Is it an AF-100 competitor? Nope. The NX-CAM is much more going for that market and if it does it MUST be switchable as the AF-100 is a world camera. If you are to compete then at least have the same if not betters specs? Certainly the sensor in the NX-CAM is going to be a MASSIVE plus. A dedicated S35 sensor is a huge draw…oh well, things certainly got more interesting…AGAIN. Still going to get me that Panasonic though, especially as it’s out this year and the NXCAM won’t be till next summer and I don’t have the cash for the F3 right now and I love that full HD overcrank in the Panny…too many cameras…MUST HAVE THEM ALL! 🙂