The Nikon D800. The first full frame full HD DSLR to challenge the dominance of the Canon 5DmkII? 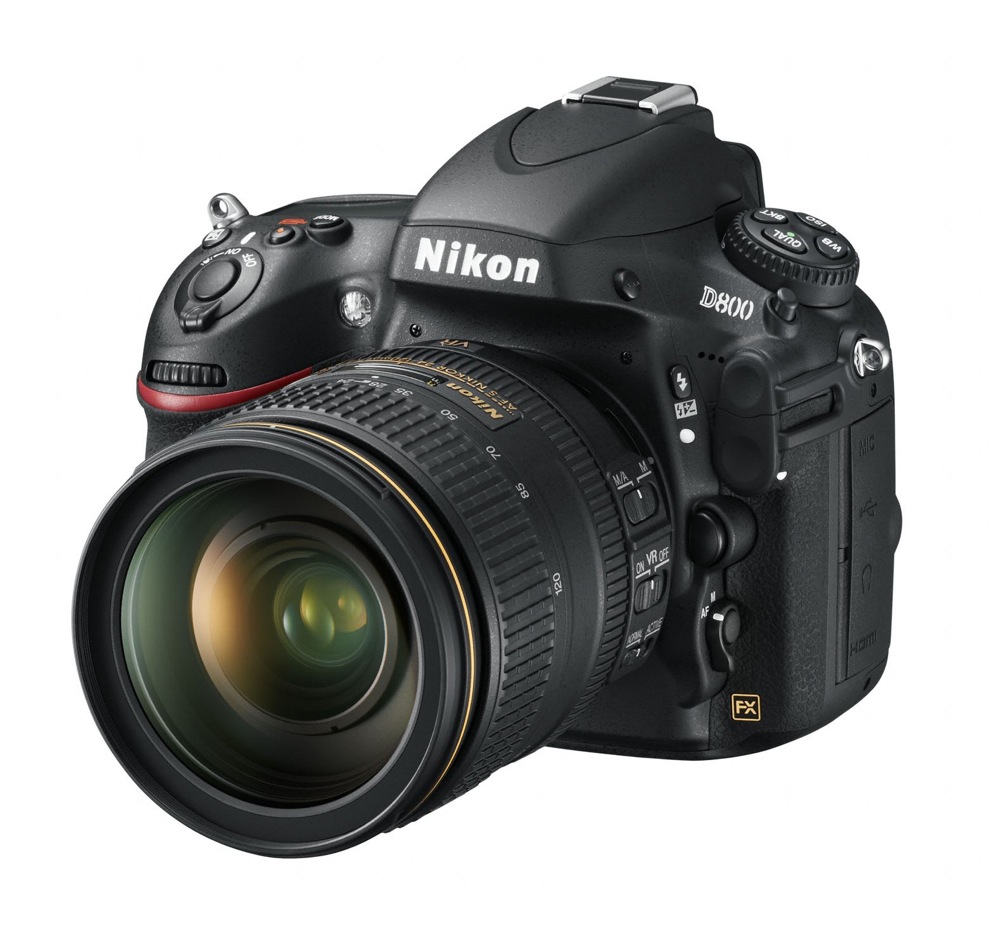 Full frame…kind of magical words for many, including me. Since the Canon 5DmkII came out all the way back in November 2008, not one full frame DSLR that shoots full HD video has come out. Countless crop sensor cameras, but no full frame ones.

Quite a while back we had Canon announce their top end 1DX which is due for release next month, I have not seen one yet so no I’ve idea what it actually is like. Then last month we had the D4 announced by Nikon, shipping relatively soon.

Neither of these is what you would call cheap in DSLR terms. The Nikon is priced at £4,800 and the Canon at £5,300. These are around the price of the very powerful Sony FS100 video camera, but of course they take stills AND have that full frame.

Don’t know what a full frame is? Well it is the format that your old SLR 35mm film still cameras shot. Back then it was just 35mm still, not to be confused with super 35mm movie film, as that is much smaller than a still full frame, more similar to the APS-C crop. Check out this image below from KenRockwell.com that compares the full frame Nikon frame (FX) with the crop version (DX). It’s a substantial difference in size. 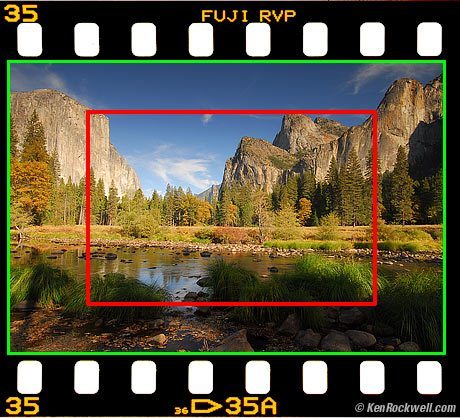 What does this extra part of the sensor give us?

Well first off it gives us much more of the lens to play with, unless the lens is designed specifically for the crop-sensor, in which case it won’t work on the full frame camera. A 14mm Canon for example on a 5DmkII is a thing of beauty; on the 7D it is rather pointless, as you lose too much of it due to the 1.6x crop changing the field of view to around 22.4mm.

Secondly it gives us an amazing aesthetic and at the same time the ability to get a crazy shallow depth of field if using a fast lens. This is good and bad…shallow depth of field means it’s harder to focus unless you stop down. But there is something unique about the full frame that makes people love the 5DmkII over even cameras like the C300. It’s inferior in image quality but has that unique look, and a full frame equivalent video camera is not on the horizon. Manufacturers want to make their video camera compatible with PL glass which is designed for Super 35mm film (much smaller than full frame) and will often vignette on larger sensors.

Nikon have just announced the new D800, a replacement for the D700 full frame DSLR that had no video. It’s a terrific looking camera with a few caveats.

Let’s look at the positive first, and remember I have not seen one or shot with one (I was invited to the launch yesterday in London but prior commitments meant I could not attend, which was a shame! They are down the road from me in Kingston so hopefully I can get to see them soon) I am basing this on what I have read and the video that has been released. Never ideal!

Full Frame AND crop sensor in one camera. Best of both worlds.

So if that depth of field is too shallow or you need extra length on your lens, then flick to DX mode and you have the Nikon crop, which is around 1.5x. A very neat feature. It does not have the 2.7x crop to make it in-line with the Nikon One system which would add even more flexibilty. But this is a huge feature and one Canon need to look at for their future cameras.

This is also huge. Compression is an ugly thing and the H264 compression out of the Canon DSLRs is one of our biggest issues. There is no clean output on the Canons. With this clean output we get 422 8 Bit uncompressed output and can plug into an external recorder like a KiPro mini, Ninja or something similar, letting us record in sweet ProRes or similar. I am not sure if you can do this whilst recording onto the internal cards. If anyone has this information please let me know.

This also makes it a lot better using external monitors and EVFs. A chance to be able to keep focus hopefully!

Sounds basic but very important. You can set the audio levels in the camera (I don’t think you get meters whilst recording), still only a 3.5mm stereo input jack of course, but now with the headphone jack you can actually monitor whether the sound is any good whilst recording. It is this main point that makes me recommend that people use dual system sound on the Canons. Yes it’s still not as good as a dedicated XLR external recorder, but it’s a good compromise when needed.

Although it’s still hampered by the EU tax rule (no stills camera can record one continuous clip of 30 minutes or longer or it’s classified as a video camera and therefore in a higher tax rule), they have implemented clip spanning so we can AT LEAST get 29 minutes and 59 seconds out of one clip.

Now my biggest concern is the size of the sensor. Actually let me be clear, not the physical size but the megapixels. Now this is based upon video functionality not stills. Yes, I am interested in stills especially for timelapse but the most important function for me is video.

The D800 has a WHOPPING 36.3MP sensor giving us a resolution of 7360 x 4912 pixels which is just insanely large. In comparison, the 5DmkII has a more conservative 22.1MP and the brand new top of the range D4 has a, some may say inadequate, 16MPs. Personally the lower the better for me. 16MP is MORE than adequate for stills unless you need monstrously large prints, in which case the D800 is what you need. More megapixels for video causes these issues: Image size needs to be drastically reduced to get down to the 1920×1080 full HD video image, and to do that in the Canons has meant line skipping, information binning, which gives us moire and aliasing. Not nice. In fact, very ugly. I am not sure how bad the binning is on the D800 but that is a lot of information to throw away. The image is 1.6x larger than the 5Dmk2, so that worries me. I have noticed some image issues on the video below, but never judge image quality based upon a compressed web video. I need to see the original, or better still, shoot with the camera to form a proper opinion.

Also the more megapixels means worse low light performance. The more tightly packed the photosites are onto the sensor (remember it’s the same physical size as the 5DmkII sensor, give or take a smidge) the less impressively it performs in low light. That is why people are raving over the D4’s low light performance as it has a reasonable megapixel count, so the photosites are bigger which is what we want (and part of reason why C300 and FS100 have exceptional low light). Again, this may be incorrect as I have not shot with it.

So, fingers crossed I will get my hands on one soon. I am very excited by this camera, and hopefully now that Nikon have raised their game with two exceptional looking cameras, Canon will have to reply with something pretty killer for the 5Dmk3 or whatever they call it. This is why we NEED competition. Just the release of the D4 made you wish the Canon 1DX had some of the features, the selectable crop, clean out, headphone jack…

If you are a Canon user looking to switch, remember there is no adaptor to put your Canon glass on the Nikon. Other way around then yes. In which case it is probably worth waiting to see what Canon’s answer is, as I am sure there will be one!!

Do check out the video below shot on numerous D800s by Sandro in Chicago. Personally I think it looks good, but I can certainly see noise in the shadows even on this web compressed version which normally hides such things. There are also some aliasing issues…minor though. Rolling shutter issues seem absent. A huge plus!

Oh…one last thing, any video shooters out there AVOID the D800E. It has no low pass filter which means aliasing and moire hell! It is designed to give more detail and resolution. We don’t need it!

Joy Ride from Sandro on Vimeo.

A film by Sandro shot with the Nikon D800.

Joy Ride – Behind the Scenes from Sandro on Vimeo.

Behind the Scenes video of “Joy Ride” directed by Sandro for the Nikon D800.