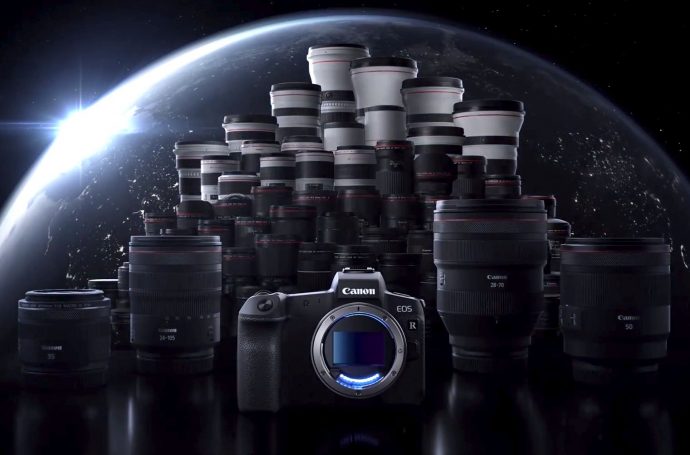 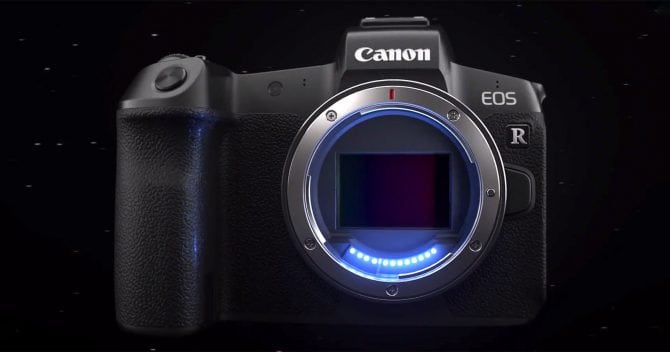 It’s been a long wait but finally Canon have announced the full specs of their first full frame mirrorless camera. Sony announced their first full frame mirrorless, the A7, all the way back in October 2013, almost 5 years ago and their first 5-axis stabilised sensor model just over a year later. Canon consumer APS-C mirrorless series, the M line, was unveiled in June 2012 but it’s not been a system that has been adopted by many due to the lacklustre lens line up and the very consumer specs. Their M50 is their best model in that line to date but it has a number of issues.

Today the Canon EOS R (R for revolution) was revealed to the world, although the full specs had been leaked a few days ago. I have yet to see it, touch it and of course shoot with it. It’s very dangerous to judge a camera based on specs, we all did that many years ago when they launched with C300 Cinema camera which had very underwhelming specs but turned out to be a gorgeous and very successful camera.

Obviously from the title of this blog post it is clear that I find the specs pretty disappointing. There are a number of things that I like the look of but they are outweighed (for me) by the negatives. The camera seems to be very much based on the disappointing Canon 5D MK IV, essentially a smaller mirrorless version with some new features and a few things lacking.

Lets start with the positives:

The new R mount looks great. It has the same diameter as the EF mount but with a much smaller flange which allows for smaller, faster and optically superior lenses. There will be an adapter for EF lenses for it of course but don’t expect any adaptor for Sony FE lenses due to the similar size flange. The adaptor will allow for EF and EF-S lenses (something the 5DMKIV cannot do due to the mirror getting in the way) and the R will switch the APS-C mode when it detects them (obviously with a loss of resolution.)

The new lenses look great, with the standout being the 28-70mm F2 L. There is also a 50mm F1.2, which is nice but not as nice as the new Nikon Z mount 50mm F0.95 which was recently announced along with their new Z line of mirrorless cameras (more on them later.) The number of high performance lenses announced is impressive, way way better than Sony’s E mount lenses which took years to get to the professional GM line.

Canon have the best video autofocus in the world, their dual-pixel system is incredible, I have the C200 video camera and it is one of the highlights of it. Sony’s phase detection autofocus is quickly catching up though and is faster on some of their cameras. The EOS R has this wonderful autofocus and a touch screen LCD to make the most of it, which is also fully articulating making it ideal for vlogging, neither Sony nor Nikon offer a fully articulating screen.

The EVF looks good with a 3.69 million dot OLED with 100 percent coverage.

It uses the Same LP-E6N batteries as the 5DmkIV which is a big plus as those are excellent and Canon 5D and 6D users will have stacks of these. The new Sony Z batteries in the A9, A7III and A7RIII are also excellent and improve on the awful batteries their first and second generation A7 models have.

There is a nice meaty battery grip on the camera which will please users with big hands. You know what they say about men with big hands don’t you? Big hands, big gloves and big camera grip.

There is a lovely looking liquid crystal display on the top which is way better than their previous 1980’s LCD style ones. It is very reminiscent of the Fuji XH-1 and GFX 50S.

You can get 10 bit 4:2:2 clean HDMI output which is the same as the new Nikon Z. The Sony A7 cameras only do 8 bit.
The 4K is no longer the massive motion jpeg but H264 All-I, 8 bit of course. The bit rate in 4K is 480mbps which is excellent but will need fast cards to write to this.
There is wifi built in as well as bluetooth, NFC and USB-C. There are thankfully headphone and microphone ports.
It weighs just 660 grams with a battery which is about the same as the Nikon Z7 and Sony A7III.
Onto the negatives:
The big one for me is without question the 1.7x crop in 4K for the video, whether recording internally or externally. This is the same as the 5DMKIV and the main reason it was the first 5D I didn’t buy. The whole point of using these cameras for video and why the 5D MKII was such a MASSIVE game changer was the ability to record HD full frame video. This gave the video a look that no other video camera could achieve no matter how much you spent. Whilst the EOS R does use the full sensor for HD still the fact it cannot do 4K without giving it a massive crop which approaches that of the Panasonic GH5S is a MASSIVE let down. In the 18 months since the MKIV came out and seeing how many people complained about the crop I had hoped that Canon had listened and done something about this. Yes the 30.3MP sensor isn’t ideal to create a great 4K and that’s why they are sampling that 1:1 which equals that 1.7x crop it is possible to get great 4K with high megapixel sensors. You only need about 10mp for 4K 16:9 video but you can still get full sensor 4K from much higher megapixels sensors in cameras like the Sony A7III, Sony A7RIII and Nikon D850. The new Nikon Z6 and Z7 cameras both of which have higher megapixels than the Canon but they use the full sensor. Whether they achieve this via pixel binning I don’t know but the crop for video with the EOS R is a real shame.
You can shoot 1080p video up to 60fps but not 120fps like the Sony and Nikon competition.
The stills frames per second is slow when shooting using auto focus, it is just 5 fps. If you turn AF off you get 8 fps but most likely 8 out of focus frames per second! Considering the cheaper Sony A7III does 10fps using autofocus this is quite poor.
There is only one SD card slot. For a professional camera that is 1 short, these days they all have two for backups or separate shooting. I would also have preferred dumping SD and moving to XQD, whilst those cars are more expensive they are more robust and can support faster bitrates. 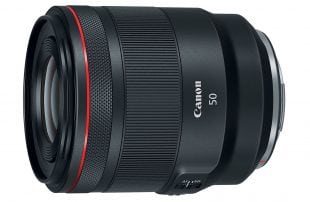 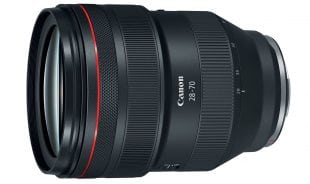 The lenses look amazing but OH MY GOD are they expensive! The 50mm F1.2 retails for $2,299, the  28-70mm F2 is a crazy $2,999. The 24-105 F4 IS is a much more reasonable $1,099 and will be a go to lens for many who buy this camera due to the range and price. The problem you have with all of these is there is no wide angle lens yet and with the 4K having a 1.7x crop that means you end up with FOV of 40.8mm to the 178.5mm which sucks for anyone hoping to VLOG with it. At least you can use something like the Canon EF-S 10-22mm lens and the APS-C mode to make the 4K wide enough but you are losing the shallow depth of field ability with that crop too.
The camera does NOT have IBIS (in built image stabilisation) where as the new Nikons do, the Sony cameras all do from generation 2 upwards. This is a big deal for me. I have become so accustomed to the benefits of this that when I use cameras without for handheld shooting I now struggle. The EOS R absolutely, without question SHOULD have IBIS. This is a huge omission. 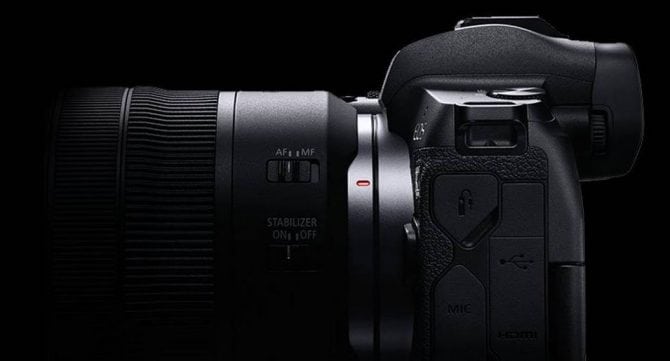 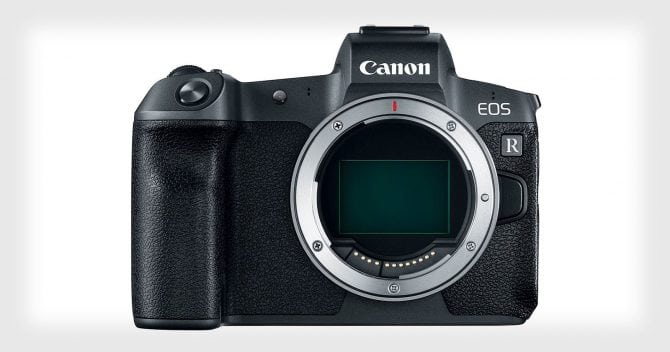 Overall thoughts
As you can see I am disappointed in the specs in both video and stills and I do feel they lag behind the competition. Sony are already onto their third generation of full frame mirrorless and the Sony A7III is an astonishing camera for the money, around $2000.
For me this camera isn’t a revolution at all. Canon are playing catch up and with these specs they are far behind the competition, as in Sony and even the new Nikons. I have read some apologists saying that this is just their first one and they will release a “pro version” that will rectify all my issues with it. Well the 5DMK IV is a professional camera so this is too. I know it’s their first mirrorless but Nikon have far exceeded this with their specs and cameras by Sony from 3 years ago have higher specs that this.
I REALLY wanted this to be great. I adore the Canon image and love what I get from my 1DX MK II, I just want a smaller camera like this with the modern features we get with the competition. If Canon want to compete with Sony and now Nikon they need to up their game. Even Panasonic are rumoured to be coming out with a full frame mirrorless camera and their GH5 cameras are incredibly good video cameras.
That being said I could be completely wrong and the experience of using it alongside the image quality could win my over. After all it does have dual pixel autofocus and that flip out LCD screen.
The EOS-R retails for $2,299 and comes out next month. 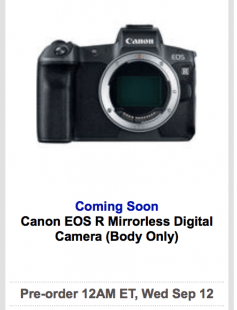 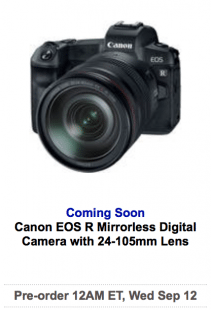