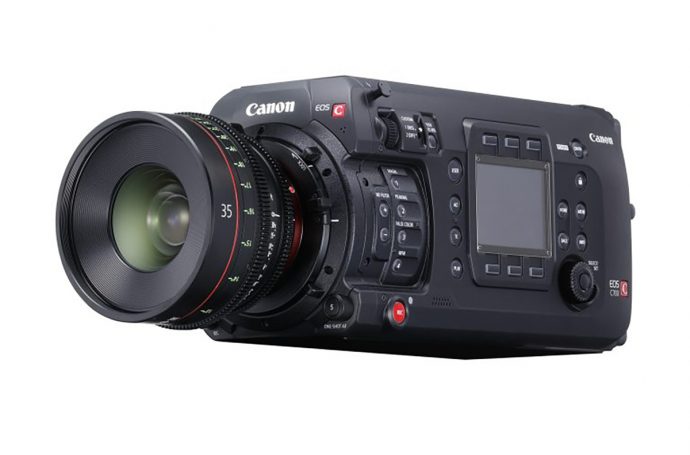 Whilst I don’t think I will be making IBC this year, I will be doing a few posts about new announcements that interest me (hopefully there will be a few!) I will be at Photokina in Cologne later in the month, though, where I will be doing daily talks for an hour about my experiences shooting with the Sony FS7/ FS5 and A7S cameras. Do come and check them out!

In the meantime, Canon just announced a couple of new cameras which occupy two very different price points in the market: a new flagship cinema camera the C700 and an update to the quirky but interesting XC15. I have zero experience with either camera; I just have the press releases. The XC15 looks identical to the XC10 but adds a useful XLR add-on module. I like the camera, but the lack of constant aperture on the lens held it back from being something that I wanted.

Canon took a fair bit of flak, from me included, for the lacklustre 5D MKIV video specs last week. It was very disappointing to see the latest model of this iconic camera get such a behind-the-times set of specs. Today they announced a much expected top-end cinema camera, the C700. Their previous flagship, the C500, was very much based on the C300 internally and externally, and only performed differently to that camera when paired with an external recorder to allow it to record 4K. The C300 was a huge success, despite some fairly uninspiring specs, due to a terrific image, ease of use, and solid internal codec. The broadcast sector lapped it up. The AVCHD-based C100 and C100 MKII has proved popular too, with the lower-end market. The C500 flopped, though. By the time it was starting to ship, Sony had announced the F5 and F55 high-end video cameras. The F55 especially, with its global shutter internal 4K and high frame rate HD trumped the C500 in every way. In fact I bought an F55 myself 3 years and only just last week sold it. Orders for the C500 were cancelled by many because of this. This was a shame, as the C500 produced a gorgeous image.

The C300 MK II came out last year with a very similar form factor to the previous model. It has a lot of big improvements including 4K internal recording (only up to 30p though) and high frame rate up to 120fps (but cropped sensor only), The image was lovely, the new codec very robust, but it was deemed overpriced and again quite underwhelming in the specs. The main reason being that Sony (again) had brought out the FS7, which had taken the market by storm due to its very impressive specs and relatively low price. The initial price of the C300 MK II was $16,000 compared to the FS7, which was around $8,000. Yep, half the price but with much higher specs on most fronts. The FS7 continues to sell hugely and is very popular on the rental market. It is called the new C300, ironically. The C300 MKII has so far failed to be taken up by many. Earlier this year Canon dropped the price by $4K in an attempt to shift more cameras, but it is still way above the FS7.

That brings us to today’s announcement. The C700 has a form factor not that far away from the Sony F5/ F55. In fact, it looks like a proper camera and goes on your shoulder! It is clearly going for that high-end market. 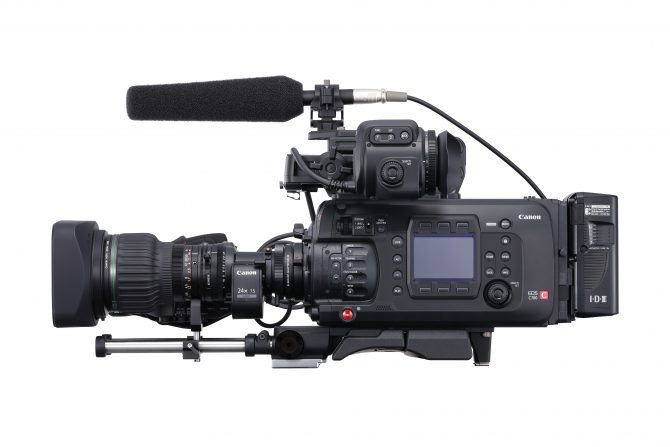 Here is the press release:

Canon today unveils two new flagship models in the esteemed Cinema EOS system – the EOS C700 (EF/PL) and
EOS C700 GS PL. Both models are ready for the 4K generation, enabling high-end production houses and broadcasters to intuitively and easily shoot with a wide dynamic range, in supreme quality. The EOS C700 cameras capture creative slow motion 4K video footage internally with high frame rates of up to 59.94P/50P and 2K up to 200p/240p (sensor crop mode), or 4K RAW up to 100P/120P, to the optional dockable Codex RAW recorder. Building on the Cinema EOS System range, the powerful video cameras are modular in design to adapt to all shooting requirements and include support for the Apple ProRes format for the first time. Designed for fast-moving subjects and action scenes, the EOS C700 GS PL is also the first Cinema EOS camera with a global shutter.

Quality and versatility for every production

Created with cinematographers and high-end broadcast production professionals in mind, both models deliver the versatility that the industry demands using a Canon Super 35mm CMOS sensor with a maximum pixel count of 4.5K  (EOS C700 GS PL at 4.2K). 4K DCI or 4K UHD can be recorded up to an incredible 810Mbps. Combining the sensor with triple DIGIC DV5 processors, documentary makers can capture natural history and compelling stories in incredible detail, delivering spectacular high-resolution videos with low-noise and shallow depth of field. Together, with a high ISO of up to 102,400 and built-in ND filters, with up to 10-stops of control, both models offer enhanced flexibility and stunning cinematic detail, in even the most challenging of lighting conditions.

The EOS C700 EF’s Dual Pixel CMOS AF is incredibly effective at locking onto and tracking a subject allowing the camera operator to concentrate on framing the shot, making it easier for news reporters to film accurately on the move. Operators on drama productions will appreciate the acclaimed Dual Pixel Focus Guide feature, which is ideal for greater control and accuracy. Supporting Canon Log 3, Log 2 and Log Gammas, the EOS C700 (EF/PL) is capable of recording up to an incredible 15-stops of Dynamic Range (14-stops with the EOS C700 GS PL), where footage can be graded with greater confidence and flexibility in HDR post-production workflows.

The EOS C700 (EF/PL) provides a wide range of colour space options, including the Canon Cinema Gamut, BT.2020, and DCI-P3, as well as support for ACES 1.0 workflow. The camera also supports HDR monitoring with SMPTE ST.2084. For a truly integrated, efficient and reliable HDR workflow, all versions of the EOS C700 can connect directly to the new DP-V2420, Canon’s 4K high luminance reference monitor that is able to support the new ITU-R BT.2100 standard for HDR output.

Offering universal appeal for high-resolution production, the EOS C700 is capable of recording high bitrate 4K files internally to dual CFast 2.0™, supporting both XF-AVC and ProRes formats, while simultaneously recording 4K RAW files to an external recorder. Equipped with an Ethernet (RJ45) terminal, the EOS C700 allows broadcasters to live stream Full HD footage via the internet, and also can be connected to a wireless network using the optional wireless file transmitter (WFT-E6B/WFT-E8).

To complement this powerful new camera, Canon has worked with Codex to provide a fully-integrated recording and workflow solution. The combination of the dockable Codex RAW recorder (CDX-36150) with the Canon EOS C700 allows for high-speed 4K RAW recording at up to 120 frames per second (fps). Future firmware upgrades will include 4.5K RAW recording at up to 100 fps, 4K Apple ProRes at up to 60 fps, and Apple 2K ProRes at up to120 fps. Codex’s production-proven recording media – Codex Capture Drives – are used for both RAW and higher-speed ProRes recording. Along with the images, frame-accurate metadata such as lens information can also be captured, streamlining production and post-production processes and delivering time and money savings.

Build the camera your own way

The camera can be adapted to suit the needs of the individual as well as for each filming scene. For full customisation, there is an extensive range of optional accessories including a new 0.7’’OLED viewfinder system, the EVF-V70, which offers Full HD resolution (1920 x 1080) with a wide colour gamut. The optional Remote Operational Unit OU-700 can also be used to control the camera when shooting with a multi-member team. For newsgatherers and high-end documentary makers, a bespoke Shoulder Support Unit, the SU-15, and new Shoulder Style Grip Unit, the SG-1, will be available for on-the-move shooting.

For complete creative freedom and choice, anamorphic lenses are supported, along with a huge range of EF and PL lenses, plus the ability to use compatible Canon broadcast lenses with the optional B4 mount adapters (in Full HD mode). The EOS C700 with EF mount with Cinema Lock and EOS C700 PL with Cook/i support can even swap mounts by Canon service, if user requirements change. 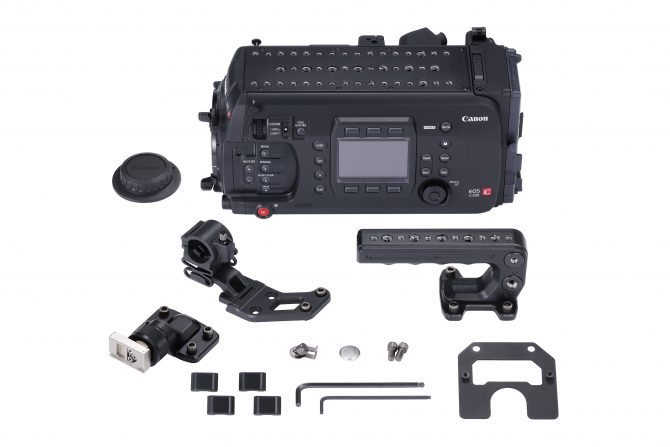 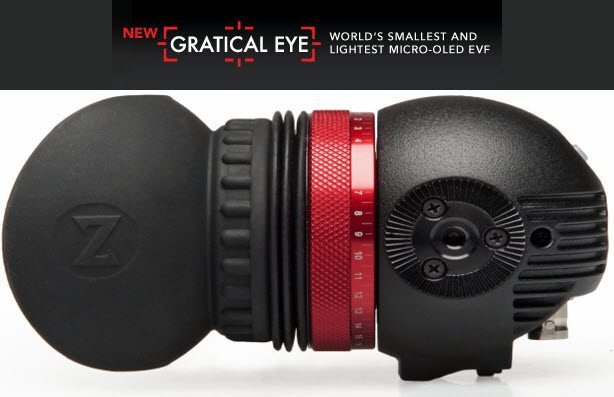 The camera looks very interesting and has some nice specs, not revolutionary though, and it is expensive, especially if you live in the UK! The dollar price is $28K, the pound price is £27K with VAT for the CMOS version. Ouch!

It will be interesting to see how this camera fares in the high-end market. It is priced high but falls under the specs of much, much cheaper cameras in some areas. A camera isn’t just specs, as the C300 proved, but I feel Canon has a bit of challenge to make inroads into the market. The cropping of high frame rate in HD is again quite astonishing. I know they are doing it because they don’t want to sacrifice quality, but this is a major omission. With the add-on raw unit (price unknown), then it will be able to do full sensor 4K up to 120fps, but that is a minor concession.

As I reach the end of this post, it reads very much as another disappointed-in-Canon post. It didn’t set out to be! It is just that, as I go through the specs and add up the costs…If you are going to bring out a camera in this price bracket right now, it needs to have a real headlining feature to justify it. I don’t see that it does. The £16,000 Varicam has a standout dual ISO feature that means the noise level at 5,000 is the same as the the other base rate of 800. That is a revolutionary feature. The dual pixel auto focus on the CMOS version of the C700 is great for sure and easily the best innovation Canon have right now. I have a deep love for Canon Cameras (in fact I have just picked up the 1DX MKII to replace my 1DC). I love the image and I really love the people who work for them. It is good to see them bring out a proper flagship camera to challenge the others, but I just can’t get excited over this and I REALLY want to.

What do you think?