Are Canon trying to push raw video into the mainstream with their C200? 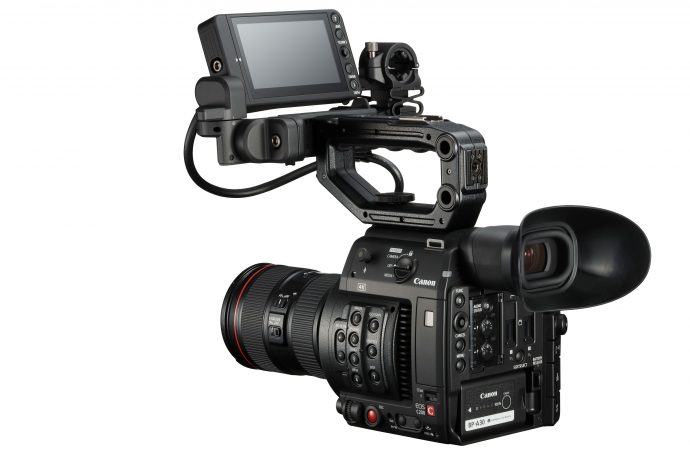 Canon today have announced a cinema camera that is actually very surprising in its specs. The C200 has been much expected as their lower end Cinema camera (the C100 MKII) is HD-only and a low-quality HD codec too. What wasn’t expected is that this camera records internal raw as its main recording format, which is an incredibly bold move… and that is rare to say about a new Canon camera these days! 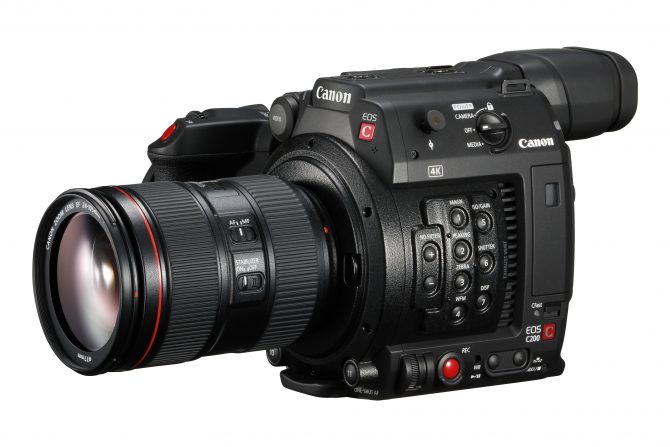 These are the main features of the camera 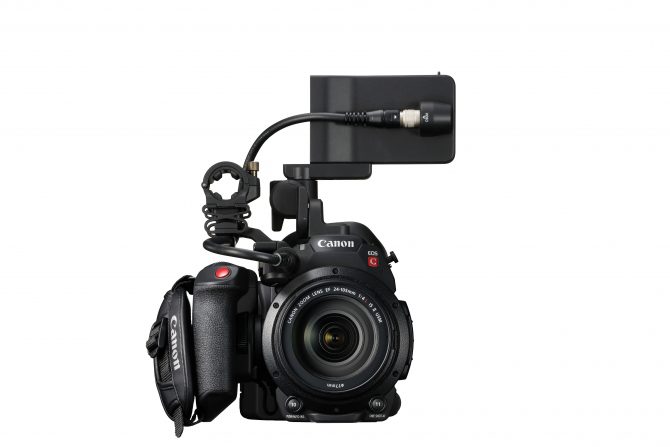 I have owned the C300 and C100 (in fact, I still have the C100) and both are excellent video cameras, but both were very underwhelming when looking at the specs. This is the first time I can think of where the specs of a Canon camera have really surprised and impressed me.

Let’s talk about the key feature first. Raw (why do people still write it as caps? It isn’t an acronym!) video recording as its main recording format is really, yes I will say it again, bold and rather impressive. They are calling it “Cinema Raw Light” and it is a variable bitrate compressed raw. This is good, as uncompressed raw video is totally unmanageable in data size. Here they are talking 12-bit raw for DCI 4K up to 30p and 10-bit for up to 60p with a data size of around 1gbps giving around 15 minutes on a 128gb CFAST card. This is not that small, but it is manageable…if you have a lots of cards and hard drives!! 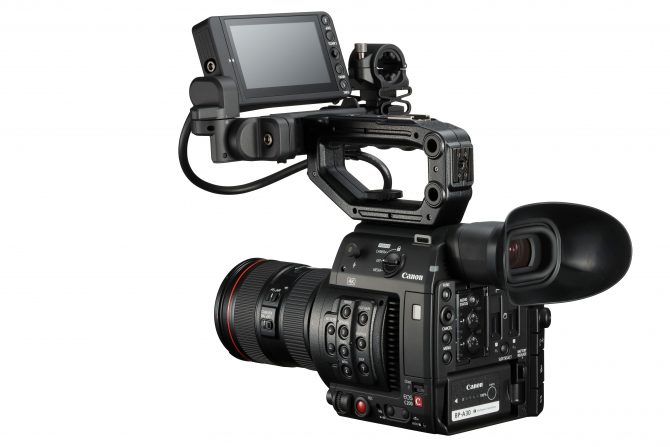 What if you don’t want raw because it is still too data-heavy for you? Well, at launch you will get 8-bit h.264 .MP4 4:2:0 35mbps in HD and 150mbps in 4K. This is quite low, especially compared to the raw and to, say, the Sony FS7, which is about the same price. FYI the 4K internally on the Sony FS5 is actually only 8-bit XAVCL 4:2:0 100mbps, but you can use an external recorder with that camera (and the paid raw firmware upgrade) to record to an external recorder that can take that 12-bit raw signal and record at 10-bit 4:2:2 4K prores. Check out my blog post tomorrow, as I have a new project I shot for Fuji lenses using this exact combo.

There will be XF-AVC added in firmware next year, but there is no info out there as to whether it will be 10-bit or not. 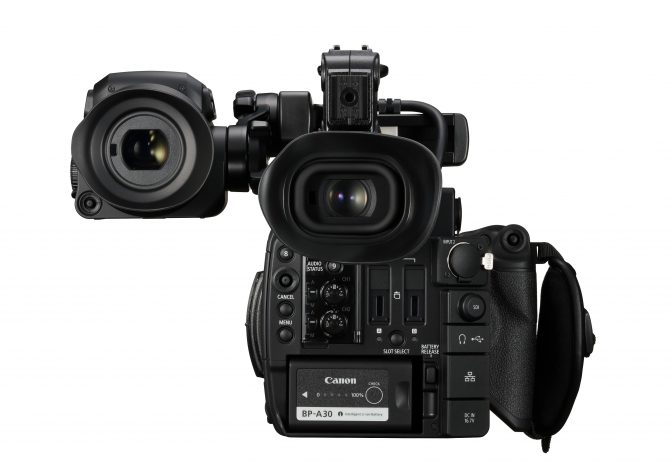 I did a whole series on video autofocus, what works and what doesn’t which you can watch here and none of the Sony video cameras did at all well. The best was from my beloved Canon 1DX MKII with its dual pixel touch screen autofocus. The C200 is the first video camera from Canon to give us touch screen dual pixel autofocus, and the importance of this must not been underestimated.

Canon dual pixel AF is SO good that it changes the way you shoot for certain things. Interviews and gimbal work especially. Whilst Sony have incredible features on their video cameras, their AF needs to be drastically improved. The best AF Sony have for video are on their A6500 and A9 stills cameras, both of which have touch screen autofocus using phase detection. The fact that the C200 has Canon’s amazing autofocus via touch screen isn’t surprising, but it does mean this camera trumps its bigger brother, the C300 MKII, in this and internal raw.

I haven’t yet gotten to try out the camera, but I hope to at some point. The appeal of internal raw is there, but it is still rather big file sizes, and according to the Canon website there is no support or planned support with Adobe Premiere.

This is from their press release:

“Canon has worked with several partners to ensure Cinema RAW Light is integrated with various software programs[i]. As a result, editing and grading of the Cinema RAW Light video format will be supported in DaVinci Resolve of Blackmagic Design. Editing will be possible in Media Composer from Avid Technology, using Canon RAW Plugin for Avid Media Access[ii]. This format can also be processed using a Canon application, Cinema RAW Development[iii].

This would mean Adobe users would need to transcode before editing, a major pain. Raw editing in Premiere with RED raw for example is actually totally do-able with a fast enough computer.

Now of course if you are looking at the competition, other than the Sonys that I have mentioned, we have the BlackMagic Ursa Mini Pro. This also has internal raw as cinema DNG, but the file sizes are too big. It does, however, have the rather wonderful ProRes 10-bit 422 internal also onto CFast. What that camera does not have is proper autofocus or the ability to shoot in much more than ISO 800.

The C200 has ISO up to 102,400, and I expect it to be usable up to around 10,000 ISO. Like the other Canon C-line video cameras, this makes it an excellent documentary camera…although that is where I get confused, as the non-raw internal recording isn’t good enough for broadcast work, and the raw is too unworkable for broadcast work.

So who is this camera for? Personally, I think it is for indie filmmakers and small 1 to 2 man production companies who can deal with the workflow on a smaller scale. How about movies? I guess so! Probably more than the C300 MKII, which is really confusing!

This isn’t a replacement for the C100 MKII. It fits in between that and the C300 MKII yet outperforms that camera in some key ways.

Price wise, I still think it needs to be lower, to compete with the Sony FS5, as I just am not sure who the target market is. The C300 was and still is hugely used in TV, but this won’t be with those recording options. One is too good and one isn’t good enough! Raw is still really not a general video production format, even in this iteration…the file sizes are still too big, though having raw internally is a great thing and mustn’t be forgotten.

I would 100% shoot raw for my filming work without question if I could cope with the data, both in storage and processing. I can’t and this won’t help. I wish I could, as the power of raw is wonderful. All my photos are of course taken in raw, and I hope one day I will be able to do the same with video. I use raw when I need to for occasional shots, I have cameras that can record raw. I just choose not to for the previous mentioned reasons.

There are rumours that Panasonic will bring out a Micro Four Thirds based video camera at Cinegear this week. That will be interest to see. If it is a GH5 in a video camera body and cheap, that will appeal to many but, it won’t have the amazing autofocus that Canon have and I would be shocked if it did internal raw!