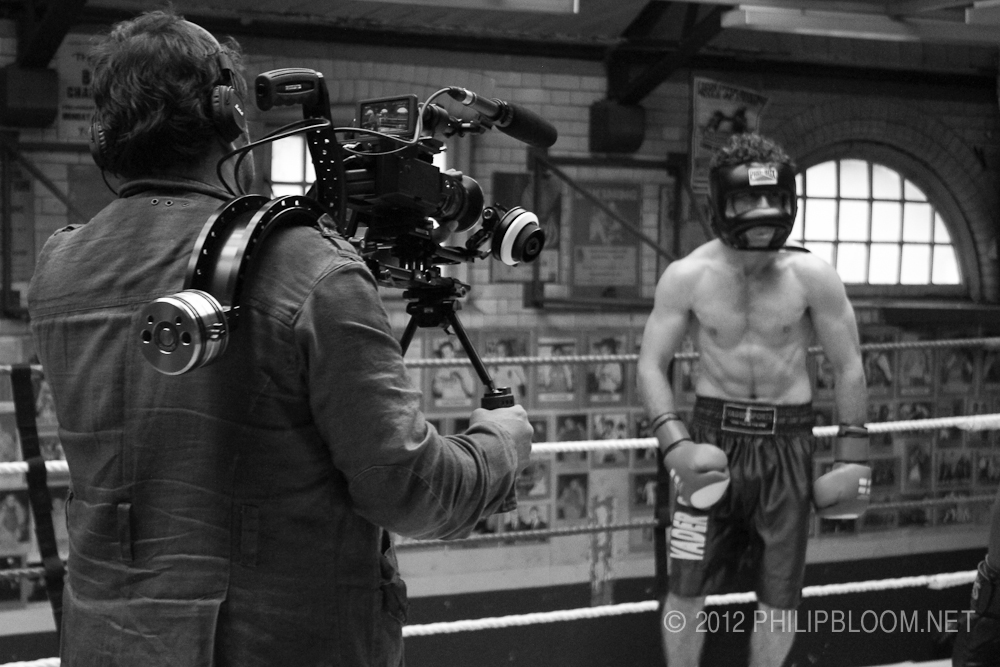 THIS IS A POST FROM APRIL OF A SHOOT FROM JANUARY THAT I HAVE REPOSTED AS  YOU CAN NOW ACCESS THE BTS WITHOUT REGISTERING…HORRAY!

ETHICS STATEMENT: I was hired by Sony Europe to shoot this film and Zacuto are one of my main site sponsors. Read more on my ethics statement here.

I was asked to make 3 short films for Sony’s FS100 promotional campaign taglined “Extra.Ordinary.” The brief was to take ordinary things and make then come alive. The first piece was of a rather run down fun fair in north London. The second was a cake being made. The third idea formed the competition to win an FS100 and for me to film the winning idea. Peter Hastie from Glasgow won with his idea of filming boxing training.

This was great for me as the other two films were rather sedate, and this gave me an opportunity to do something way more kinetic, and just as exciting, it was going to have a lot more sound in it! I convinced Sony to let me also do an interview in the piece. Although as it would need to be subtitled for all the different languages, I did have to make it short and punchy (figure the pun!)

My concept was simple. We see lots of films about boxing and training. I wanted to make a short, snappy portrait driven by the words of Festim (which is a gamble as it’s interview driven). I have no interest in boxing as a sport. I don’t follow it. I don’t enjoy watching it, but it’s a very visual thing to film. The best docs for me to shoot, even micro ones like this, are the ones where don’t like what they do but I am fascinated by it. I want to know why he loves boxing, as I don’t get it. Can you find out in less than 2 minutes? That was the plan! I didn’t want the narrative to be too linear, lots of cross-cutting back and forth and ending before a punch is thrown…one of the directives from Sony was that no physical contact was to be shown with another boxer. That was fine by me. More challenging! 🙂

I won’t go too in-depth here, as I talk a lot about the making of the film in the two behind the scenes videos that were made for Sony. They can be viewed by clicking the below images, as long as you are registered you can watch them. Part 1 looks like it hangs but click play and it will load. Part 2 still seems to hang…speaking to Sony to get it working! A shot at greatness is what the film is formally called. I just renamed it for myself! 🙂

Watch the BTS below

We follow Philip Bloom shooting on Sony’s Brand new NEX-FS100E, with a bunch of handy tips along the way.

In this film we visit Repton Boxing Cub in East London, and show how the camera lends itself to being rigged in all sorts of inventive ways

We follow Philip Bloom shooting on Sony’s Brand new NEX-FS100E, with a bunch of handy tips along the way.

In this film we visit Repton Boxing Cub in East London, and show how the camera lends itself to being rigged in all sorts of inventive ways

I struggled through even though I look like crap and sound like crap. I was pretty sick with laryngitis when I made this film! It was when I saw the BTS of this that I started my health kick to get back into shape. Didn’t help that I looked even worse next to our boxer!

Festim was chosen because he was at Repton Boys Club gym where we filmed and he had the look, style and voice of what I wanted. He is not an actor or a model. He is a real person and although the film was totally under my control and more or less storyboarded, his words were not. I interviewed him rather than giving him lines. I wanted these to be his own words.

On May 6th as part of a special one-day event in NYC I will be dissecting this film from conception, to shooting, lighting, sound, editing, grading. I will be one of 3 speakers. The other being Adam Forgione going in depth on sounds and Timur Civan talking about lighting. You can book tickets and read more by clicking the image below. 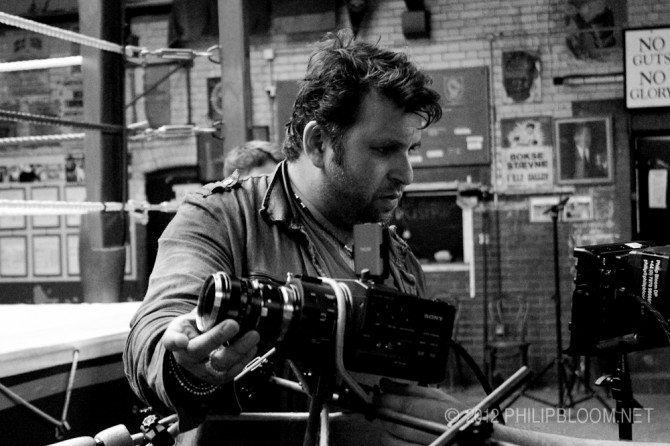 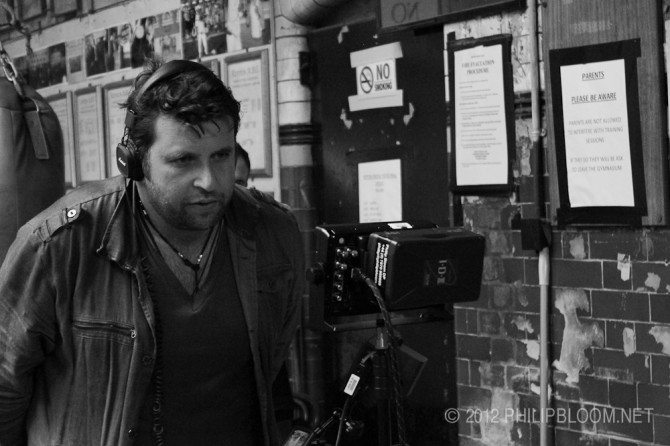 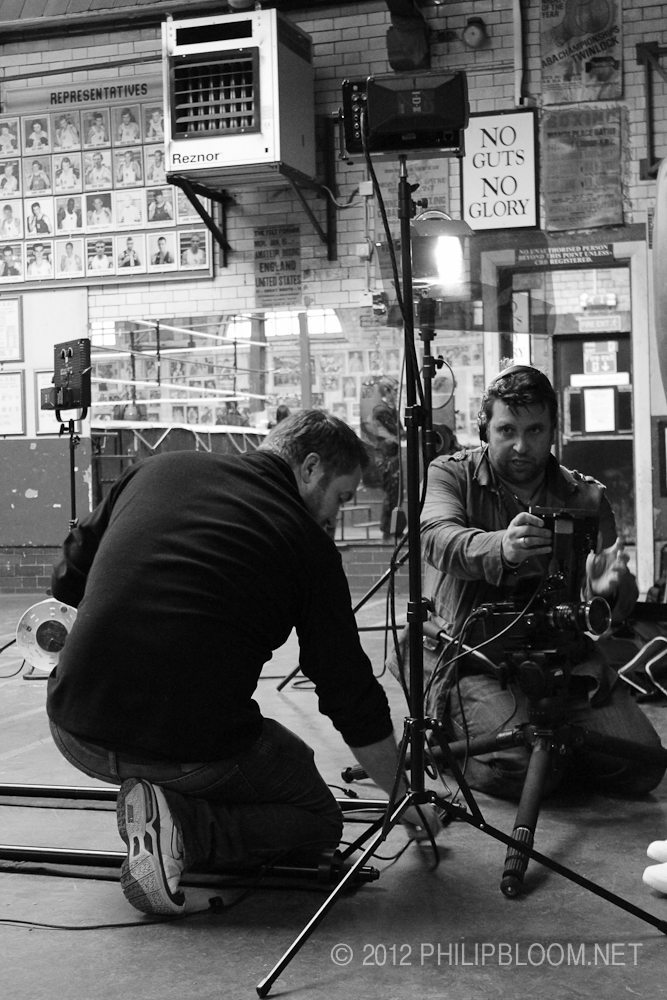 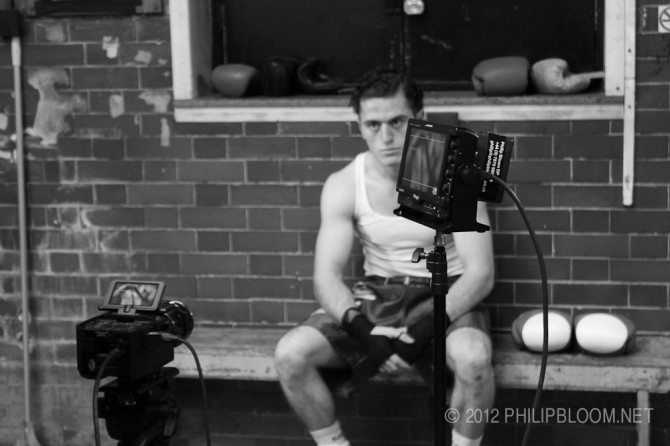 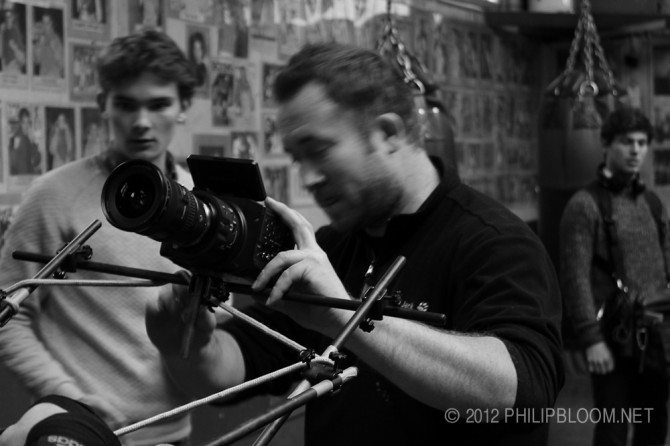 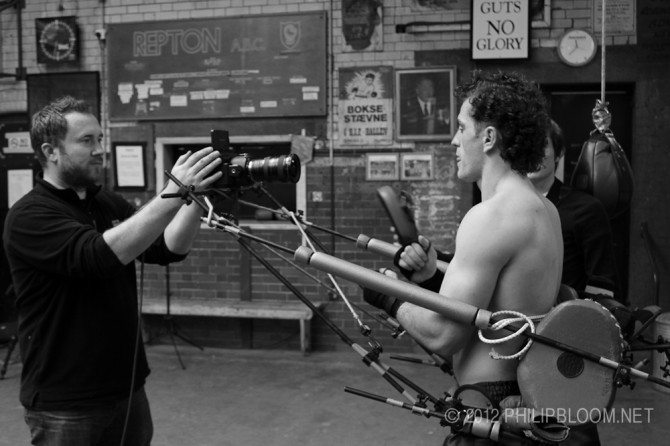 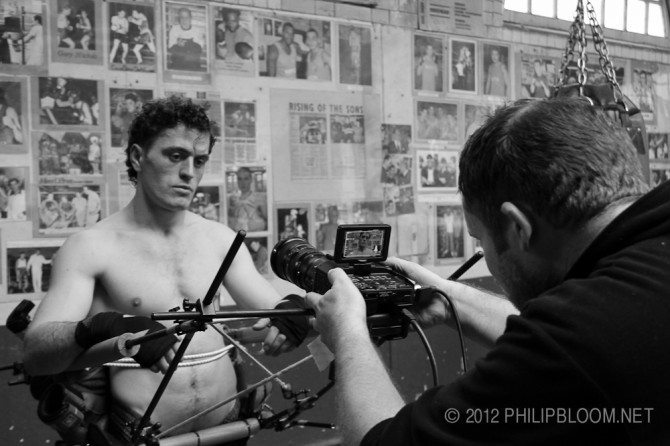 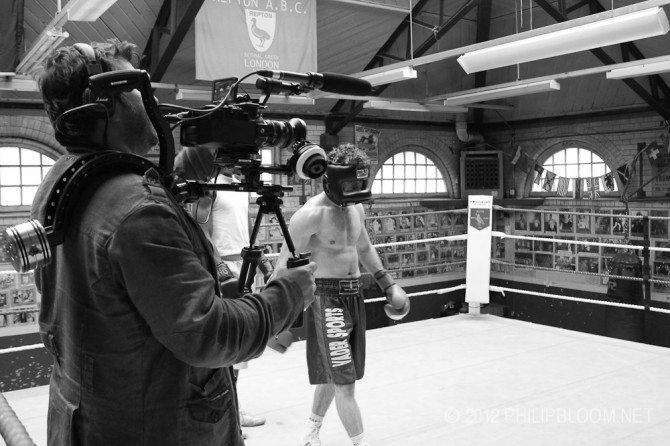 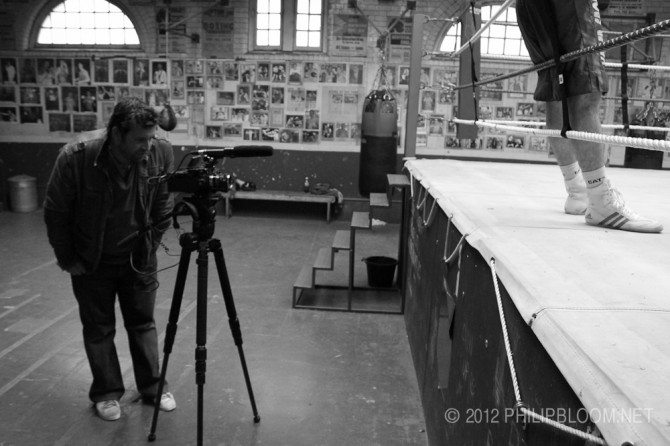 The main gear I used was as follows:

The FS100 is a great camera with a couple of caveats. It shoots amazing pictures but is ergonomically awkward and the highlights have a tendency to go a bit yellow when blown out, but it’s the best camera on the market for the money by far. You can get past the ergonomics with a decent rig and with the right picture profile you can tame the highlights.

For all the handheld I shot with the new Zacuto Scorpion rig which was a dream to use. Designed for DSLRs then turned out to be perfect for the FS100. It’s pricey but turned out to be exactly what I needed. The FS100 absolutely needs a rig to shoot handheld.

For the picture profile I used Frank Glencairn’s G-Log A.

Everything was coloured with Magic Bullet Colorista II and a tiny touch of Looks 2. Both can be bought for 20% with the code bloom20 at checkout

Sound was of course what made this come to life. I used two RODE microphones, one mounted on the camera and one on a boom. James Miller was once again my erstwhile assistant. I also had 3 guys come along to intern to get some experience. Ollie Robbins, Sander Saar and Ben Carlson. The FS100 is a proper video camera with proper sound controls and sound inputs. Recording sound in camera is not challenging like DSLRS. It’s a piece of cake!

There is a loads more info on the Sony site in the BTS films and the tip sheet. Head on over there to check them out!

Music was by the fantastic Niklas Aman who is scoring two films I DP’d for Danny Lacey. Check out his very affordable and brilliant stuff here.

Portrait of a boxer from Philip Bloom on Vimeo.