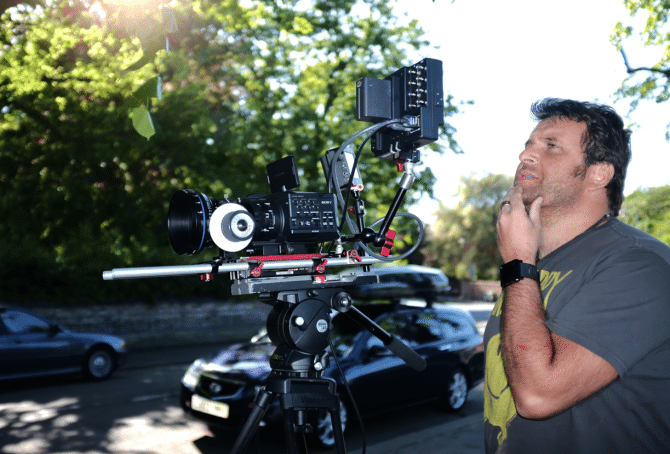 This comparison has be done by myself and with the help of Suresh Kara from Documovie.co.uk for fun. We have tried be as accurate as possible but there will always be anomalies due to the shoot being conducted in the “real world” not in a studio. Do not treat anything in here as gospel. We don’t therefore neither should you!

Neither Canon, Sony or Panasonic have paid us any money for this. Sony did supply me with the FS100 to check out but no money exchanged hands, they simply wanted my opinion on it.

This was done in our own free time to give people more information about these new camcorders. Both myself and Suresh are AF101 owners and have been very curious how the new FS100 compares. I am also a recent Sony F3 owner. This is not a Zacuto shootout or anything similar. It is primarily about camera operation and features with a few shots thrown in to compare. I am coming at this from a cameraman’s point of view as to what it is like to shoot with this.

Of course the temptation to obsess over the difference in each image is strong, resist it. Sure, do that with the Zacuto “Single chip camera evaluation” shoot out but not this. There are far too many anomalies for that. Even my first low light test I screwed the AF settings up and had to reshoot it. This was done for fun and to give more information to people out there like myself and Suresh. Never buy a camera based upon one person’s opinion. Always try it out first, especially if you are spending thousands!

Well It’s finally here. I had to split it into two parts as it was simply impossible to manage as one and far too long for internet viewing.

This is nothing like the upcoming Zacuto shootout which is coming out in June. For starters I am looking at just 3 cameras and focusing much more on features and operation than just the image. The Zacuto Shootout when it comes out will be fantastic and perfect for people to really obsess over images!

So myself and Suresh Kara from Documovie.co.uk made this little comparison video as a “real world” how these cameras operate in the field test with some image comparison.

It’s split into two parts. The shooting is part 1 and my thoughts and overview are in part 2. Both together function not just as a comparison but as a review of each camera going in depth into what they have to offer. But I have designed that you can learn most of what you need from Part 1 .Part 2 is there if you want more details, it’s less interesting as it’s just me at my kitchen table going into the ins and outs of the cameras, the pros and cons in detail.

Do check out my earlier blog with some bits of pieces on there and some links to downloadable pro res lt files!!

I will be doing a separate blog on the comparison between stuff recorded on the Atomos Ninja versus in camera at a later date.

I used the AF100 Picture Profiles by Abel Cine which you can see here and an adaptation of my EX1 picture profile settings for the Sony Cameras which meant -7 detail and various other tweaks, but they aren’t perfect.

The majority of this was shot with the AF101 apart from the opening introduction which was on the F3. Part 2 has lots of shots from the Canon XA10 as cutaways.

Brought to you in association with Kessler University.