Sound has always been one of the biggest stumbling blocks for HD-DSLRs for me. Documentary filming is one of my biggest passions and until now I have always had to try and cope with dual system sound or a mic like the Rode Video Mic plugged into the mic input of the camera and left on auto. 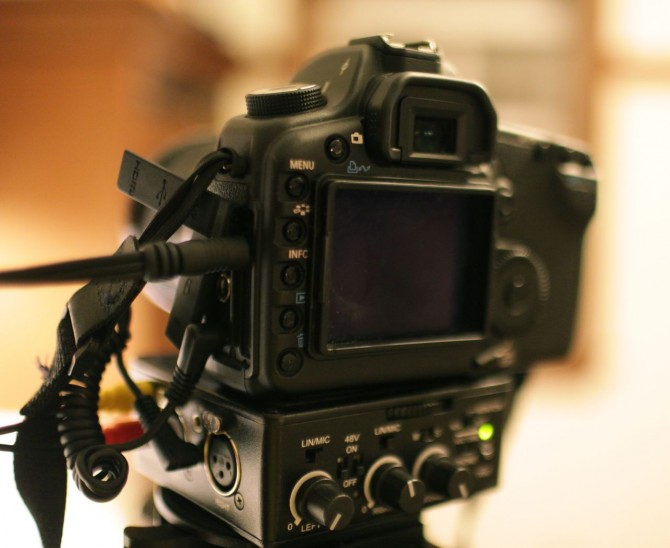 XLR adaptors for cameras are nothing new. Beachtek and other companies have been doing them for donkey’s years. But the HD-DSLRs that I use. The Canon 7D, 1DmkiV and 7D have big problems with sound. The input being a puny 3.5mm jack is of course fixed by these XLR adaptors but that is only part of the issue. The main problems are auto gain control, otherwise known as AGC. The lack of a headphone jack (!), no onscreen meters. It just plain sucks!!

Now the previous Beachtek adaptor that I played with really wasn’t good enough for me. It’s passive so had no amplification making using certain microphones a real no-no. The AGC of the camera would try and bump up the levels if the signal was too low causing nasty hiss all over the sound. Also the HD-DSLRs with their current firmware have no audio meters. The SLR has no proper meters on it. But it does have lights that flicker green for good levels and red for bad. Not exactly ideal but better than nothing.  The new 5Da does have proper meters but is’s passive device.

I have just received a pre-production DXA-SLR XLR adaptors from Beachtek. I have been bugging them for ages to try and review one of their units and finally have got one! The SLR is an active adaptor and has pre-amps in it making it usable for just about all mics out there. It also has +48v phantom power so can power your mics that need it. There are also gain switches underneath the unit. There is a +15db switch for either of the two channels. 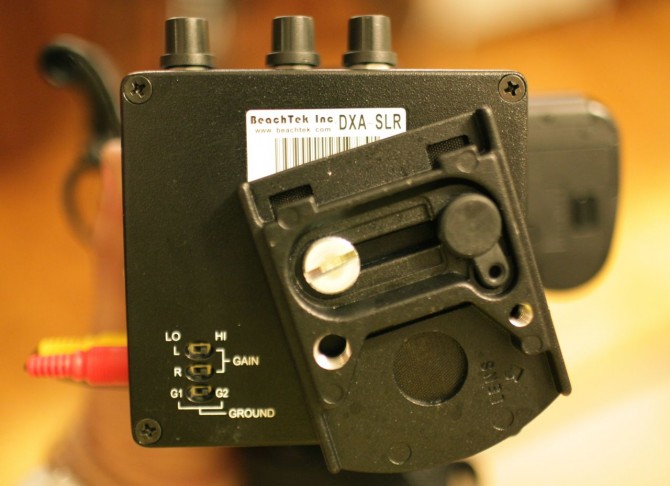 Other plusses. It’s smaller and more sturdy. Made of die cast aluminium.  The old one also covered the battery compartment. A right pain. This one doesn’t!

A very key and incredibly neat feature is the ability to “disable” auto gain control on the camera. It does this in a very clever way. This is from the manual…”This switch is a means to disable the wild swings of the Auto Gain Control in the camera. It activates an inaudible tone of 20 kHz to the left channel (when set to STEREO operation) that prevents the Auto Gain Control from increasing the gain to its maximum level. This reduces the hiss that normally occurs when the camera is recording audio during quiet moments. This inaudible tone is recorded by the camera but can be easily filtered out if necessary.”…and you know what…it actually bloody works…remarkably well!! This is a big deal, until we get official firmware that disables this that bloody AGC for us,  this feature it a bit of major step forward for HD-DSLR sound, not quite a game changer but damn close! Of course magic lantern firmware does this too, but this is much simpler and easier and just a flick of a switch. Although magic lantern offers way more additional features than this.

Another very neat feature (if you aren’t using magic lantern as that disables the AV port and turns it into a headphone only output without disabling the LCD screen) is the phono jack inputs which when plugged into the AV jack of the camera let you hear, through the Beachtek box, the sound that has been recorded in camera. This was previously not possible. Of course the LCD screen will turn off when you play back sound with the AV lead plugged in and the only way you will see a see a picture is if you have a composite monitor plugged into the video signal. But it’s GREAT to finally be able to play back sound recorded in camera and check how it sounds. Before this I had to use the awful crappy in built speaker of the camera or offload the clip to the computer. Again, not ideal. Be great if we just had a headphone jack, but a nice feature that Beachtek have added. This is unique to the SLR adaptor. 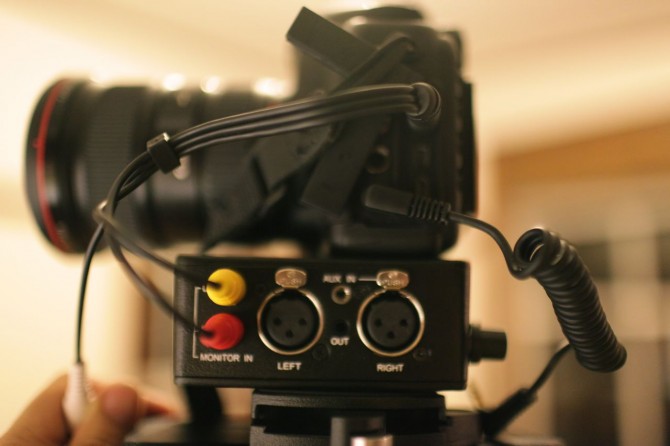 I have used the Juiced Link XLR adaptor too, this does have pre-amps and gives you very nice sound, but is lacking a few important connections for me, although their new DN101 accessory fixes most of issues by giving it  headphone jack, meters and an AGC disable trick too I hope to use this one too soon, it’s sitting in London waiting for me!!… this new Beachtek adaptor has set the new bar for XLR adaptors and means the next time I shoot a doc with my 5D I am going to probably record in camera sound for the very first time. This is a quite a big deal! 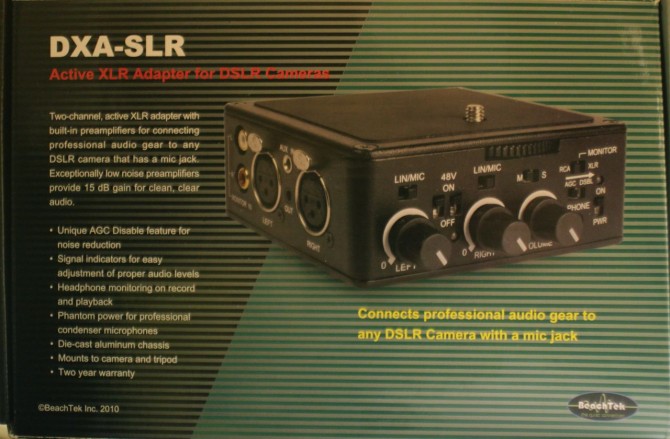 I am going to use this with my incredibly cool new microphone. The Holophone Portamic 5.1 pro. That captures Pro logic II sound straight into the Beachtek box!! when played back through an amp with Pro Logic II decoding you should get great sound. Also you can take the 6 channels of sounds embedded in the stereo and decode them with a piece of software called Surcode for Pro Logic II. 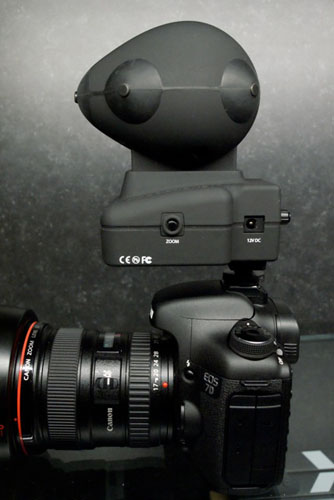 Of course REALLY good sound is key and this won’t be as good quality as recording sound on say a Zoom H4N which can record at a much higher bit rate and sound a lot better…but when operating one man band I feel we finally have a really usable option now. This is great news for a lot of people.

One thing I would love to see on this is proper audio meters like the new DXA-5DA has…but all the other new features make up for it…just. But please Beachtek stick some proper meters on this!

I understand this won’t be available until around the end of March. But make sure you get in early to get one. Beachtek sold out of the DXA-5D adaptor pretty fast!!