The no longer evolving review of the Sony A7s now with extreme low light video. 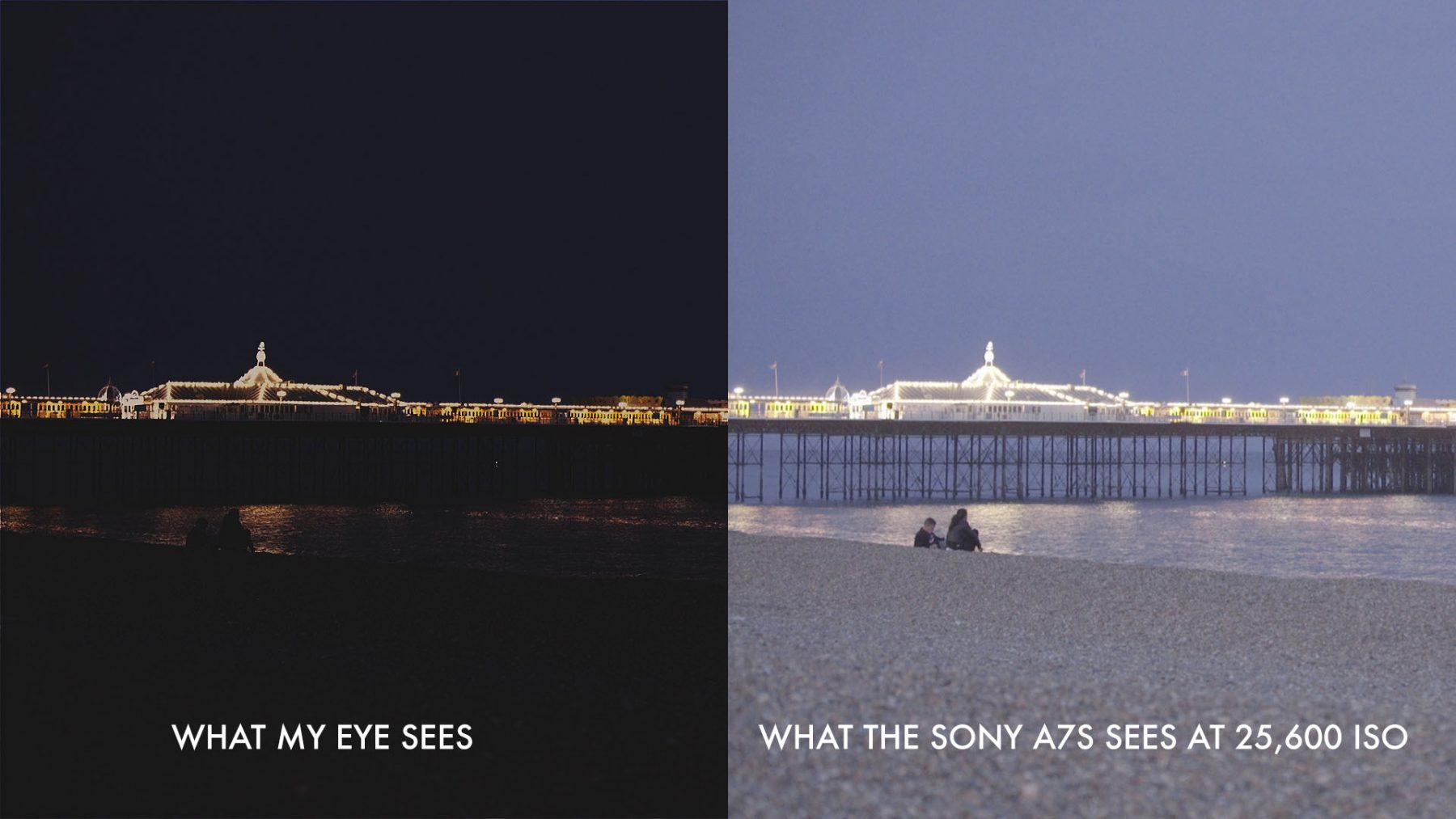 If you use any photos/ Screen grabs elsewhere, please credit philipbloom.net. Thank you!

EDIT: THE VIDEO REVIEW IS NOW UP ON IT’S OWN PAGE HERE!

With my GH4 review only just out, I am already started on my next one, the Sony A7s. As always, it’s an evolving one. Don’t expect the actual video review soon. I like to know the camera really well before I put them out, but I have been doing some filming already. The GH4 is still bloody awesome. This camera has a different killer feature…I do wish there was a camera that all of these killer features on one! The closest is probably my 1DC!

Before I get onto that, what exactly is so special about this camera? I am extremely choosy about which cameras I review. I have to be interested in them to put the huge amount of time and effort it takes to make them. If I have no interest in a camera, then I simply won’t make a review. They are occasionally subsidized by a dealer, never the company who makes them due to my ethics (this one CVP are subsidizing) but even then they’re 90% self funded. I am not sure they could stomach the actual cost of all the time I put into making them! 🙂

This camera is a low light monster. That is the feature that is killer. It also has amazing looking 4K, but not internally unfortunately. It has a micro hdmi port that outputs uncompressed 3840×2160 422 8 bit video (yes not 10 bit like the GH4).

It’s also full frame. I adore full frame. That’s a sensor FOUR time bigger than the one of the GH4 (although the GH4 can get to S35 with a standard MFT Metabones Speedbooster) That’s a huge difference of course. Although full frame has it’s downsides as well as upsides. Wides are easier to get on full frame, long shots? Harder!!

This is the third in the new Sony Alpha A7 line after the A7 and A7R. Both full frame stills cameras with nice HD video. I reviewed them here. The HD was nice, just not brilliant. Image issues were still present.

The A7s has a much smaller megapixel count than the other two, meaning it can soak up light a lot better, combined with excellent processing behind it. It has a 12.2MP sensor, the A7 24.7MP and the A7r a monstrous 36.4MP.

I love my A7r for stills and use it a lot, but almost never for video. In fact, the Sony A6000 has better HD video than it, but stills wise…

With this massively reduced MP count, you do reduce the size of the stills drastically. They are still big enough for most purposes, but your cropping ability is severely reduced from the A7R of course.

Sony seem to have really focused on creating the best stills camera video function possible. What is in this camera puts many much more expensive video cameras to shame.

We have a much improved codec over the old AVCHD codec: XAVC-s, the baby brother of the wonderful XAVC on my monster of a camera, the Sony F55. It’s 50Mbps and 4:2:0 8 bit. It’s very efficient, so it performs a lot better than you would expect for 50mbps.

It has S-Log and S-gamut. S-Log, though, works with a minimum ISO of 3200, which is problematic in daylight. It’s apparently where the camera performs best with its dynamic range. Personally, I would sacrifice a bit of that to drop it down by 3 or 4 stops. That’s why I use the Cine profiles, which are also very flat but let me shoot as low as ISO 100. I can still have S-Gamut colour though.

The 4K output is gorgeous. I managed to record some by sending the HDMI 2.0 signal into my Blackmagic Ultrastudio 4K box, which then goes via thunderbolt into my MacBook Pro Retina. Using media express software, I can capture live into different formats. I captured some ProRes LT 4k in my back garden just as a quick and dirty test. The garden super messy, as I had just replaced the shed and all its contents were in view, as they weren’t taken away by the rubbish clearance men until about an hour ago! But still all stuff to shoot!

So far I have only shot in the UHD mode. No HD, no slow motion. There is a lot to go through, and I need to make sur

You can download the 7gb clips from wetransfer here, or if you can’t cope with 4K ProRes LT you can pointlessly watch the compressed to hell streaming version. This is fine for normal watching but not for pixel peeping. Vimeo compressed the 7GB 4K file down to 78mb with a surprisingly low bitrate of around 3.6Mbps. Normally it’s a bit higher than that.

The GH4 has a killer feature that this lacks. Internal 4K recording. I love internal 4K recording. I put up with external recorders because I have to. I don’t mind them as much if they double as a great monitor like the Odyssey 7Q and forthcoming Atomos Shogun, but sometimes I don’t want to use a monitor. I want to stay small. I wish the A7s had the option to record a lower quality 4K version like the actually rather good Sony AX100, but it doesn’t. There is simply no way it can cope inside that body with the heat. As it is, when in 4K mode, it does get warm to the touch! That’s the problem with not redesigning the body to cope with it but just using the A7 shell. 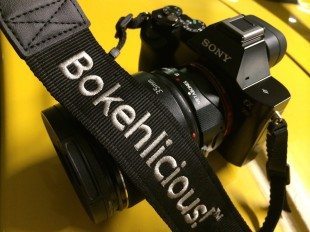 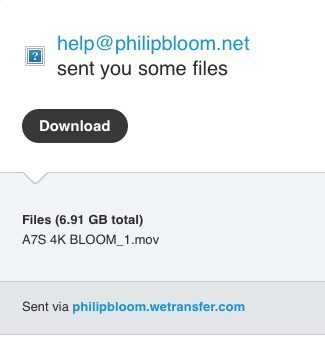 The very first test I did was of course low light. I did that almost a week ago. I filmed myself lighting up a cigar. I don’t actually smoke that much at all and never in my house but I wanted to see the room light up with the match and it did indeed. Below are frames from video in HD of 80,000 ISO! 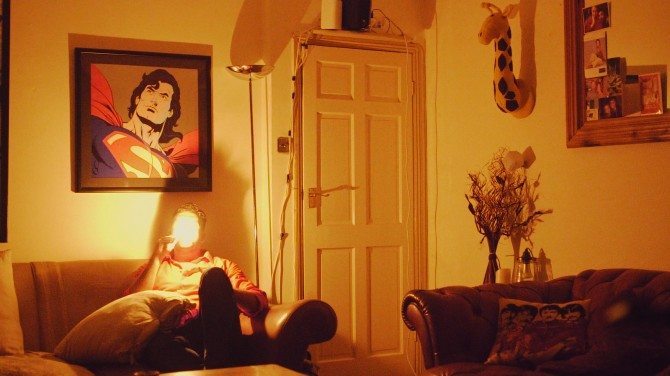 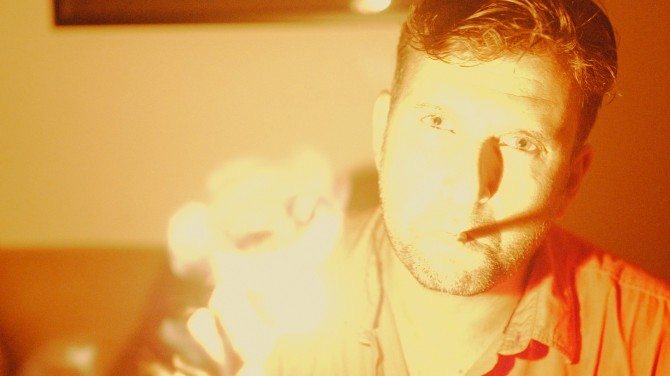 The video of this will feature in my actually video review.

Last night myself and James Miller went down to Brighton for a change to test out the low light again. We both couldn’t wait for the UK release of the camera and picked them up from DigitalRev. I made sure that they were world cameras. Apparently there are some which are region locked. The one is the US are definitely region locked, so only 24p, 30p. Not 25p. No use to me. Be careful when ordering if you need a world camera.

I brought the camera down, 5 batteries (it’s really quite hungry battery wise, especially compared to the GH4, but not Blackmagic hungry!), my Sigma ART 35mm and 50mm F1.4, 70-200mm Canon IS II and my Canon 24-70 L II. Tripod was the Really Right Stuf FH-350, which is really lovely. More on that in an updated post.

I don’t like the rear screen of the camera, the EVF is much better, though not really practical for tripod work as it’s fixed. I am using the Small HD DP7 PRO High Bright monitor these days, and it’s a stunner. I can see the screen perfectly in direct bright sunshine. No good for my low light test, as it would light the beach up! Instead I brought the DP4. It’s ageing now but still nice. A bit chunky as an EVF but works great. I love the ability to flip open and have a nice decent little monitor. Whereas my Zacuto EVF, which is great, is too small to use like that. Great through the Z-Finder though.

Something very special I took with me was my new special edition “Burl Wood” Kessler Crane Pocket Dolly. Super Pimpin’! Really quite nice! I got some lovely shots with it indeedy!! 🙂 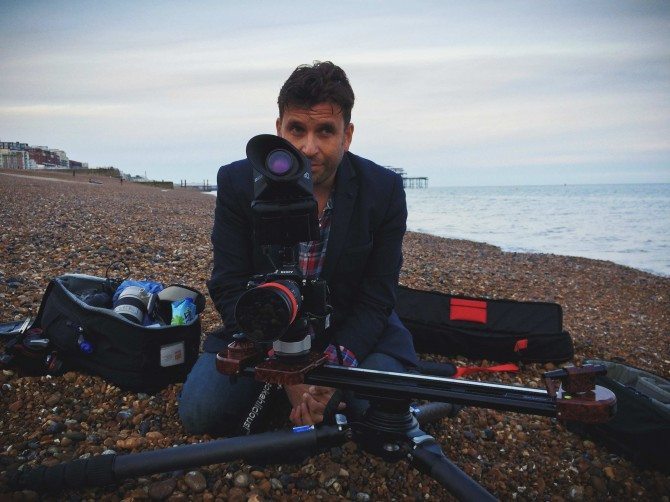 Some people ask why shoot such high ISOs. What is the point? Well there are many many creative reasons. Yes, I can’t see me wanting to shoot night for day very often (!) but what I would like to do is shoot in low light situations with a deep depth of field. Not always be at F1.4!

The danger of course with high ISOs shot to make things really bright is when you see any lights in frame. These will blow out a lot. That was why there was no point going to London to shoot high ISOs. I could have stopped down for that deep depth of field, but I wanted to see what I could actually see with this camera when pushed.

To get an idea of just how much the street lights looked when exposing for some of these shots look at this frame here. Hence I pointed away from the street most of the time, only when it wasn’t pitch black 1 hour past sunset could I get bits of the promenade in frame. 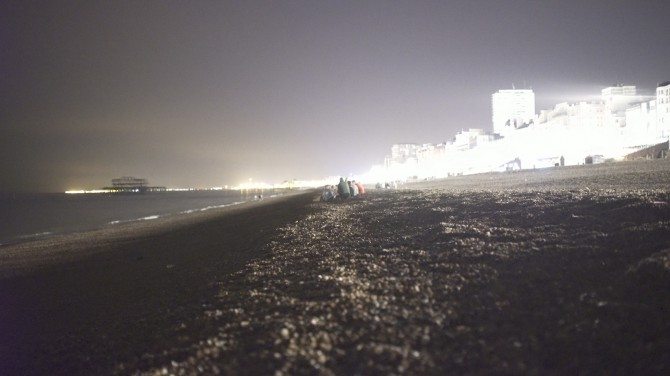 It was incredibly dark out there so even though I could see everything way better than my eyesight could some of the shots with dark area in them were just too noisy not to fix. I used the ever marvellous Neat Video to get these results.

As mentioned at the top of this post, if you do use any of these grabs/ photos elsewhere please credit “Courtesy of PhilipBloom.Net”. Thanks!

Yep. Ridiculous but I had to try this out as the rolling shutter issues are redcuced in the A7s crop mode.

Speedbooster is of course designed to make smaller sensors look and perform like larger sensors. The E mount mount is for cameras like the FS100 / FS700 and of course any of the APS-c Mirrorless cameras. It’s a terrific bit of kit.

I show a comparison between detail and rolling shutter in full frame mode, crop mode and speedbooster in crop mode. It’s crazy that I am even doing this but I had to and the results are impressive. The size of the noise though is enlarged in crop mode.

This won’t work in 4K output mode as the sensor is sampled 1:1

Feel free to download plus and pro members but if you use any of it please credit “Courtesy of philipbloom.net”

Recorded on an Atomos Ninja Blade in 422. The download is also Prores 422 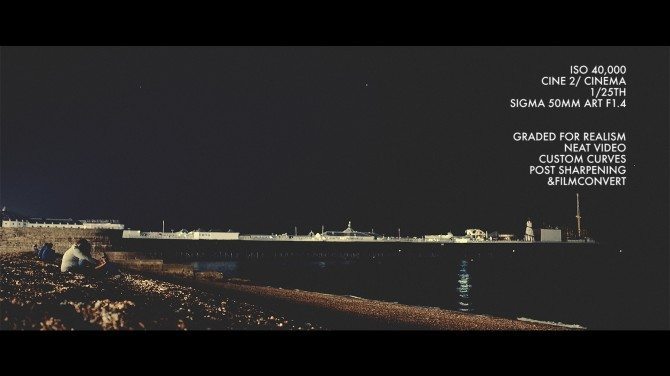 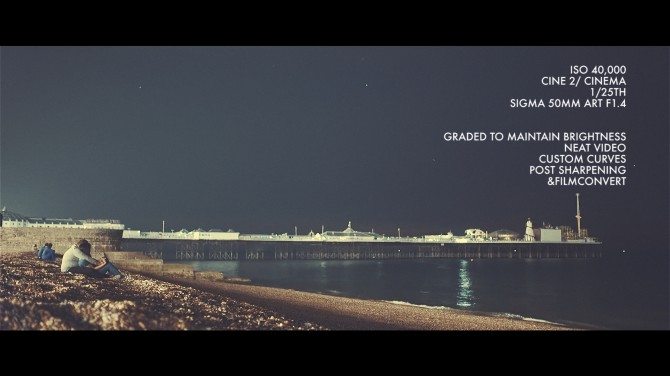 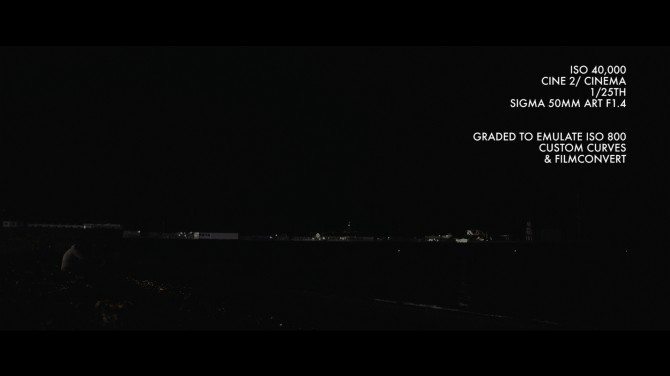 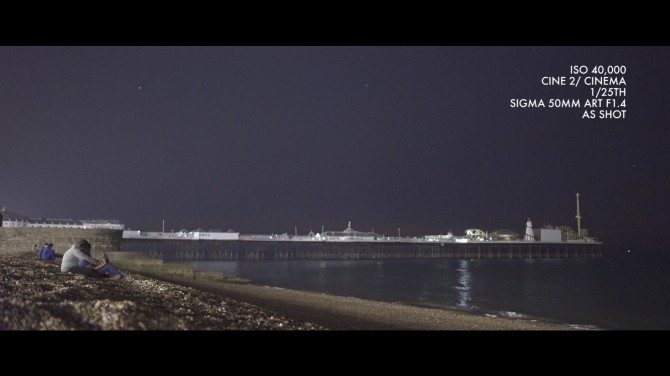 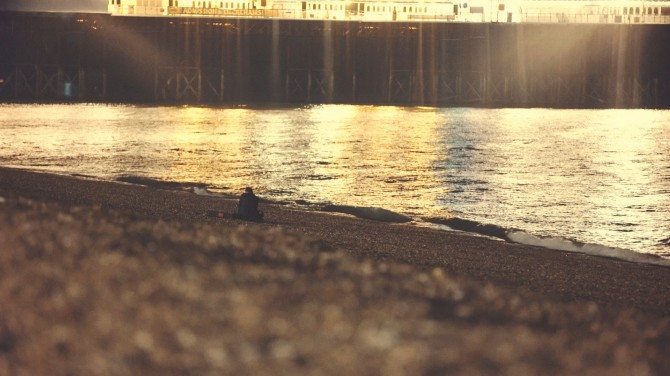 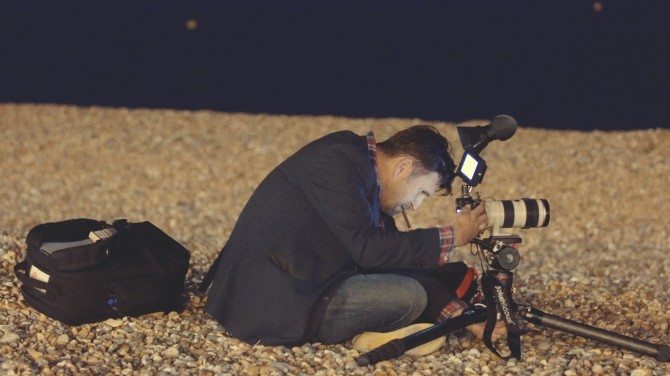