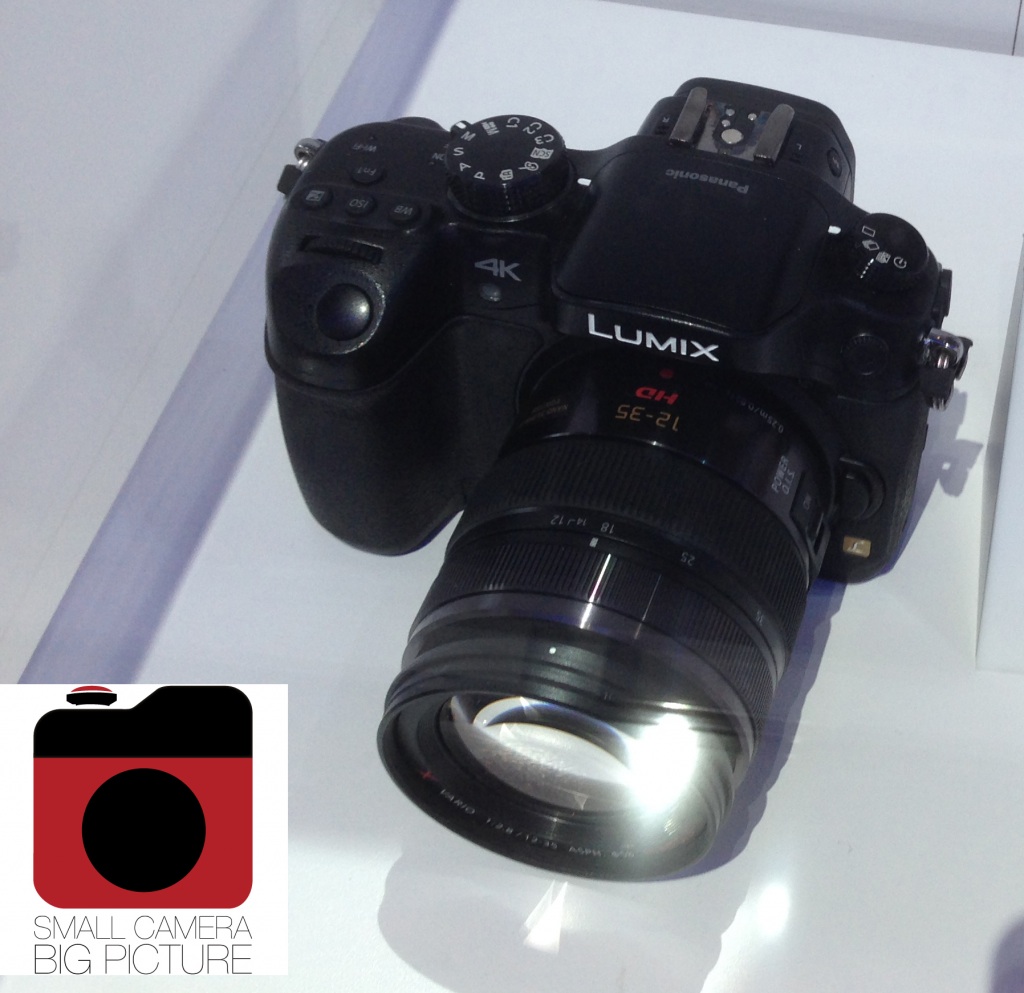 This isn’t a rumours site, or a news site. There are way better places to go for those things. The best news site out there is easily NoFilmSchool.Com. They have staff and post multiple times a day. It’s just me here, so I am lucky if I can post once a week, as the day job of shooting gets in the way! That’s why I try to make my site have content not on other sites. That being said, every now and then stuff happens that I want to talk about.

There have been rumours of a 4K GH4 for some time, but I have refused to comment about it purely because there is little point until we get confirmation. Again there are dedicated sites that are fun to browse to see “what may be”. Now with CES in Vegas going on (I almost went this year, but I think one trip to Vegas is enough for most people, it is for me!) we have at least 2, probably more 4K cameras out in the open. One of them being the first official sighting of the GH4 (Although this pic looks like a GH3 with a 4K badge stuck on) I want some of those to put on all my cameras!

This is the most interesting 4K camera to be seen there even though there is no price, no official full specs, no release date. Just a camera in a glass case. So the specs I am about to list ARE rumoured. I know, I am sorry, but it’s all I have to offer and if I am mentioning the confirmed camera there needs to be something else…but as soon as I get official specs I will change this.

All these sound very interesting. As it is another stills camera that can shoot 4K, joining the 1DC in a very exclusive club.  I am assuming this is a MFT camera – after all, it says GH. This is fine of course, as there is a fine collection of MFT glass out there and a lot of people love the format. I personally prefer larger sensors of S35 and up, but that’s just me.

We are still waiting for Panasonic to deliver a truly wonderful large sensor video camera. The AF100 is old and wasn’t brilliant. There are rumours…but you know how I feel about rumours!! 🙂

It will be interesting to see what this camera is actually like image-wise. The rumoured specs sound good (4K at 30p only though?)

One of the things I am most curious about is what the actual HD image is like. After all with these 4K cameras popping up, and I am sure many more will follow, I ask the obvious question, “Shouldn’t you get your HD image right first?” The GH3 does have one of the better HD images out there, but it does have image issues. In fact the only stills camera with an HD image that looks as good as an image from a C300 is the 1DC’s Super 35mm mode. It’s astonishingly good.

The thing is, 4K down sampled to 2K/ HD generally looks way superior to normally captured HD images. Part of the reason why the C300 HD image is so fantastic is the 4K sensor inside it. What this COULD mean (what is most exciting with these 4K cameras coming out) is we may actually start to see really fantastic HD images finally.

I love my Sony A7R camera (reviewed here) but the quality of the HD image disappoints. Not as detailed as it should be, and there are image issues. This is the issue with stills cameras that shoot video. So let us hope this obsession with 4K could FINALLY bring us stunning HD. 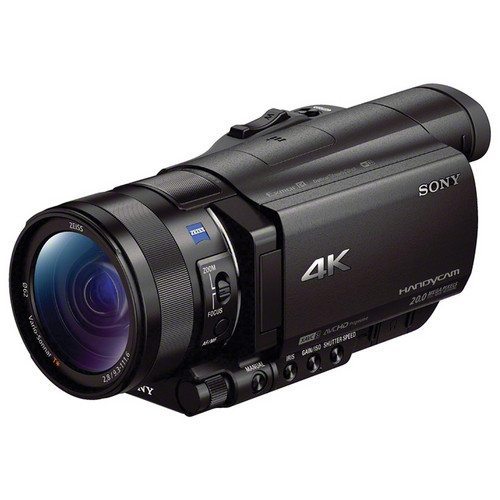 The other camera is the FDR AX-100. It’s dirt cheap for a 4K camcorder. It has a small sensor though, of just 1 inch…but it is a prosumer camcorder after all and it shoots 4K in the new XAVC-S codec that Sony are to implement into all their current AVCHD cameras. 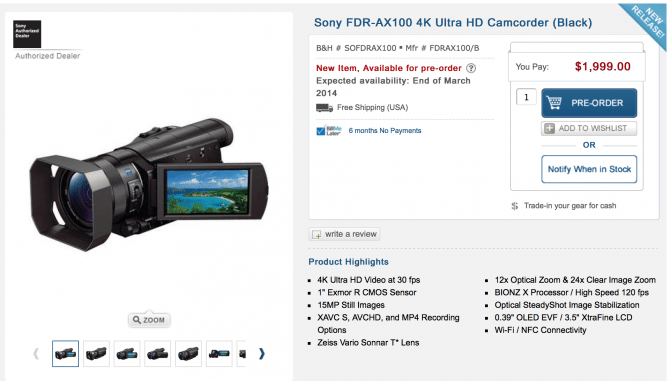 This one in a way actually competes a bit with the RX10, as it takes stills too but also does high-speed and of course 4K. Is it any good? No idea. The video below looks very good when you select the UHD resolution and go full screen. Oodles of detail and in the below video! Even streaming it looks good. I am going to download the 4K version and out it on the big TV.

I am intrigued by this camera though and will try to get Sony or B&H to get me a loaner! 🙂

So yes, 2014 is the year of 4K it seems…especially with the affordable 4K with the Blackmagic Production Camera 4K due out anytime from last summer onwards 🙂

Do we need 4K? Well I have done a blog post that I should update really  that addresses that. Look, I love 4K. I love the detail I get and I especially love the ability to scale down to a stunning HD image. Also the ability to crop in incredible ways in post, as shown in my “Chicago to the Moon film” and the accompanying blog post showing this creative aspect of 4K, make the new format very attractive. It’s just the whole “do we need it?” question.

Proper usable 4K needs high bitrates, which mean expensive fast cards for one. More time in post to deal with it. Most companies I work with can’t handle it. Most importantly though, there is no easy way of showing it yet. There are no 4K channels, no 4K BluRay players. Netflix is trialling 4K, but what will the bandwidth be? Plus, not many people have 4K TVs. Very few in fact. I do have a cheap Seiki 39″ UHD TV in my edit suite and this is pretty nice and DAMN cheap! They also do a 50″ one.

I am lucky enough to also have a lovely “Proper” 4K TV (which ironically cannot play my 4K video footage from my Samsung Galaxy Note 3!)  When I pump my 4K work into it via a 4K media player that I have, it looks stunning…if I sit close enough to the TV. If I sit on my “TV SOFA” I can’t tell the difference. Check out this chart to see why. 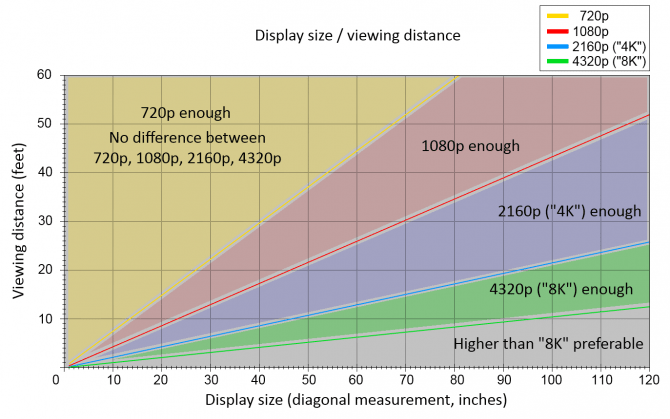 Doesn’t stop me shooting 4K though and even starting a new 4K channel on Youtube and very exciting for me, launching a Vimeo travelogue account which is going to be almost all 4K stuff (although vimeo doesn’t display 4K yet, the downscaling is gorgeous and all the videos can be downloaded in 4k)  You can see those gorgeous (am I allowed to say that about my own work?) 4K travelogue videos in this post a few lines down! These are shot on my wonderful 1DC. I love the 4K image from that, despite its limitations codec-wise. Shoot it well, expose right and the results can be utterly incredible. My thoughts on 4K are a little bit confusing aren’t they? 🙂

For my clients though? 99% want HD and they want GREAT HD, so that means video cameras for the most part. I hope with this movement to 4K video shooting stills camera, we can finally get what we have wanted ever since the 5D2 came out. True wonderful detail HD images! 🙂