Simply download the file, stick it on a compact flash card. Make sure battery is fully spammed up and not almost out of juice, go to menu, select firmware then click update. Simple!

I have been lucky enough to have played with the new firmware for the Canon 5DmkII over the past couple of weeks. It has utterly revitalised my love for the camera. The 30p has always been a problem. it’s a frame rate that is of no real use to me as I need 25p or 24p for my work. Converting your rushes from 30p is more than a nightmare, it take forever so I usually cut in 30p then convert the finished edit, fine for your own project but now so great if you need to hand over rushes to a client. This can take sometimes over a day depending on how long your rushes are.

Because of this I pretty much shot all my work, especially my paid work, using the 7D as it had the frame rates I needed. A shame as I prefer the full frame look and the 5DmkII is better in low light than the 7D.

Canon announced at the end of last year that they would be bringing 24 and 25p to the camera finally but didn’t announce a date. Well that day has finally come! 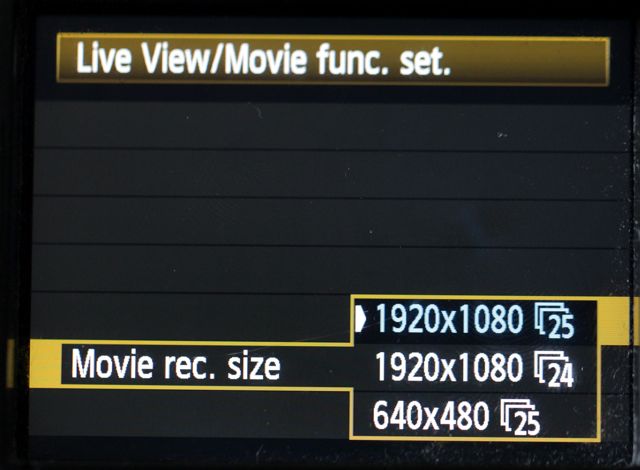 The downside is there is no 720p 50p or 60p mode. Probably due to overheating issues? Just 23.98, 25 and 29.97P. Bu we also get live histogram and very importantly the ability to turn off the auto audio control. We now have manual control over our audio, albeit not in the easiest manner. You have to go into the live view settings, select the manual option and once there you see audio meters! Yes audio meters..you can set the level in fine increments to what you want. The downside is you cannot change the levels or see the once you start recording as you can only see them in that menu. Go back into live view and you lose the levels and the ability to change them. We also still don’t have a headphone jack so monitoring is out of the question, but we now get 48Khz sound instead of 44.1 Khz. To access 30p select NTSC from the menu, to get 25p select PAL from the menu. 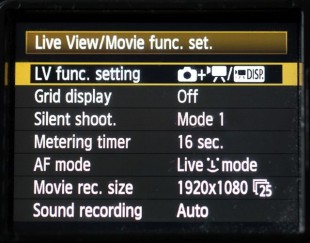 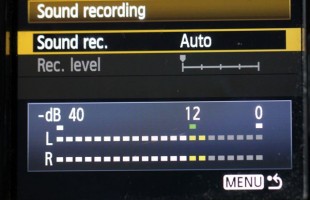 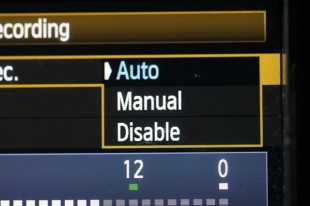 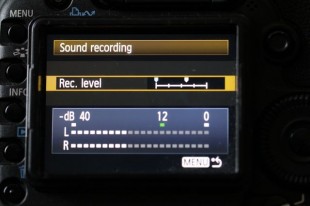 Other good news is we have increase in recording bit rate to around 44 mbits now, up from around 38 mbits.

The 24 and 25p out of the 5d is just beautiful. Much better than trying to use a convoluted workflow from my tutorial section!

So which camera now…are you confused? I am!

I still love the image out of the 5DmkII the best but the 7D still has more frame rates and doesn’t have the issues of 480p recording monitor out. So…you need to decide what is the most important thing for you…The 7D image is still spectacular. Just a bit different to the 5DmkII. It comes down to your desire for full frame and your love of the different aesthetics of each camera.

I have shot three little shorts with the new firmware, first up is another relaxing beauty piece of the grounds around and above Skywalker Ranch, cleverly titled “Above Skywalker”. It is shot with the 24p 5DmkII and of course includes some nice timelapse. What is exciting for me is I used my new Kessler Crane Motorized Cineslider to get motion controlled timelapse. Makes a huge difference. I will do a blog tomorrow all about that. It’s a prototype so not for sale yet. The blog will have all details you need.

I also used the new compact pocket dolly with crank. I don’t think the crank is that useful but having the crank belt makes it super smooth and also dampens the moves nicely. Perfect size and exceptional performance. 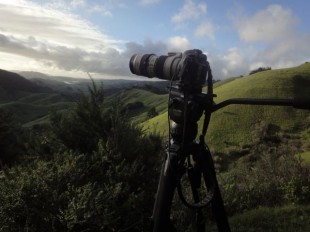 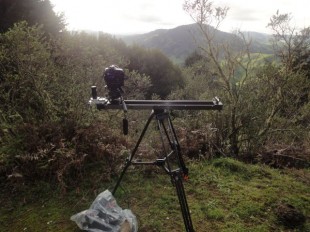 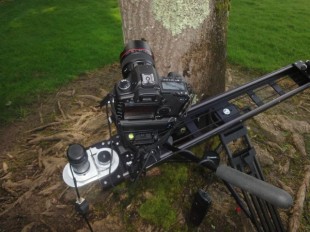 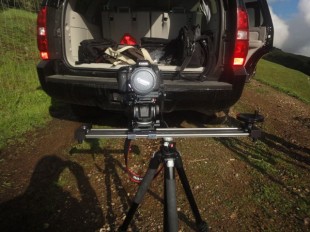 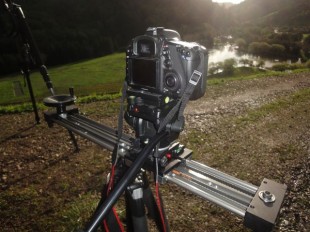 What I wanted to do with this piece was just to take in the majesty of the surrounding area. It truly is breathtaking and this video doesn’t anywhere near do it justice. It’s so epic, serene and peaceful up there. Truly wonderful.

The second is a music promo I did for local Austin band Monarchs’s singer Celeste Griffin. Celeste sung an acoustic track called “Miles Away” at the FCPUG party the other night and I got some shots of her singer and suggested that we try and do a spontaneous music promo for it as I liked the song so much. So I took her onto 6th street outside the bar and got her to lip sync the song a few times and just get some general B-Roll of her. We weren’t out for much more than 40 minutes doing this.  I used just available light, nothing else.

I asked her if she could record a studio acoustic version of the song the next day and to meet me for the golden hour by the river to get a few more shots.

So with the enormous crew of just me, we went out and shot a music video for about 1 and half hours in total. For the golden hour stuff I had the track on an iphone and Celeste lip synced to it. So simple and so easy.

I added some simple reverb on the live shots to make the audio sound more “live” but took it off for all the other shots.

It was handheld all the way using the Zacuto Tactical shooter and Z-Finder and just one lens, the Canon F1.2 L 50mm with a 72mm Fader ND. Really simple and really quick to shoot!

Please ignore the 7D strap in these pics…I needed a strap and I couldn’t find my usual one so I ripped it off my 7D to stick on the 5DmkII. 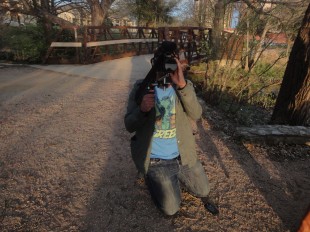 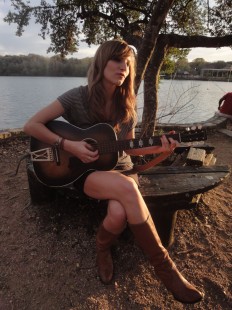 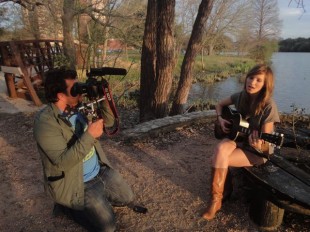 Last but not least is my little film of Sutro Baths, this has been up a couple of weeks but I never said what frame rate it was shot on and nobody guessed. One person came close but close enough.

Here is goes incase you missed it

Sea from Philip Bloom on Vimeo.

Music by James Newton Howard from “Lady in the Water”

First section of water has no colour correction and is straight out of 5D. Shot of people in cave on is graded using Magic Bullet Looks (get 20% off with code bloom20 at www.redgiantsoftware.com)!